Westville Gets A Snowmage To Bernie Sanders 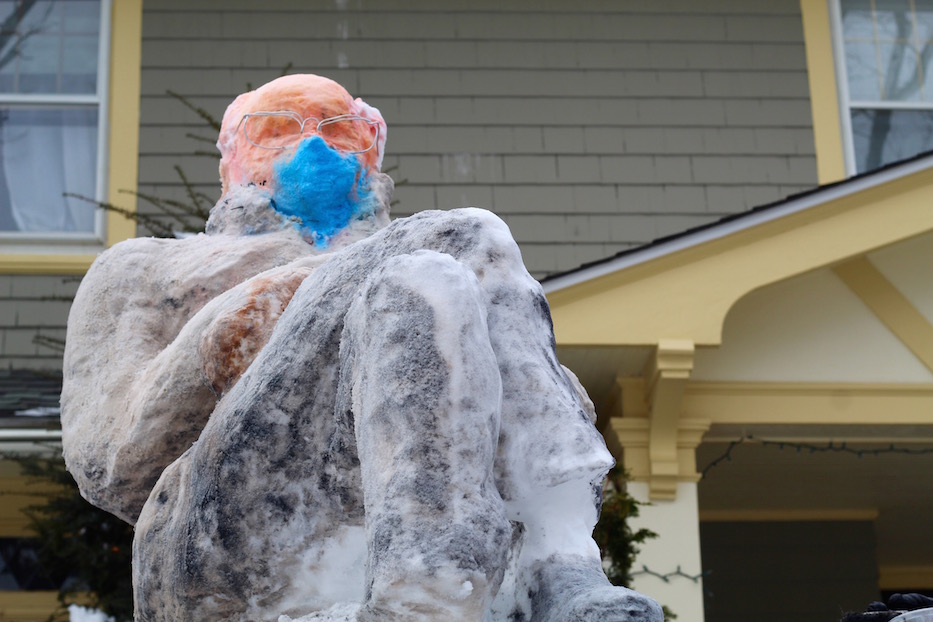 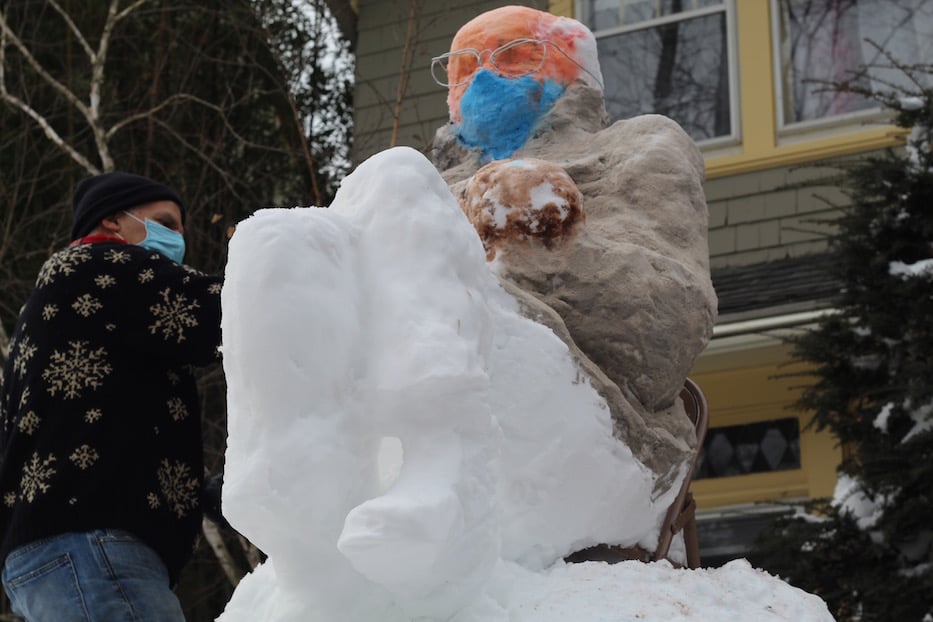 A familiar face looks out onto West Rock Avenue. He’s relaxed, legs folded atop each other as if he’s got nothing but time. Two mittens peek out, thick enough to shield him from the bitter cold. From just above a blue face mask, peach-colored skin and two tufts of bright white hair complete the look.

Westville snow sculptor David Sepulveda has returned with a ten-foot homage to U.S. Sen. Bernie Sanders, whose wooly mittens and cold-weather casual attire went viral after the Inauguration of President Joe Biden and Vice President Kamala Harris in January. Sepulveda started the sculpture in his front yard Tuesday morning. He expects to be finished by Wednesday night.

“It was a matter of me not being able to deny the perfect conditions any longer,” he said after a full day of snow sculpting on Tuesday. “The snow was very textured, and very pliable. I always like to choose a theme or subject that is pretty positive, and the Bernie meme was circulating all over the place. It really felt like something that was lighthearted and fun.”

For the artist, a 36-year veteran of the Stamford Public Schools, the sculpture has been a long time coming. During his childhood in the city’s Rockview and Brookside public housing projects, Sepulveda loved “the big snows” that are now part of New Haven history. When he began working as a visual arts teacher in Stamford, he learned to cherish the occasional snow day. It was, perhaps, only a matter of time before chilly creations started showing up in front of his home, where he and his wife have lived for 33 years. 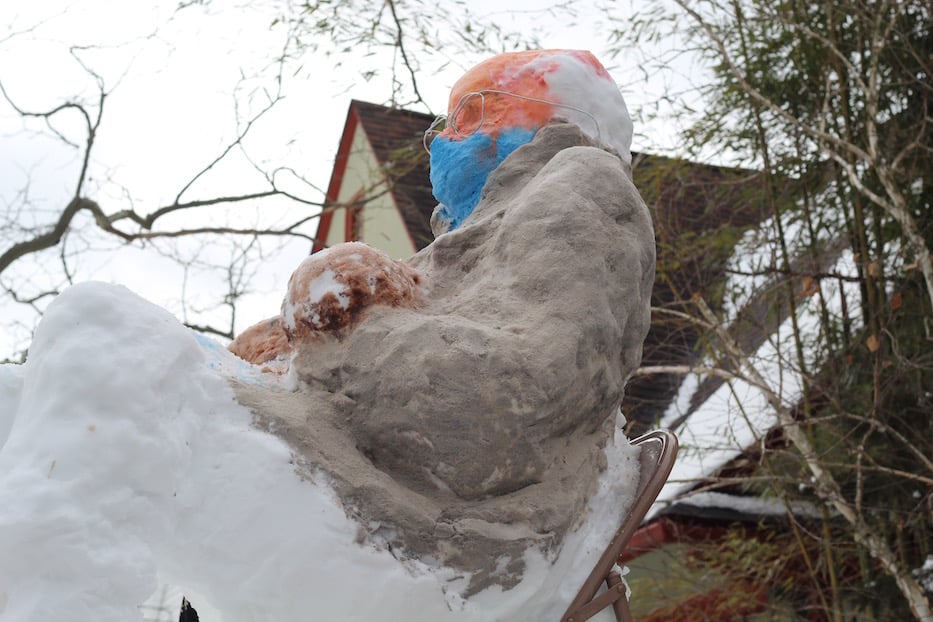 A decade ago, Sepulveda delighted the neighborhood when a multicolored, psychedelic Snow-a-saurus popped up in his front yard. Then came a blue-and-green whale for the Hartford Whalers, smiling between its snowy lips. In 2014, cold weather conditions led to his Snowbama, followed by painted snow hearts for Valentine’s Day. In 2017, he offered up a snowy Buddha as a sort of peace offering during the early days of Donald Trump’s presidency.

In recent years, he’s waited for the right snowy conditions to reappear. When they did on Monday, he started thinking about a sculpture that engaged with the present moment, and lifted his neighbors’ spirits. While he was initially hesitant—he threw out his back and hip last year, while moving a set for Collective Consciousness Theatre—he said he felt like there was an expectation. He’s hopeful that the cold temperatures hold for just a few days, so that the sculpture doesn’t melt immediately.

Bernie struck him as the right theme at the right time, he added. The two have some sartorial overlap: Sepulveda’s snow sculpting outfit consists of paint-splattered jeans, a well-loved black and white Nordic sweater with big snowflakes, a knit cap and heavy boots and mittens. He has a no-nonsense approach that involves two ladders, several gardening tools, takeout containers repurposed for paint, and a large snow shovel. 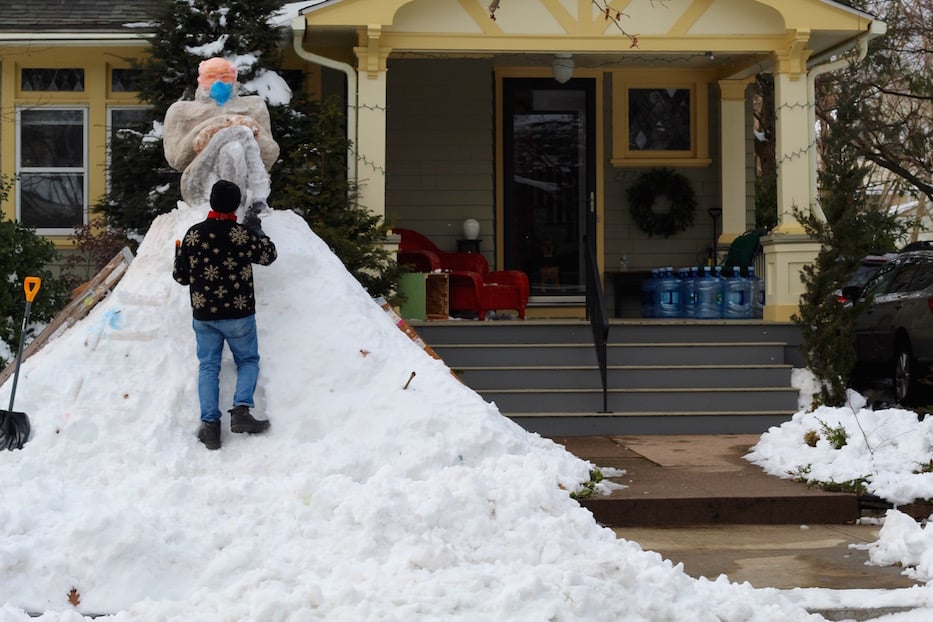 Sepulveda also has a soft spot for the senator, whose vision for Medicare for All, cancelling student debt, and higher minimum wage has long resonated with him as a lifelong artist and educator. He supported Sanders’ candidacy for U.S. President in 2016 and again in 2020. In April 2016, he was one of 14,000 people who gathered on the New Haven Green to hear him speak.

Now, a cheery sign for the Biden/Harris presidential ticket stands in his front yard, dwarfed temporarily by a snowy democratic socialist. When it looked like Sanders would not be the nominee last year, Sepulveda threw his support behind them. He said he’s still eager to see what those left of center accomplish with Trump out of office.

“Early on, when I saw that the Democratic body politic was leaning towards something more electable, I hoped that Bernie wasn't going anywhere and neither were some of our other friends on the left,” he said. “And in some ways, it's happened.”

The sculpture itself is huge, although Sepulveda expects that it may shrink as temperatures rise above freezing in the next few days. He began the piece on Tuesday, after a storm that dumped 15 inches of snow on New Haven. He knew he wanted it to be on a pedestal, playing on the monumental nature of the meme while also making Bernie visible to the street. He steadied a folding chair atop the mound, and then got to work on the senator. 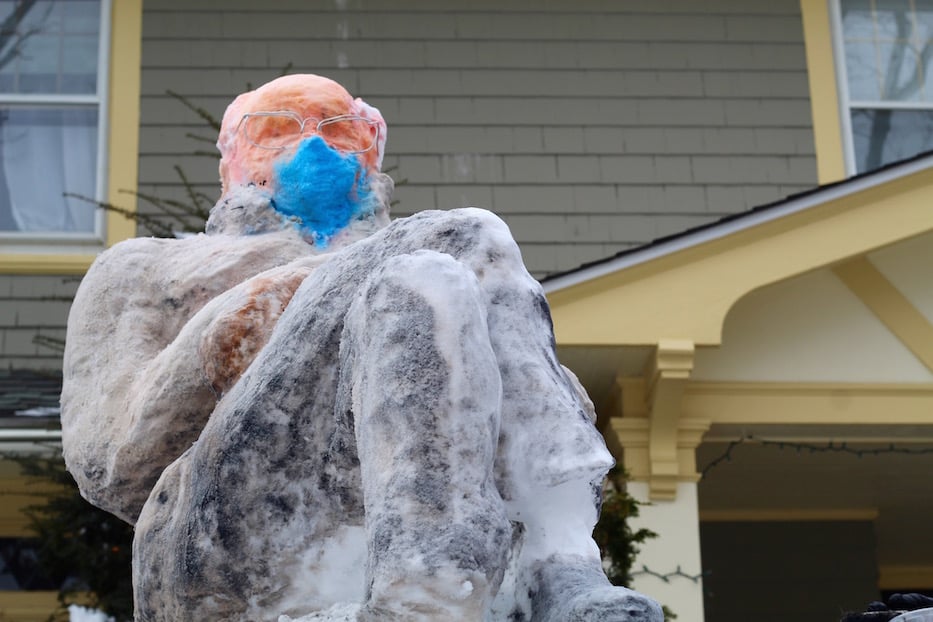 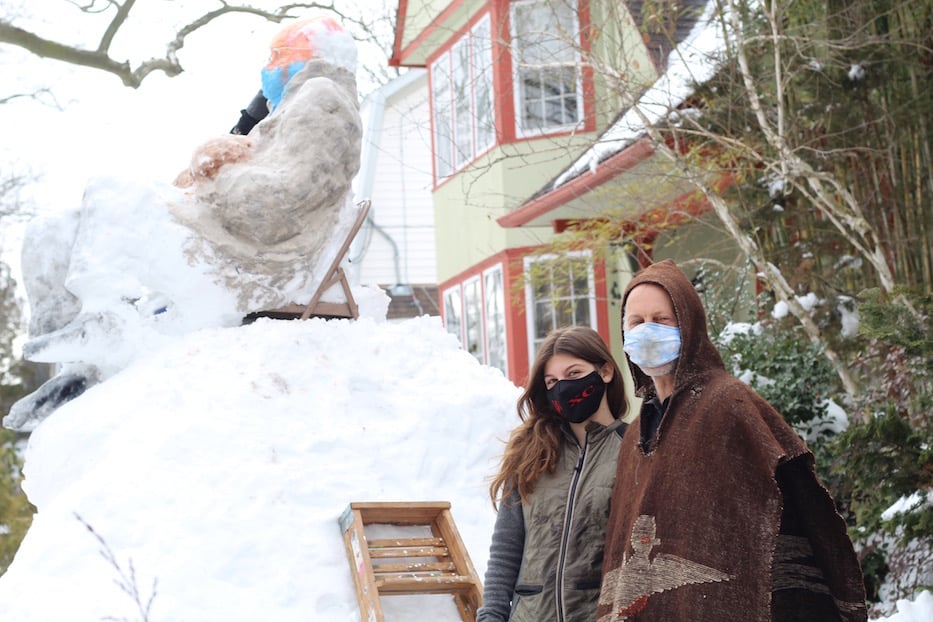 While he usually works by himself, the project became a way of connecting during Covid-19. From down the street, neighbors Karl Mini and his daughter Rosie saw him at work and brought over an extra ladder. The two stayed to pack some snow before pulling out their cross-country skis. Sepulveda joked that his approach is a little “Rodin-esque,” with rough edges that still communicate the image.

On Wednesday, he added coats of watered-down acrylic paint and a pair of heavy wire glasses. He said that he’d tried to stay as true as possible to the original image, a now-viral photograph by Connecticut born-and-raised Brendan Smialowski. As he worked, the snow absorbed the paint, changing color before his eyes. Every few minutes, a driver rolled to a stop in front of his house and pulled out their phone. Some parked their cars in the street and got out to take a closer look.

“That’s talent, man,” said a driver as she dashed from an Amazon Prime truck to a nearby house. “That’s talent. Y’all have a blessed day.”

“You’ve outdone yourself!” shouted another neighbor as she walked her dog on the snow-lined asphalt. “That is spectacular.”

Sepulveda said he thinks of the sculpture as part of his wider contribution to public art in the city. In November, he installed his piece “Full Circle” outside of a house at Central and Willard Avenues, in a nod to the artist Louise Nevelson. He is also an active member of the board of directors at Site Projects, Inc., and assisted on artist David de La Mano’s mural installation in the Ninth Square last year. 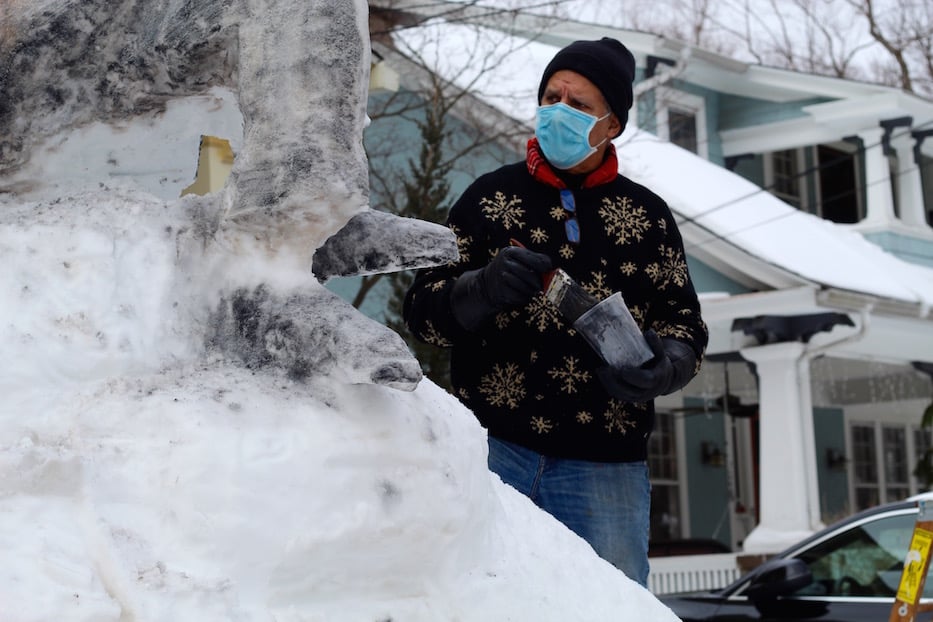 He acknowledged that the snow sculptures are different, because they’re ephemeral. In 2014, he watched as part of Snowbama’s face caved in, and a row of icicles appeared on his head. It was "horrifying" to him, he said—but not enough to warrant an intervention. The process of melting and refreezing is part of it.

Rhianne Christopher, who moved onto West Rock Avenue in August of last year, stopped by on her walk home from Aquila Motors down the street. An art teacher in Wallingford’s elementary schools, she said she was excited to have stumbled on the piece. She waved to Sepulveda, the corners of her eyes crinkling to show a masked smile.

“It’s fantastic,” she said. “Bernie has been everywhere, and now we get to see him in our neighborhood.”