Friday afternoon, over 300 sanctuary city advocates, members of Unidad Latina en Acción (ULA), faith leaders and New Haven Public Schools (NHPS) and Yale University students gathered at First and Summerfield United Methodist Church to rally and march for Nelson Pinos, an immigrant who has been seeking sanctuary there since November 30 of last year. Friday marked day 281, or month nine, of his stay inside the church. 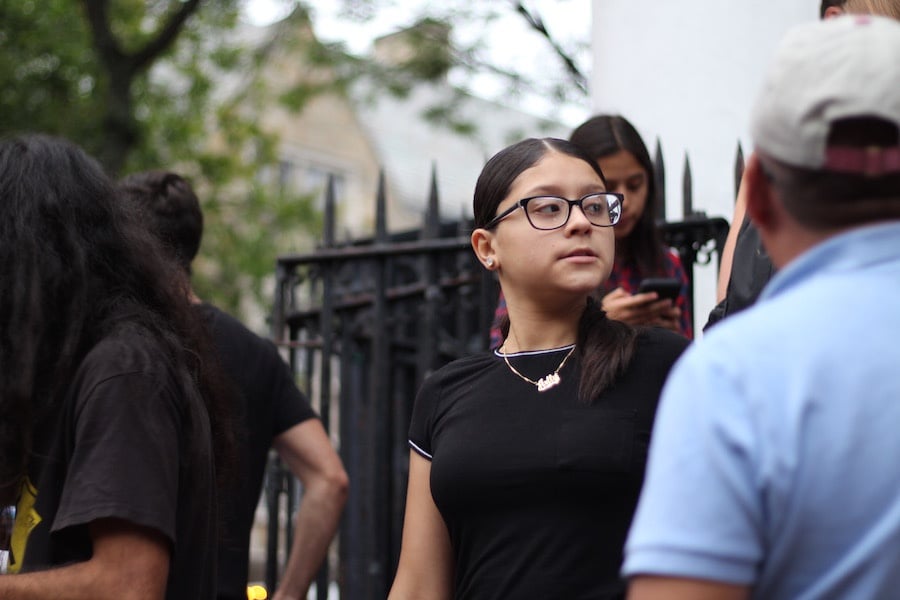 Last year, Pinos took sanctuary at First and Summerfield after a deportation order from Immigrations and Customs Enforcement (ICE) ordered him to return to his native Ecuador after 25 years in the U.S. In the nine months since, he has missed holidays, bedtimes, first days of school, homework help, and a chance to sleep in his own bed, cook in his own kitchen, walk outside, and attend a job that had been providing for his family. In an interview earlier this summer, he spoke about the emotional and psychological toll it has taken on him, his wife and their three children.

Now at both the nine month mark and beginning of the academic year, organizers are working to maintain and grow momentum around Pinos’ fight to remain in the country. As longtime organizer and ULA member Jesus Morales Sanchez reminded the crowd that “no one is illegal on stolen land,” attendees attached pieces of paper to their shirts, each bearing a number up to 281. Several hoisted up handmade signs in English and Spanish, with messages that included “Stop Deportation,” “Todos Somos Humanos,” and “Fuck La Migra.”

“Every day I cry and cry,” said Pinos' 13-year-old daughter Arley. “I can’t sleep at night. My father hasn’t done anything wrong. He crossed an imaginary line … and now he is treated like trash?” 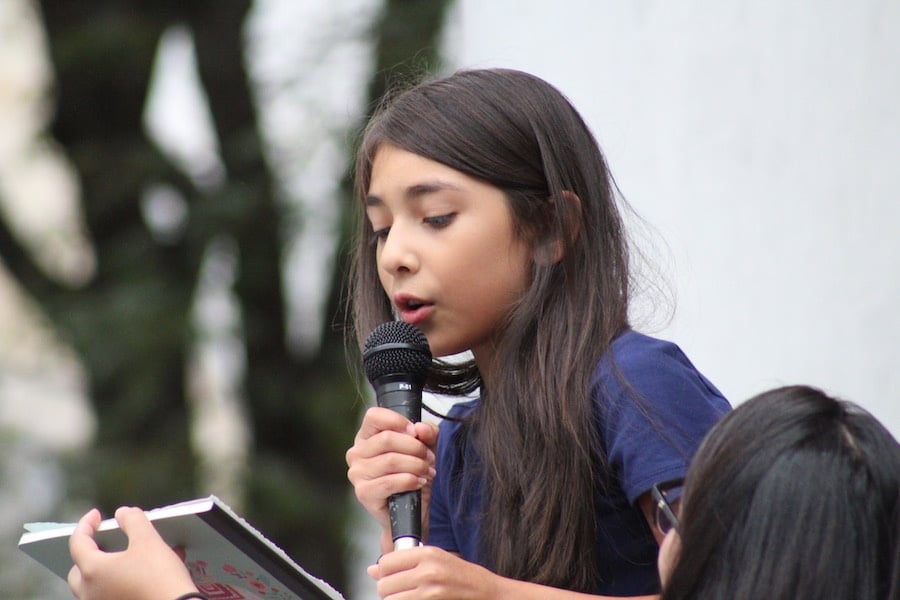 Speakers urged members of the crowd to take action, call their representatives, and push fellow colleagues and students to get involved. Several, like 11-year-old Ambar Santiago Rojas, told the crowd that living apart from her immigrant parents for nearly a year—or even a number of weeks— would kill her.

"Nelson has been in sanctuary for not a month, nor two months, but 281 days," she said. "Almost a year not being able to sleep in his own home, help his kids at home. Almost one year of being treated like an animal in a cage. That is slowly killing his kids. But I'm not gonna let that happen to them, and I want you guys to help me out with that!"

Others, like Wilbur Cross student Carlos Romario, spoke of the pain and fear of being undocumented under the Trump administration. In between chants of “Free Nelson now!” and “Dignity for Nelson!” ULA members called for more rallies, school walkouts, and increased time with Pinos and his family in the church. Led in song between remarks, members of the crowd flowed into son jarocho, singing "Me gusta/ la lima me gusta/ limón/pero no me gusta/ la deportación!"

“This country has gone way too far in what it will tolerate in the name of law and order,” said Tina Colón Williams, Pinos’ lawyer and a pastor at Elm City Vineyard Church. “It has lost its respect for humanity … let us refuse to tolerate the status quo, because it is not okay.” 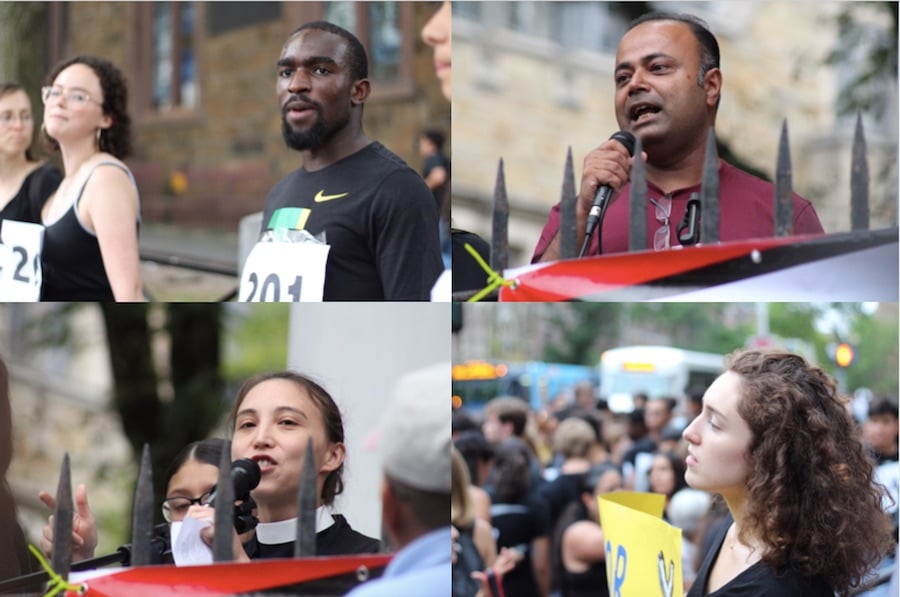 Taking the mic, Yale students Larissa Martinez and Lucy Sternbach asked their peers to step up, noting the role that an ULA-student partnership played in Yale’s decision to rename Calhoun College in February 2017. Martinez, who came to the U.S. from Mexico in 2010 and is now a junior at Yale, focused specifically on her white and American peers. She recalled telling several of them about the rally, only to hear that they had homework to do, or a football game to attend.

“Being undocumented in this country is really, really hard,” she said, speaking about her own experience as an undocumented Latina in the U.S., often exhausted by the emotional weight she must carry alone. “Please pick up that labor … if we all joined in, we could literally change someone’s life.”

From The Church To The Streets 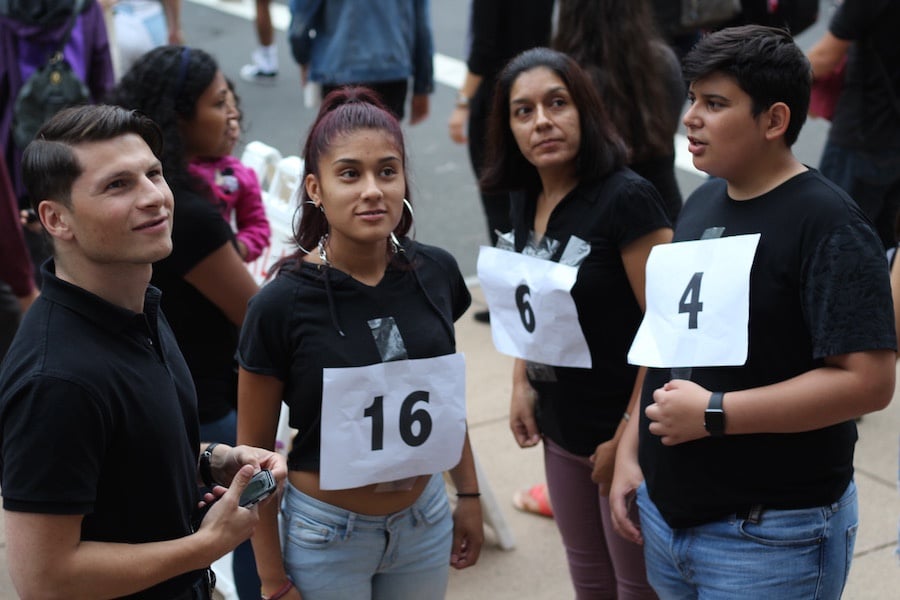 As they concluded remarks, attendees hurried across Elm Street, forming a line that started with the number one and went up to 281. As they found their places, activists and students formed a chain that hooked from College Street around to Temple, weaving around its bus stops and by benches. Passing drivers honked to show their support, a few rolling down windows to pump their fists and cheer. Near the intersection of College and Elm Streets, 16-year-old Kelly Pinos (pictured above) crossed the street with her mother and Romario, then looked for her place in the line.

“For me it’s been really hard,” she said, a paper with the number “16” taped to her shirt. “It’s been nine months where I have to go back home without my father coming with us. There’s days when I don’t even see him, because I do work, and I’m in school. Financially, it’s been really hard because my dad was the sole provider of our house. It’s been messing us up mentally in all different ways.”

She recalled a recent discussion with her father, in which he encouraged her to pick up a fall sport at Wilbur Cross High School, where she just began her junior year. Kelly hesitated. A spot on the track team intrigued her, but she knew it would mean less time with her dad. She decided to do it, but said she's still afraid that it will mean fewer visits, and moments where her family can be together in one place. She said that if she had a chance to speak directly to President Donald Trump, she would talk about the personal hardship her family has been through.

“I would say, ‘how would you feel if you were being separated from your children, from your family,’” she said. “I want them to put themselves in our shoes to see if they would like it.” 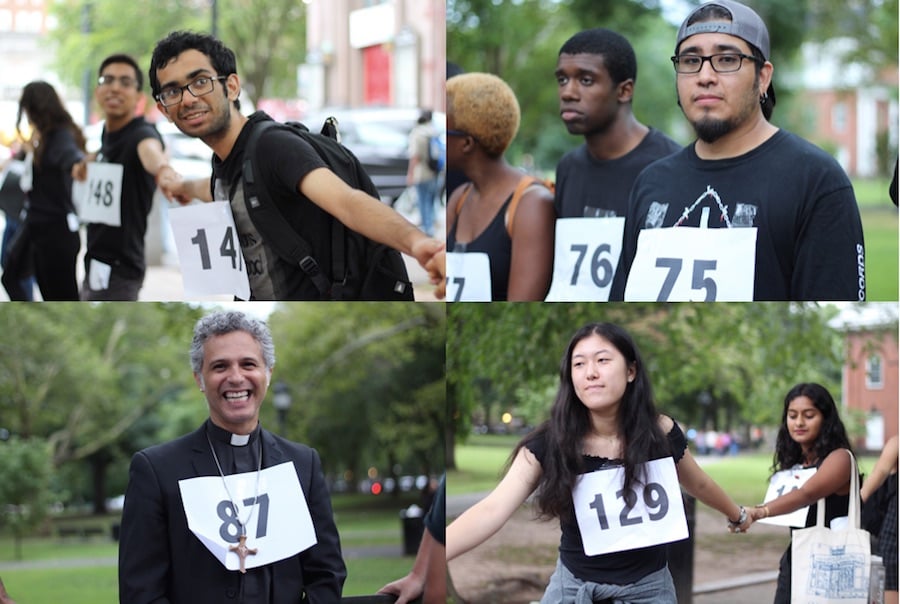 Around her, rally-goers linked hands and wrapped around the upper New Haven Green, where a large portrait of Pinos stands facing the church. Those not assigned numbers walked alongside them, a few breaking off to talk to curious passers-by and people waiting for their Friday afternoon buses. “No fear! No hate! No ICE in our state!” they chanted as they walked along.

Lurching down Temple hand-in-hand with strangers, Yale freshman Amal Altareb (day 124, pictured below) said that she had come to the rally because she identifies with Pinos’ plight. While she immigrated to the U.S. in 2011, she was born and raised until then in Yemen, one of the countries included in President Donald Trump’s travel ban that was upheld in June. On campus for just three weeks, she heard about the rally from student groups, and decided to become involved in the cause.

“There is this kind of shared feeling between Muslims and all immigrants and refugees—and I think it should be all humans,” she said. “All Nelson is asking for is a peaceful, happy life with his family, and it’s crazy that we have to advocate for such basic human quality of life on this day and this age.” 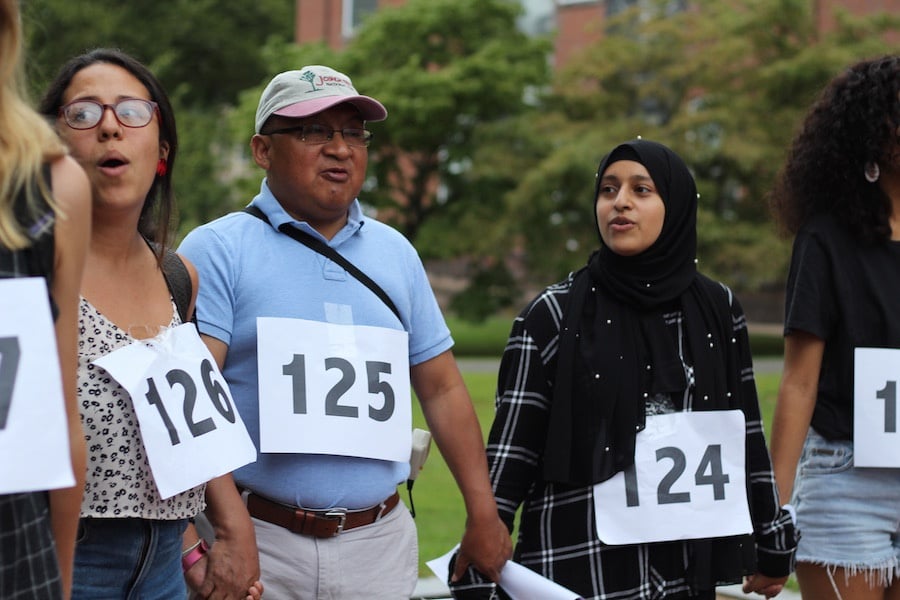 Beside her, Luis Yumbla nodded, walking forward slowly as not to pull too hard. Executive Director of the Hudson Valley Community Coalition, Yumbla came to the U.S. from Ecuador 25 years ago. He said he tries to make every action that he can, to show his support for immigrants who, like him, have been in this country for decades.

“We have to support Nelson” he said. “It does break our hearts, because this is very cruel and inhuman to Nelson Pinos and to his family. He don’t do nothing wrong. The only thing he do is come to this country to get a better life. And he deserves to have the chance to be with his family.”

“El pueblo unido, jamás será vencido!” the crowd chanted. As if on cue, the rapper K’naan's voice boomed over Chapel Street. And we all came America trying to get a lap dance from Lady Freedom/But now Lady Liberty is acting like Hilary Banks with a pre-nup. Marchers looked around for a moment before they figured out what was happening: across the street at Garden Catering’s grand opening, deejay Craig Ventura had stopped what he was playing and switched the track to Lin Manuel Miranda’s “Immigrants, We Get The Job Done.” 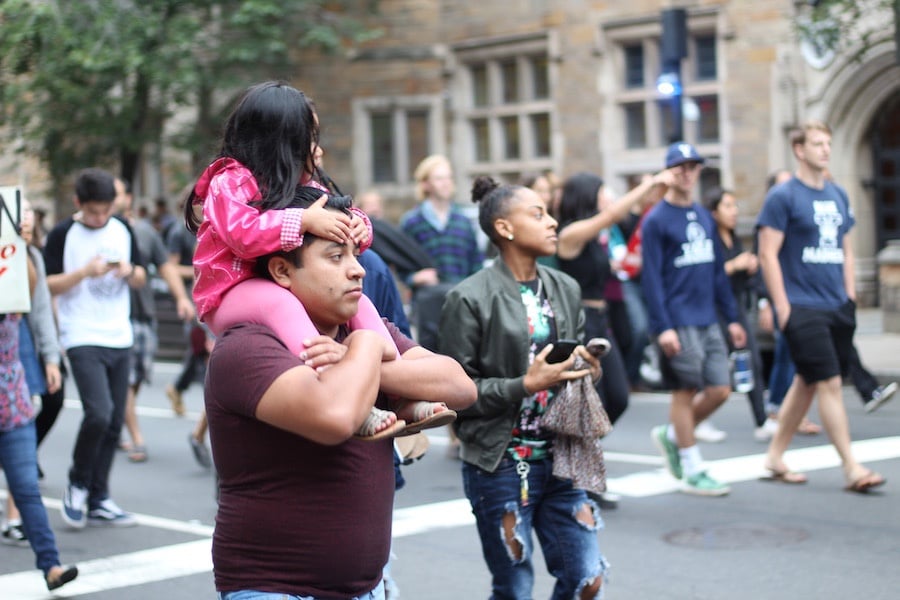 “Yeeeeesssss! That’s my jam!” yelled activist Vanesa Suarez from across the street, throwing her hands up in the air as she stood somewhere between numbers 210 and 219. Earlier in the rally, she had led the crowd in a call-and-response that doubled as a meditation, beginning and ending with the statement “I am/somebody.”

Now, ULA founder John Lugo had begun to lead a march behind her, snaking down Temple to Chapel, hooking around York, and then heading back to the Church on Elm. As the song's next verse dropped over the street—It's a hard line when you're an import/Baby boy, it's hard times/When you ain't sent for—marchers joined in with their own words.

“What do we want?” someone yelled over the crowd.