30 Years Later, "Fires In The Mirror" Ignites A Dialogue At Long Wharf 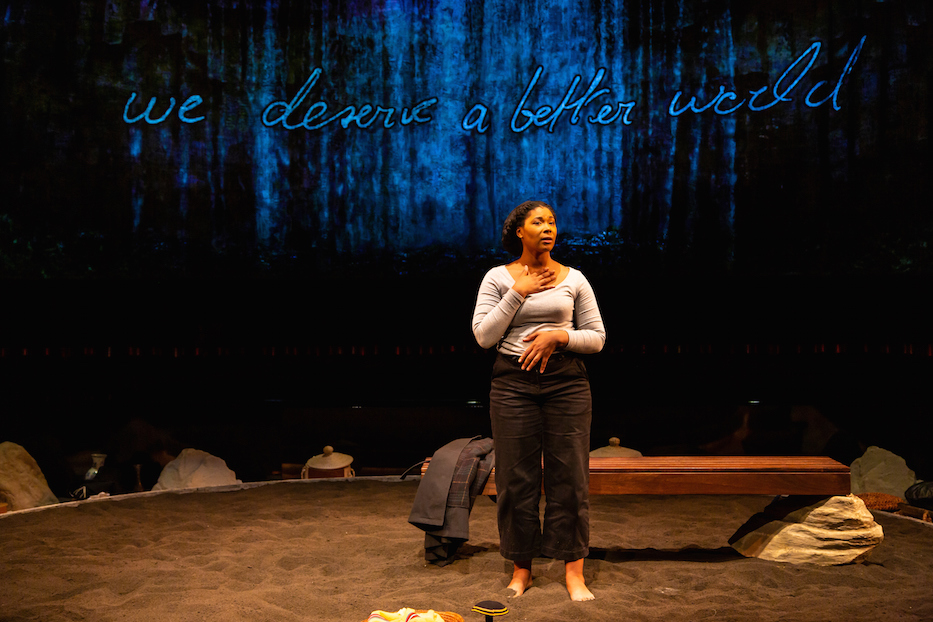 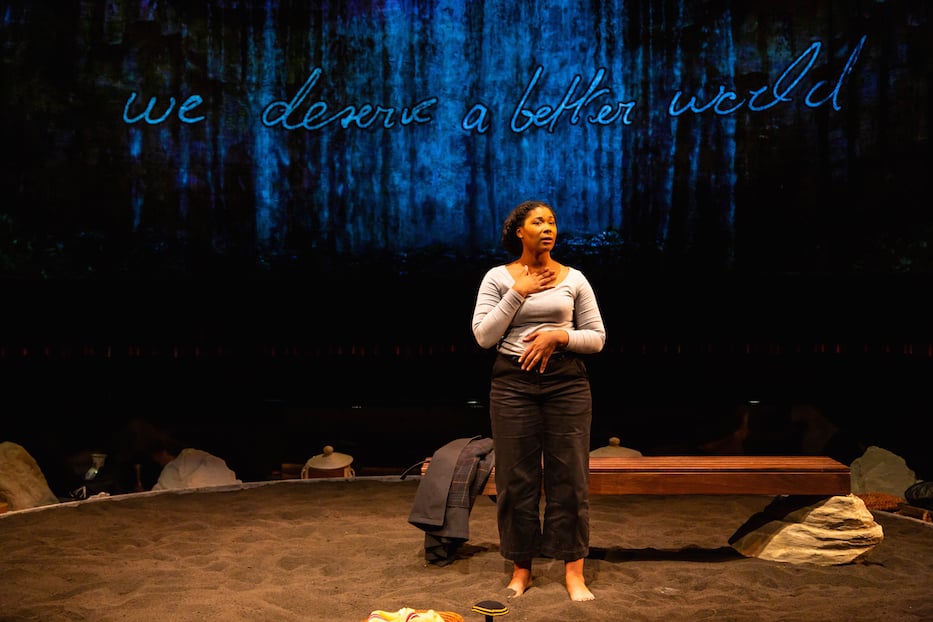 The poet Ntozake Shange stands upstage, the word identity rolling around her mouth as she tests how far it can bend. She takes a breath, crisp on the exhale, and slips on a headscarf. She becomes a Lubavitcher mother in Brooklyn, in search of someone who can turn her radio off on Shabbat. She breathes in again, and the playwright George C. Wolfe appears in her place, dipping into the recesses of his memory as Los Angeles stands on the brink of burning.

The snappy, intentionally disjointed rhythm defines Fires In The Mirror: Crown Heights, Brooklyn And Other Identities, Anna Deavere Smith’s groundbreaking 1992 work now running at Long Wharf Theatre through Feb. 6. Directed by Nicole Brewer with an ambitious crew, it marks both a collaboration with Baltimore Center Stage and an anniversary performance at Long Wharf, where it ran 29 years ago this year.

It would not be possible without actor Cloteal L. Horne, who alone plays all 26 characters in the script. All of them are products of a diaspora, and all of them have stories to tell.

First performed to great acclaim in 1992, Fires In The Mirror follows the events of August 19, 1991, when a motorcade following Chabad Rebbe Menachem Mendel Schneerson blew through a traffic light in Crown Heights—whether it was red or yellow is still contested today—and veered into a curb, striking two children. Seven-year-old Gavin Cato, the young son of Guyanese immigrants, was trapped beneath the car and killed. His 7-year-old cousin Angela, who was with him at the time, was injured.

Hours later, 29-year-old Hasidic student Yankel Rosenbaum was beaten and stabbed while walking in a nearby section of Crown Heights. Rosenbaum, an Australian student, was white and visibly Jewish; his assailants were Black. He later died at Kings County Hospital, which his family sued for medical malpractice. For the next three days, violence shook Crown Heights. The ground opened to a pit of grief. People threw bottles and raided stores. Police chased after and in some cases beat Black children. Both Jewish and Black residents closed themselves up inside their homes, feeling othered and fearful.

In the event’s tumultuous aftermath, Smith spoke to over 100 people, from Black and Jewish neighbors to prominent activists, artists, academics and faith leaders including Shange, Angela Davis, professor Leonard Jeffries, Minister Conrad Mohammed and the Rev. Al Sharpton. Some, like Sharpton, played an outsized role at the time of the riots, where he presided over Cato’s funeral and later led protesters through Crown Heights on Shabbat. Others, like Black high school students, musician Monique “Big Mo” Matthews, Jewish mothers, and dozens of neighbors sitting out on their stoops, talked to Smith while trying to simply live their lives.

Of those dozens of interviews, 26 make it into the play. They are written just as Smith transcribed them, such that stutters, billowing accents, dismissively clucking tongues, nervous laughter and stop-and-start patterns of human speech become integral to the work. 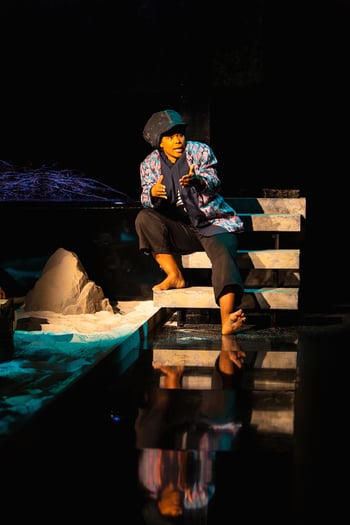 Fires was first performed at the Public Theatre in 1992 It was prophetic even then: it premiered two days into the L.A. race riots, after officers were acquitted of brutally beating Rodney King. Smith recorded the work for PBS “American Playhouse” series a year later. It first ran at Long Wharf for a week in 1993, with Smith in the role that she had originated.

As she steps onto Long Wharf’s stage decades later, Horne straddles past and present, both faithful to the script and unfixing the story in time. Stripping off a pair of sneakers and bright knit sweater that mark her as herself, she transforms into a vessel, ready to take on over two dozen different personae one after the other. It is a task to which she rises gracefully, using breath to mark the transition between the one character and the next.

The way she weaves these histories together is part of the show’s power. Audience members hear clearly from community members that share in the depth of their rage, and are divided by its origins. While parts of the work may have felt more immediate in 1992—Sharpton’s monologue on James Brown, or Jeffries’ critique of Alex Haley's sale of Roots to producers David Wolper and Stan Margulies, both of whom were Jewish—much of it is as stinging today because racism has not disappeared from American consciousness.

When a Lubavitcher mother insists that she and her Black neighbors want the same fundamental health and safety for their families, the audience is with her—until she’s explaining matter-of-factly why she can’t have dinner with those same neighbors. When Conrad Mohammad, who ministered for Louis Farrakhan and the Nation of Islam, catalogues the horrors of enslavement, the audience is with him too—until he delegitimizes the entire practice of Judaism in less than a sentence.

Many of the same conspiracy theories that the audience hears in the show—that Sharpton brought busloads of Black people into Crown Heights to riot, that Jews are running the media writ large, that there’s a relationship between Israel and American law enforcement—are not so different from rumors that weave through the airwaves and onto the web today. There are echoes of tiki torches and Charlottesville, of Trump supporters storming the Capitol with no recourse, of people simply talking past each other because they’ve forgotten how to listen.

Horne is nimble in balancing the script’s emphasis on storytelling and living history with its interest in a more theoretical framework, from distorted mirrors (“You know you have a pretty young woman and she looks into a mirror and she’s a witch, because she’s evil on the inside,” she says as Aaron M. Bernstein, a professor of physics at MIT) to the creation of race and racism (“If we don’t transform this intransigent, rigid, notion of race, we will be caught up in this cycle of genocidal violence that is at the origins of our history,” she ruminates as Davis, bouncing between sitting and standing).

Paired with real, heartfelt and often heart-rending testimonials of August 1991, it’s a stark reminder of forced migration and the depth of loss embedded in a diaspora. Whether she is speaking as the aggrieved Norman Rosenbaum or the fiery Richard Green, who led the Crown Heights Youth Collective, she clearly communicates the sharp edge of whiteness, and the way it has been weaponized to divide historically marginalized and oppressed people.

In addition to her voice, Horne uses her whole body as an instrument, with lyrical, propulsive movement that makes the play crackle at the edges. She becomes a child, playing hopscotch on the warm pavement, and just as quickly a parent watching protest bubble in the streets. 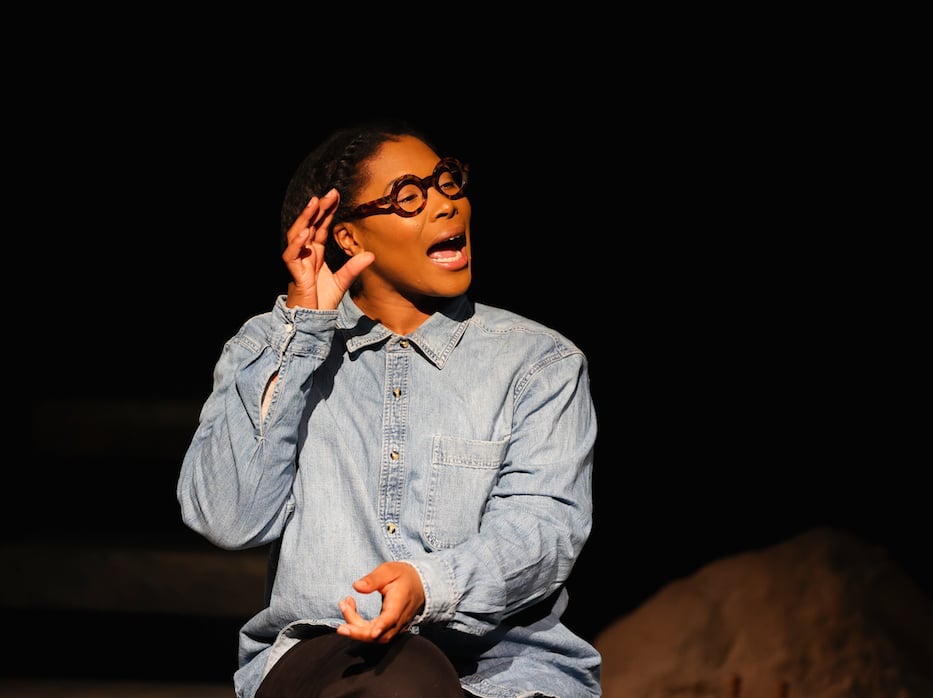 In the show—just as in New Haven in 2022, or Los Angeles in 1992, or Minneapolis in 2020, or Cincinnati in 2001, or Charlottesville in 2016, or the world many times over—there’s a debate over whose trauma cuts most deeply, whose actions can be justified as two people lie dead on the streets. As they talk past each other, characters rarely acknowledge a shared and forking history—of paupers’ fields, of erasure of land and names and languages, of ghettoization that they never asked for. For the Jews in the play, it is the obsession with remembering the six million lost in the Holocaust, a trauma so deep and so recent that its very name is a wound. For the Black people in the play, it's the spoken and unspoken spectre of enslavement, and the economic deprivation of Black Americans that continues today.

It is hard to see this work and not think of New Haven, where the scars of urban renewal, redlining and environmental racism are still raw and throbbing. If the city were a body, there would be a pain point downtown, where Rabbi Shua Rosenstein was beaten and called a “fucking Jew” two years ago this coming April. And another in Beaver Hills where a growing, largely self-segregating Orthodox population has come to barbs with Black neighbors about law enforcement in the community. And a bruise blooming along the Oak Street Connector, where 886 families were displaced during urban renewal. And thousands in Dwight, Dixwell, Newhallville, Fair Haven and the Hill, where a scarcity of resources has left neighborhoods gripped by violence.

Horne doesn’t do the work entirely alone, and the play’s success is also owing to a crew that has worked through pandemic conditions to pull the show off. A set from Diggle brings attendees into a kind of healing circle, where Horne can and does bury her feet in the sand, beat drums, and circumnavigate the space. Thanks to costume designer Mika Eubanks, small pieces—a kufi, pairs of wire-rimmed and tortoise shell glasses, button-down shirts, wide-brimmed black hats and white tallit—allow Horne to shape-shift between characters.

Lighting (Porsche McGovern) and sound design (Bailey Trierweiler, Daniela Hart and Noel Nichols) help differentiate between characters and underscore the tension building in the script. Among projections that put the work in context, designer Camilla Tassi’s use of archival news clippings and photographs, panoramic New York skylines, and the cool concrete of memorials are particularly successful. Some are a little too on the nose: the black-and-white piles of discarded shoes at Auschwitz and 2020 Black Lives Matter Protests in New York read as Long Wharf not trusting its audiences to make the connection.

When Smith performed the work in 1992, Fires In The Mirror became an unlikely container that put these interviewees in conversation with herself, with the audience, and perhaps most crucially with each other. It holds up 30 years later, at a time when neighbors, faith leaders, bloviating elected officials may need to simply stop talking past each other and listen, when Black people and non-Black people of color are still terrorized by law enforcement, when Antisemitism continues to rise across the country.

Nowhere, perhaps, is that more evident than in a final monologue from Carmel Cato, Gavin Cato’s grieving father. Horne sits at the front of the stage, an orange light glowing on her face as she pushes away the set's sand and opens a trap door. As she morphs into character, Cato is angry and exhausted; Horne is too. Holding a soft, child-sized sweater—for a moment, it looks like it could be a red and yellow tallit—he loses it. He weeps, his voice thick and deep at the edges. There is no justice, he insists.

He’s not wrong. But in a different world, there could be.

Fires In The Mirror: Crown Heights, Brooklyn And Other Stories runs at Long Wharf Theatre, 222 Sargent Dr., through Feb. 6. Tickets and more information are available here.