50 Rally To #StopKavanaugh, Say #IBelieveYou On The Green 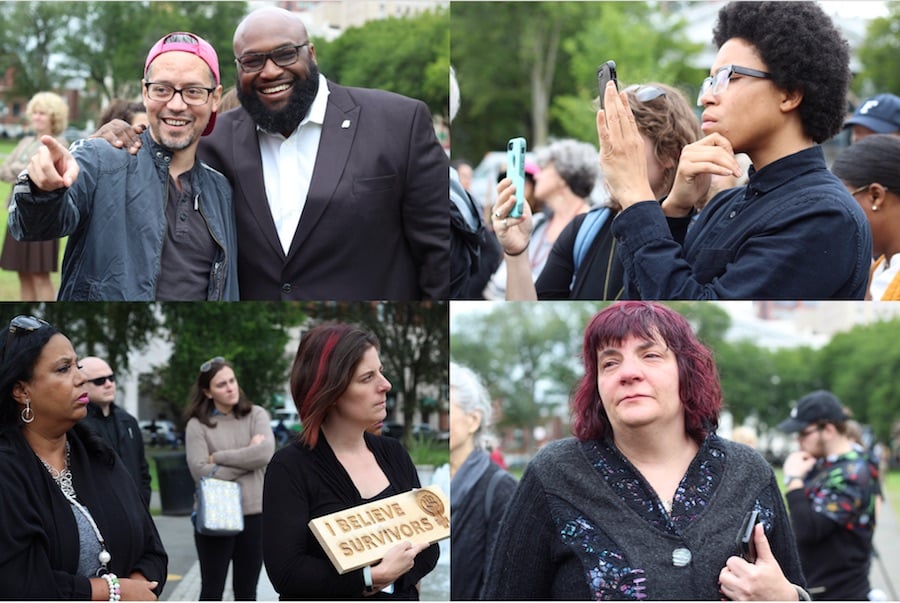 Angry that she still walks home at night with her keys between her fingers, just incase.

Angry that straight white men still don’t understand how being that angry feels.

Monday afternoon, Reese (pictured below) was one of 50 to attend New Haven’s chapter of a national walkout and moment of solidarity to oppose the nomination of Brett Kavanaugh to the Supreme Court of the United States, and to voice support for Dr. Christine Blasey Ford and Deborah Ramirez in the days following their allegations of Kavanaugh’s sexual assault and misconduct. Held on the New Haven Green, the action was organized by Nasty Women Connecticut, Black Lives Matter New Haven, Women's March CT and Planned Parenthood of Southern New England (PPSNE), with support from the Connecticut Alliance to End Sexual Violence.

A parallel sit-in, rally and gathering, from which members of the media were largely barred, took place for several hours at the Yale Law School on Wall Street. Despite McClure’s hope that the two might converge on the Green, very few participating Yale students and faculty attended the public event. 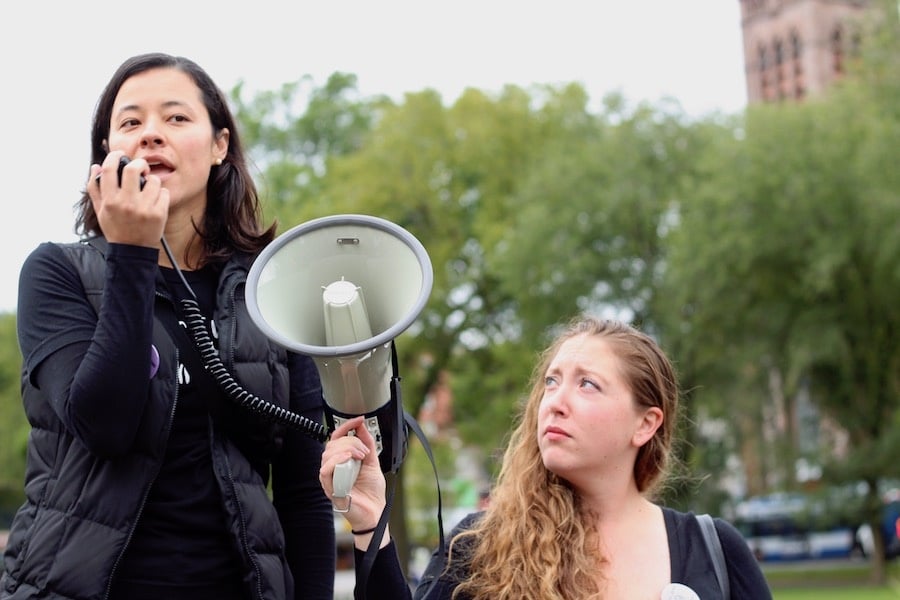 “When it comes to community and protest, Yale is not New Haven,” McClure said, noting that the walkout on the Green came together quickly over the weekend, because she had a feeling that Yale could not represent the entire community. “That’s [the protest at the Law School] saying, if you’re privileged enough, there is space for you. But there is space for each of us. And we’re holding space for each other.”

“It’s all of us,” she added as she addressed the crowd. “And remember, we all have the power to make any kind of positive change in our community. And we have to start by voting. Vote. Talk to people. Listen to people. Don’t just let our differences separate us, because we have enough of that as it is. We need to stop that … if we need to make sure that we truly are safe.”

McClure held out a megaphone and small attached mouthpiece for anyone who wanted to speak. Around the Green’s flagpole, the crowd looked on for a moment, no one coming forward. A few people moved around to dodge bees, with which the air soon became thick. From her spot outside of the flagpole, artist Ashleigh Huckabey joked that they represented all the working women who hadn’t been able to walk out, but were there in spirit.

Back in the crowd, the poet Sun Queen (pictured above) approached the front of the gathering to speak. She tested the volume out on the megaphone’s mouthpiece, warning members of the crowd that she had a soft voice, but would speak as loudly as she could. She launched into a poem titled “#MeToo” that she performed earlier this year, at a screening of Nasty Women’s Testimonials Project at Lyric Hall in Westville.

Looking up at the crowd for a moment, she pressed on, something catching in her voice as she described a movement that has become the “nightmare inside many girls and women’s minds.” She read verses about her own #MeToo story, a pattern of sexual abuse that began when she was a child, and knew something wasn’t right long before she knew the words to express it.

I was robbed, manhandled, and told to lay right there
To be still, to not say anything
I didn’t want what happened in my dreams, or my reality
I couldn’t tell if I was for sale or not
How much was the ticket? Was he doing this to make a dollar? 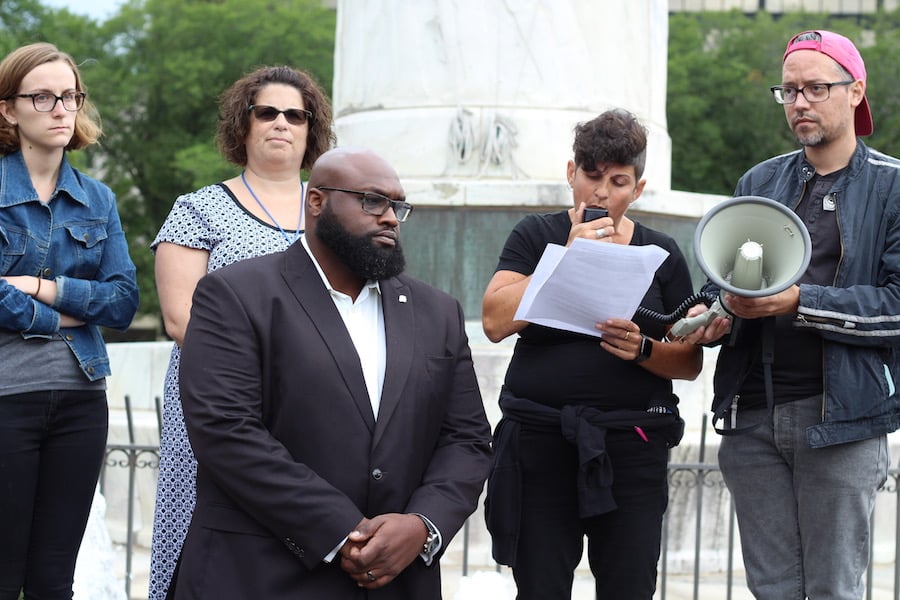 She opened the gate to more speakers, including musical interludes and more of her own poetry later in the walkout. Gretchen Raffa, director of public policy, advocacy and strategic engagement at PPSNE, stood surrounded by colleagues as she spoke about the need to “show support of all survivors of sexual violence,” an action that begins with believing their stories if and when they come forward.

Raffa described the difficulty and pain that survivors of sexual assault go through when they do decide to come forward, only to have their allegations dismissed. She called it one of the largest reasons 77 percent of sexual assaults currently go unreported.

“We stand with Dr. Christine Blasey Ford. We stand with Deborah Ramirez,” she said. “We are still standing with Anita Hill … survivors who have the bravery and courage to share their stories should be treated with respect.” 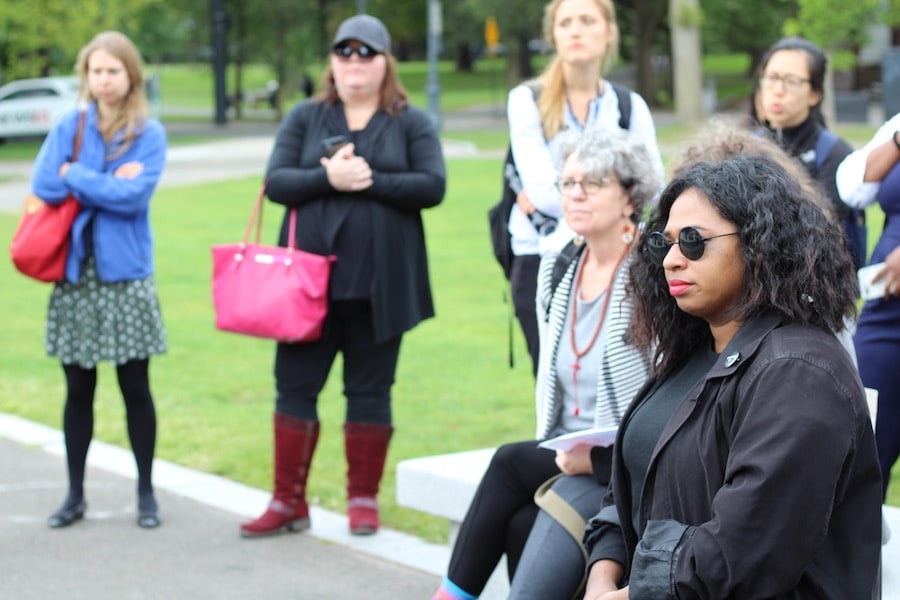 Back in the crowd, Giulia Gambale (pictured in the collage at top) had tears running down her face. A two-time survivor of sexual abuse, she said that Kavanaugh’s nomination, paired with the current administration, has left her feeling both angry and motivated. She recalled trying to tweet about her experience and own #MeToo story, which includes a particularly traumatic period between the time she was seven and 11 years old.

“I remembered my Barbie Dream House, because that was the thing that I saw when I was lying up in bed,” she said. “That was the thing that left when a family member was done with me. So something that’s really innocent. And having people in your own family not do anything, and later on not believe you.”

“I’m used to people in power being assholes,” she said. “But what’s happening now—this is the one. I usually am pretty motivated as a person, and so I have just a very strong, strong will to not only survive, but to do the work. It needs to be done.”

Connecticut Alliance to End Sexual Violence issued the following statement, which Raffa read at the event: “We believe you. Your story is yours. You decide if, when and to whom you will tell, in your own time, and to create a path for healing. We are here for you.”