52 Years In, Love Marches On 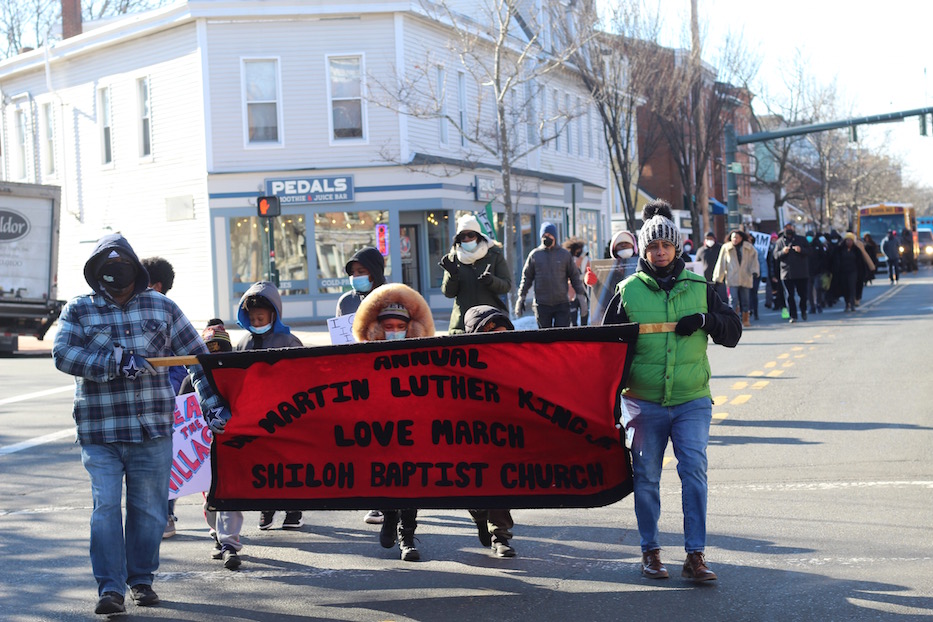 Top: Marchers on State Street. Bottom: Tenikka Hampton (in the center) with her sister Alea. Both grew up marching, and called singing in the march a form of worship. Lucy Gellman Photos.

Tenikka Hampton lowered her mask and lifted her face toward the sky, her breath wispy and white in the morning air. Portraits of President Barack Obama and Dr. Martin Luther King, Jr. peered from a sign that read “We Shall Overcome: The Dream Still Lives” in her hands. Around her, Humphrey Street was still waking up to the bone-cracking cold. She began to sing, collapsing hundreds of years onto a single city block.

Ten-degree temperatures couldn’t stop Hampton and members of the Shiloh Missionary Baptist Church from keeping spirits high at the 52nd Annual Martin Luther King, Jr. Love March Saturday morning, held on what would have been Martin Luther King, Jr.’s 93rd birthday. Braving the cold and the wind, close to five dozen marchers began at the church’s Lawrence Street home, wound through the streets of East Rock singing, and ended with a short speaking program and mask and test giveaway outside the church. 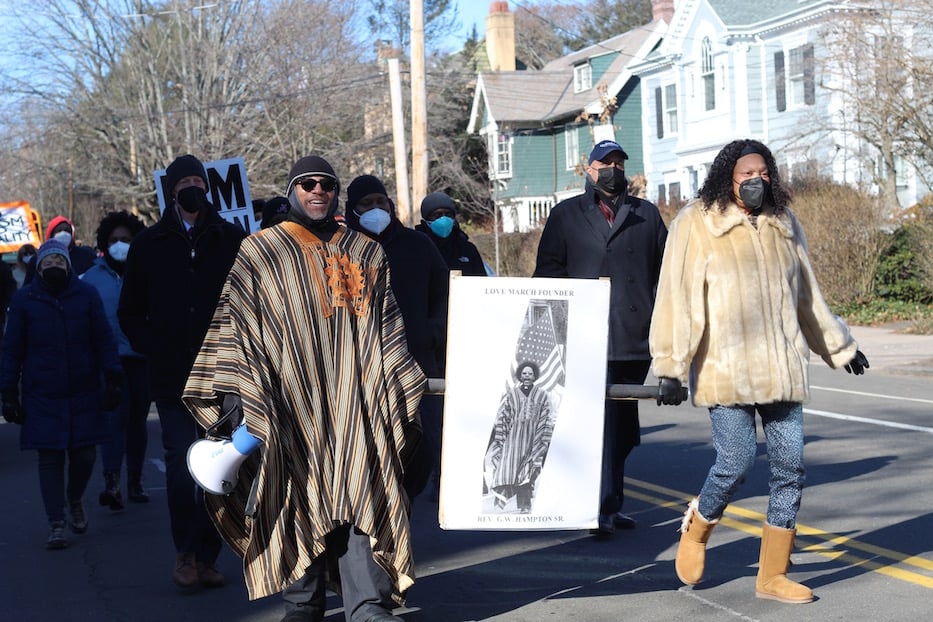 As attendees assembled on the church’s front steps, the theme “Ain’t No Stoppin Us Now” seemed fitting. Bundled in coats, gloves, hats and masks, young kids looked to veteran marchers for some sense of what was supposed to be happening. A school bus hummed to life, ready to carry elders who weren’t able to walk out in the cold. Six-year-old twins Kamren and Karter Christie scurried to the front of the line, each holding a sign in their gloved hands.

As he moved through the knot of attendees, Hampton appeared in the same billowing black, tan and gold agbada that his father once wore, with deep orange piping at the neck and embroidery over the chest. In one hand, he carried a red and white megaphone. In the other was a black-and-white portrait of his dad, moving through the same streets in King’s honor decades earlier. 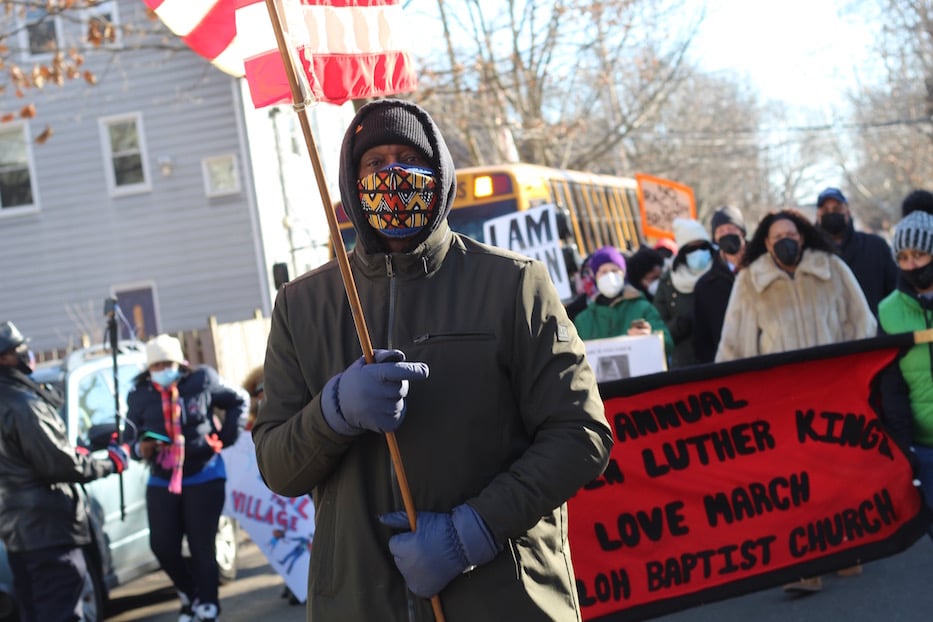 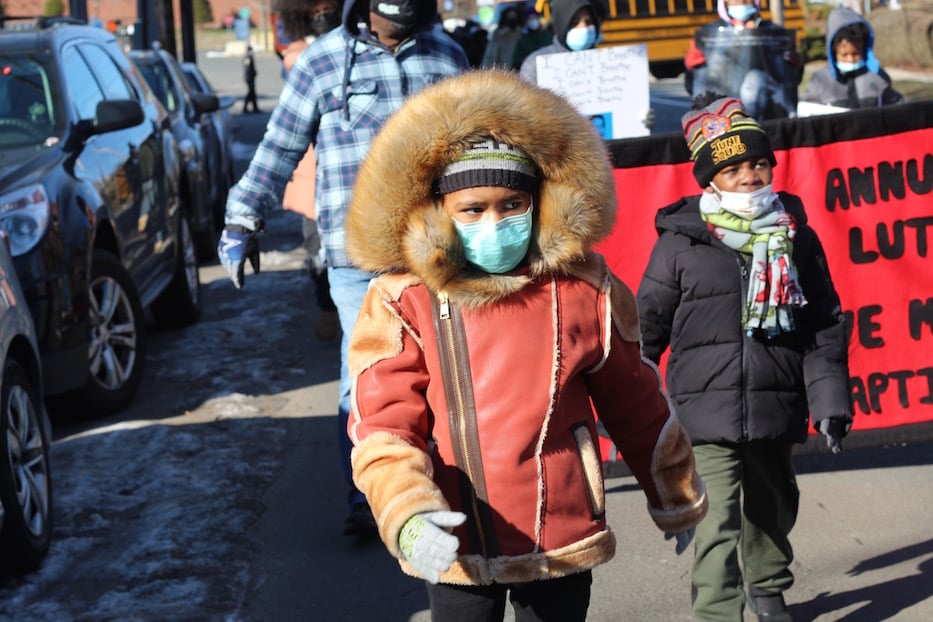 As marchers made their way up Lawrence Street toward Whitney Avenue, it was song that kept them warm. Raising their voices from the middle of the group, Tenikka Hampton and her sister Alea began with a call-and-response that has become muscle memory for both of them. As the pastor’s daughters, they began marching each January when both were in utero, and then continued as babies, children, teens, and adults. It is Tenikka’s 45th year marching, and her sister’s 30th.

Their voices extended to the back of the line, ringing over the still-quiet sidewalks and parked cars. It reached their mother Charlene at the front, the sound wrapping around her as she and her husband joined in. As marchers filed from Whitney Avenue onto Humphrey, the sound slid into “We Shall Overcome,” unexpected harmonies bubbling up from the group. After each chorus, Tenikka shouted out the verse that was coming next.

Both she and Alea later called it a form of worship that they are proud to uphold.

Alea and Tenikka Hampton.  "If we don't stand for something, we'll fall for anything," Alea said after the march. "So I continue to march because for me, this is my way of showing that I'm never gonna give up, I'm gonna keep fighting. I want the world to be a better place. If not for me, then definitely for my kids."

“I believe when our ancestors worked the cotton fields, that’s what they did to keep their spirits up,” Tenikka said. “They used song to let their spirit and their soul rejoice in a hard situation. That has been passed down from generation to generation. Growing up in the church … we all use our voice to sing and to lift folks up.”

Singing through the freezing temps meant that “I was warm,” she continued. “There’s a fire. There’s love on the inside, and it comes through your voice.”

Back at the church that fire burned bright, roaring through remarks that at times turned the frigid parking lot into an impromptu church service. To cheers and a few deep mmmmms, U.S. Rep. Rosa DeLauro invoked the legacy to her friend and former colleague, the late Civil Rights champion U.S. Rep. John R. Lewis. Like King, she said, Lewis was a man who fought until the end of his life with the conviction that a more just and fair world was possible.

Earlier this week, she and her peers in the U.S. House of Representatives voted to approve the John R. Lewis Voting Rights Act. As it goes on to the Senate, she has listened to opponents use arguments that include a fervid defense of the filibuster, itself a bulwark of white supremacy, and talking points that first surfaced against the Voting Rights Act in 1965. She urged attendees to push back against an attack on voting rights that has continued to escalate in Washington, D.C. and across the country.

"All of our firepower, our voices," she said. "That's where our power is. In our voices. And standing up must be focused on the United States Senate. That is what our cause is … If we can't get this done, we will see the further erosion of all the ideals and the values that we hold dear in this country.”

Mincing no words, State Sen. Gary Winfield said he was tired of hearing about the "Santa Claus version of Dr. King," the mild-mannered beacon of harmony and racial reconciliation that Republicans tweet glowingly about once a year. He wants his children—and all children—to know the Dr. King who rallied for labor rights and against capitalism, who led the Poor People’s Campaign, who the then-nascent F.B.I. saw as one of the most dangerous men in the United States for his basic belief that Black people should have equal rights. 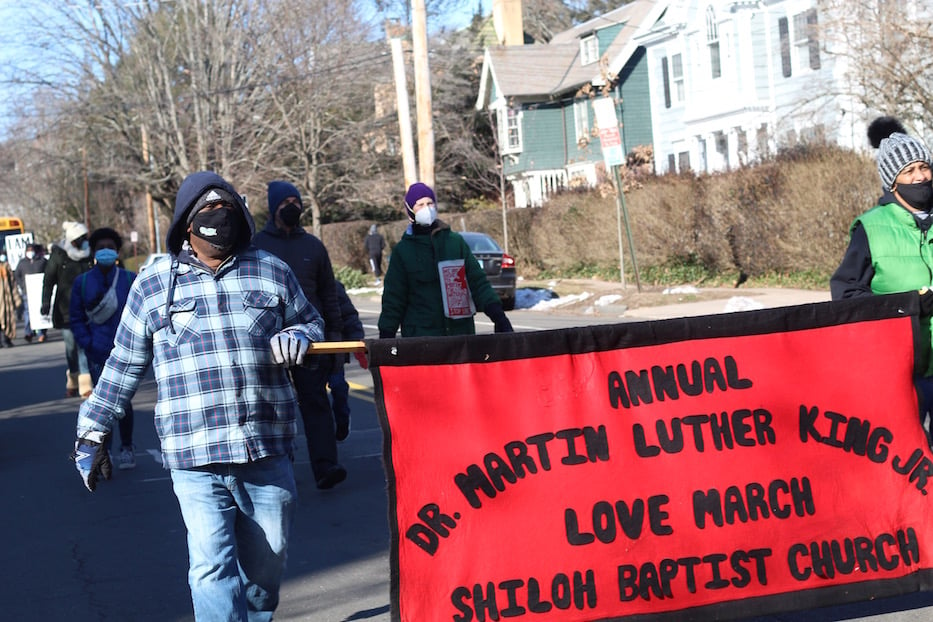 Winfield looked to King’s “I Have A Dream” speech, delivered on the steps of the Lincoln Memorial in August 1963. People love to quote from a single section of that speech, he said, where King lays out his dreams for his four children. But they don’t like to talk about the other part, where King looks to the country’s founding fathers, and determines that there has been a great miscarriage of justice for Americans who are not white. That, in his words, “the bank of justice is bankrupt.”

“​​It is obvious today that America has defaulted on this promissory note, insofar as her citizens of color are concerned,” King read in 1963, his words bouncing over a crowd of hundreds of thousands of people. “Instead of honoring this sacred obligation, America has given the Negro people a bad check, a check which has come back marked ‘insufficient funds.’”

Back in 2022, Winfield took fellow politicians to task, noting how many show up at Black churches or in predominantly Black communities only when they want a vote in favor of something. He asked, with a kindness at the edges of his voice, that they show up more genuinely going forward. “Say it!” someone shouted from the back of a circle that had formed.

State Sen. Gary Winfield: "Listen. We're not out to be angry. We love our community enough to hold people to account."

As members lined up for free masks and test kits, congregants shivered through quick hellos, checking in on fellow church members just as they would with family. Margaret Stevenson, who has been a member of the church for 11 years and marched for 10, dipped into her memories of the Love March beneath a snug cap that commemorated its 50th anniversary two years ago.

Growing up on Lawrence Street, Stevenson knew to look out for the march “like a parade” every year as it passed by her home. When she joined the church, there was no question in her mind that she would march. For a decade, she’s done so alongside fellow members like her friend Diane Jackson, who said that she marches as an antidote to the violence, anger and inequity she sees around her in both New Haven and the rest of the country. 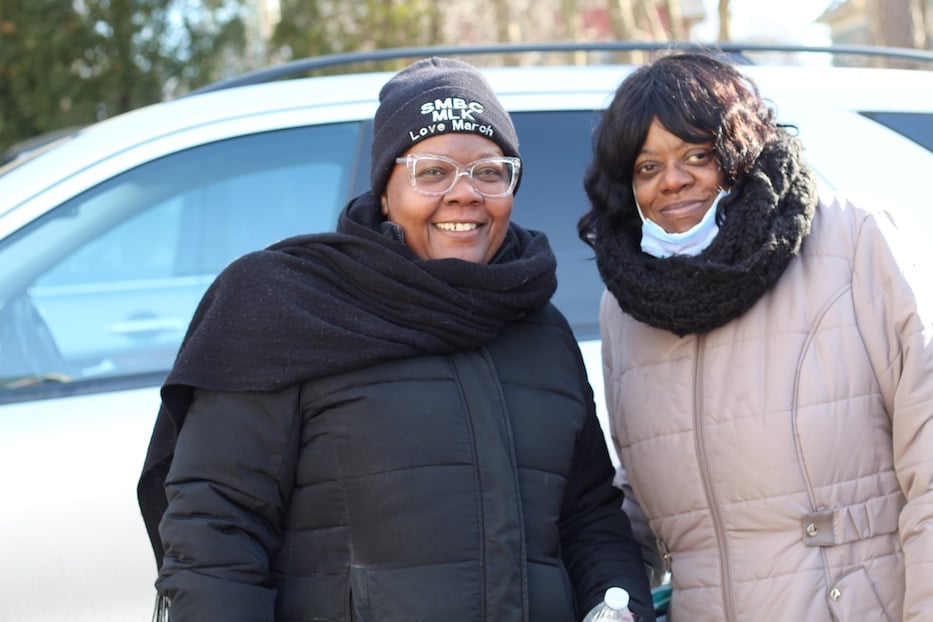 Top: State Sen. Jorge Cabrera. "It's not an exaggeration," he said. "Our Democracy is literally being threatened everywhere across this country. The things that so many people died for, fought for, faced water hoses for, had dogs sticked on them for—were jailed for, were murdered for, is on the line. It's real. This is a fight I know we're up for." Bottom: Friends Margaret Stevenson and Diane Jackson.

“There are so many people before me that went through a lot to have the rights that I have today,” Stevenson said.

"This is my second family, which is a very … we're like a community family,” Jackson chimed in. “It's important to me with all the violence in the country ... it’s a message. Martin Luther King's dream. And this love march signifies that Martin Luther King is still alive.”

Nearby, Wanda Faison chatted with her 12-year-old nephew Marcus Wearing, a student at Ross-Woodward School and one of Alea’s three sons. A lifelong member of the Shiloh Missionary Baptist family, Faison remembered joining the Love March as just a kid, when she was growing up on Starr Street in the city’s Newhallville neighborhood.

In the earliest days of the march, Rev. George Hampton would start the procession on Bassett Street, gathering young marchers before he headed towards East Rock. They would walk together, joined in song, warding off the cold. Even on its coldest January days, she said, she gets a jolt of joy from watching kids toddle and march along, learning the same lyrics that she once did. She sees it as a way to honor King’s legacy. 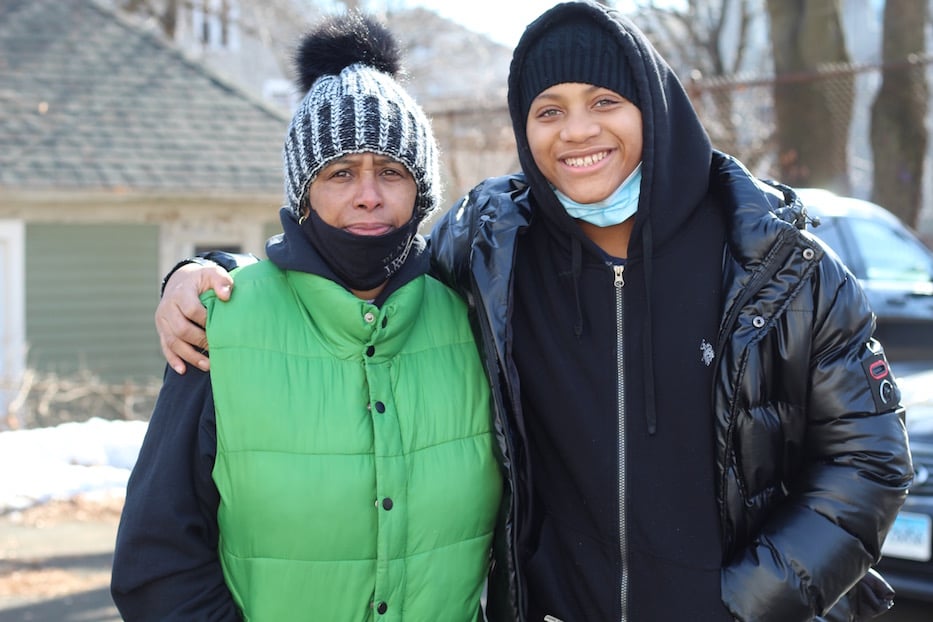 As Hampton’s grandson, Wearing joked that the Love March “it’s mandatory.” He’s been part of it since he was a baby. As he spoke, his face grew more serious. The older he’s become, the more he thinks about the persistence of racism in his school, his community, and his country.

"It means a lot because we need to end racism,” he said. “It's still here.”