A Love Story, A Lifetime In The Making

Gorman Bechard was 18 years old the first time he tried a slice of New Haven pizza. Decades later, he hasn’t looked back.

Bechard is the director, filmmaker, co-producer, and eater-in-chief—or something like that—behind Pizza, A Love Story, an 85-minute documentary running this weekend at the New Haven Documentary Film Festival. A culinary tour de force from start to finish, the film chronicles the origin, history, and legacy of Sally’s Apizza, Frank Pepe Pizzeria Napoletana, and Modern Apizza. Together, the three comprise the oldest and longest-standing pizza places in New Haven.

While an in-progress excerpt of the film was shown last year, this is the first time that the fully produced, finished work will be running at the festival. For Bechard, who co-founded the festival six years ago with film historian and American Studies professor Charlie Musser, that’s a hometown win.

“The film is a love story itself to the three greatest pizza places on the planet,” he said in a recent interview on WNHH’s “Kitchen Sync” program. “The Holy Trinity. Sally’s. Pepe’s. Modern. Starting with before they even existed, and the Italian migration to New Haven, which filled this area which we know as Wooster Square with one of the biggest Italian populations, at the time, in the country.” 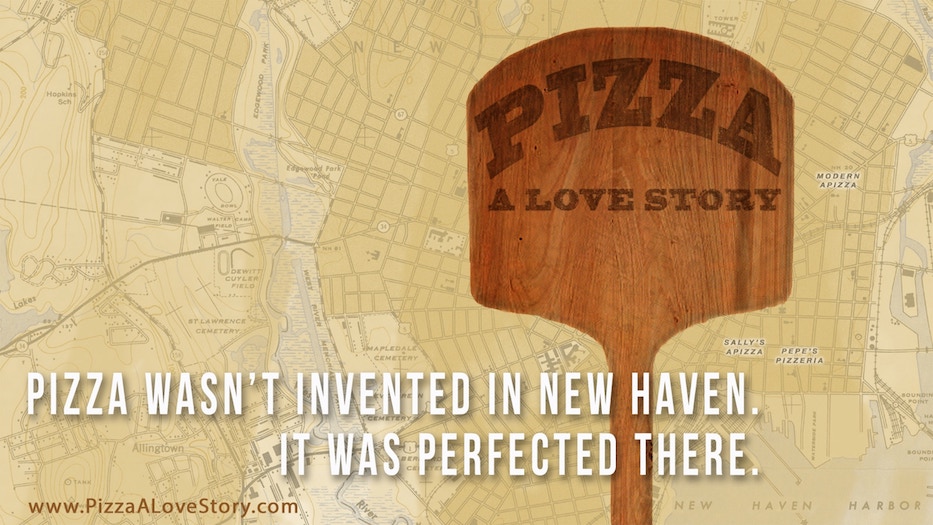 For the filmmaker, it’s a love story that reaches back into his youth. Born and raised in Waterbury, Bechard grew up eating pizza from a place called Dominic’s, nestled on the city’s Woodtick Road. It was fine, he said—cheesy, with a puffy crust and cut into squares.

By the time he was in his late teens, he had joined a punk group that would play shows at Ron’s Place in New Haven, then on Chapel and Park Streets. At some point—he thinks it was probably after a show—he tried a plain pie at Modern. He was also dating a girl on Wooster Street, and worked his way over to Frank Pepe’s, and then Sally’s. The smell of the wood-fired pies was enough to make him swoon. The rest was history.

“If we all think back to the movie Trainspotting, and we’re watching Ewan McGregor shoot up heroin, and his eyes roll back in his head and his head flops back and he just is like—some ecstasy that none of us can understand,” he said. “That’s the first bite of New Haven pizza.”

By the time he and his wife moved to New Haven in the late 1980s, he was hooked. Where pizza had once been a monthly routine, it became a semi-weekly one, with the two rotating their pies out. His opinion on a favorite changed daily (as it still does, he said): sometimes it was the rich, salty clam pie at Pepe’s. Sometimes what called to him was the plain with garlic at Sally’s. Sometimes it was a cheese pie at Modern that did the trick.

During those years, Bechard developed a list of de facto pizza rules. One: it’s all about the charred sides of the pizza, the blackened result of rotating dough in a very hot, wood-fired oven. Two: a pizza joint is only as good as its cheese pie. Three: a plain pie means straight up tomato sauce, maybe a little romano, and some basil and garlic. Add mozzarella, and it’s no longer a plain pie.

At the same time, Bechard was learning to love making documentaries. In the early 2000s, he revived and then finished Color Me Obsessed, a documentary about the rise and fall of The Replacements that another filmmaker had started, and couldn’t finish. He re-shot and edited most of the film from scratch. When he’d finished, his wife suggested that he try documentaries about his other interests—including pizza.

“I fell in love with doing documentaries,” he said. “It was almost combining everything I loved about writing books, about filmmaking, into this one thing. I love how you put the story together in the editing room. And you go out to interview someone … you never know what you’re gonna get.”

He announced that he would be doing the film with co-producer Dean Falcone in 2008, while on an episode of WNPR’s The Colin McEnroe Show. But he and Falcome hit a roadblock: Sally’s and Modern weren’t well documented. Finding archival material took time, and the help of local culinary historian Colin Caplan. Then there was the issue of perfection: the pizza places were also essentially “my backyard,” Bechard recalled, so the film had to be seamless.

In the film, Bechard traces a doughy arc of history, starting with Italian immigrants to New Haven’s Wooster Square neighborhood and ending with the three restaurants today. In between, he outlines not just the three hallowed sites, but the city that has made them tick, with its own decades of change. Fully-crisped stories pour forth from community members, artists, and politicians who swear by New Haven pizza.

In one vignette, Michael Bolton waxes so poetic about Sally’s, it’s astounding that his shirt is still on at the end of the sequence. In another, U.S. Sen. Chris Murphy recalls the early days of dating his wife, when she lived around the corner from Modern and it became their spot. In a third, musician Lyle Lovett opens his mouth to praise the charred concoction, and his pizza gospel comes out in full paragraphs.

Through the project, Bechard said his takeaways were as culinary as they were technical. In one of his favorite moments during filmmaking, he and co-editor Brianna Marcosano joined Modern Apizza owner Bill Pustari on a Monday afternoon, when the restaurant was otherwise closed for business. First the three just sat and talked. Then Pustari prepared and rolled out the pizza dough, preparing four pies. Bechard watched Pustari intently, soaking in every fact about char, high milk fat concentrate in cheese, and working dough. Then they sat and ate together.

“We were there for three hours,” he said. “One of the greatest three hours of my life. To have Bill explaining the pies, cooking the pies, and then eating the pies. If you’re thinking of your favorite restaurant, your favorite chef, and they’re just doing it for you … imagine that, and that’s what this was for me. It was just ecstasy.”

As it plays to a home crowd this weekend, Bechard said he hopes that the film resonates far beyond New Haven (it did very well at the Independent Film Festival Boston in April) and inspires pizza tourism for foodies across the U.S. He has an eating schedule ready to go for those willing to make the trip: Pepe’s at 11 a.m., Modern at 1 p.m. and Sally’s at 3 p.m. And then, maybe, a nap.

“This is like, it’s our three-star, Michelin restaurant,” he said. “It just happens to be three pizza places.”

Pizza, A Love Story has two showings on Saturday, June 1. To listen to the episode of WNHH's "Kitchen Sync," click on or download the audio above. To find out more about the New Haven Documentary Film Festival, check out its website. This article is provided in part through a content share among the Arts Paper, WNHH Community Radio and its longstanding news affiliate, the New Haven Independent.