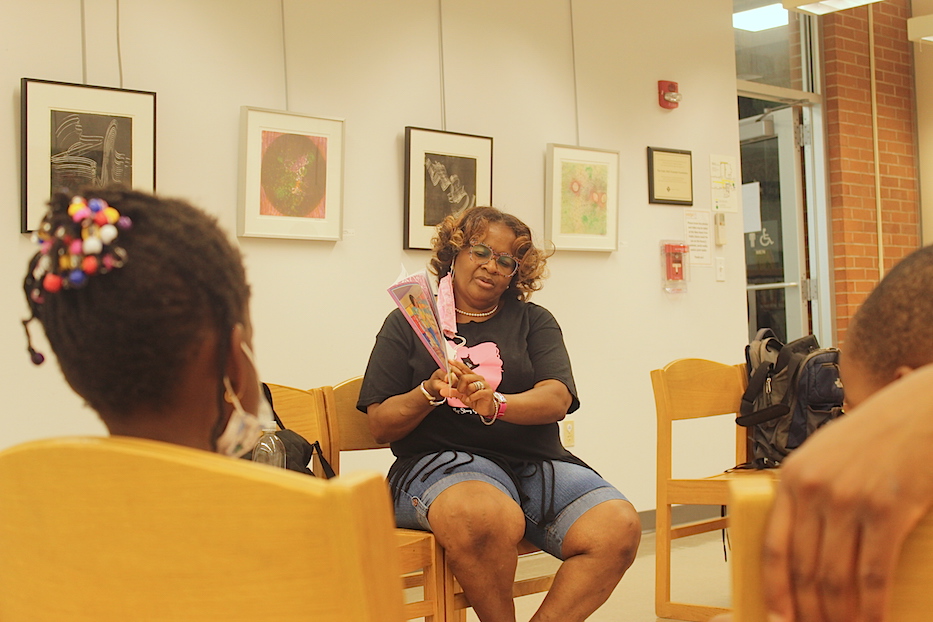 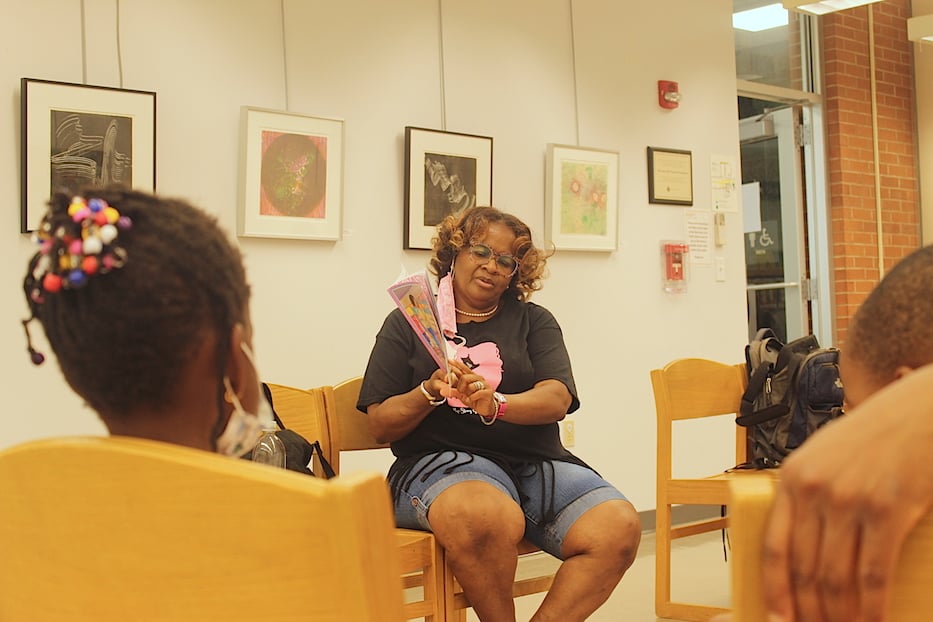 Nimat Osmanu’s tiny hands grasped a handful of pink and purple beads, threading them onto a plastic armband. The New Haven author and educator Stacy Graham stood over her, helping Nimat clasp the completed bracelet onto her wrist. To Graham’s right and left, seven other kids beaded bracelets and colored in a black-and-white drawing.

It echoed Graham’s recently published picture book, which includes a scene featuring a mother and daughter making crafts together.

Last Wednesday afternoon, Graham read from her book A Day With My Mom, illustrated by Kavion Robinson, to a group of children and their caretakers at the Mitchell Branch Library in New Haven's Westville neighborhood. A longtime educator and self-published author, Graham stressed the gratification of seeing her words in print. Approximately 15 people attended the event.

A Day With My Mom is an autobiographical story about Graham’s relationship with her late mother Naomi Kelly that follows the pair’s adventures over a single day. Born and raised in New Haven, Graham published the book in January 2022, after a six-to-seven-month-long writing process. Since then, she has been selling the book at local author events and online.

Graham was committed to the process, she said, but didn’t know how to navigate the publishing process. Making a living in the publishing industry is a struggle not only for Graham, but also for Black authors and publishing industry professionals nationwide, many of whom experience pay inequity compared to their non-Black counterparts, according to the New York Times.

“For probably about 20 years, I always desired to write. But I had no idea how to get started,” she said at the beginning of her reading.

Getting connected with Latoya Wakefield from Kingston, Jamaica, was a crucial step in her journey. Wakefield shared the pros and cons of signing a book deal with Graham. Graham eventually took the self-publishing route because of the freedom it provided her. She could sell her book to whomever she wanted, without “getting locked in,” she said. 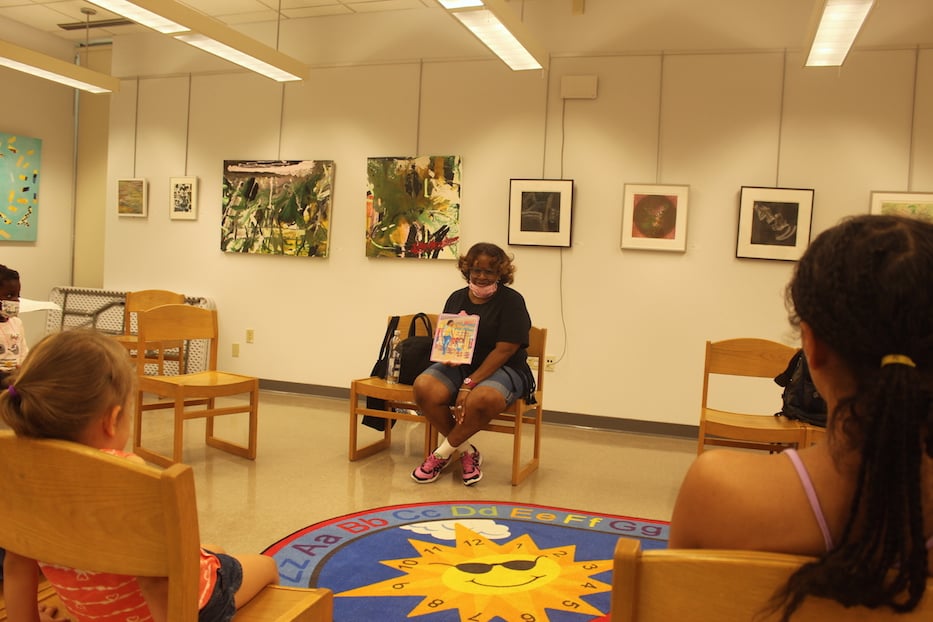 A major motivator throughout the process was Graham’s special relationship to her mother, who was her best friend during her childhood. Graham remembers always following her around and wanting to be physically proximate to her. She passed away last year at the age of 80, just eight months before the book was published.

The front dedication page includes a black and white illustration of Kelly, who wears a sweet smile across her face. Kelly worked when Graham was a girl but still found the time to share special moments with her. Graham weaves some of those special moments into A Day With My Mom.”

On the day the mother and daughter characters share with one another, the two wake up and don matching tie dye outfits (tie dye was a favorite activity of Graham’s as a child). They stop by the nail salon and get their nails done. At the end of the day, they eat ice cream and do crafts on a blanket in the park.

That ice cream scene was especially appealing to the kids in the room. After she finished the page, Graham surveyed the kids about their favorite ice cream. 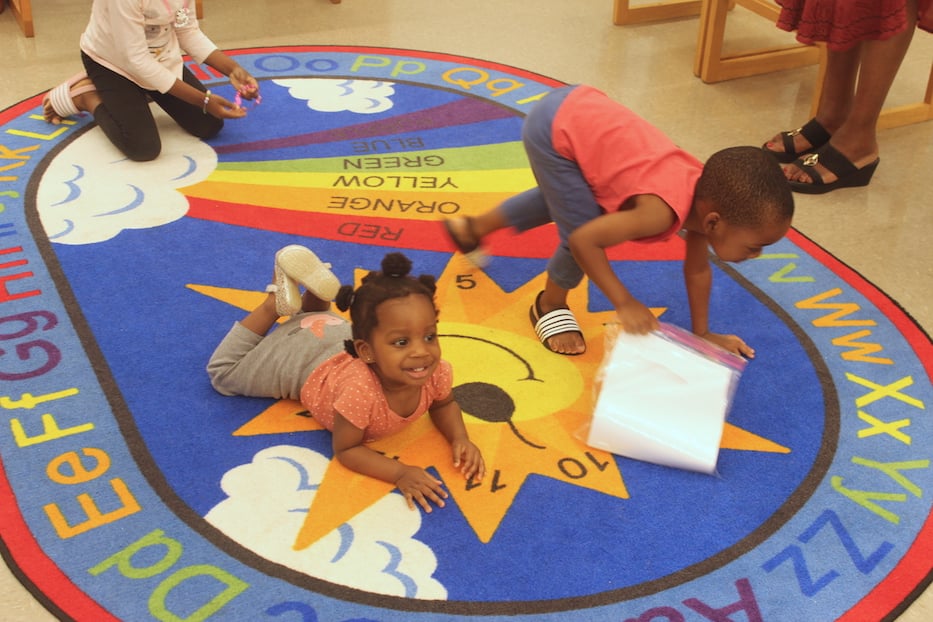 The sisters Noelle Morisseau and Blanche Filipczak sat in wooden chairs around the rainbow reading rug, cooling off a long day at summer camp. As Graham read, they shared a private moment. Morisseau brought her face close to Blanche Filipczak to whisper something in her ear. Then, Morrisseau reached out her hand for a pinky promise.

Across the room, Adzo Akoesso sat with her three kids, five-year-old Nimat, two-year-old Naeem, and one-year-old Nailah, who wore complimentary animal-themed outfits. Older sister Nimat raised her hand, modeling participation for her younger siblings. Middle child Naeeem wrapped an arm around baby Nailah’s shoulder, who swiveled around the room, taking in the scene. 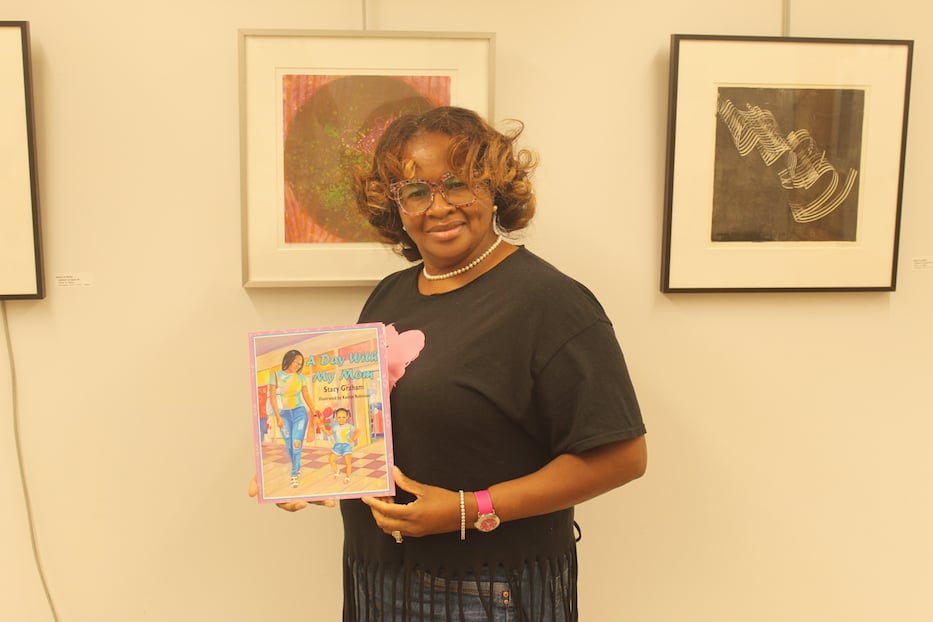 Graham currently lives in Quinnipiac Meadows. For over 30 years, she’s worked full-time as a kindergarten teacher in the New Haven Public Schools. After publishing her book, the preschoolers through third graders at Ross Woodward Classical Studies, where she currently works, were some of her first readers.

“I felt honored that I got to share the book with the school where I worked,” she said.

For now, her mom remains at the top of her mind. Her next book is going to be about a vacation with her mom, tentatively titled Going on Vacation with Mom.

She has advice for other aspiring authors: “Don’t give up. Keep trying. Even though the journey seems long, stay on it.”