Afro-Funk Gets The State House In A Groove

It wasn’t long after Kaleta & The Super Yamba Band took the stage that horns were floating over the audience, silky smooth and instantly danceable. From the stage, the two-piece brass section cut through the rhythm of bass and drums like it was announcing the band's arrival. No lead singer had come up to the mic yet. The sax player paused and leaned into his mic.

As soon as the sax player had introduced the group Thursday, it became clear that someone was still missing. There was no lead singer on stage. Or lead guitar. A few minutes passed, and the horns dropped out again. The music got a little quieter. The sax player called on the piece they’d been waiting for: the aforementioned Kaleta.

A middle-aged man dressed in dark colors walked onstage and grabbed a guitar from its stand. He began to play, and the band returned to full volume. The guitar wasn’t loud enough; he adjusted the knobs on the amplifier beside him. He played on, still silent. When he finally opened his mouth, he didn’t sing so much as shouted urgently, in an unspecified West African tongue.

The voice was much louder than anyone seemed to expect, drawing the crowd even closer to the stage. Every so often he threw in a James Brown-esque wail or grunt. 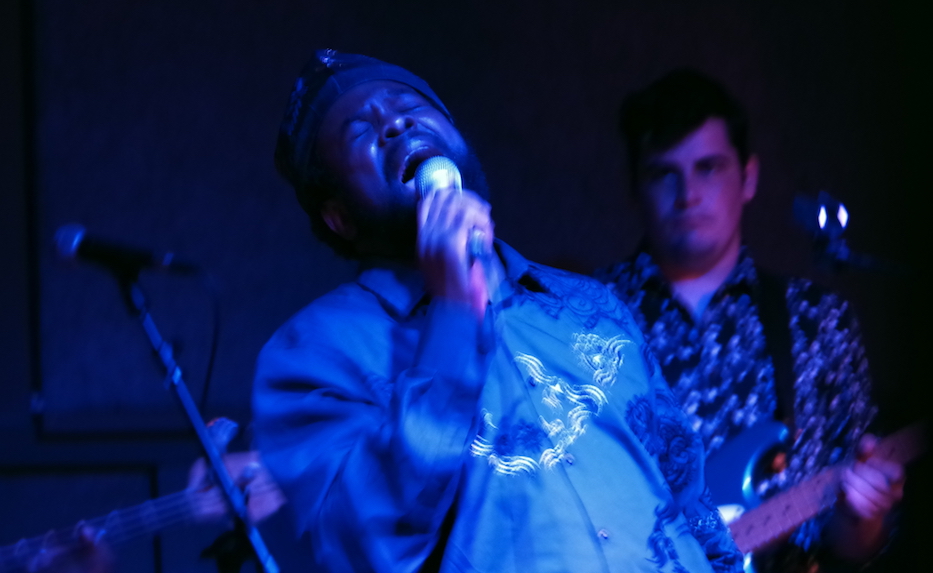 Those references go back to the singer’s roots. When Kaleta was a young boy growing up in Lagos and school wasn’t in session, his older brother would lock him in a room and play him records all day. Among the artists he was exposed to during this music boot camp were James Brown and Fela Kuti. Among the few words he spoke to the crowd on Thursday, most were words of praise, admiration, and gratitude for the music of two legends. As the State House's Carlos Wells pointed out after the show, Kaleta also played for King Sunny Ade and was a member of Fela Kuti's band in the 1980s.

But while the singer appeared to be clear acolyte of James Brown, Kaleta did not share his influencer’s flair for theatrics. James Brown was a famously large personality, which lent itself well to his manic, flamboyant stage shows. Kaleta and Super Yamba Band was a milder affair, less centered around the main performer and more about the band working together.

Counting the singer-songwriter himself, the group is a six-piece band and every piece seems to matter. The band's sounds came through one by one Thursday: rhythm guitar brought to mind reggae, the congas rang out like Salsa, bass and horns brought the funk.

Every member of the group, it seems, is a multi-instrumentalist, and Thursday night they all got moments to shine. One song featured no bass for two full minutes, before it came rumbling in and carried away the song. But that wasn’t all: the song was also peppered with short busts of flute, played by the sax player. Another song featured no spoken or sung words, only deep, evocative grunts. And another gave a full, center-stage solo to the West African talking drum.

One standout track came about midway through the performance. After Kaleta—having now broken out of his quiet shell— led the audience to sing and dance along with a groovy, bass-driven track, the band played its recently released single “Mr. Diva.” Their funkiest track of the evening, “Mr. Diva” was punctuated by a whining keyboard and big, brassy horns that seemed to be the fanfare that accompanies the eponymous character when he steps into a room. Other times, it was a low-key jam bolstered by a healthy serving of conga and talking drum.

It wouldn't have seemed right for the night to end without a Fela tribute, so the second half of the show featured the band’s cover of the 12-minute 1971 album cut of “Black Man’s Cry.” Kaleta brought all the passion from the original, with soulful cries that band members carried to the heavens on a bouncy beat. As they played what may be one of the great bass lines in music, the band didn't disappoint.

Though the crowd was sparse, it was full of fervor. There was not a single person who wasn't dancing to the hypnotic sounds from the stage. During a mid-set break, as people smoked outside, a young lady burst out of the State House with a signed poster in hand. She rushed off to stash it in her car, lest it get damaged during the second half. Most of the rest of the conversations came from folks lamenting that there weren't more people there to see the show.

The next time the band comes through town, though, there will be. Probably, they’ll be regaled by the legend of when Kaleta and Super Yamba Band came to the State House and kept the spirits of Fela Kuti and James Brown alive.