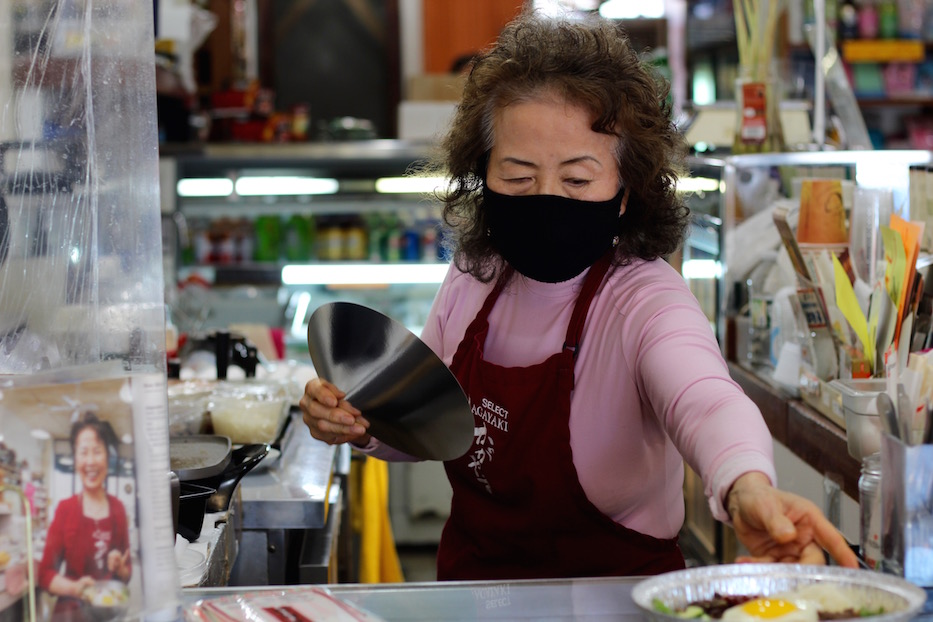 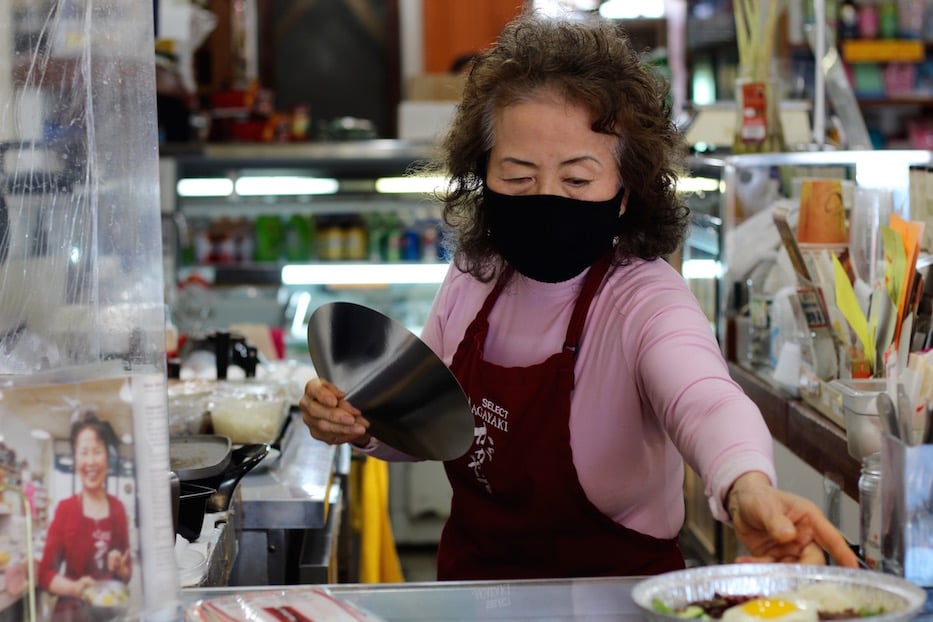 Yoon-ock Kim took over Oriental Pantry to bring the tastes of her native Korea, as well as hard-to-find ingredients from Korea, Japan, Thailand, China, and India, to New Haven. Over three decades later, she is hoping that her homegrown business can weather a global pandemic and recent burglary.

Kim—or as she is known to many who love her, Mrs. Kim—is the owner of Oriental Pantry & Gifts, a culinary gem on Orange Street where refrigerated cases of kimchi, seaweed salad, homemade ssamjang, pastel-colored mochi, miso, and fresh herbs sit among shelves stocked with tea, spices, chili paste, and a symphony of sake cups, ceramic plates, hard-to-find candy, puffed rice crackers, and fleets of dried ramen, soba, and udon noodles.

In the past 12 months, Kim has watched revenue slow to a trickle as Covid-19 ravages small businesses across the city. Last Sunday, the shop was also the victim of an early-morning break in. There is currently a GoFundMe campaign to cover lost income and repairs, including those she has already made to her front door. By Tuesday night, she had already raised over $10,000.

Kim said she does not believe the break in was racially motivated, but has been deeply upset by the mass shootings in Atlanta last week and Boulder, Colo. Monday evening.

“Business is almost dead,” she said Tuesday, sautéing slices of firm tofu as they browned at the edges. “It’s very, very bad. I’m worried about closing, but I don’t want to close. I love it here. I love this community. For myself, I don’t feel any discrimination. I feel very safe here.” 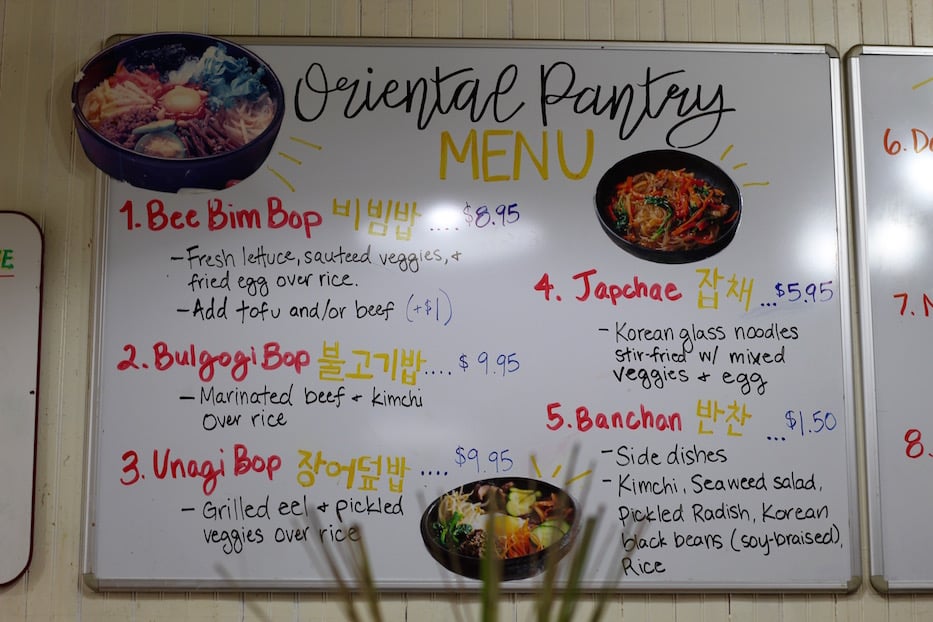 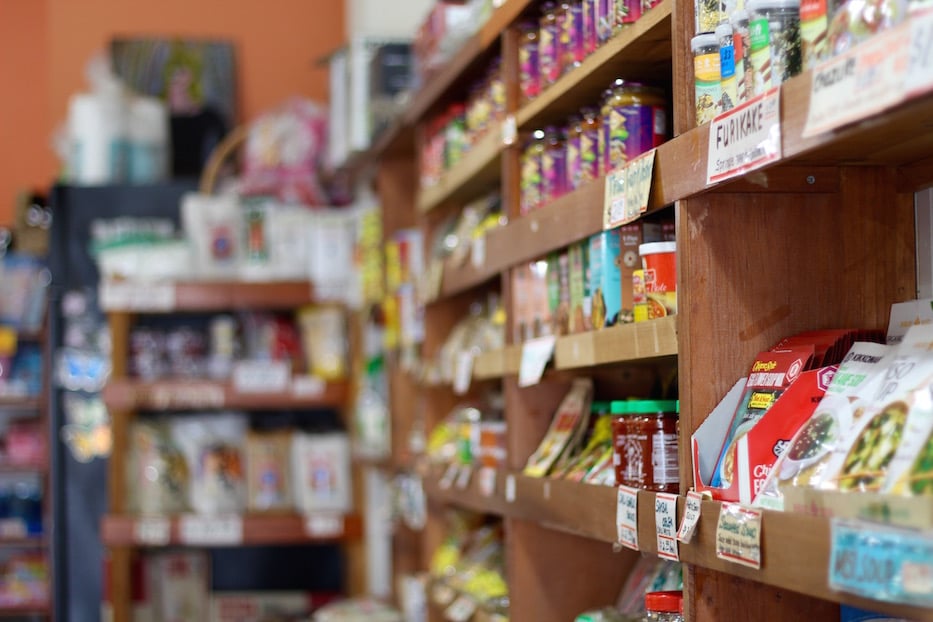 Kim arrived in New Haven in 1978 with her husband, then a graduate student at Yale University. At the time, there were almost no places in the city to find ingredients that reminded her of home, where her family owned small restaurants in Busan, and later in Incheon. When she discovered a Korean grocer on Whitney Avenue, she was thrilled. She and the owner became fast friends as Kim navigated work at the university and started a family at home.

“It was very different then,” she said. There was a small Chinese-owned grocery store on Crown Street downtown, but many of the city’s other Asian markets had not yet entered the fore. When the owner asked her to take over the store in 1985, she quit her university job and said yes. She moved to her current spot, a sun-dappled storefront on Orange Street, around 2000. For those who know it, its fluorescent open sign and deep green awning have become a familiar beacon in a changing city.

During those early years, Kim learned how to be a small business owner while also raising three kids at home. She has designed the shop to feel like “a small Korean department store,” where her customers can do all their shopping at once, or come by for a head of napa cabbage, tub of white miso, or last-minute bag of rice flour.

Inside the store, kits for making candied sushi sit just a shelf away from green and red jars of chili paste and gold-tinted boxes of curry mix. Pre-measured bags of Thai basil and dried oregano join red and yellow containers of Korean hot pepper. Slim boxes of chocolate, strawberry, and matcha flavored Pocky eye customers temptingly from the front counter.

In addition to fresh and shelf-stable ingredients, Kim prepares fresh, warm meals on a single, long hot griddle behind the counter, where clouds of steam rise from shiitake mushrooms, white ribbons of radish, eggs, beef, and bellflower root. She plays a mix of classical music and public radio, the soundtrack to her culinary ballet. A portable phone rings every so often, perennially removed from its cradle. 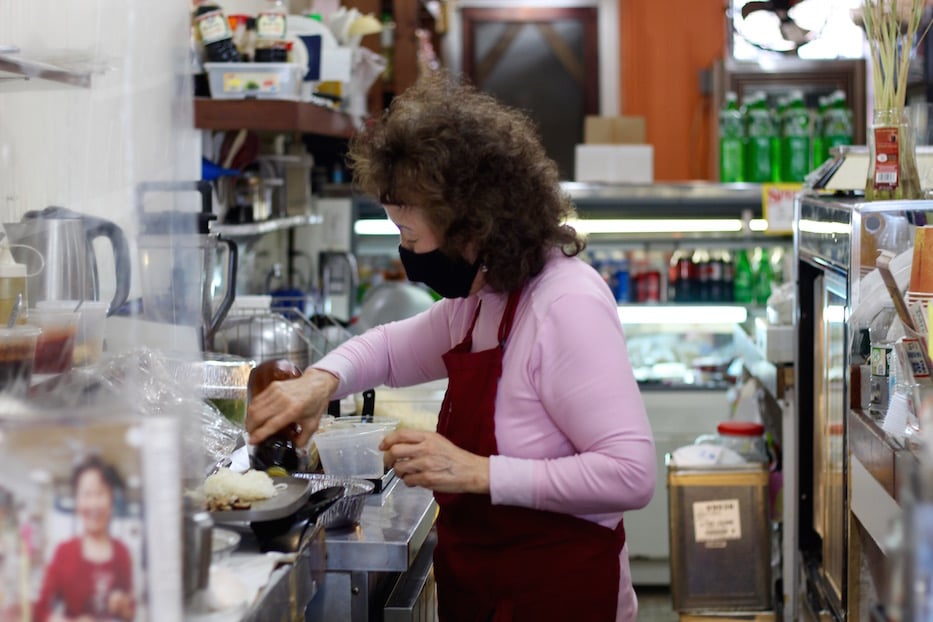 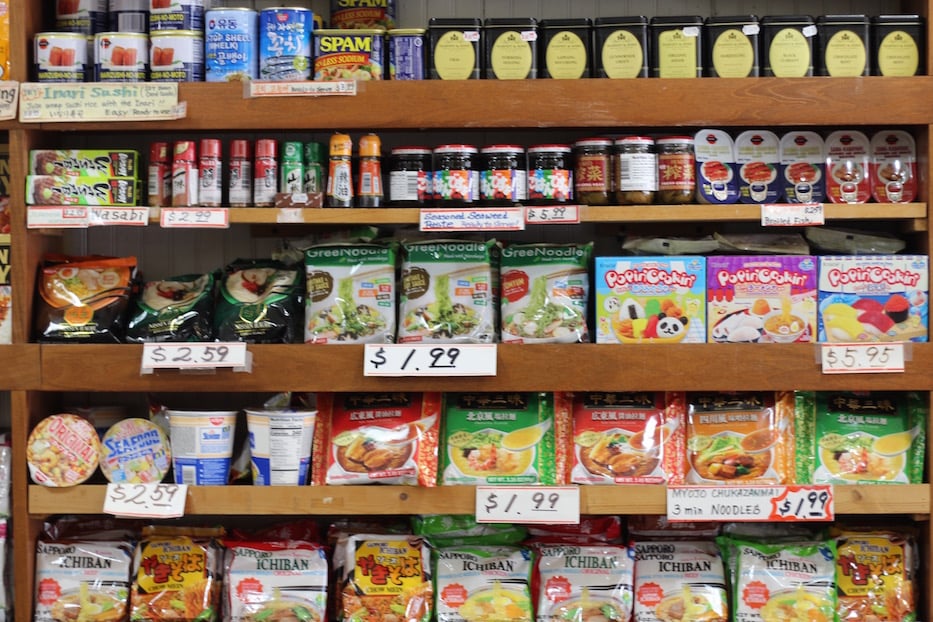 Tuesday afternoon, a reporter’s clipped voice read the names of the ten victims killed in Boulder Monday night. She shook her head at the news. She said that this year has struck her as particularly violent; she worries every time she hears about another shooting.

Before Covid-19 hit New Haven, “it [business] was really good,” she said. Since 1985, Kim has built a customer base that is as wide-ranging and polyphonic as the city itself. Several of her customers are Asian and Asian-American students who come from the university looking for a taste of home. But several are also white, Black, and Latinx, from college students to delivery drivers to new parents who live down the street.

She has gained a faithful following among townies, some of whom make monthly pilgrimages and have discovered that her bibimbap is the cure-all for a rough interview, break up, bout of homesickness, rainy day, or simply an empty belly. After months of slow business, she shortened her daily hours but chosen to remain open, particularly for customers who can’t find ingredients anywhere else.

Now, she is hoping that she will be able to make it through the slowest economic year she can remember. Going into this month, Kim was already several months behind on rent. Then last Sunday, someone broke into the shop around 1:30 in the morning. When Kim arrived, she noticed damage to the front door. Several hundred dollars had been stolen from the cash register. The business is not insured through her landlord: any damage to the property is her responsibility.

It seemed like the person was in a hurry, she added: the area behind the counter was “a mess,” strewn with dollar bills and store equipment. She spent the morning cleaning. While New Haven police initially responded to the incident Saturday night into Sunday morning, she has not yet heard any new information.

On Tuesday, she buzzed from counter to griddle to refrigerated case, fielding questions on radish kimchi and freshly-wrapped tofu pancakes as she prepared an order of unagi bop with an egg sunny side-up in a bed of eel and pickled vegetables. She praised community members for their support on the GoFundMe campaign, which has seen support from current and former customers across the country. While those funds will cover damages to the shop and back rent, she said she is still afraid that the pandemic-era dip in sales will force her to close if business does not pick up. 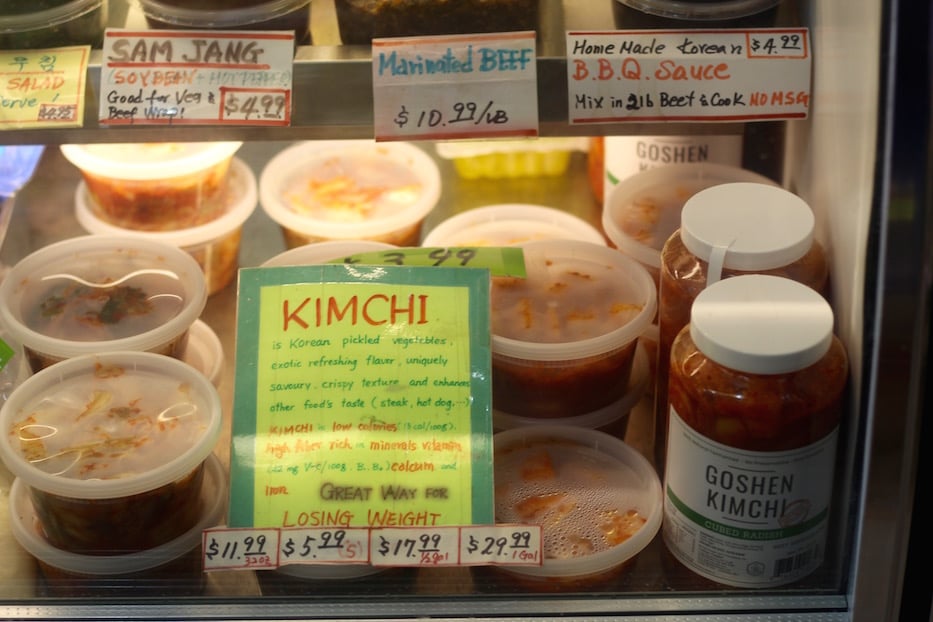 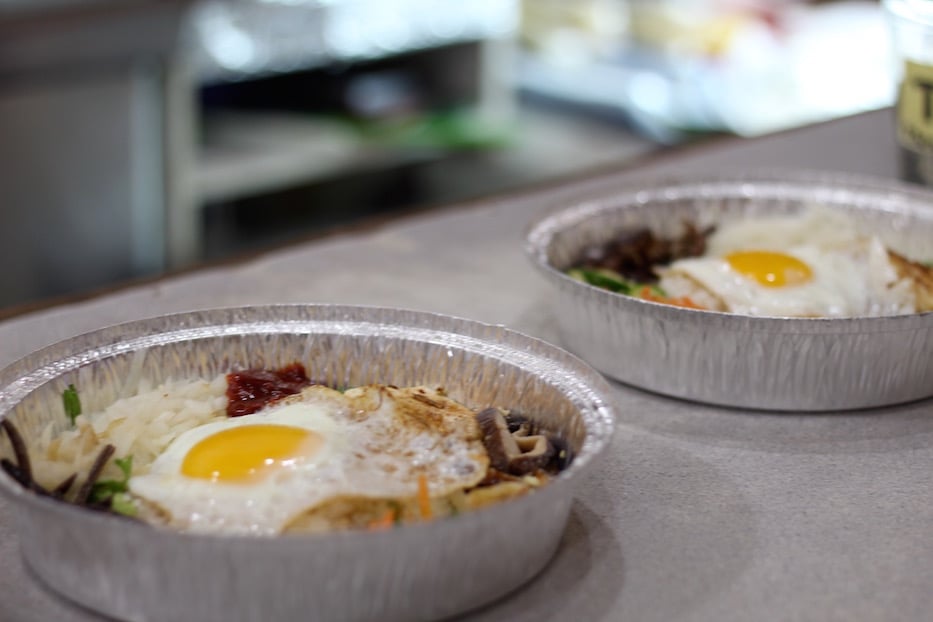 Her customers do not want her to go anywhere. On Tuesday, a steady trickle of people came through the shop, with orders that ranged from her celebrated bulgogi bibimbap to a single box of jasmine tea or pint of black sesame ice cream. Some asked about the break in in quiet tones, leaning in at the counter and whispering beneath their single and double masks. Others hadn’t yet heard the news, and had stopped by on routine errands that included the shop.

Yale Senior Lara Schall started coming to Oriental Pantry about a year ago, after she moved into an apartment in East Rock and began cooking more for herself. Born and raised in London, Schall grew up learning to cook Korean food from her mom, who is Korean. When she started looking for ingredients, her grocery list led her to Oriental Pantry. After hearing about the burglary on Monday, she and a friend headed to the shop to pick up lunch and cooking supplies.

So did fellow senior Michelle Tong, who is studying mechanical engineering and architecture at Yale. After hearing about the break in on Monday, she headed there for a box of tea and plans to return with a longer shopping list later this week. In the wake of last week’s shootings in Atlanta, she said that New Haven’s Asian-owned businesses have already been more on her mind than usual. 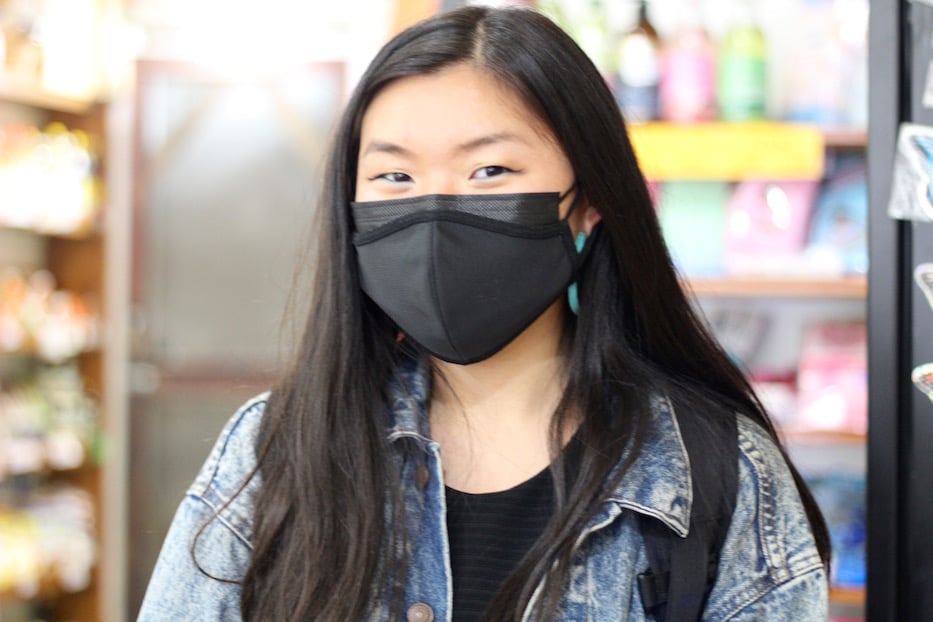 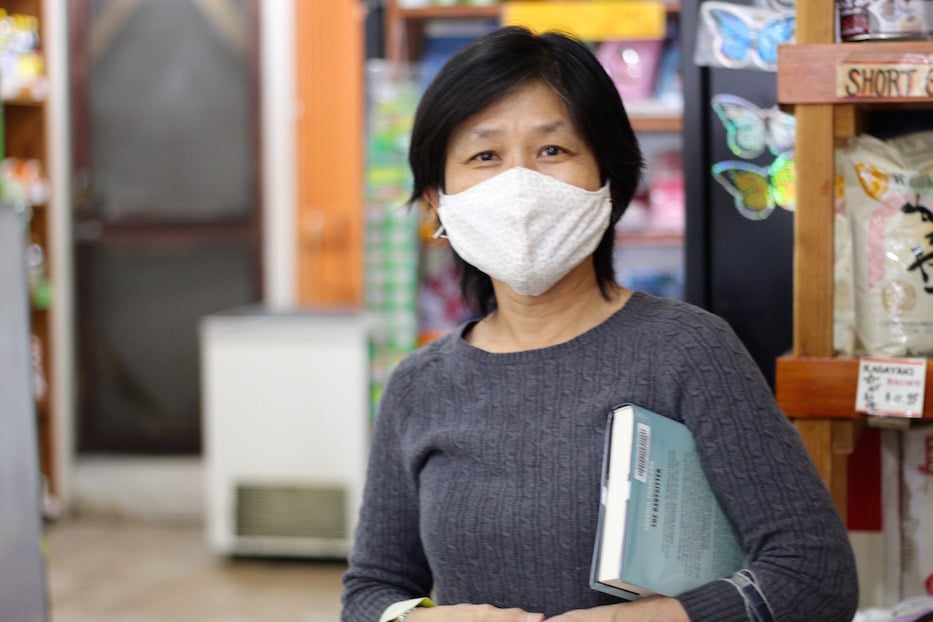 Top: Michelle Tong, a senior at Yale who is majoring in mechanical engineering and architecture. Bottom: Isabelle Chen.

While “I could be better,” she added that the violence has spurred a number of "important conversations" in her classes, and among white peers. In their remaining time in New Haven, she and her roommates have vowed to invest more in local businesses like Oriental Pantry.

“We don’t eat out very much, but we all agreed that we wanted to make more of an effort,” she said of supporting the business. “It’s something I’ve been thinking about especially with the events last week.”

Driving in from her home in Killingworth, Isabelle Chen had not yet heard about the break in when she arrived for her semi-monthly ritual of vegan bibimbap. Born in Taiwan, Chen fell in love with Korean food in the 1990s and early 2000s, while living in Korea for seven years. In Killingworth, which she described as very white and “very rural,” the right ingredients are impossible to find. She drives an hour each way to shop in New Haven.

After depositing her own take out containers on the counter, she searched the shelves for familiar ingredients, lifting two purple yams delicately from their box.

Back at the counter, Kim picked up the phone and beamed at the voice on the other end of the line. It was a Yale professor who was calling all the way from Seoul, where he is currently staying for research. News of the break in had reached him that morning. Kim assured him that she was fine. His voice, which moments before had been asking for details on rent, relaxed on the other end.

“I love my community,” she said into the receiver. “They support me a lot.”