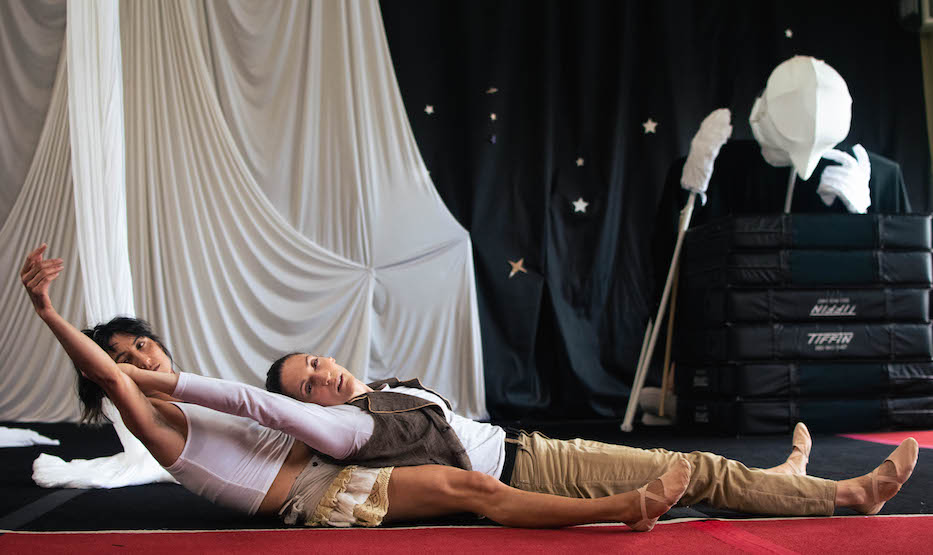 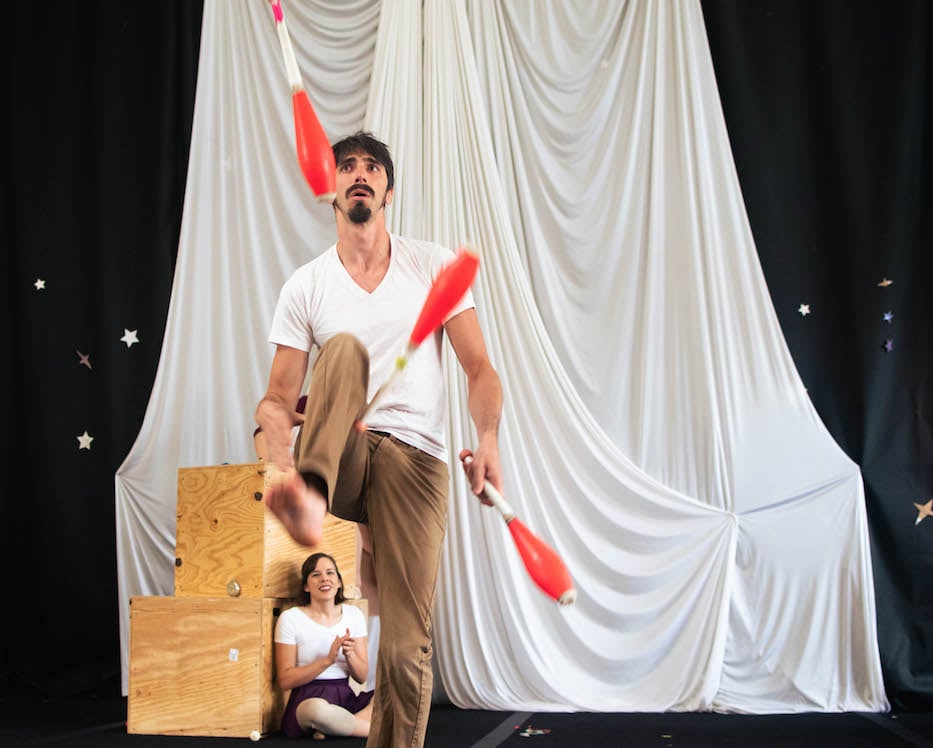 Juggling pins arced up and back down. Batons spun in dizzying spirals high off the ground. The performers at Air Temple Arts, a circus and aerial studio, rehearsed effortlessly, twirling and tossing the items. In their hands, the pins and batons hung in a continual state of motion, as if the objects had come alive themselves.

These acts are all part of Heaven or California, a circus performance based  on the story of the Donner Party coming to Air Temple Arts this week. The show is directed by Liz Richards, a theater and circus artist, and performed by students and coaches from the studio.

Performances will be at the Air Temple Arts studio in Woodbridge Saturday, July 10th, at 1 and 6  p.m. Tickets and more information are available here.

Although the studio regularly puts on performances, Heaven or California is the first one to re-enact historical events. In the spring of 1846, a group of 87 pioneers called the Donner Party headed west from Illinois to California in search of a better life. 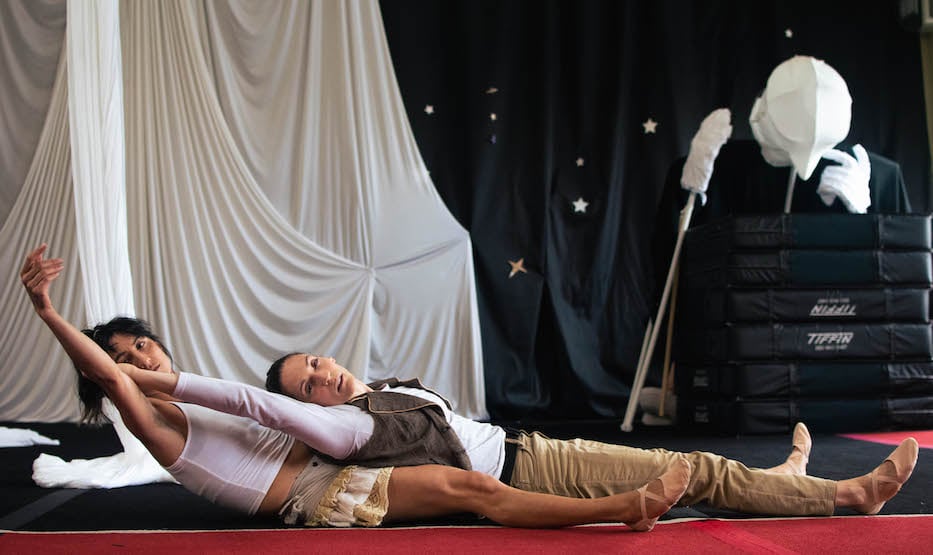 They decided to take a new route known as the Hastings Cutoff, convinced that it would be faster and easier to travel. However, rugged terrain, a lack of water, and early snowfall trapped the party in the Sierra Nevada mountains, where they ran out of food and allegedly turned to cannibalism to survive before being rescued.

While it may seem that such disaster doesn’t play well with the circus, Richards said she wanted to use circus arts to explore a different aspect of the well-known tragedy. Long fascinated by the Donner Party, she became inspired by the book The Indifferent Stars Above by Daniel James Brown, which follows Sarah Graves and Jay Fosdick, two newlyweds who traveled with the group. The show centers specifically around these two characters, and readings from the book punctuate each act to ground the audience in historical scenery.

Richards said she also seeks to highlight a different aspect of the Donner Party—members of the group as individuals, with hopes, dreams, and optimism for the future.

“Like all people in all times the emigrant men and women of the 1840s were complex bundles of fear and hope, greed and generosity, nobility and savagery,” she read in an introduction to the show. “And in the end, each of them was, of course, an individual, as unique and vital and finely nuanced as you or me.” 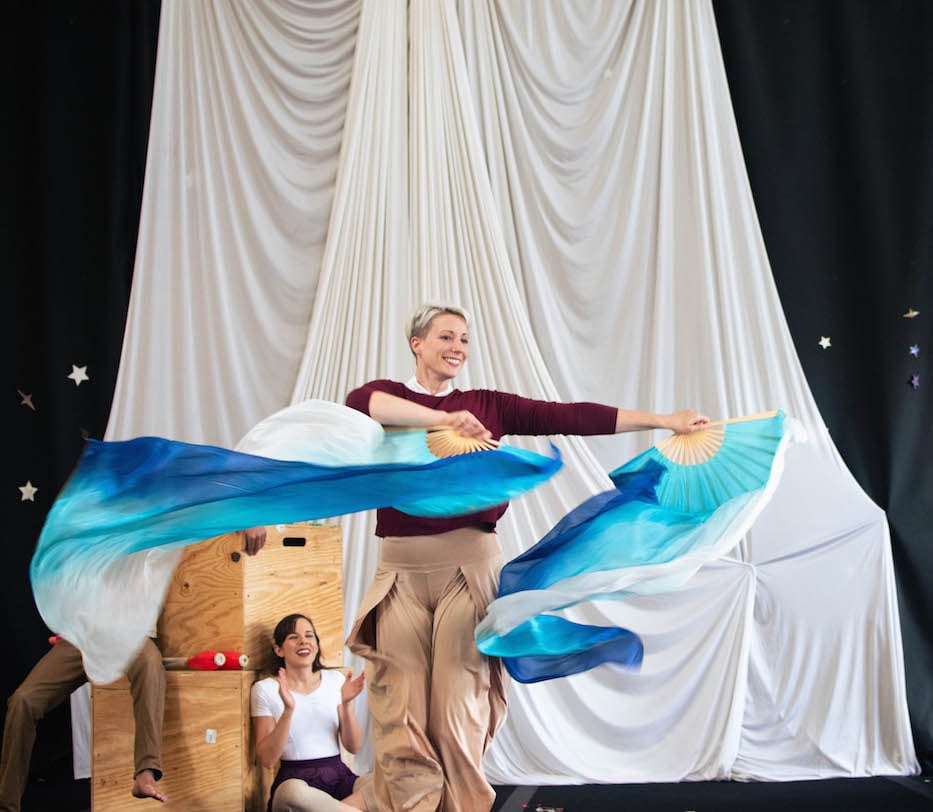 The first half of the show teems with merriment as the cast of characters develops through the circus acts. The show begins with a performer looking out into the distance, anticipating the future to come. Using ordinary cardboard packing boxes, the cast evokes a sense of eager preparation, tossing the boxes back and forth in satisfying coordination.

When the Donner Party celebrates the 4th of July, each character joins in the festivities with a different act—one rolls a glittering dragonstaff up and down her arms, another flutters blue silk fans as she dances across the stage. Mesmerized by the performances, the audience cannot help but feel like they are getting to know the characters of the Donner Party, just as they might have gotten slowly to know each other almost two hundred years before.

Then Sarah and Jay, portrayed by studio instructors Dani Lee and Holly Gilligan, step onto the stage, and the world seems to stop around them. The two characters wander around the perimeter of the stage, hand in hand, dreaming about their future in California. They play-fight over a cardboard box. They somersault in synchrony. Jay teaches Sarah how to swing in delight on a pair of long orange aerial silks. In one climactic moment, Sarah climbs up to the top of the aerial silks before slowly rolling down the silks to meet Jay, knelt on the ground, offering her a flower as she hangs, circus-like, upside down. 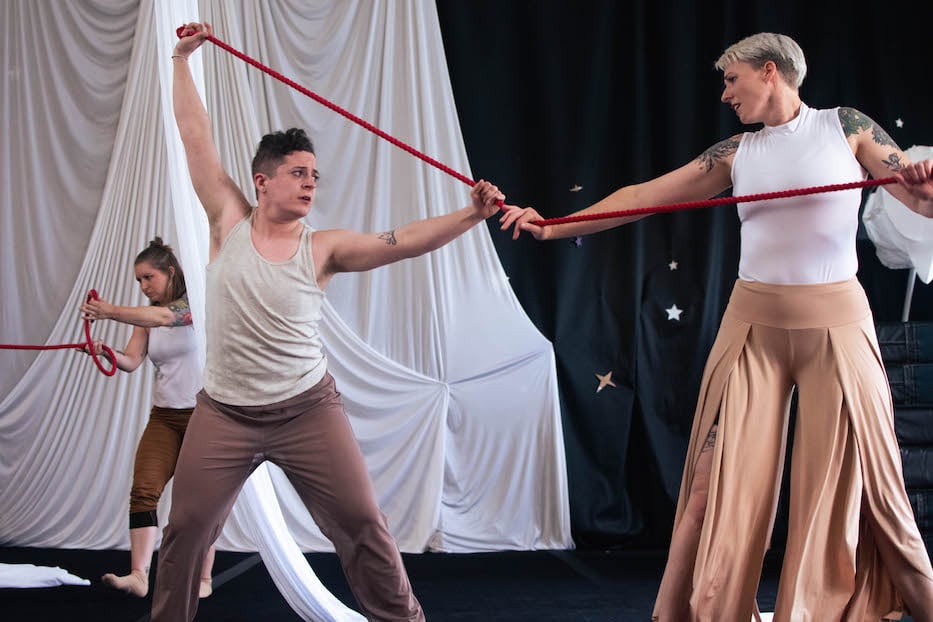 When the show takes a turn for the darker, the circus arts take on a more metaphorical role. A huge skeletal puppet wearing black tatters towers over the stage menacingly, gesturing at the characters to take the new route to their unwitting demise. A white aerial silk becomes a snow mountain, slippery and unsurmountable for a solo climber. After one character collapses of fatigue, the others gather around and draw entrails signified by thick red rope from his body.

The music, too, adopts a mournful and almost abrasive tone. As the characters express fatigue and despair onstage, words are put to the music for the first and only time in the show, “Nowhere left to go, but going’s all we know...there ain’t no glory in the West.”

From start to finish, the performance combines dance and sport to bring home the emotional valence of the story of the Donner Party, in all its joy and grief. Together, music and motion keep the audience captivated by the story and the sheer aesthetic of the circus arts. At the end of the performance, the performers smile, wave, and bow. They put away their juggling pins, batons, and silks, and the items seem suddenly, mysteriously inanimate.

To learn more about the performance Heaven or California at Air Temple Arts, visit its website.