In Branford, An Artist-Healer Gets Her Due 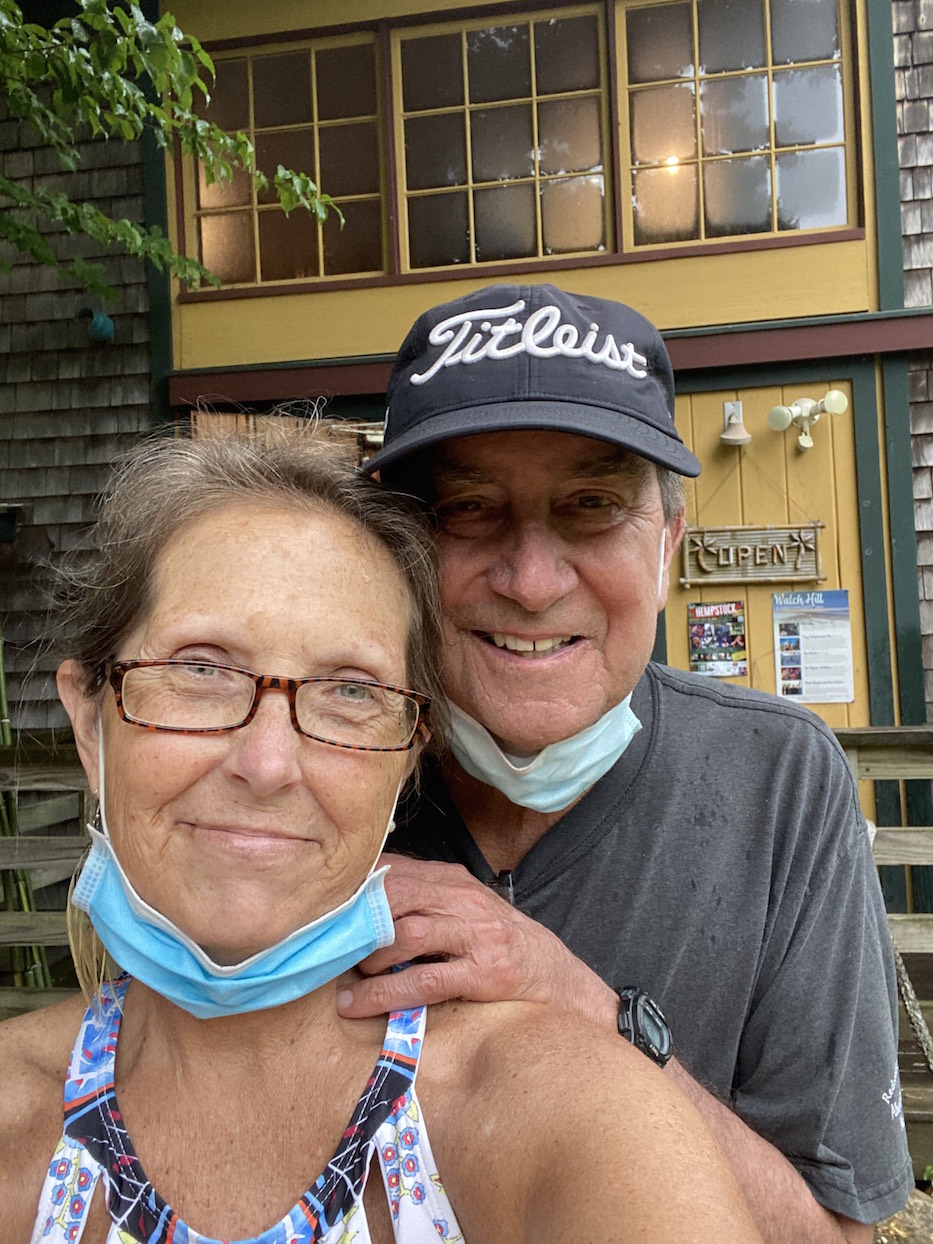 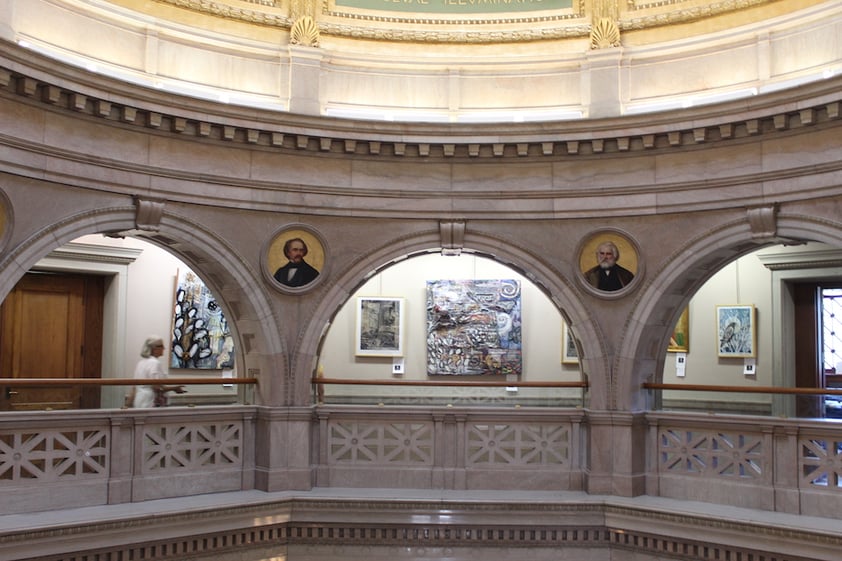 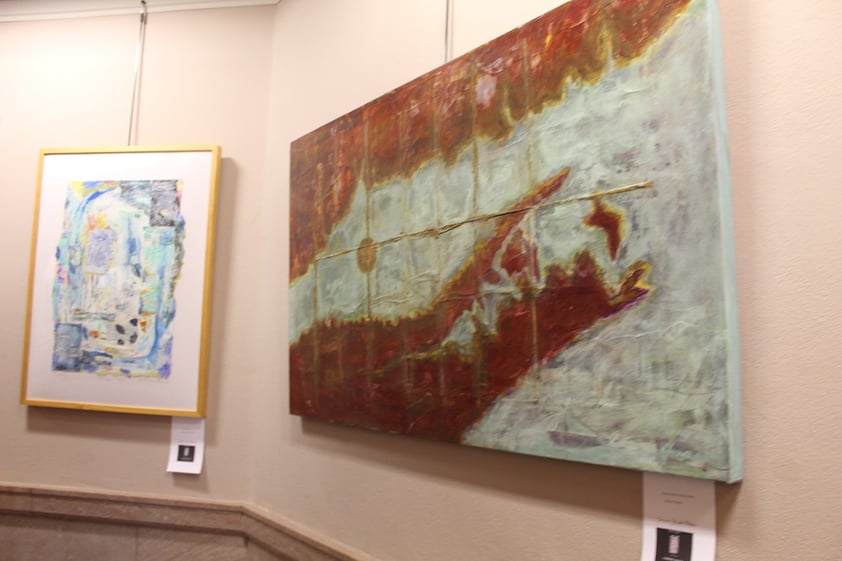 Some of the work in Yvonne Gordon Moser Art Retrospective 1997- 2022. Amelia Stefanovics Photos. The image of the artist and her husband below is contributed by the artist.

An ink pad, cardstock, and blade of grass were all that artist Yvonne Gordon Moser needed to create an exact replica of nature. As she carefully extracted the finished result, she set another piece of cardstock on the paper and inked it. The print had an undulating effect, and the grass looked like a ghostly pale shadow of the real thing.

Moser was making what is known as a ghost print—a print-on-a-print. The ghost print, although not the original, looked even more mysterious than the stark black-and-white first copy, which is called a monotype. 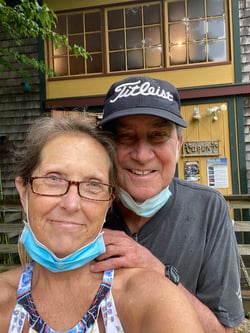 Moser recently brought that technique to a printmaking demonstration at the James Blackstone Memorial Library in Branford, where 25 people gathered for the opening of Yvonne Gordon Moser Art Retrospective 1997- 2022. The exhibition, which hangs in the library’s bright rotunda, will be up through the end of August. A closing reception is scheduled for August 27.

“Art is magic,” she said. “It can be used to safely channel the inner feelings we have trouble expressing. With art, we can translate these feelings without destroying ourselves.”

The artist speaks from experience. For over 25 years, she has devoted her life to art, particularly printmaking, with the belief that the arts heal. From 2015 to 2019, she served as the director of the Branford Art Center, a position she stepped down from when her husband, Kelley, received a cancer diagnosis and became ill several years ago. She said that art has sustained her and credits it with helping her beat alcoholism 31 years ago.

In the Blackstone Library’s rotunda, 25 years of her work adorns the walls. Many of the pieces are mixed media and monotypes, but others are monoprints—prints made from wood-block printing. There are also lithographs, stone etched prints, and cyanotypes, which are prints made using the power of the sun to etch paint patterns. 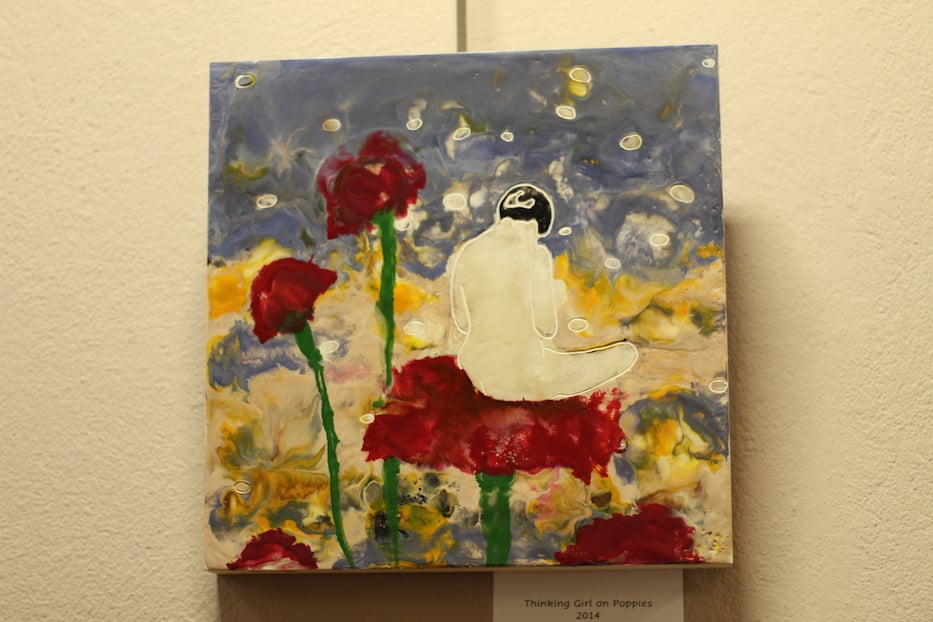 Moser strives to remain in touch with the earth in her art, she said. She reuses both substrates and materials, from painting on the other side of a finished piece to scrapping it for mixed media usage. She said that she tries not to create waste and to be a good steward of the environment.

Many of Moser’s pieces were guided by intense emotions during her life. Some translate fear and despair, while others express hope and strength. In the exhibition, several bring that emotion to the canvas, with wide-eyed and tight-lipped faces that seem to leek beyond the confines of a single work.

Her 2014 Hidden Jacket was by far the hardest piece to create, she said on a walkthrough of the show. Before the piece was finished, Moser suffered a stroke and wanted to quit smoking. She had a hard time finishing the piece, but ultimately decided to push through. Hidden Jacket was made from mixed media and acrylic paints. 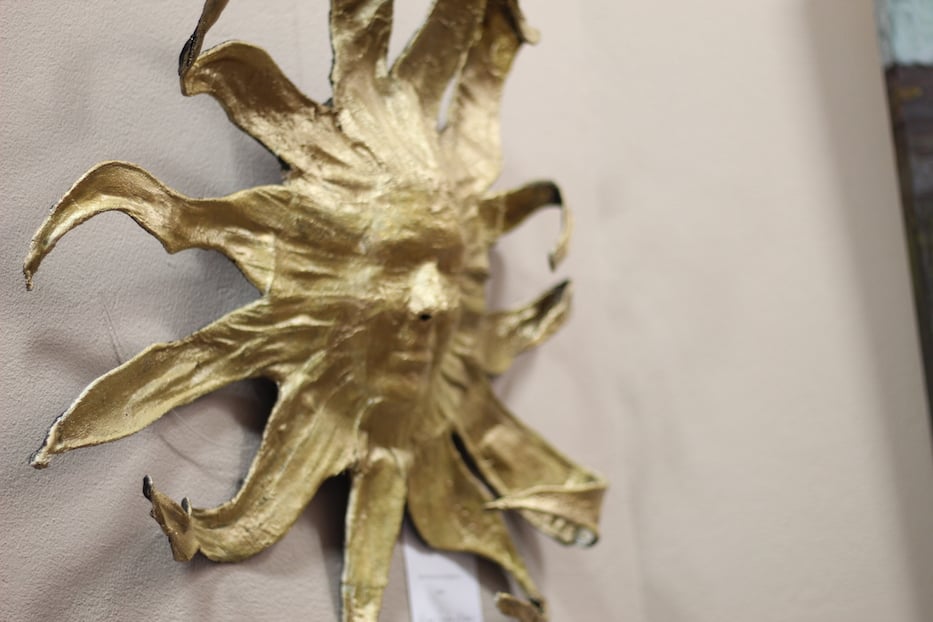 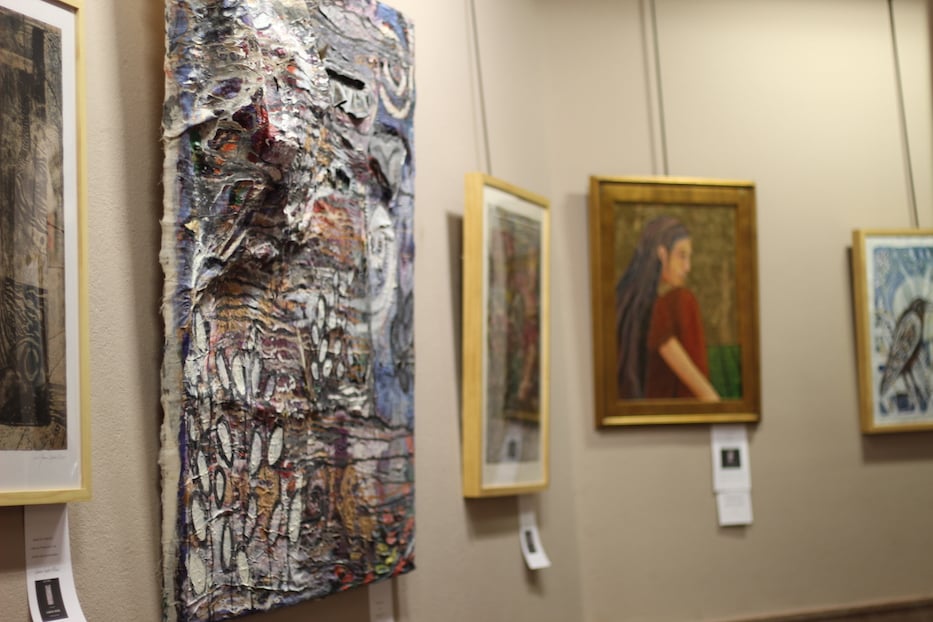 One of Moser’s lithographs on display was called Abigail. A lithograph is more complicated to make, she said, as it is printed off stone slabs. The design is first drawn on the stone with a wax crayon, and then an acid is used to etch the design through. Afterwards, the design is inked and pressed through a special press machine. Click here to learn more about lithography.

“The process time for a lithograph may vary, but it usually takes me a couple of hours to etch, ink, and press,” she said.

Moser’s work is also inspired by natural surroundings. She and her husband, Kelley, have been traveling nomads in an RV (recreational vehicle), exploring the country from 2021. Kelley is a survivor of MDS Bone marrow disease, and features in many of Moser’s pieces, both literally and figuratively. 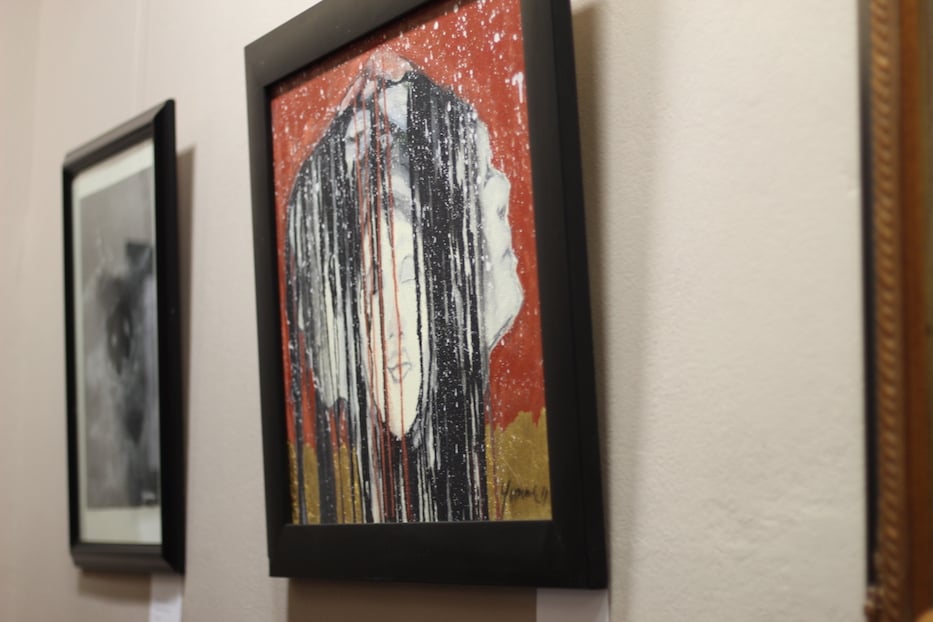 Sometimes he appeared directly in her prints, and other times his illness was portrayed in monotypes. Moser said she used art to support her husband and stabilize herself during hard times. After the retrospective closes in August, the two plan to hit the road in their RV once again.

“When I create, time slips away,” Moser said. “I keep creating and that is why I am still here, alive.”

Katy McNicol, director of the library, described both herself and the library as “thrilled” to have the works in the rotunda. She was equally excited for the live demonstration, which brings library patrons into artistic practice.

“Yvonne is a hugely talented artist and is just a warm, wonderful person to be around,” she said. “I've known her for years, ever since she opened the Branford Art Center Gallery in town. She has since turned to other projects, but we're always happy to support her efforts and share her work with the community. Yvonne is a treasure and her work is something to be savored."

Learn more about Yvonne Gordon Moser here and more about the James Blackstone Memorial Library here. This piece comes to the Arts Paper through the fifth annual Youth Arts Journalism Initiative (YAJI), a program of the Arts Council of Greater New Haven. Read more about the program here or by checking out the "YAJI" tag.  Amelia Stefanovics is a rising senior at Hill Regional Career High School.