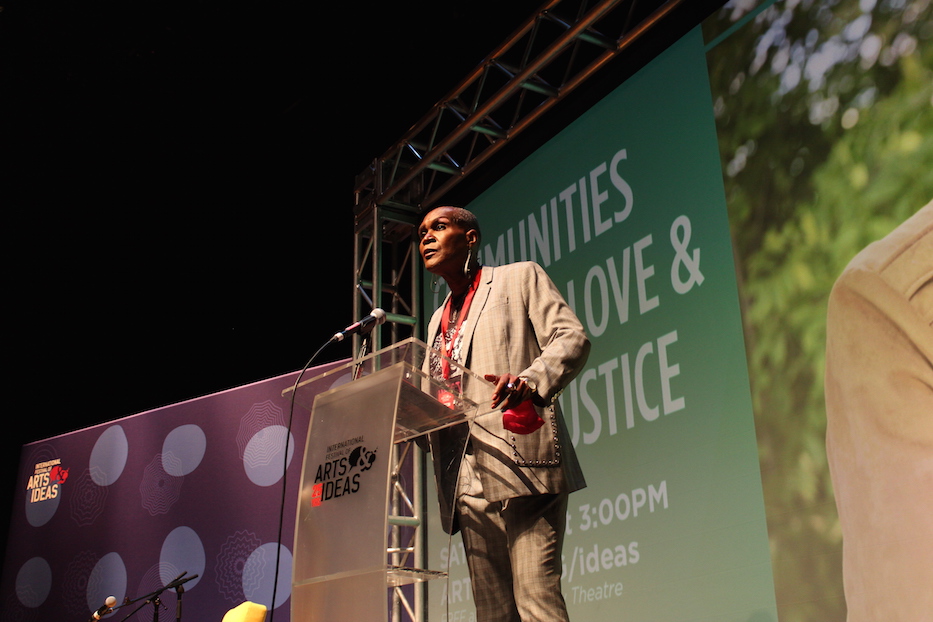 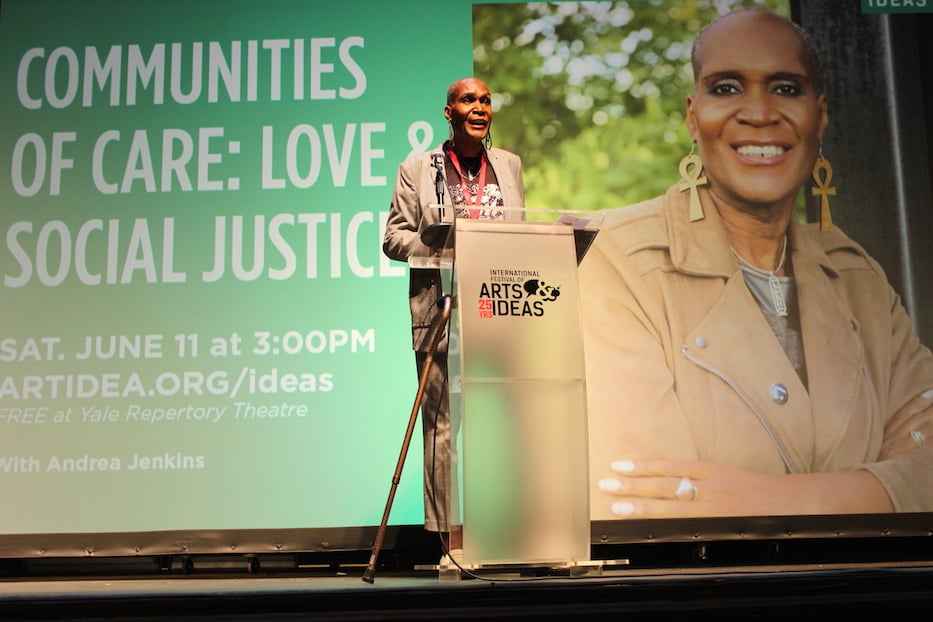 Jenkins delivered a combination talk, performance, and Q&A entitled “Black Love in the Time of Social Justice” as part of the International Festival of Arts & Ideas. Al Larriva-Latt Photos.

“Minneapolis Goddamn. We can’t breathe,” Minneapolis City Council President Andrea Jenkins declared onstage at the University Theatre, gleaming in a tailored silver suit with studded silver pockets. “The EPA eased restrictions on polluting our communities, Coronavirus attacking our lungs, America’s got its knees on our necks.”

She was reciting her poem “Quarantine Blues,” which she wrote and first performed two days after the murder of George Floyd. Floyd’s killing took place two blocks away from where she lived in Minneapolis, Minn. At the end of her recitation, with a final cry in support of Black trans women, she thrust her fist into the air.

Saturday afternoon, Jenkins delivered a combination talk, performance, and Q&A entitled “Black Love in the Time of Social Justice” as part of the International Festival of Arts & Ideas, which has over 200 events on its calendar from now through the end of June. It marked the first of over two dozen “Ideas” events set to unfold across downtown New Haven this month. Her appearance also came as part of the New Haven Pride Center's now-annual "Day of Action on Racial Justice."

Two years after Floyd’s murder, one of Jenkins’ biggest questions was: where do we go from here?  Saturday, her answer was love, art, and more love.

“The only way to fight the rampant hatred in our communities, in our country, in this world, is with love,” she said. 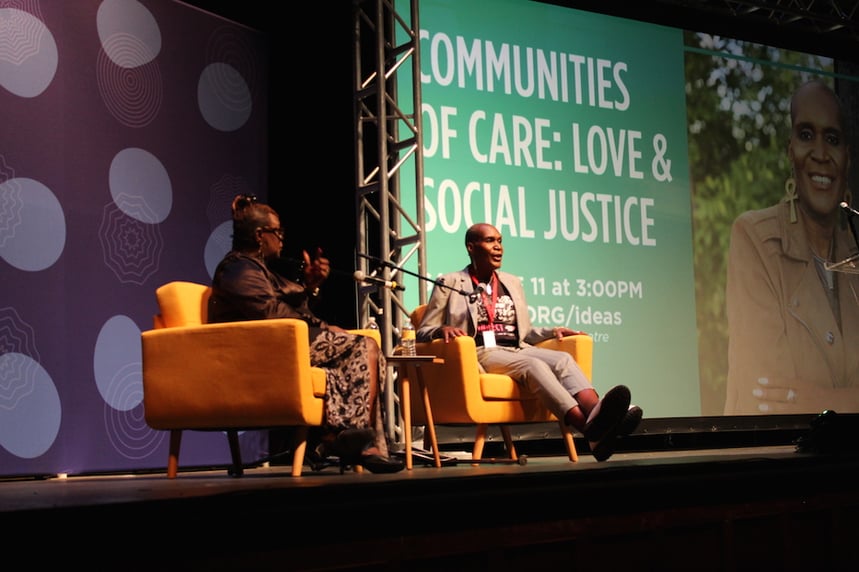 As of her January 2018 election to the Minneapolis City Council, Jenkins became the first Black “out” trans woman elected to public office in the United States. Two years later, with the murder of George Floyd by the Minneapolis police officer Derek Chauvin, she became a representative not only of Ward 8 in South Central Minneopolis, but of an entire nation.

In the moment of Floyd’s murder, Jenkins recalled, the intersection of E 38th St. and Chicago Ave. went from being the “Soul of the City to Soul of the Nation.”

She provided an acrostic definition of love straight from Tonya Allen, chief executive officer (CEO) of the Minneapolis-based McKnight Foundation. In Allen’s definition, love is a verb as well as a noun–both an action as well as a state of being.

“L—live with a sense of physical, mental, and spiritual wellbeing,” Jenkins began. “O—own their financial future, including the ability to create generational wealth.” “V—vote to protect Black interests,” she said. And “E—excel in all that they do and amplify the narratives of Black excellence.”

For the past six months, Jenkins has been putting love into practice through what she calls her “own little public art project.”  Every time she answers her email, she signs off with the phrase “Love, Andrea.” No matter the recipient, her reply is always the same: love. It is a performance that continually reminds Jenkins to love expansively and indiscriminately, she said.

There’s been another public art project in Jenkins' life, one that’s been running for a much longer period of time. For the past 20 years, Jenkins has been helping cultivate the intersection of E 38th St. and Chicago Ave into a thriving arts corridor. Her overarching strategy is centering local artists, people of color, and women.

Her efforts have helped attract organizations like the Chicago Avenue Fire Arts Center and City Food Studio, a small business incubator that has supported three Black-owned restaurants, to the intersection. 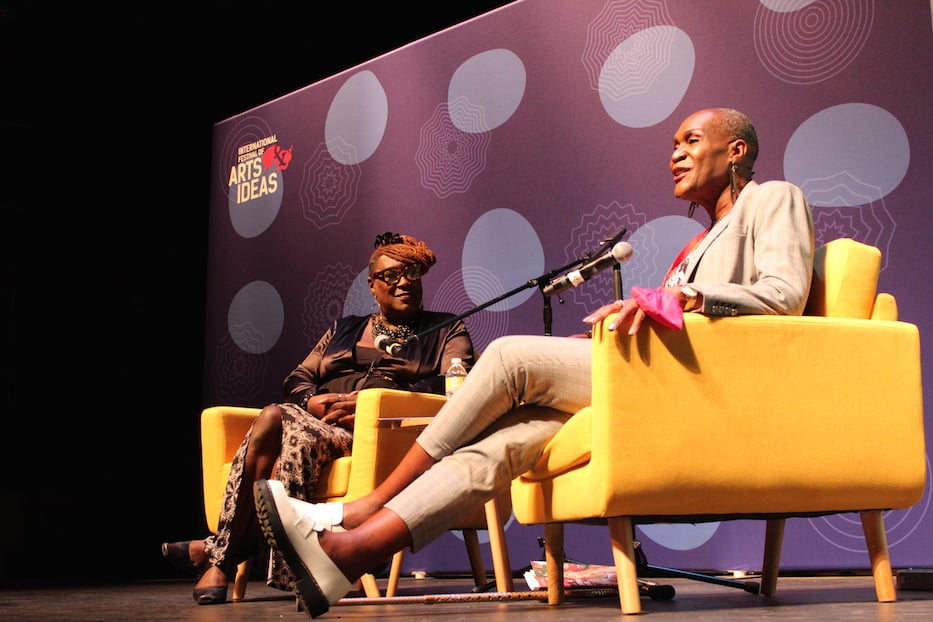 That public art-fueled revitalization continues today, now centered on public memory and healing. Community activists have turned the intersection into an autonomous zone where in the weeks and months following Floyd’s murder, artists have created a succession of murals and other forms of public art, including stickers, posters, and chalk drawings.

That conversation around community care continued during the Q&A, moderated by New Havener Nadine Ruff. Ruff is an HIV-positive activist, social worker, and founder of the trans support group Divinely You. She is known especially for her transformative work at A Place to Nourish Your Health, formerly AIDS Project New Haven.

The intimate but rapt audience had questions. One attendee, a trans young adult with a background researching trans economic justice, asked about policy solutions to the disproportionate unemployment of Black trans people. Jenkins pulled her gaze into the first row of the theater where the young adult sat.

“Exclusively developing programs that address that community is how we’re going to shift the paradigm,” she said. She added that she especially sees potential for the green jobs economy to support transgender and gender non-conforming people.

Another audience member brought her background as an educator and curriculum-creator to the event. Lauren Anderson, who has launched the nascent venture Possible Futures Bookstore, asked how politically active teachers can turn schools into “movement-building spaces,” as opposed to spaces of curricular repression.

Jenkins pivoted in her yellow armchair to meet Anderson’s gaze.

The key takeaway was that as curator of the Transgender Oral History Project at the University of Minnesota, Jenkins had the honor of interviewing trans people who, as a whole, represented 57 different gender identities. Kids are coming out young, and in growing numbers, she said.

“The future is nonbinary,” Jenkins declared.