Another Octave Winds Back The Clock 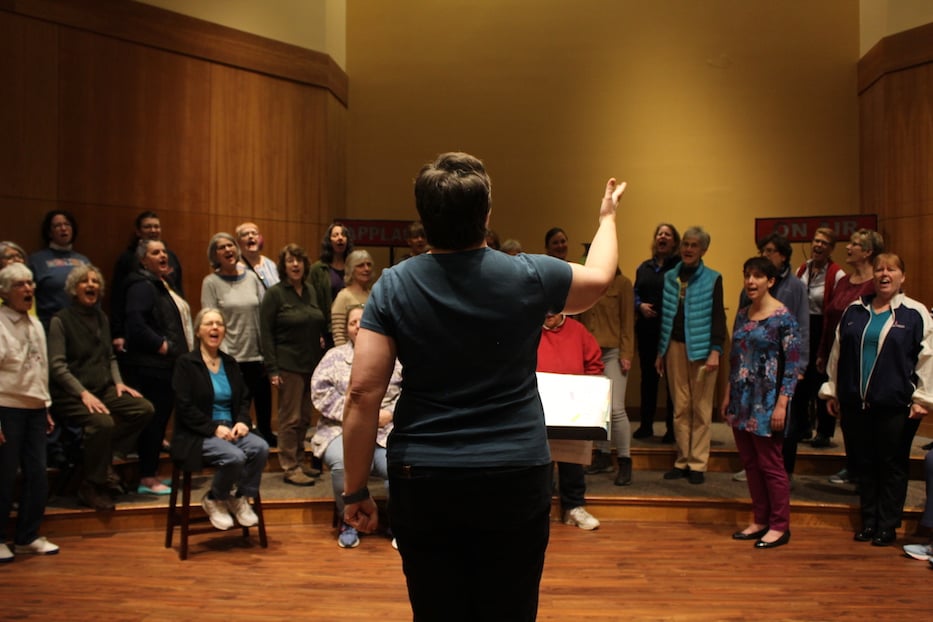 Westside Story’s 1961 song “Maria” filled the pews of Unitarian Society of New Haven. Each time the word pierced the air, another layer seemed to form on top of the one before. In between, even breath became dramatic. At the front, Melinda Walwer raised her arms, her hands gently guiding the group.

Walwer is the artistic director of Another Octave, Connecticut’s all-women chorus. Tuesday night, the group gathered at the Unitarian Society of New Haven (which is, ironically, in Hamden) to rehearse for this weekend’s dive into “Bandstand, Boogie & the Brill Building” at their spring concert. After performing last weekend in South Glastonbury, the group will perform at the Unitarian Society Saturday night. Tickets and more information are available here.

Choir members came up with the theme last year, while thinking about what repertoire they wanted to work on. They settled on bandstand as a nod to American Bandstand, a music performance and dance television program that first aired nationally in 1957, and then remained on the air in both live and taped iterations through 1989. In its time on the air, the program featured famous acts including Jerry Lee Lewis and Buddy Holly, and countless rock and roll icons.

“Anybody who was anybody went there,” said Gina Juliano, board chair for Another Octave. 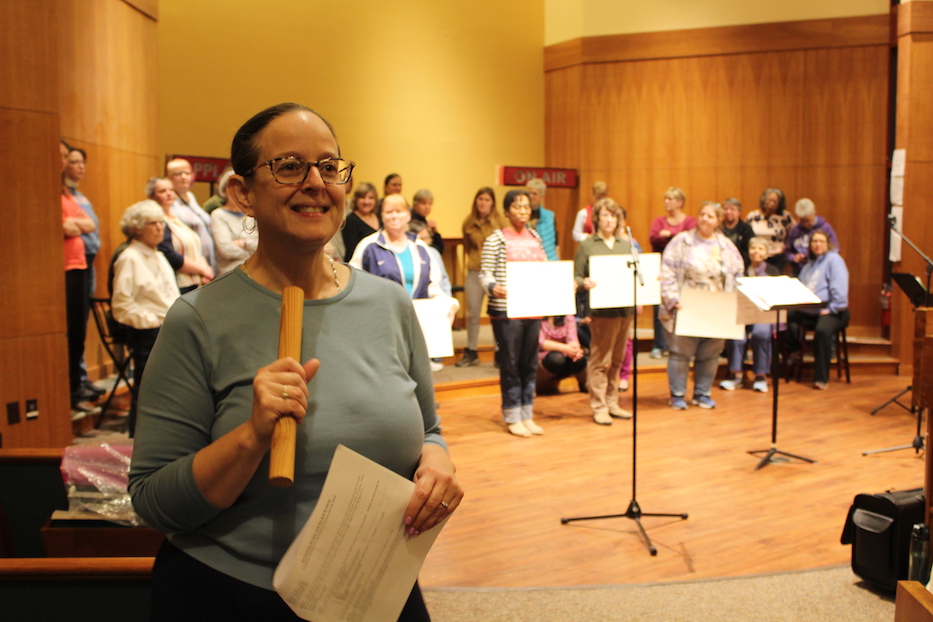 As a kid, Juliano watched episodes of the show. That will come in handy during the concert, as she transforms the choir’s performance into an adaptation of the series. In addition to joining the chorus on three songs, she will emcee as the group’s Dick Clark and Casey Kasem.

Tuesday, choir members ran through tracks including “Come Softly To Me” by The Fleetwoods, Lesley Gore’s “You Don’t Own Me,” The Bobbettes’ “Mr. Lee,” and “Breaking Up is Hard To Do” by Neil Sedaka. Some of the bits included choir members and artistic staff practicing a pre-show message as if the house was already packed. A few harmoniously told attendees—who were mostly imaginary—to follow show etiquette by turning off their phones and unwrapping their cough drops.

Throughout the rehearsal, members of the chorus practiced their television host voices, holding a mock microphone close to their face as they called on members in the empty pews. They filed into the Society’s round sanctuary in a game-show fashion, bursting into smiles before they had even started singing.

The concert is intended to be fun, and sometimes soaringly lighthearted—with an undertone that comes back to female empowerment. In the show’s “PlayJill,” there is a note about women songwriters during the Brill Building and Boogie hype, some of whom have since been erased. 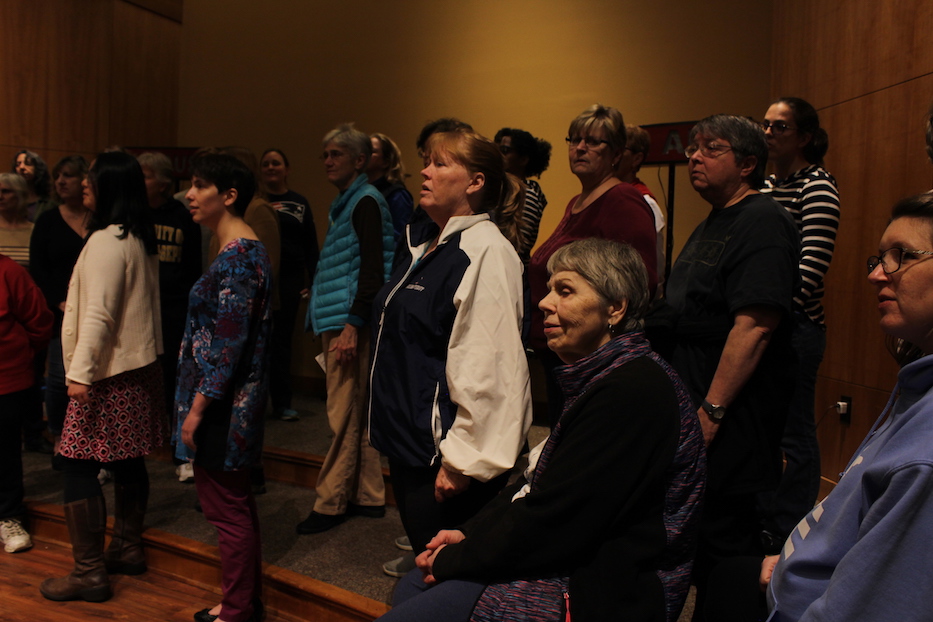 The Brill Building was a music building in New York City that was a hub for many famous rock-n-roll songwriters like Gerry Goffin and Carole King, according to Juliano. King made it to the shows setlist with her adaptation of “Will You Love Me Tomorrow,” which she covered after The Shirelles debuted the song in the 1960s.

While Another Octave does not go back to the 1960s, its beginnings are also in the second half of the twentieth century. Founded in 1989, the chorus was originally rooted in the lesbian community. The concert officially marks three decades of making music together.

“One day a bunch of lesbians got together and thought they’d like to do something else besides softball,” joked New Havener Rhea Hirshman, a writer and adjunct professor at the University of Connecticut who’s been a member of the chorus for nearly 30 years.

Hirshman said the group allows her to explore what she loves while providing an outlet outside of work. She has watched the chorus transform from its inception, when the intention of its eight members wasn’t to be a performing choir so much as a singing group. Soon, that group grew to 15 members, and then the nearly 60 that are still in the group today. 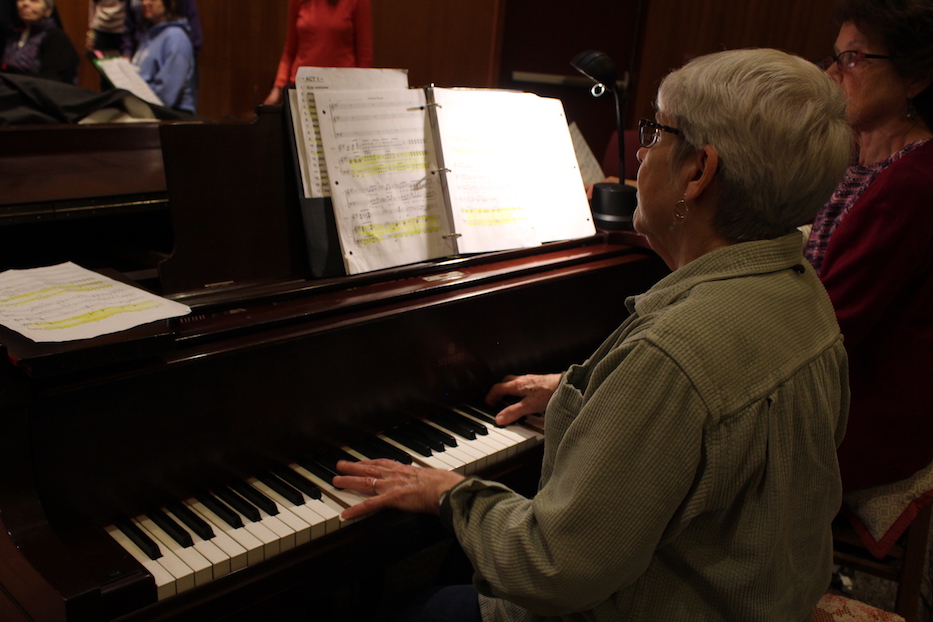 In its evolution, the chorus has performed at hundreds of events, including the national the Gay and Lesbian Association of Choruses festival. Increasingly, members have also seen younger attendees at their concerts. Associate Artistic Director Kris Montgomery attributed the change to pop-culture influences like Glee and Pentatonics.

Amy Weiss, who Hirshman described as the group’s first alto, said that the challenge and change keeps her coming back. Even after almost 30 years with the group, she feels pushed reading music from booklets, memorizing songs, and performing at shows large and small. She said the chorus keeps “raising the bar” and getting “better” with more diverse music.

“This is where I belong,” she said. “It’s beyond music. It’s sisterhood.”

Another Octave performs this Saturday, May 18, at the Unitarian Society of New Haven at 7 p.m. Tickets range from $18 to $30 and are available here.