A Poet Learns The Proper Way To Floss 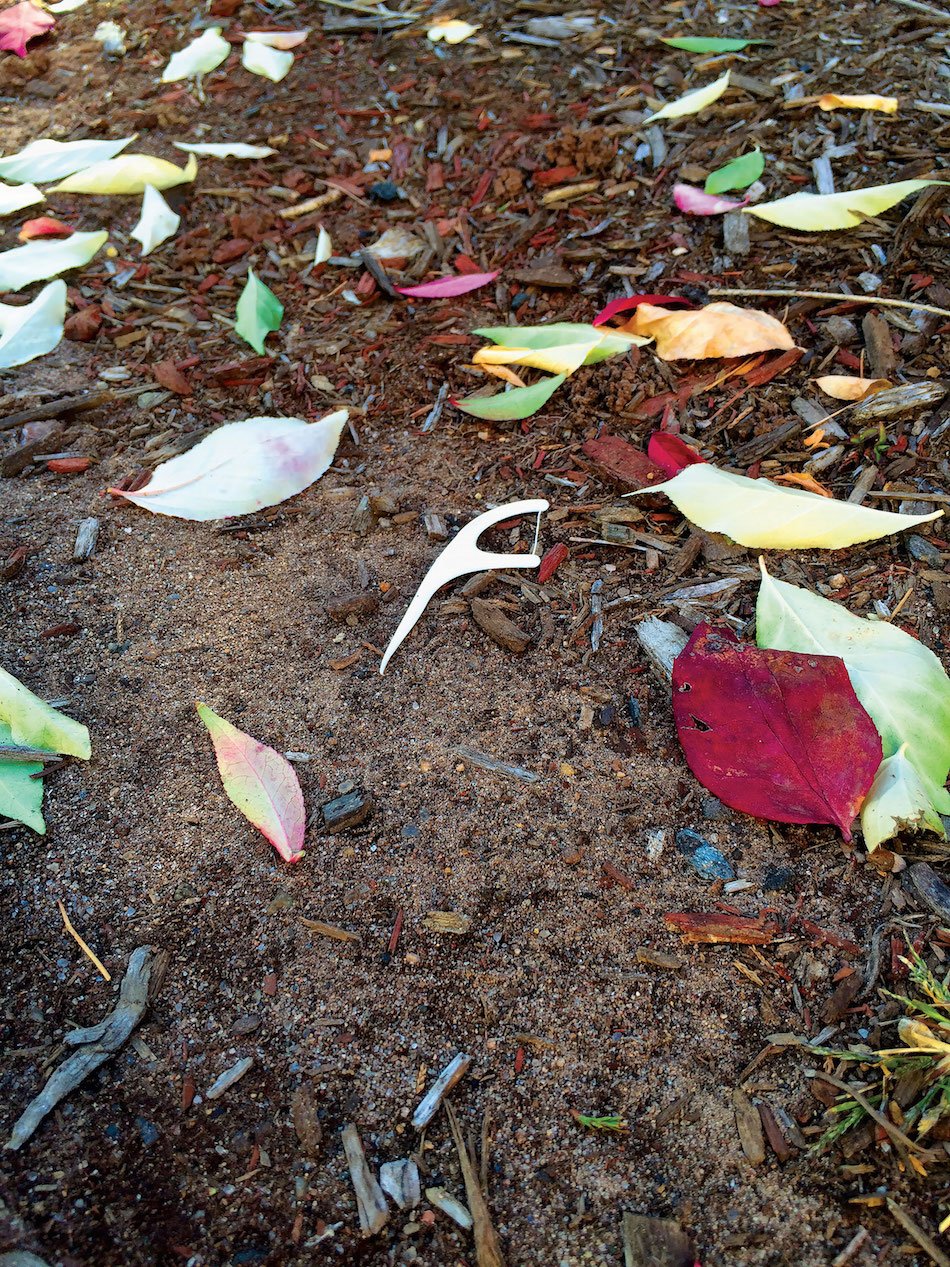 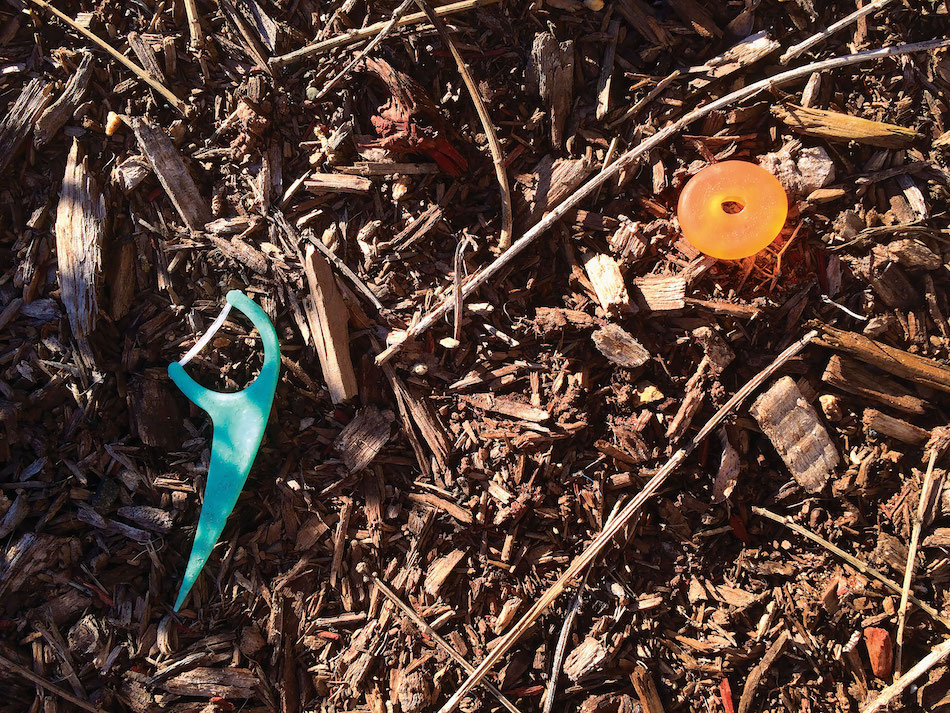 Jen Payne remembers the first one that she saw. And the one after that. And after that. Tiny, single-use dental flossers, discarded in parking lots, and beaches, and wooded hikes around her hometown of Branford. Each cast off in nature with no explanation, and no owner.

She started photographing them as a series, more flossers catching her eye every few days. At first, she didn’t know what the series would become: A friend joked that one flosser photo looked like a book idea; another met with her to talk about them in the context of an exhibition.

Now, the flossers — and four years of writing that they accompany — are fodder for Evidence of Flossing: What We Leave Behind, a book of poetry and photographs out this fall from Three Chairs Publishing. What began as a project distinctly about nature and the environment has transformed into something larger, what Payne pinpoints as a sort of environmental meditation on our place in the universe.

On Oct. 14, Payne will launch the book at Martha Link Walsh Gallery in Branford from 3-6 p.m. In preparation for that launch, The Arts Paper had a chance to catch up with Payne and chat about the book. Excerpts of that interview follow.

The first thing I noticed, before even getting to the poems, is that you thank artist and curator Debbie Hesse for helping you figure out the direction of the book. I like the idea of a curator getting a shout out in a book of poetry. Tell me more about that.

Well you know, I was part of an exhibition Where The Whole Universe Dwells over the summer, curated by Debbie Hesse. I had met with her in April or May, and she invited me to be part of that exhibit. It was her concept of the universe that helped me understand the flossers. It was just something I realized when I was getting ready for this show …There was a really nice synergy that happened.

That seems like a big, exciting leap. Tell me more.

There’s a quotation in the book — a John Muir quotation that talks about how everything is connected. Here it is: ”When we try to pick out anything by itself, we find it hitched to everything else in the universe."

When I was part of the exhibit with Debbie, I was trying to explain what the flossers are all about. I started out with my standard pitch and it was just about the effect [of non-biodegradable material] on the environment and nature. Debbie showed me that every this is connected — how we feel about the world around us, each other, is kind of shown in our disregard for the planet.

I was done with the book at that point, but the exhibition helped me … think about it in a new way. The original intro to the book talked about the environmental movement of the 1970s. Really, the book was focused around that. The title of Debbie’s show — it just twisted it. You need that connection with other creative people.

As you were working on the flosser photographs and the poems, did you envision presenting them together? Take me through some of that process.

The poems have been written in the last three to four years, not necessarily with this volume in mind. My first book, Look Up!  was published in 2014. And that was sort of a reconnection with nature … a journal of my experience of running a biz full time and finding a way to reconnect with being outside. So there was a connection that happened for me personally. After publishing that book, I was in nature and connected and starting to see the other side of it.

I started asking myself questions. Like: Why am I so busy? How is that affected by our technology? How is that disconnected with how we feel? The more understood my connection with the natural world, the less I felt connected to technology. And that’s where these poems came from. 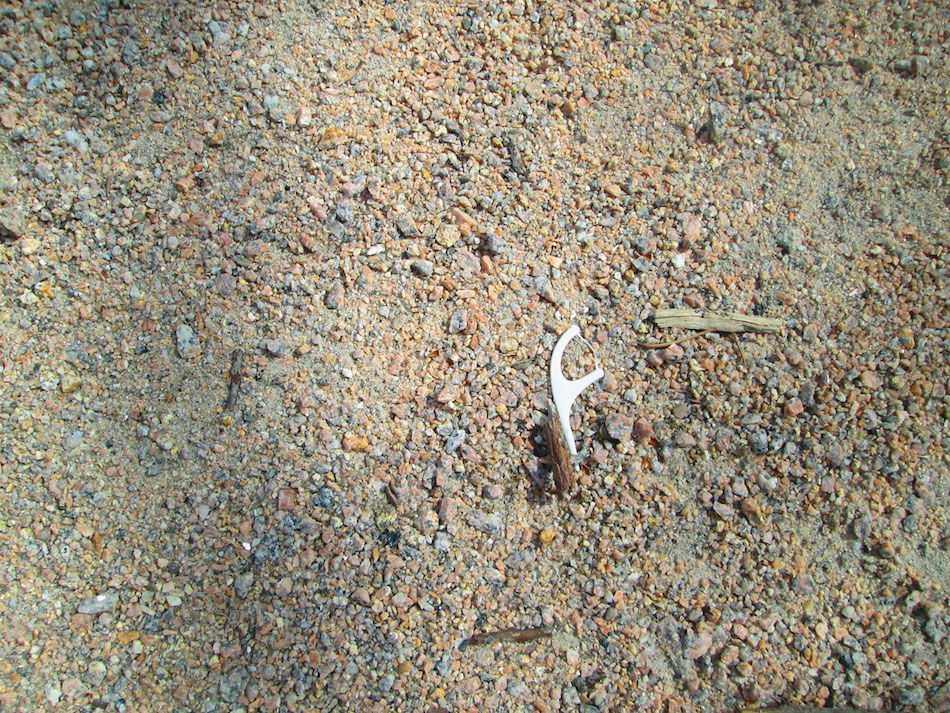 And when they come, how do they come? What has your process looked like in writing and editing this book, and what makes these poems, rather than prose pieces?

Well, I’m a member of the Guilford Poets Guild. They’ve probably seen 80 to 90 percent of the poems that are in the book. And then I do A a blog called “Random Acts of Writing,” and all of the poems have been on that over the past eight to nine years. Several of the people that I’ve met through my blog I’m friends with now in real life.

I’m a very freeform poet, which you can see in the book. For me, a poem is about rhythm and pauses. The writing that’s more prose poem-like in the book, those are stories.

I talk about poems showing up. That’s what they do. Rarely do I sit down and try to write a poem. There’s a poem in the book called Evidence of Flossing. It’s a two-page poem. I realized as i was putting the final book together that I didn’t have a poem about flossing. The book was called Evidence of Flossing and there was no flossing poem! So I went to the woods, I took a deep breath, and I asked the universe for a poem.

I took a walk, and I got the poem that starts with “Would God floss?” The poem came to me in little bits and pieces on the walk.

I don’t like to sit with things for long. If I sit with them for too long, they get overworked. Since I write for the blog, usually I like to have content for that. Sometimes it’s good, it’s done, and I’ll put it up on the blog. By the time I bring it to the poet’s group, I’m done with it.

Sometimes maybe it’s not done, and then maybe I’ll go back and rework it. But there are enough gremlins in my life. I don’t need them in my writing! 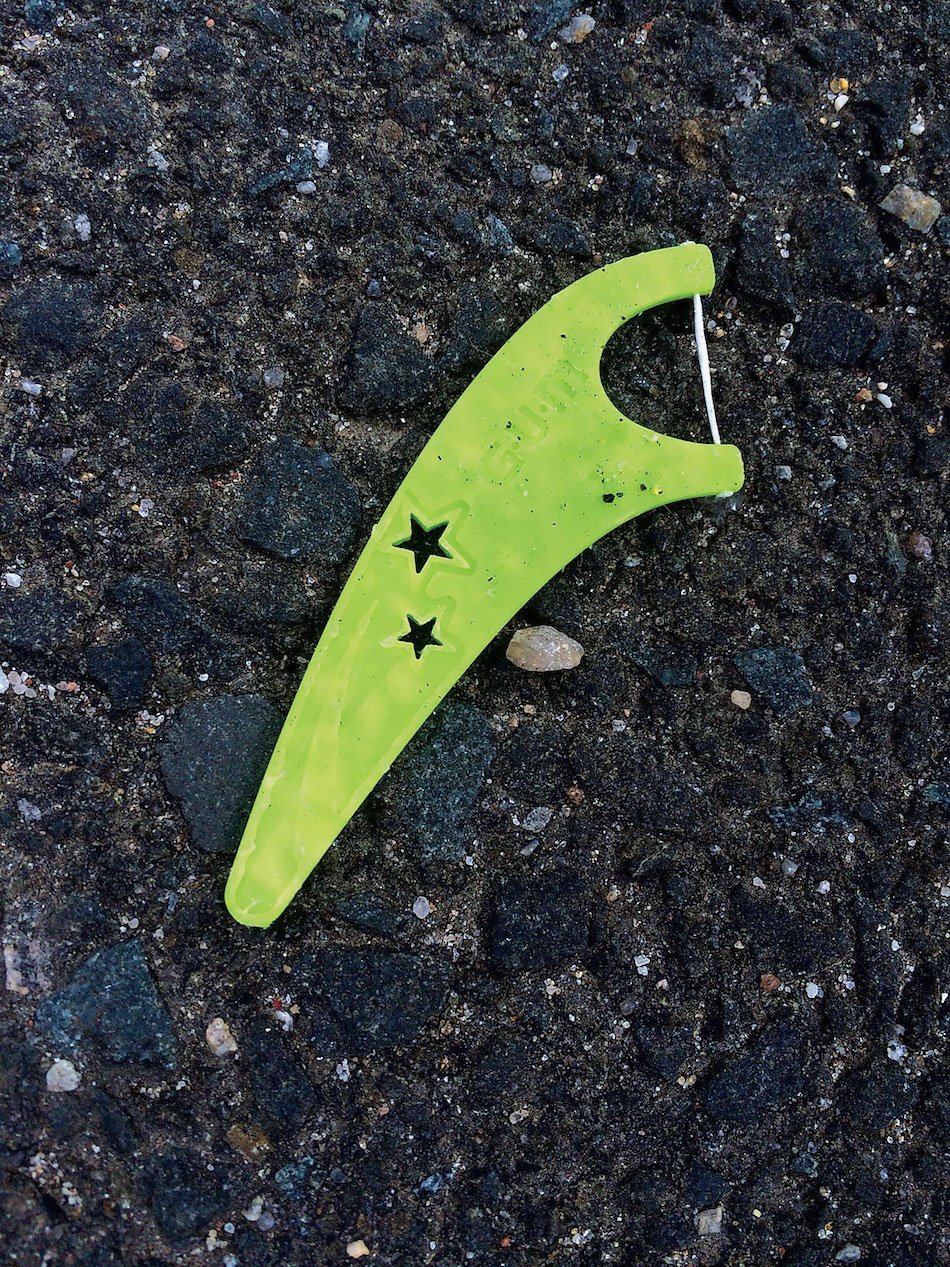 These poems are about nature and the environment, but they are also filled with a wonderful sense of whimsy. I’m thinking for instance about “A Lament for the Parcel at 250 North Main Street,” which starts with “There will be no monument for you/No quarried pink granite statue,/no sleek wall with carved names,/or plaque at which we leave flowers.”Where does that come from, at a time when I think you’re also aware of how imperiled the planet is?

I think that the whimsy comes from being out in nature and seeing how it all just flows. It doesn’t take itself too seriously … it kind of bends and weaves with what it comes up against. You can go out for a hike and you’re having the worst possible day, and then you go out go nature and feel completely better.

I remember being out in the woods one time around Christmas. I was in a really bad mood. And I remember thinking “Geez, the trees don’t seem to notice that it’s Christmas!” It was just another day in the woods for them.

Okay, so I want to talk about the flossers. How did that get worked in?

The first flosser photo was a fluke. I just saw it on the trail. I took a picture and I posted it on Facebook, and one of my friends said: “Is this the new book?” Then I started to identify them — Evidence of Flossing, Dentist’s Office Parking Lot, and so on.

Are any of them posed?

Not one of them. They are all exactly as they happened.

Did you find yourself keeping an eye out for them?

They just … you just see them. It’s actually a phenomenon. I looked it up. Because there’s actually a process that our brains go through when we start to pay attention to something in particular. It’s called “frequency illusion.”

Where does this book fall in your career? What is it accomplishing for you?

Now I see the world differently. More poetically, more artistically, more creatively. When I started, I was more scientific about it … I sort of came in from that angle. I’m now more a part of it, experiencing it on a different level.

I think with this book of poetry I feel a lot braver about my writing. Some of the poems in this book, they’re not ‘let’s all play nice.’ It’s time to speak up for for the environment.

Did that take you some time?

How old are you?

Okay, so not old.

What’s your hope for your readers? Obviously there’s an environmental bent.

Oh goodness! Well, I am toying of doing an exhibit of the photos. I like the idea of doing the photos really large. And I’m already thinking about my next book of poems. I think they’ll be a sort of collection of memoir and memory poems.

You spend so much time in nature and it’s so important to you … can readers expect some thematic overlap in these new works?

Yeah, I think so. There’s a connection that happens. Even in this book, there are memories good and bad, connections with people. Certainly, memories show up when you’re out in the world. You see things that remind you of old stories or people that you know.