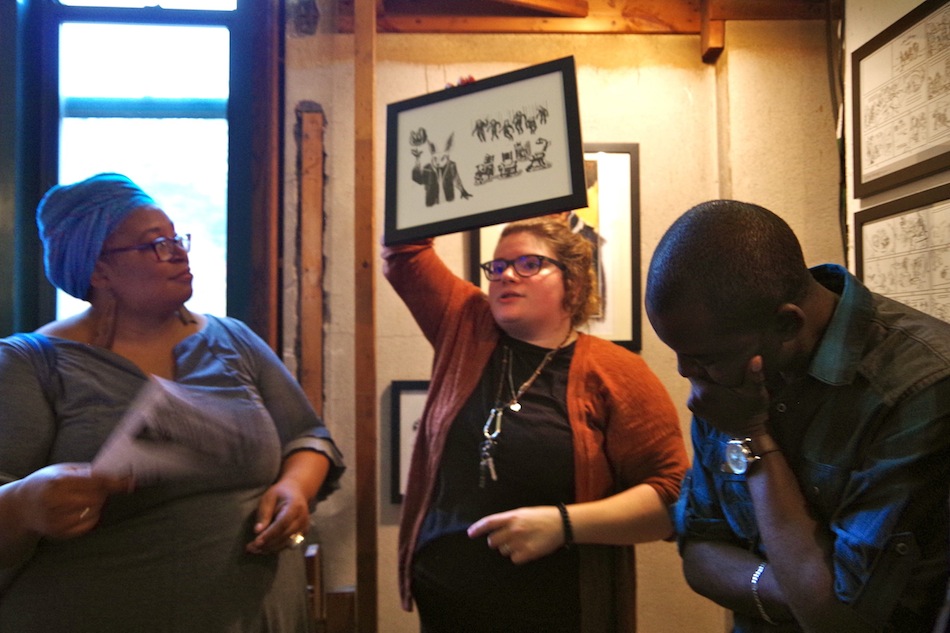 Salwa Abdussabur steadied themselves in a dusty, sun-soaked corner of the Goffe Street Armory, a low hum of chatter blooming in the room. They pulled out a black binder flush with poems. Around them, bright paintings by Jackie Ryan winked out from the walls. They needed to speak their mind about something they’d been seeing.

“I want to be pretty like that. Like/skinny not fat/Like, cute girl on Instagram, light skinned, big butt, greasy curls and all that,” they read, an outstretched hand piercing the air of each downbeat. “Make niggas want to turn their backs on a dark-skinned cat who just wants to love her fat. Hold the mirror to her face I swear it might crack.”

A few audience members who had found the room’s couch leaned forward on their knees and palms. Others, wandering into the room, froze in place at the words, then came in closer to listen. 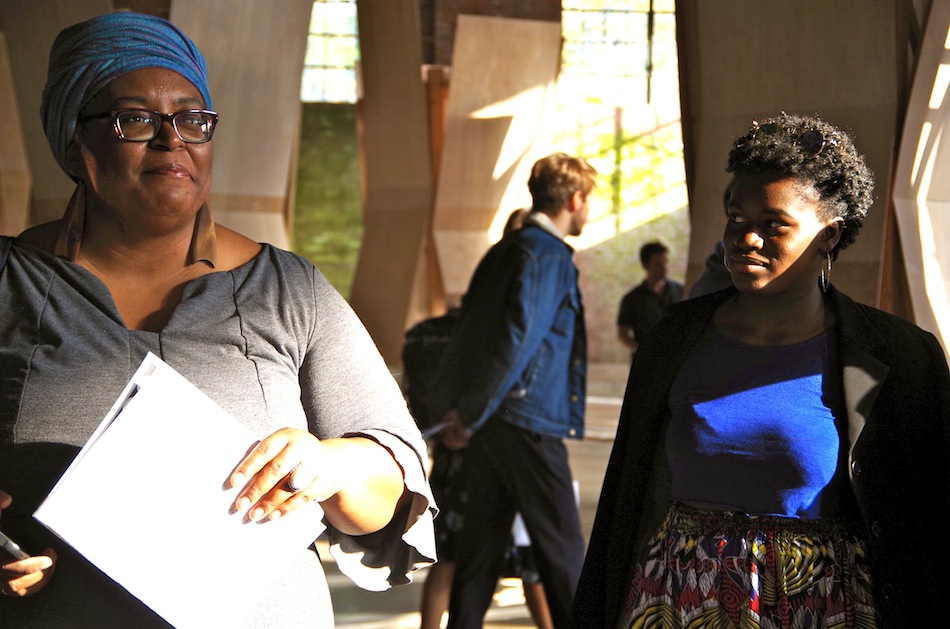 Poet Taylor Rozetta, a sophomore at Achievement First Amsted Academy, was unable to make the event due to illness.

“This is a liberated space,”  said Washington at the beginning of the event, bringing attendees into a huddle in the drill hall. She encouraged members to reach out to someone they didn’t know, shake hands, and exchange names. “And this is a journey! A journey that we’re taking together.” 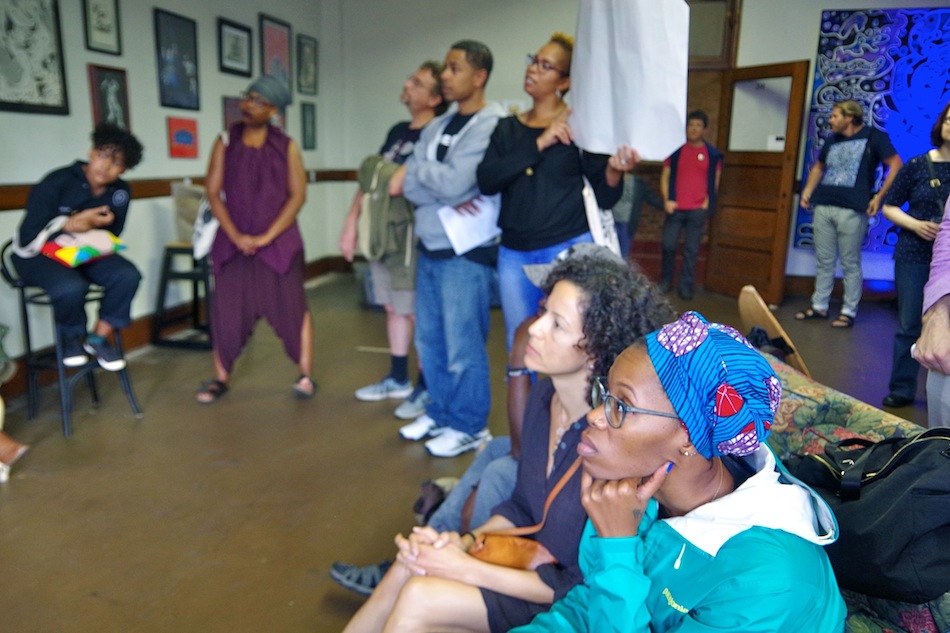 Like last year, Washington placed each spoken word artist with visual art and multimedia installation, traveling from the Armory’s central drill hall up the stairs to the second floor, then the third, and then back down to the building’s front lawn. Her hope, she said, was to give attendees, poets and visual artists alike all a new way of seeing their own — and each other’s — life and work.

Performing against Ryan’s bright, figurative paintings, Abdussabur conjured images of fresh starts and turning pages, verses like “Listen to me clear and remove the fear of what’s real.” They dovetailed with Ryan’s work, all done when she returned from the Burning Man festival earlier this year, and decided she “needed something new.” 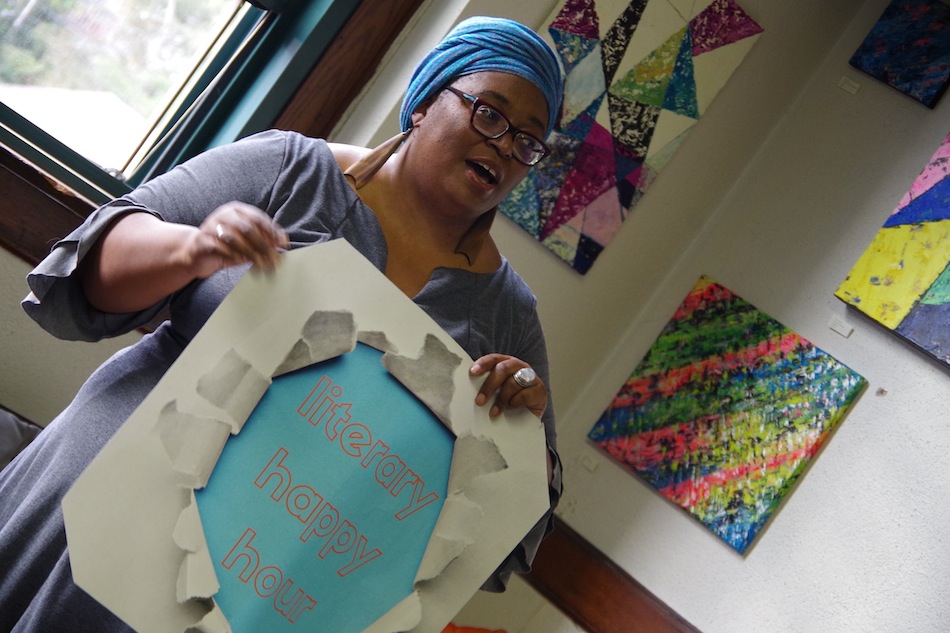 But Abdussabur’s poems also moved attendees beyond the confines of the room, challenging them to think about black homeownership and neighborhood turnover — ever present as Yale University encroaches on Dixwell, Dwight, and the Whalley-Edgewood-Beaver Hills (WEB) neighborhoods — with a poem that began “I heard of a time when we owned our own shit.”

Theirs were not the only poems to spread, like willing and inviting fingertips, far beyond the bounds of the Armory. Performing alongside graphic artist Sara Zunda, Kisaku recited selections from his forthcoming Requiem for an Electric Chair, a play that tells the harrowing story of his imprisonment and near-execution at the hands of the Congolese government.

Kisaku arrived in New Haven as a refugee three years ago; he is writing and translating that story from his naive French to perform in full next year. Zunda will be live illustrating the whole performance. She has already started, in a performance at CWOS’ “Westville Weekend” earlier this month.

“When I leave this place, I will go see my children,” Kasaku read, his right hand trembling as he gripped the paper. Attendees pushed in closer to hear him, filling that corner with the smells of sweat, fresh soap and aftershave. “We are in here like dirty rats and mangy dogs … what I know is that I am not alone.”

At CWOS' "Westville Weekend" on Oct. 6 and 7, Toto Kisaku and Hanifa Washington presented excerpts from "Requiem for an Electric Chair." Zunda (at center) was there to illustrate them in real time.

Zunda cocked her head forward, eyelids fluttering open and shut as Kisaku read. Behind her, illustrations from her series Little Vikings peeked out. Their eyes seemed to follow Kisaku as he read, his own face darting between the paper and the audience every few sentences.

Back outside the Armory, Bobroff ushered the group into the home stretch, launching into a piece that merged his Navajo roots and love for old school hip-hop. As he performed the piece, a mural comprised entirely of pool noodles shifted in and out of focus in the background.

The project was conceived by by mathematicians Dan Gries and Dan Bernier and students at Common Ground High School. While an older version on the Armory’s side wall (perpendicular to Goffe) is now disintegrating and needs to be taken down, a new ones with three botanical shapes faces out toward Goffe Street, across from De Gale field.

“I’ve been ghost dancing, and I can see Narbona, Crazy House, ODB, Notorious BIG and Red Cloud jump from the page over graves,” Bobroff read. “I hear tribal wisdom. I hear words. I hear prayer. I hear hands.” 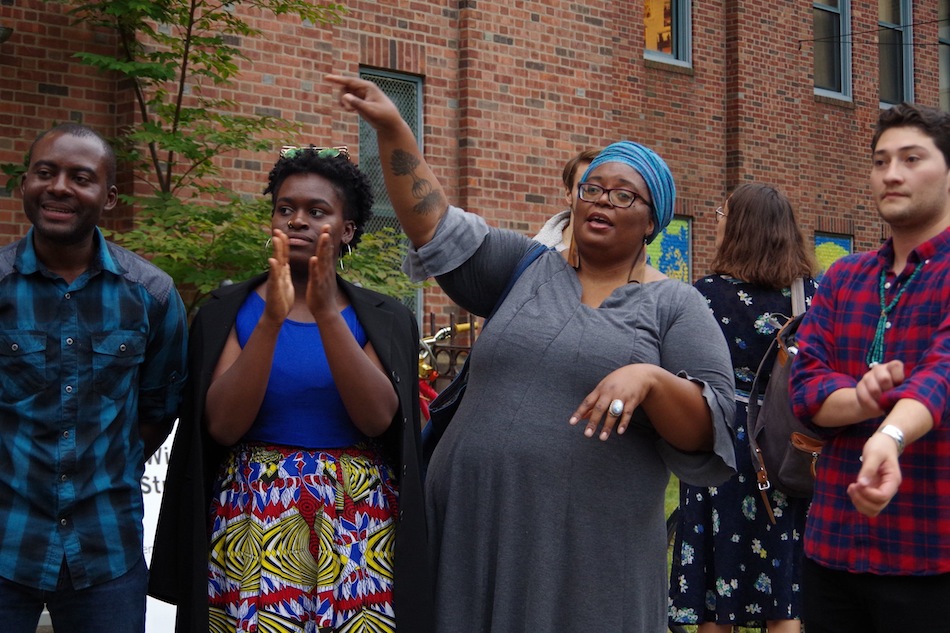 Washington ended the session with a story. Something strange has been happening to her recently, she said. It started a couple of months ago, as she noticed swimming lines and bright pins of light in her left eye — an eye in which she has been growing blind for years. They began after a series of eye injections to shrink the vein that was impairing her vision.

She went to her optometrist concerned that something was terribly wrong. Instead, the doctor delivered some unexpected news: That eye has been training itself to see again, and challenging her to look at things a little differently.

“I tell you this story about perspective as we’re in a world of craziness to ask a question,” she said. “What’s speaking to you? What’s already coming back to life?”