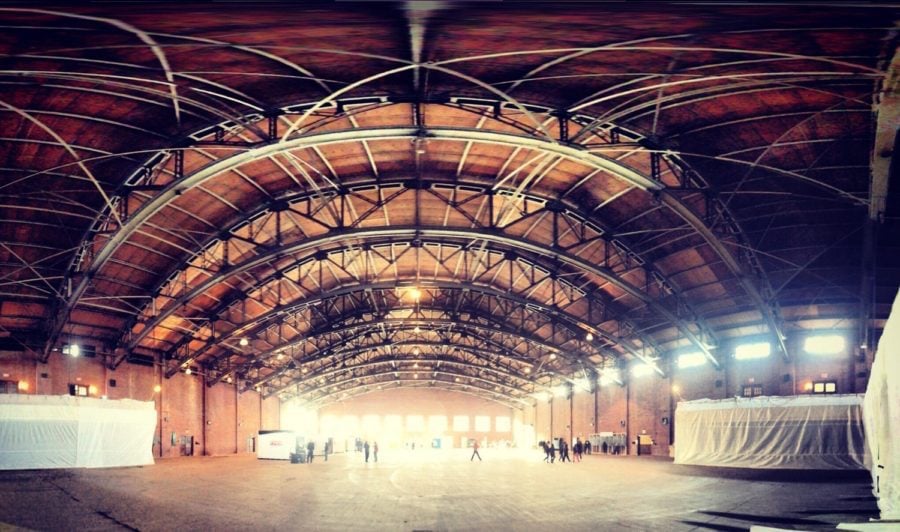 In her 25 years living close to the Goffe Street Armory, Alexandra Taylor Mendez had never been inside. Until last weekend, when she headed there with her husband and young daughter for City-Wide Open Studios (CWOS), and fell in love with the building’s potential as an arts incubator.

Tuesday night, Mendez brought that feedback to a monthly meeting of the Whalley-Edgewood-Beaver Hills (WEB) Community Management Team, where Artspace Director Helen Kauder had come to gauge community responses to “Armory Weekend.” It’s part of new effort from Artspace to involve the neighborhoods where CWOS takes place, instead of setting up for a weekend, disturbing the community, packing up and leaving. And after months of planning, it appears to be working. 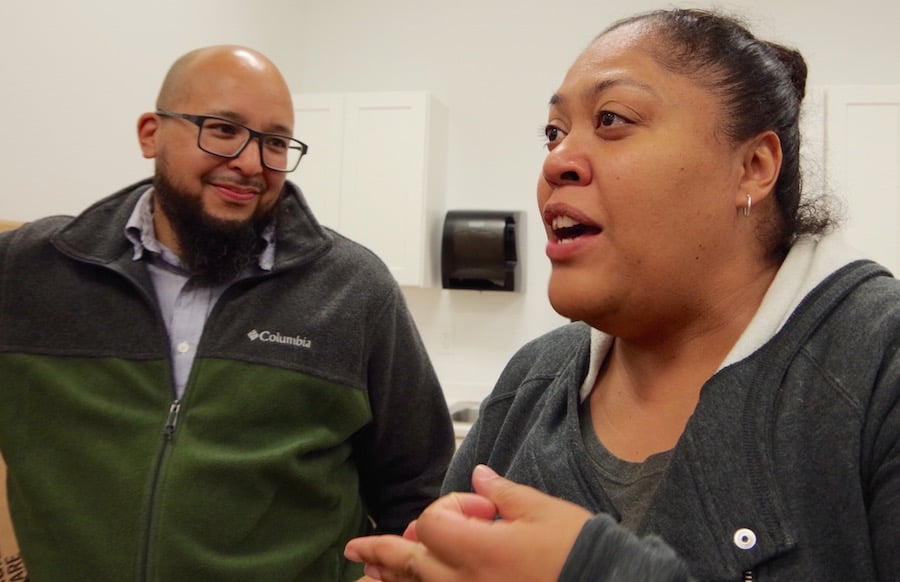 Mendez: A center for the arts? Her husband Chris Peralta is in the background.

For four years now, Artspace has used the Armory for one weekend of CWOS, a month-long citywide arts festival that comprises downtown, Westville, WEB, Fair Haven, and private studios in New Haven and West Haven. Each year, the Armory chapter of CWOS has grown, with performances, commissions, and a rising number of artists exhibiting in the space.

But the organization hit a sort of speed bump last year, when it exhibited Gordon Skinner’s painting and collage “Cops” as one of its commissioned works, mounting it outside the Armory without consulting city employees. After a cop complained, the piece came down and was moved back to Artspace’s 50 Orange St. gallery, prompting a number of public discussions around the decision.

At the time, city feedback suggested that Artspace hadn’t taken the requisite steps to alert the neighborhood, or the New Haven cops that patrol it by foot, bike and car each day. Nor had the organization talked to the New Haven Correctional Center (NHCC), which the piece faced from Hudson Street.

This year, Kauder said Artspace made an effort to ensure that wasn’t the case. There were more commissions that relied on community participation, like Maria Gaspar’s audio-based Sounds For Liberation with the NHCC, and Elihu Rubin’s course Excavating the Armory with New Haven Academy students working alongside Yale School of Architecture students. Kauder, curator Sarah Fritchey, and youth engagement coordinator Marium Majid spoke to the WEB Management Team, and liaised with chair Nadine Horton, who supervises the New Haven Land Trust's community garden at that site.

For the first time, Artspace also waved a $60 exhibitors fee for neighborhood residents, and helped neighbors rent out their driveways on the days of the event. In the past, parking has been a problem for the neighborhood. 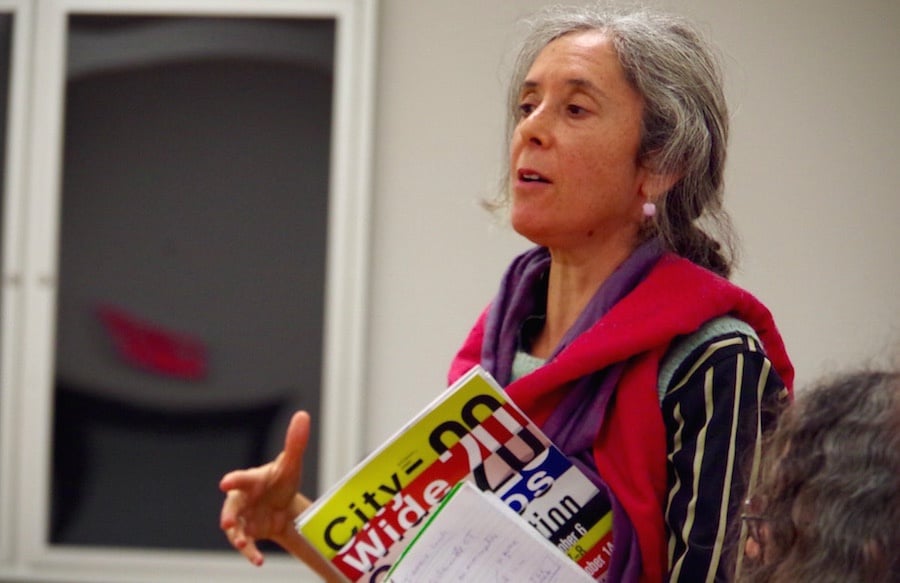 Kauder: Here while it's still fresh in your minds.

The result, Kauder said Tuesday, was an overall attendance of “about 2,000 people,” more diverse than it has been in years past. She said she’s already thinking about next year, and how to make the festival more accessible to New Haveners.

“Really, I’m here while it’s fresh on your mind to seek any input,” she said.

“It was an amazing experience,” said Mendez. “To walk by that building for 25 years, and Saturday was my first time going in.” She recalled that her daughter Olivia lit up when she entered the space. So did Mendez: It was one of the first times she could walk to a major arts event from her house.

“I want this for the arts,” she added after the meeting. She said that she doesn’t like having to get in her car and drive — sometimes within New Haven, sometimes beyond the city’s limits — for art activities that she, Olivia, and her husband Chris Peralta can experience.

WEB CMT Chair Nadine Horton and Lt. Elisa Tuozzoli  at the meeting. It was the first year Horton's daughter exhibited.

That’s not out of the cards — an arts and cultural hub has been discussed in the years since the state abandoned the Armory and turned it over to the city. The problem is money: Both City Engineer Giovanni Zinn and Economic Development Administrator Matthew Nemerson have said that a rehab will take tens of thousands of dollars, money the city does not have right now.

But the idea found supporters in the room. Several of the attendees, mostly WEB residents, said they’d like a place to create and consume art in the place where they live.

“It was amazing,” said WEB Alder Jill Marks, who serves Ward 28 and said she does arts and crafts in what little free time she can find. “I thought: ‘Wow, I can see myself here for real.”

Horton, whose daughter exhibited for the first time this year, lauded Artspace’s decision to drop the fee for neighborhood residents. It had made the difference between exhibiting and not exhibiting for her, Horton said. She recalled attending CWOS in previous years and thinking “She should be here” of her daughter. Now, she was. She added after the meeting that “We were proud parents.”

Another of the meeting’s attendees mentioned that she’d seen Excavating The Armory in action, as Yale School of Architecture (YSOA) students presented alongside high schoolers from New Haven Academy. She said she’d liked the project, but was concerned that it wouldn’t have an afterlife in the neighborhood.

“I really think they should come to Community Management Team,” she said.

Elihu Rubin was already a step ahead, Horton said. After presenting at the Armory, he and the group will be presenting at the next meeting on Nov. 21 — and he’s coming with an open mind and ear toward the community.