Escapade Rises From The Ashes 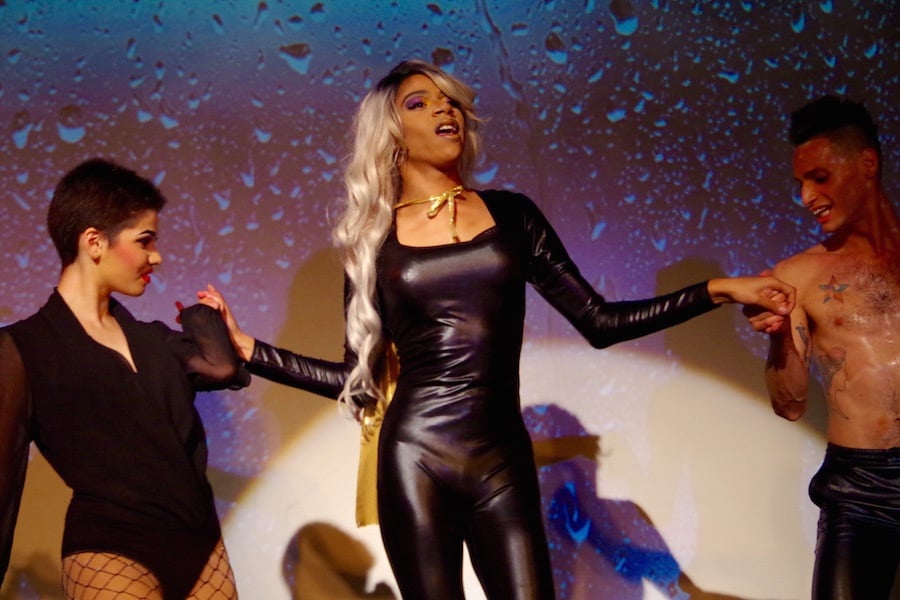 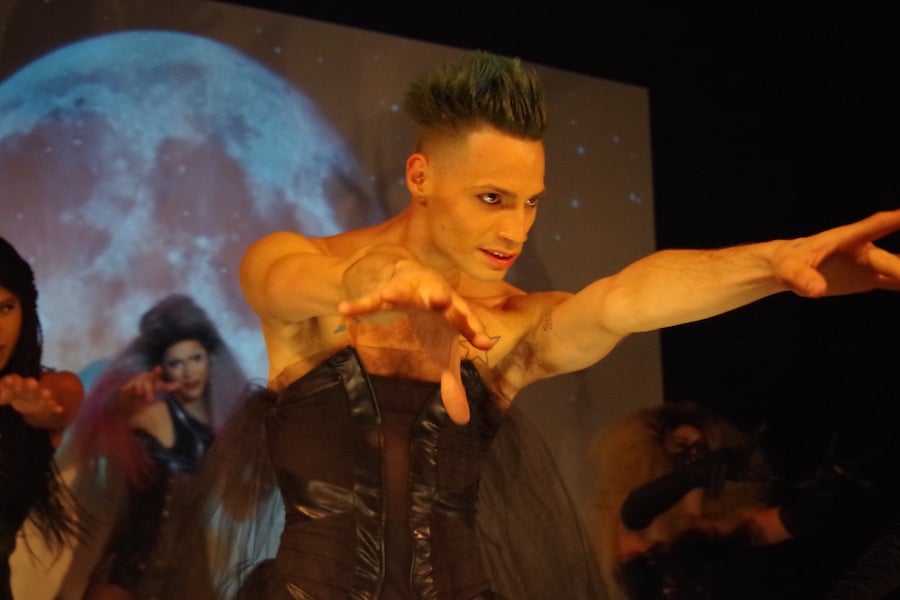 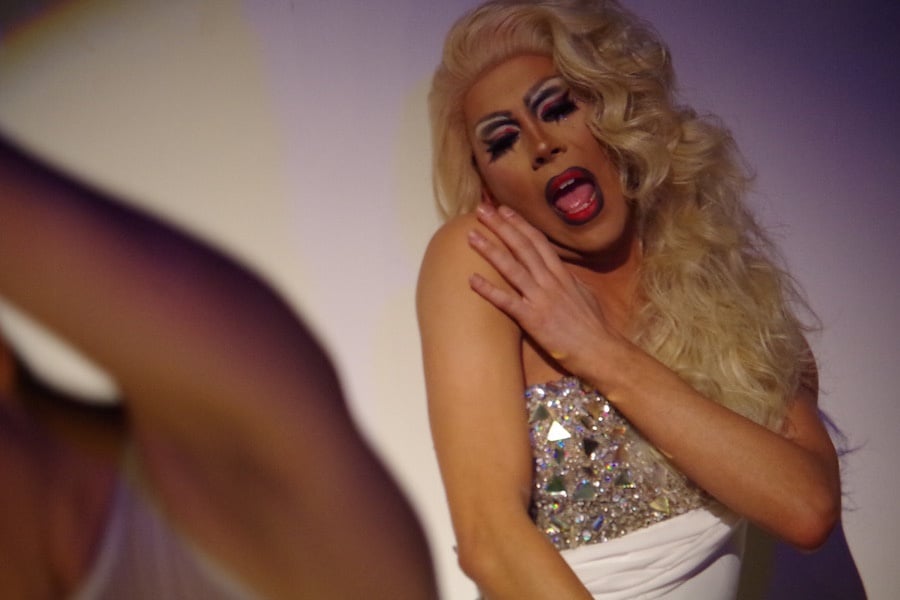 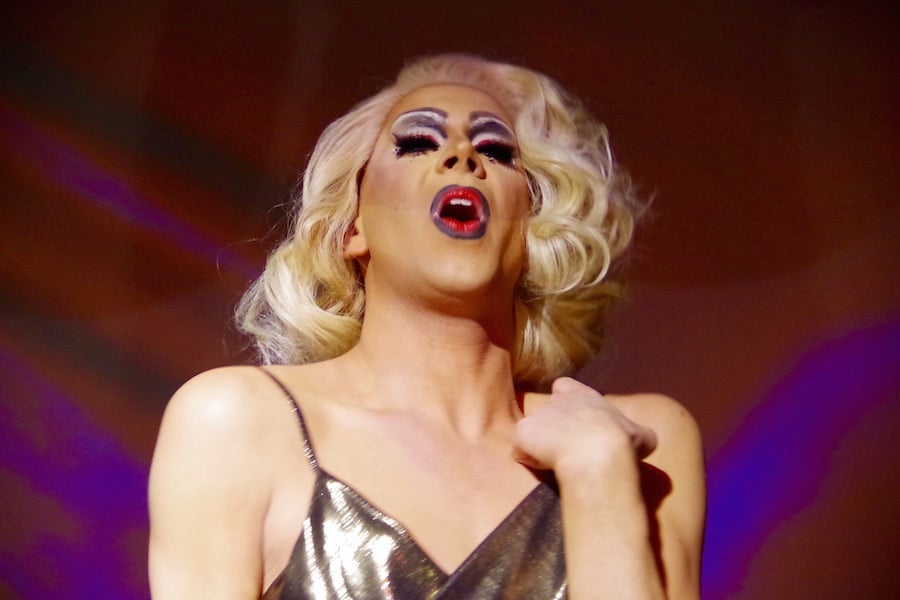 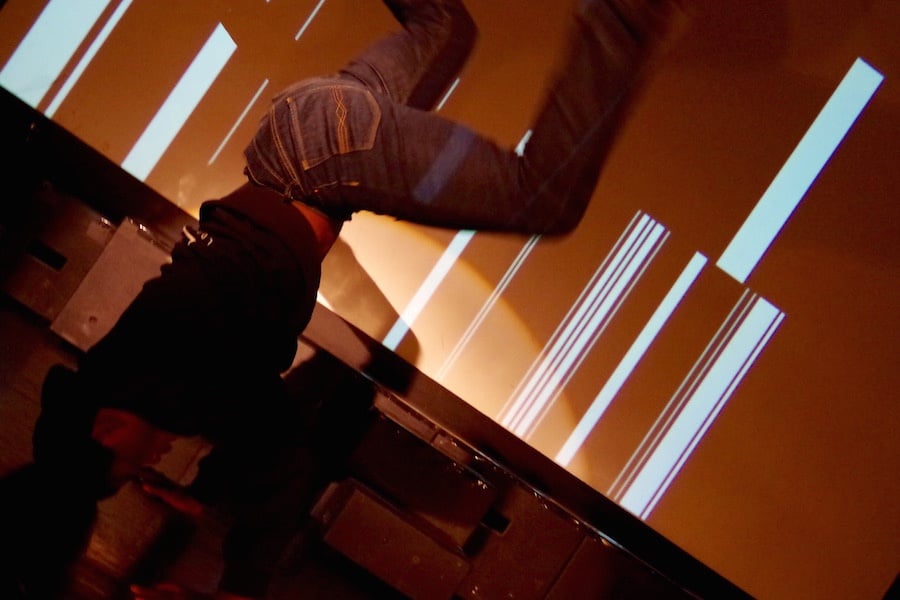 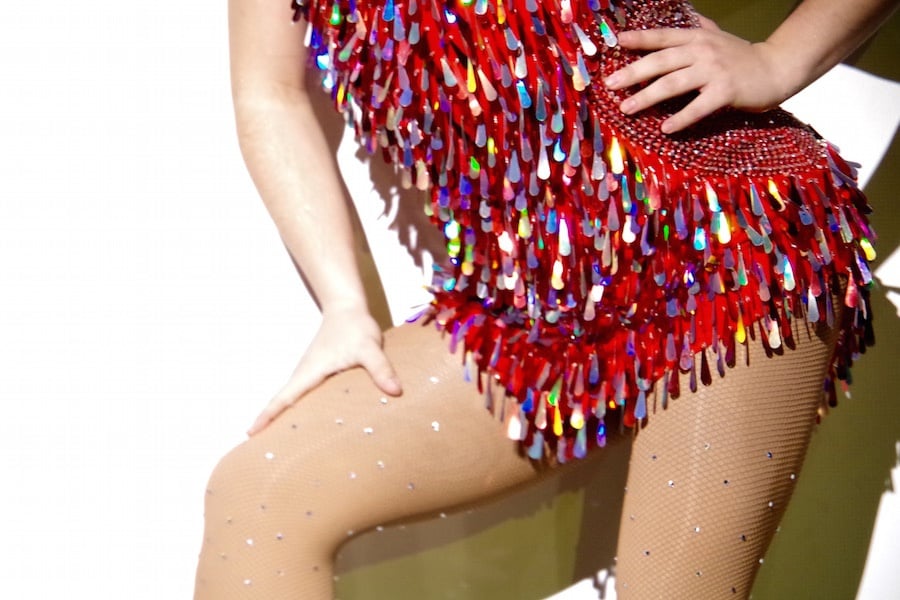 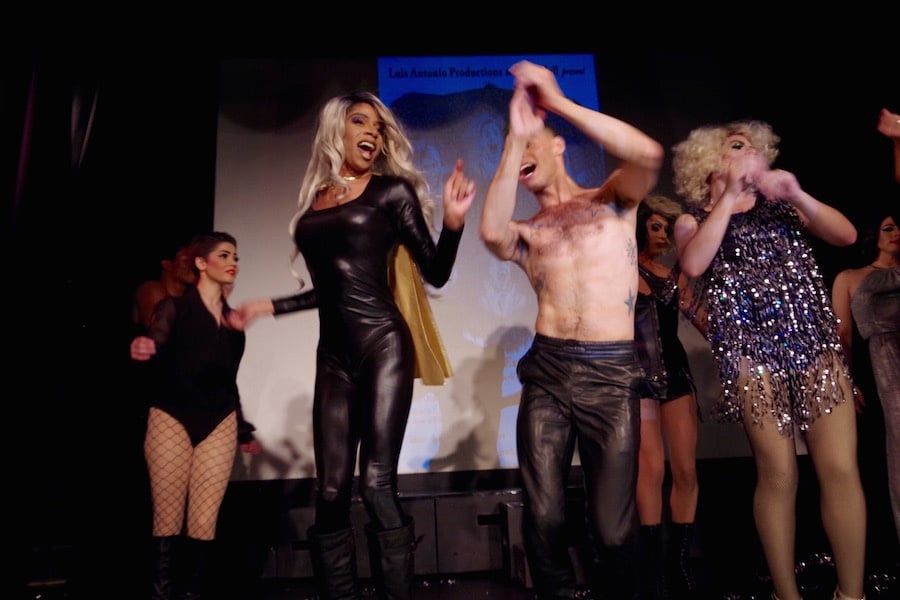 Laid out in a red leather jacket and black pants, James Pierre-Charles was still and stiff as a board. Only his chest moved, with a flutter of breath every few moments. Around him, the stage was silent as a tomb, lights fading to black over the audience as orange smoke billowed out from somewhere near the front of house. Over the lousdpeaker, a door creaked open, and footsteps shuffled into an empty room.

The shrieking overture to Michael Jackson’s “Thriller” coasted over the audience. Slowly, as if they were rising from the dead, seven gauze, sequin, and leotard-clad performers began to roam the aisles, stopping every so often as they smelled the warmth of human flesh. Mounting the stage with heavy steps, they began to dance in zombie-like unison.

So began Escapade: Experience The Madness Thursday night at Lyric Hall, where a final dress rehearsal was underway. Curated and produced by dancer Luis Antonio with a robust cast and small crew, the show runs this Friday and Saturday night at 7:30 and 10 p.m. Ticket information is available on Lyric Hall’s website. 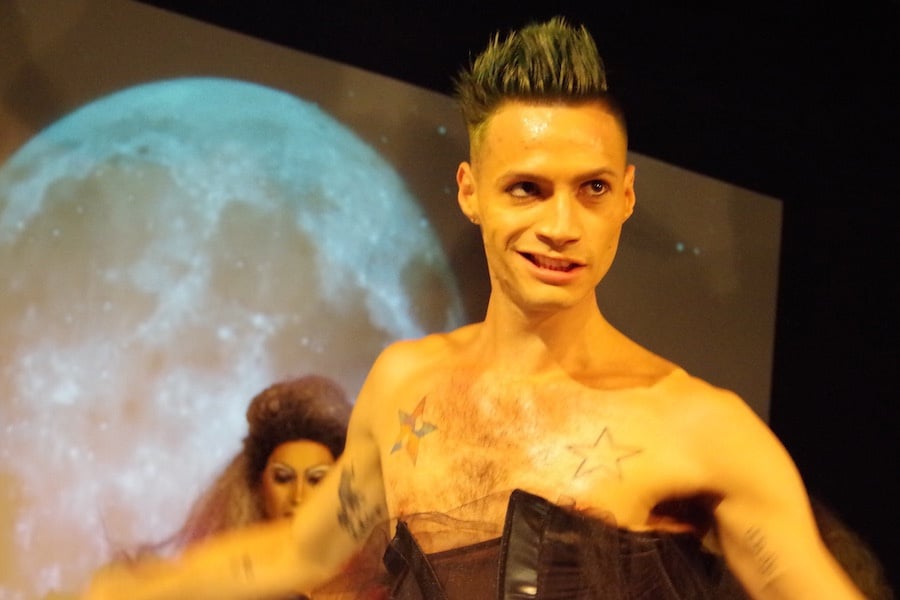 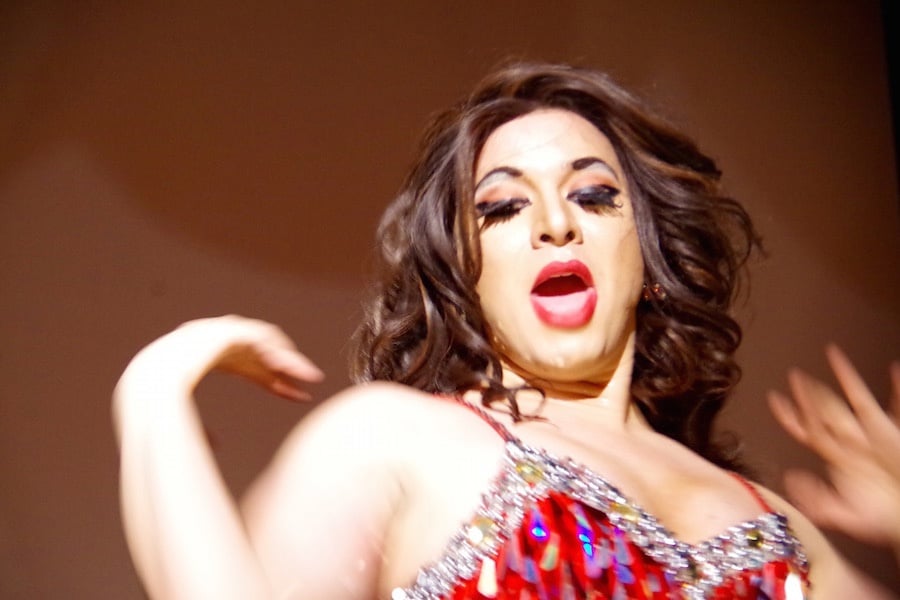 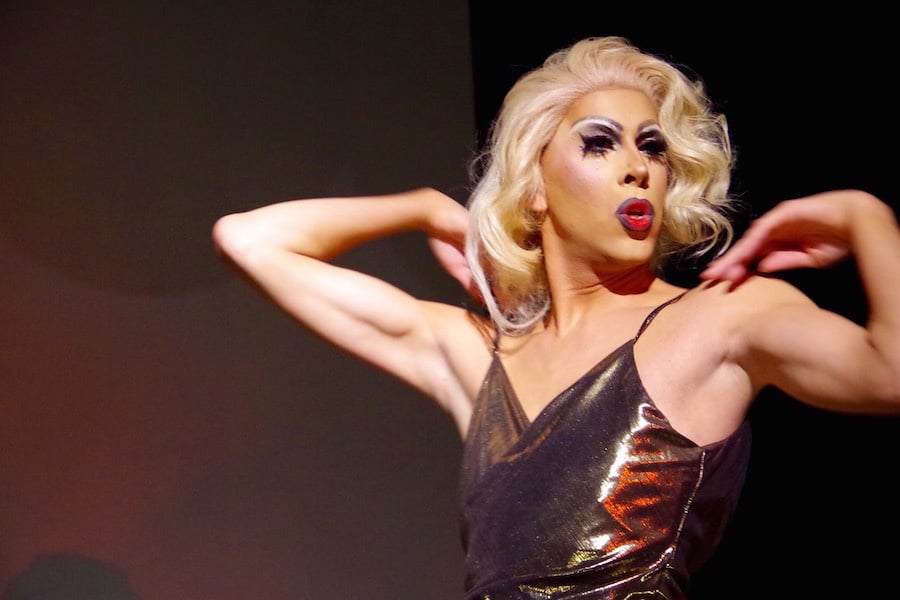 In 2015, Escapade started as an experiment in movement-based storytelling, unfolding as one big drag-show-meets-dance-party over 90 minutes. Performing to seething, propulsive tracks like Pink’s 2008 “Fun House,” performers worked through the story of a young man coming out to his father, running away from home, and joining the circus. With nods to Ella Fitzgerald, Nina Simone, and Peggy Lee, the performance tiptoed between past and present, mixing top hats and suspenders with big red clown noses, lyrical dance and glitter-clad queens awash in eyeshadow and lipstick.

That was then, Antonio said Thursday night. This is now. In its third year at Lyric Hall, Escapade has been completely revamped, with a new ensemble and musical numbers from Frank Sinatra to Celia Cruz to Christina Aguilera. Over two acts, performers probe the ghastly and ghoulish and quirky, bookending the show with powerful pieces on queer artistry and human rights. Antonio said it has remained a sort of tribute to the late Sassie Saltimboca, the beloved Connecticut drag queen who succumbed to cancer in August 2015. 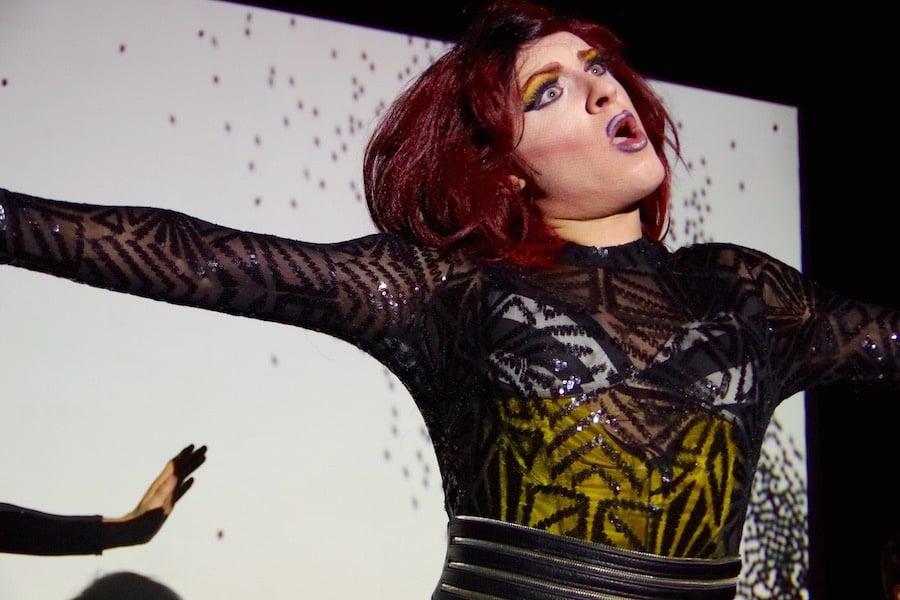 Partly inspired by the show’s proximity to Halloween, Antonio said he wanted to let the audience in on a secret: There are monsters and ghosts within each of us, waiting to claw their way out. He began to wonder what would happen if they did.

But that was just his starting point—he wanted to pull out new dance tricks. He spoke to performers like Pierre-Charles—straight, and used to fast breakdancing that Antonio urged him to slow down. He helped envision detailed, synchronized and dizzying projections by Robert Diaz and Daniel Eugene. Some in flashing black and white, others in vibrant color.

“I wanted to make it more fun, more celebratory … to go a different route,” he said in a talkback after the rehearsal. “To go with emotions. How emotions become your inner monster, how they are there with all of us. Whether it is from depression, being loved, mind games, society. Those things are all of us, and they are things that we don’t want to talk about.” 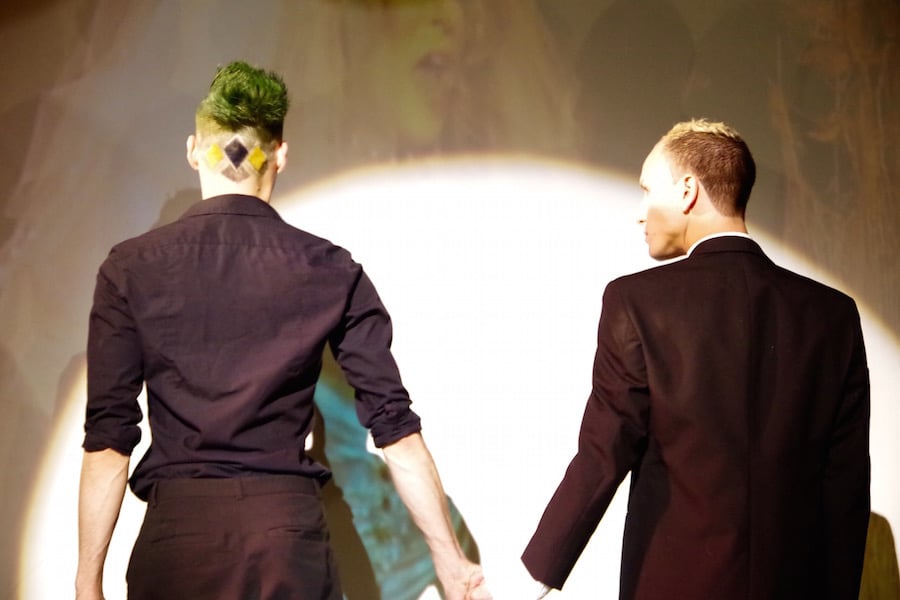 Antonio and Eugene during "It Should Haven Been Me."

What comes out of that is a performance that’s not just fun and quirky—although it is both of those, several times over—but also deeply affecting. In a sort of prelude to the show, dancer Mimi Zschack creeps onto the stage dressed in a white top over a black leotard, the red of her lips and dark shock of her hair playing against the dark stage. As she begins to move, each breath and gesture balletic, images of gay and women’s rights marches, protests for human rights, and pride parades flash up behind her.

Someday/Life will be fairer/Need will be rarer/And greed will not pay, sings Ciara Renée, vocals soaking everything in the theater. A sign on screen reads “Gay Power/Black Power/Women Power/Student Power/All Power To The People” behind her. 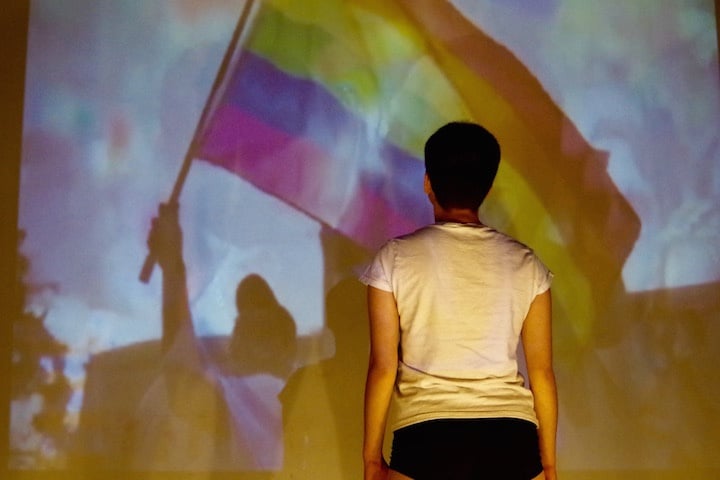 God speed/This bright millennium/On its way/Let it come/Someday continues somewhere above the stage.  When Zschack finishes with her back to the audience, still against the vibrant image of a pride flag, it is all you can do to keep a lump from forming in your throat.

That’s also the case for Christina Aguilera’s 2009 “Hurt,” a tour de force with local queen Sylvia Heart, Antonio and Zschack. With a bright white backdrop, Heart leans into the lyrics I’m sorry for/blaming you/for everything/ I just couldn’t do as Antonio and Zschack link arms and dance before her, stunning the audience as they melt into one slight, lyrical form. Diaz' use of light and shadow in this piece and others is masterful, making shakes upon shakes dance toward the wings. 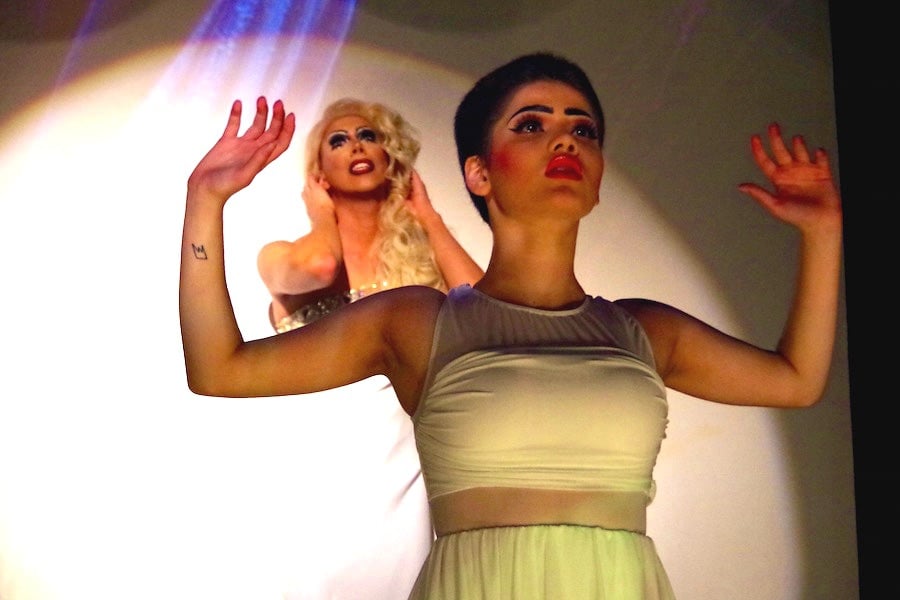 It may leave you verklempt. But Escapade: Experience The Madness is also incredibly hopeful, drawing on the histories of camp and cabaret, Latin dance and performance, and the intersection of theater and visual art. With what she called a newfound “fearlessness,” Selena DuSoileil takes the stage by herself, bringing the ensemble back on for a performance of “It’s Raining Men” that conjures The Weather Girls themselves.

Multimedia artist Daniel Eugene, a first to Escapade but not to drag, reembodies Sinatra with “That’s Life” and “My Way,” making them fully his own in a crooning, vibrating voice that curls around Antonio’s body as it dances. In another piece, he and Antonio perform a measured, meditative series of movements to Yvonne Fair’s “It Should Have Been Me,” with video of Sassie dancing jubilantly in a wedding dress in the background.

“Queer historically has been the inevitable norm,” he said after Thursday’s rehearsal. “So what was queer 20 years ago is normal now, and what’s queer now is going to be normal in 20 years. I think the statement that I’m ever trying to make as an artist and a performer is to bridge that fucking gap." 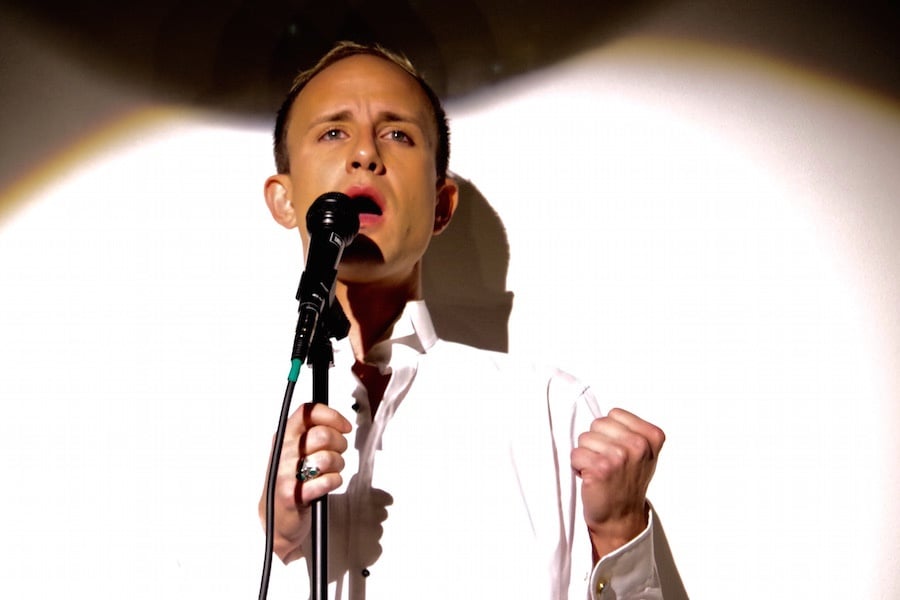 “It doesn’t need to take 20 years for the rest of society to come around and realize that the queer people know where it’s at,” he added. “And I’m not even just meaning sexuality or gender identity. I mean, if you have thoughts that are iconoclastic and that challenge norms, that’s queer thinking.”

Earlier in the evening, new addition Paloma Carrera had made those words very much her own. A ballet teacher in New York during the day, Carrera bound the histories of Latin soul, theater, drag and classical dance as she took the stage to La Lupe’s rendition of “Fever.” Channeling La Lupe’s epic and immersive performance style, she transformed into a human tornado, punctuating the air with her jutting, swishing hips and each turn of her body. 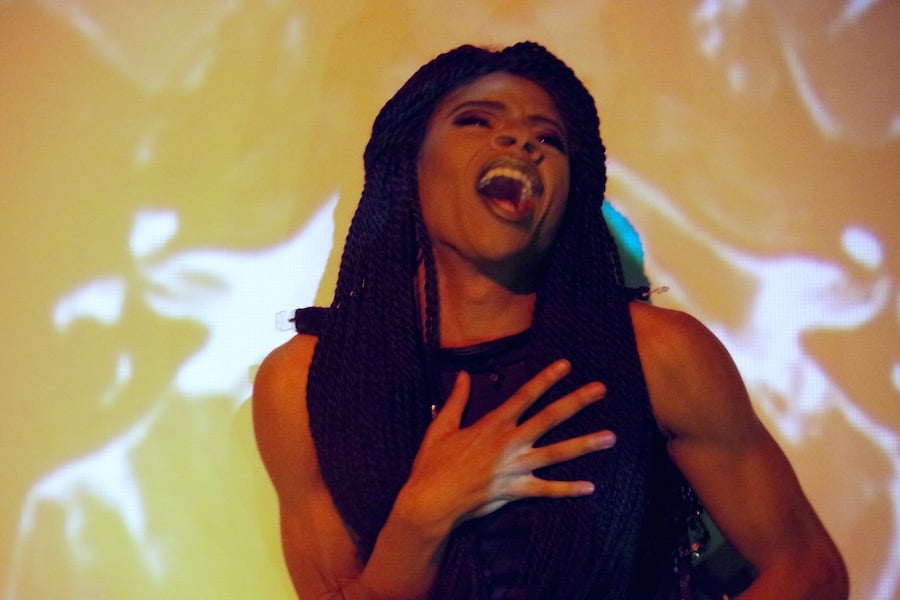 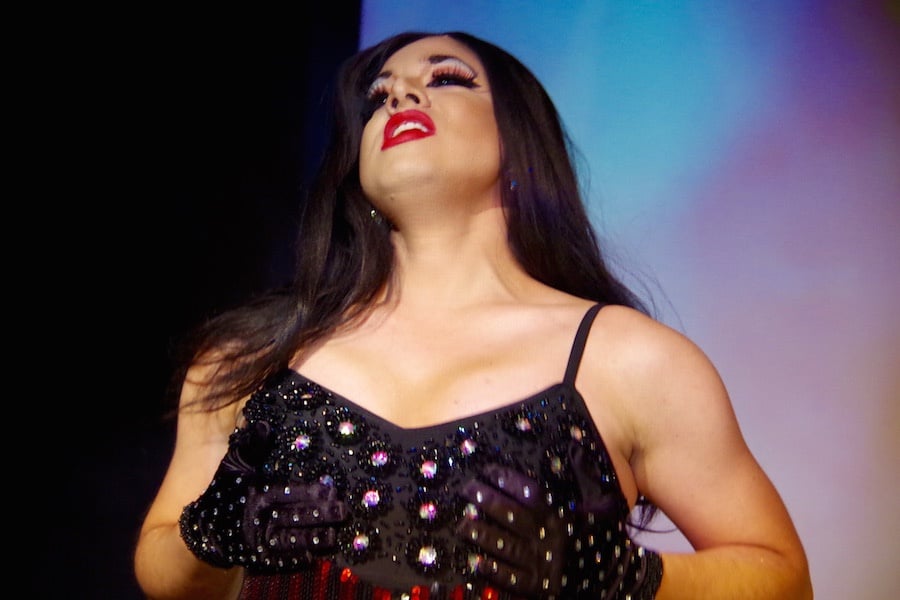 She was back, totally transfixing, as she performed Celia Cruz’ “La Bomba Colera” in pointe shoes during the second act. After the rehearsal, she said she carries those performances—and Escapade—with her as a reminder of how far culture has come, and how far it still needs to go.

“It is very important to make the youth understand how we have to keep fighting for human rights. At the end of the day we are all human and we need that support. We need to be able to express ourselves the way we are.”

“When you are performing,” she added, “You never know when you can touch some people’s lives.”