“We Are That Minyan” 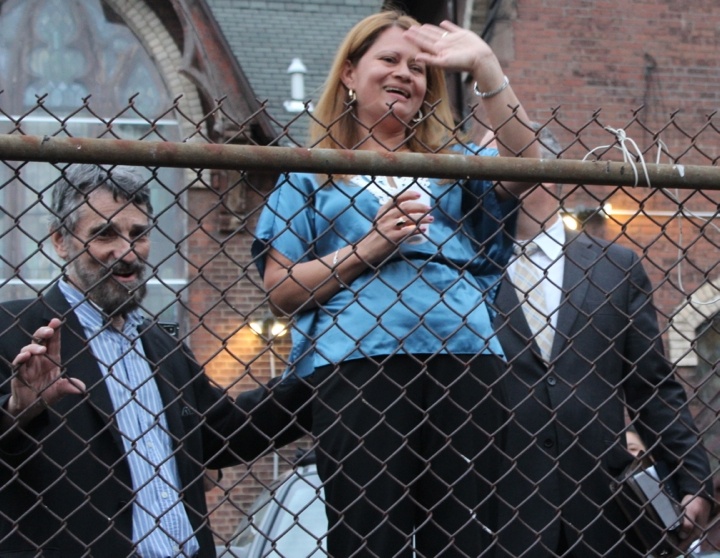 At Congregation Mishkan Israel (CMI), there is a certain routine to Yom Kippur. Across the greater New Haven region, congregants wake up to greet the day, some forsaking food and others choosing not to perform a ritual fast. Some have prayed the night before, at sundown Kol Nidre services, and they’ll pray again for some or all of the day until dusk gives itself over to dark, and they scatter to break fast dinners around the city. In between, they’ll each complete a cheshbon hanefesh—accounting of the soul—and pray to be inscribed in the book of life for the following year.

Yom Kippur is the day of atonement, the holiest of holy on the Jewish calendar. And the man holding it all together at CMI, as many teeter on the sharp edge of their hunger, is Rabbi Herbert Brockman, who has led CMI’s Yom Kippur services for the past 30 years, and served as its rabbi for the past 31. In June of next year, he will hand over the congregation to a new leader,  stepping down after 52 years of rabbinical teaching and three decades in Hamden. A career that has spanned small-town Texas, West Virginia, and Illinois, and cities Baltimore and Philadelphia will end in Hamden, as the reform movement faces new challenges.

But if he was thinking about that last Saturday, his final Yom Kippur to preach “with integrity, and honor, and thoughtfulness and yes, humor,” it was only as a teachable moment. As sunlight streamed in from the large, stained-glass blue windows and the choir loft rustled to stillness, Brockman took the bema or pulpit not with an expected valedictory speech, but advice for the future.

Already, he had led close to 200 attendees in the morning’s prayers of atonement, pausing as layered voices from a choir loft came swooping overhead, lifting the prayers up off the ground. Carrying the torah around the synagogue, he had stopped and bent over for a young girl on one side of the sanctuary, who was hiding from him against her father’s legs. He had guided a young reader through his torah reading.

“Each and every high holy days, I would try to share a vision of who and why we’re here,” he began. “Of what Judaism can mean in terms of our personal and collective lives, grounded in a tradition that has somehow managed not only to survive, but thrive.”

Those words dovetail with CMI’s mission, said Brockman. Founded by a cluster of German-Jewish families in 1840, CMI has long aligned itself with a tradition of social justice. In the latter half of the 19th century, the synagogue was among a handful to take in Jews fleeing Tsarist persecution in Russia. Following World War II, the it supported survivors in DP or Displaced Person Camps. In 1947, then-Rabbi Robert Goldburg traveled to Israel before it was Israel, to learn about what a Jewish state might actually look like.

That continued when Brockman was hired 31 years ago, with an “offer I couldn’t refuse” from Goldburg. It was just days before the high holidays, and he was unable to leave his congregation in Philadelphia until it found a replacement. When he arrived later that fall, Brockman said he realized “that this was a community of menschen,” dedicated to folks beyond the synagogue’s walls, and beyond their faith itself. As he undertook his first Yom Kippur at CMI the following September, the weight of continuing a centuries-long legacy settled on his shoulders.

“That night, 30 years ago, I wondered: What were my responsibilities? What promises could I make?,” he recalled. “I felt very fortunate—I was humbled by this place.”

He soon found them, he continued. That night in 1987, “I reminded the congregation, ‘For 147 years, this congregation stood staunchly against the flood of discrimination and alienation in the new world, proclaiming [that] not only the Jews have a share in this promise land, but that they could contribute in helping America in achieving its goals.”

Since, he has stepped into that leadership role by breaking down barriers to access, and opening the congregation as he can. In 1986, he helped establish the synagogue’s first abatement committee, a sort of task force addressing the issue of members who could not afford their annual dues. In the late 1980s, CMI continued its “open doors” policy as it sponsored seven Russian families, refuseniks who had been denied emigration for so long, as they were finally allowed to leave a crumbling Soviet Union. It began the Pe'ah Project, using its land to grow vegetables for area soup kitchens.

In the 1990s, CMI sent a delegation to Israel, to discuss the ongoing existence and future of a Jewish state. Near the same time, the congregation also raised funds to support the emigration of Ethiopian Jews to Israel through Operations Moses, Joshua, and Solomon. In 1993, the synagogue invited Riad Mansour to speak about feuding factions and the Palestine Liberation Organization, for which 800 attendees packed the synagogue. It was the only synagogue in which Mansour had ever entered, and ever spoken. Brockman led the congregation as it sponsored a Bosnian Muslim family in 1996, and then an Iraqi family six years ago “as war ravaged their country and their lives.”

Then before Rosh Hashanah two years ago, members were called to action again. They, and Brockman, had seen the image of 3-year-old Alan Kurdi washed up on shore in Turkey, having drowned at sea while trying to get to the Greek island of Kos with his family. He had been “in search of a safe shore,” said Brockman. And in that moment, the the congregation “knew that we had to be that shore.”

Members helped form the Jewish Community Alliance for Refugee Resettlement (JCARR), a grassroots coalition of five congregations including Congregation Beth El-Keser Israel, Congregation B’nai Jacob, Congregation Mishkan Israel, Congregation Or Shalom, and Temple Emanuel. Together, JCARR members have been working with Integrated Refugee and Immigrant Services (IRIS) to resettle refugee families in the New Haven and the Greater New Haven area. Since, they have helped resettle three families—a speck in the 60 million refugees seeking help around the globe.

It has not always been easy, he told congregants. “Every congregation struggles with the challenge on one hand of supporting the congregation, on the other hand being open and loving to all of its members,” he said.

But, it has been necessary with changing political administrations, he said. An obligation to honor a history. Last year, CMI joined First and Summerfield United Methodist Church, Iglesia de Dios Pentecostal, and Hamden Plains United Methodist Church as a sanctuary congregation. It what's repeatedly supported the Immigrant Bail Fund, and will do so again on Oct. 12.

“Our purpose here is to celebrate, to sacramentalize human life. We must reject whatever demeans human life,” he said. “In the end we are not here to preserve a mausoleum … It is essential that the ideas and values and actions that emanate out of here will be relevant to the times in which we live. We celebrate not only a physical structure but an inherited tradition, that moves us to build it and then to build up ourselves. That tradition is one of noblesse oblige.”

“We will continue to welcome the stranger as long as we can,” he continued. “Not only as Jews. I remember saying 30 years ago that while this comes from our history, it must also be personal for each and every one of us.  Our experience as a people has informed what it is like to be ... a people set apart. How we were denied refuge, and the high price we paid when others turned us away.”

He reminded congregants that America’s first Jews were Spanish Ladino Jews, “with names like Lopez and Gomez and Duarte and Nunez and Pinto." That they were  the ones to welcome German and Eastern European Jews from the late 19th century into the first half of the 20th.

“You are not other, you are our brother,” he recalled saying at a recent meeting of Junta For Progressive Action to drive home the point. Indeed, he said he sees this kind of interfaith collaboration as integral to the practice of Judaism itself.

“What in God’s name are we doing?” he asked, looking out of a rapt congregation. “Do you remember who the first Jew was, according to our tradition? When Noah learned of the earth’s destruction, what did he do? He immediately went out to build an ark, and his humanity was saved. At least for the time. He is not honored as the first Jew.”

“When Abraham on the other hand saw that the cities of Sodom and Gomorrah were to be destroyed, he argued with God! He demanded of God justice. He broke his father’s idols. He was the original iconoclast. He was the founder of the Jewish tradition.”

“The torah’s lesson was that for the sake of 10, those cities could be saved. 10 righteous people can save us. The minyan. This doesn’t take unanimity, it doesn’t take a majority. It just takes a minyan. We are that minyan.”

Heads bobbed back and forth around the room, a sea of manicured cuts and soft fabrics. This, Brockman explained, is the kind of action that Judaism demands.

At least, the Judaism to which he subscribes. Orthodox Judaism has been gaining traction, as reform congregations age and slowly shrink. So has the number of young unaffiliated Jews. He rattled off a series of figures: 14 percent of the Jewish community belong to reform synagogues, while 10 percent are in Orthodox, and the majority are unaffiliated. 42 percent of Orthodox Jews are between the ages of 18 and 29, while only 19 percent of Reform Jews are. 83 percent of Orthodox Jews are married, while only 52 percent of Reform Jews are. The numbers continue.

“The trend is clear,” he said. “As American Jewry turns more traditional, we see a growing segment of our co-religionists be more family centered and less community involved. More politically conservative, more identified with conservative elements in Israel as well. While much of the Orthodox community remain entrenched here in the New York/New Jersey area, liberal Jews in New England are moving south, to places where they have no connection or affiliation. How this will affect our congregation and our community is yet to be seen.”

What CMI does know, Brockman said, is not good news to him. At the synagogue, affiliation “has dropped precipitously,” and yet not as drastically as at other congregations in Connecticut.

For Brockman, it signals a coming storm. But not one that he thinks the congregation will be unable to weather, he said. Recently, he received an email from a CMI parent that contained a picture of her daughter, now a young woman who grew up at Mishkan.

She was at a protest, holding a handmade sign. This is the moment I trained for in Hebrew School, it read.

“I could have not been more proud,” he said. “The torch is passed.”

This article is part of our new “News From The Pews” series, exploring the intersection of religion and spirituality and current events. If you’re a member of a congregation — any denomination, anywhere in New Haven — and think your institution should be profiled, send an email to lucy@newhavenarts.org.