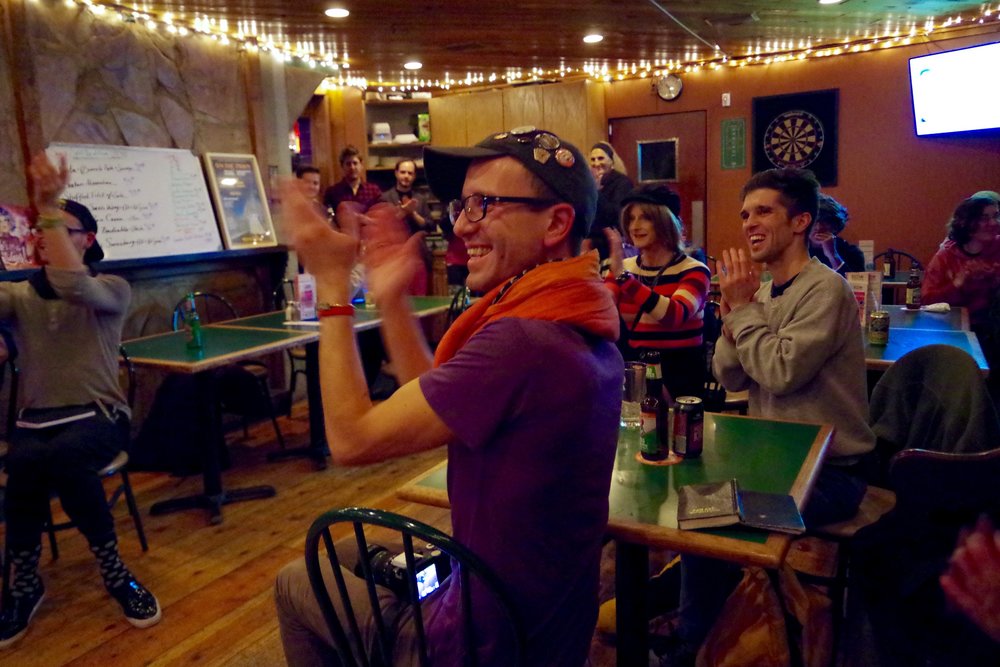 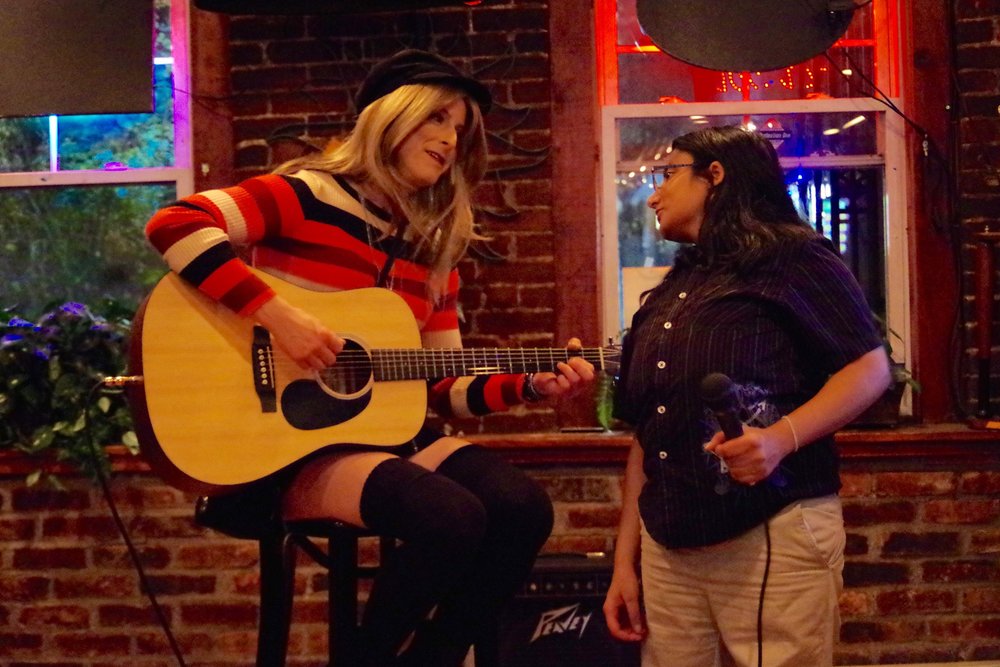 It wasn’t clear exactly when bar started singing along. One moment, Sinthea Sinatra was really feeling the guitar as it climbed up a four-chord progression. Before her, Ivan Sheth lifted up the microphone, channeling the band 4 Non Blondes.

What was going on, in fact, was the first annual Transgender Open Mic Night, a small but jubilant celebration of New Haven’s trans and trans-supporting community. Held Wednesday night at 168 York Street Cafe, the event brought out singers, songwriters, spoken word artists and musicians as part of Transgender Awareness Week.

Through the New Haven Pride Center (NHPC), a suite of awareness events will be running through Monday evening. Check out the full schedule here.

“We’re here to shine light on the trans community,” said organizer Luis Antonio, who proposed the event to NHPC Director Patrick Dunn several weeks ago. It’s a community Dunn called “very very close to my heart,” at the event.

“I’ve known trans people since I came out,” he said. “It’s so important to me that all of you feel safe. I hope that I live up to my job to create safe spaces for you in New Haven and beyond.”

From the beginning of the night, Antonio kept the crowd upbeat, watching as it swelled from 10 to 20 over two hours. As it grew, longtime community member and singer/songwriter Lacy Joy Whitefeather took the stage with her guitar in hand, spinning her life story into the fabric of New Haven itself. It was a chance to celebrate the city that had made her her, she said.

Born and raised in New Haven, Whitefeather grew up on Legion Avenue, watching the city transform from a gritty downtown as Yale bought up more properties. Overwhelmed by social stigma, she didn’t come out until the early 2000s, and was then called a transvestite when she started wearing skirts and dresses. She knew who she was, she said, but she also felt alone.

But before that, she told the crowd, she had one space that let her feel at home—a divey jazz club called McTriffs Cafe on Park Street. She had started attending at nine or 10 years old, when “I was too young to be out walking by myself.” The owner had seen her interest in the jazz musicians and let her sit with his wife during performances. She’d stay for hours, and then head home with a head full of new musical melodies.

“I felt it in here,” she said, holding a hand to the righthand corner of her chest. Then she launched into a piece she had written, the words I walk the streets as a child/To the sound of my own footsteps/How I’m swallowed up inside floating over the crowd. 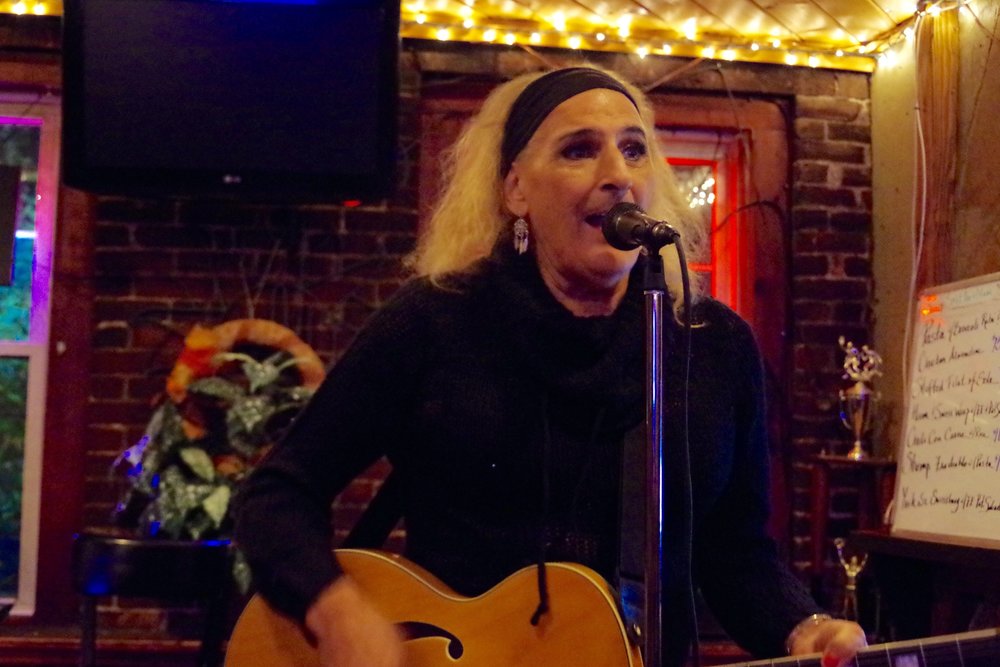 Wednesday’s performance marked a different kind of milestone, she added. Four and a half weeks ago, Whitefeather had gender reassignment surgery, the biggest step she’s taken since legally changing her name in probate court in probate court in 2014.

“When I came out, there was no one else to play with,” she said at intermission. “I think it’s wonderful to allow transgender folks to get up there, to share their music and their personality with everyone.”

“Up until today, it’s been a struggle,” she added of the pain she had had since her surgery. “But right now I feel great. Being transgender to me is a wonderful thing. So I’m happy to be here more whole than I was before.”

A trickle of other performers echoed that message, bringing to the stage both original songs and covers. Performing a few verses of Kesha’s “Rainbow,” Raven credited the song with “literally, helping me get out of bed in the morning.” Chardonnay Merlot read two original poems (listen to one below). Daniel Eugene conjured ghosts from 2011, probing androgyny in a piece that had him naked, in front of a mirror, staring curiously. 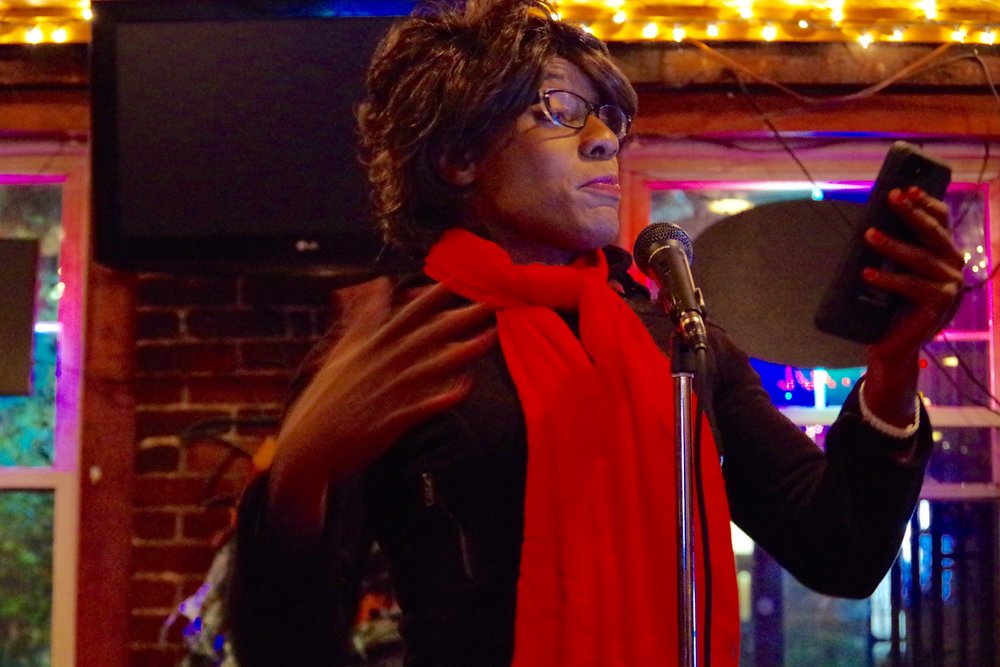 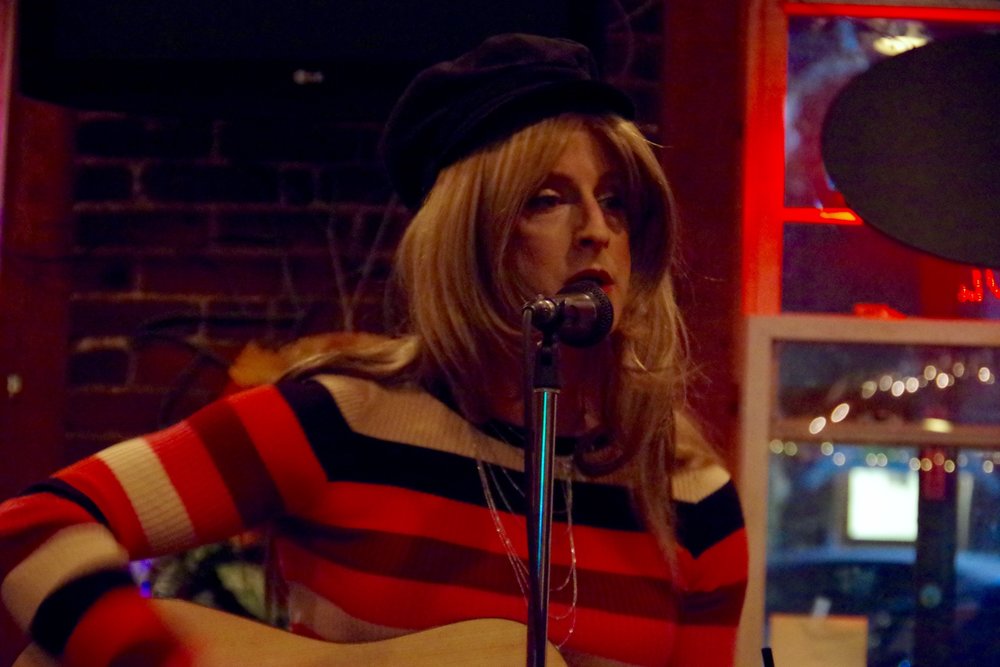 A surprise performer of the evening, Maya Leonardo hypnotized the room with her lap-sized synthesizer, working its knobs and levels from a crouch on the floor. Inspired by artists like Skinny Puppy, Leonardo moved to New Haven from upstate New York a year ago, after a stint in the Elm City four years ago.

“I feel like there’s a lot of welcoming, vibrant community around New Haven,” she said. “There are a lot of people who care about the town … it makes me feel really comfortable and welcome.” 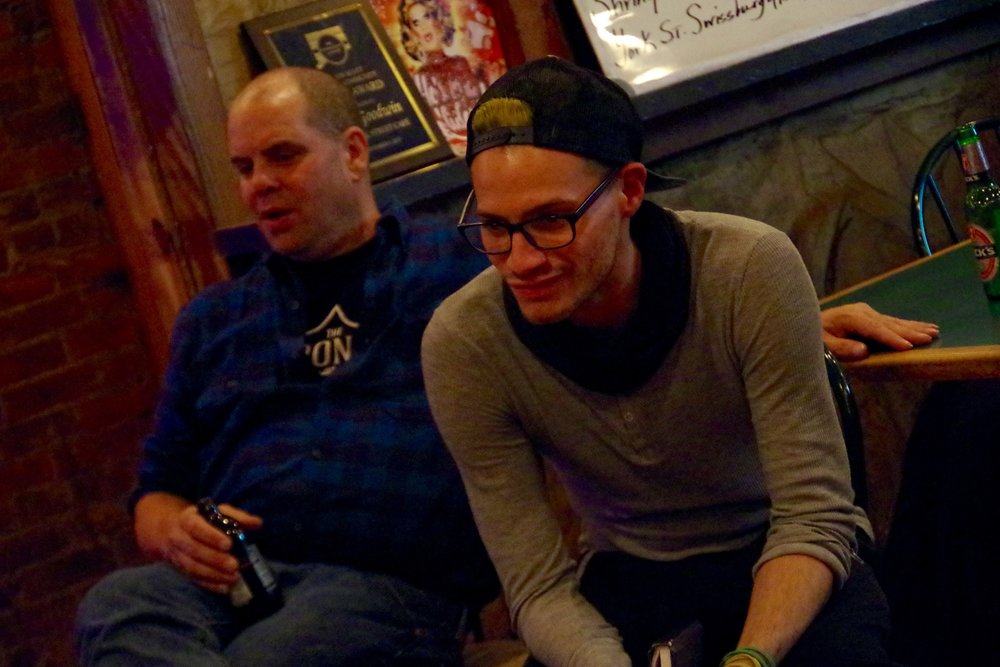 “I think it’s a good way to come together as a community,” said Sinatra. A songwriting veteran—she has been performing in New Haven and New York for at least 30 years—she said she was glad to see the event added to a week-long, celebratory Transgender Awareness Week. “We’re not coming alone. People are here together for one common cause.”

Then she and Sheth launched into a second song. The sound of Melissa Etherige had hardly entered the room before the audience joined in.