Library Lays Plans For A Cafe 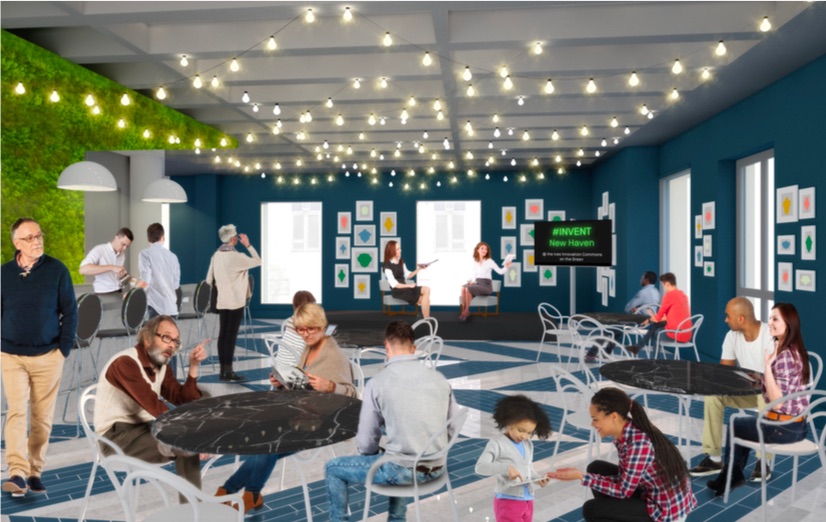 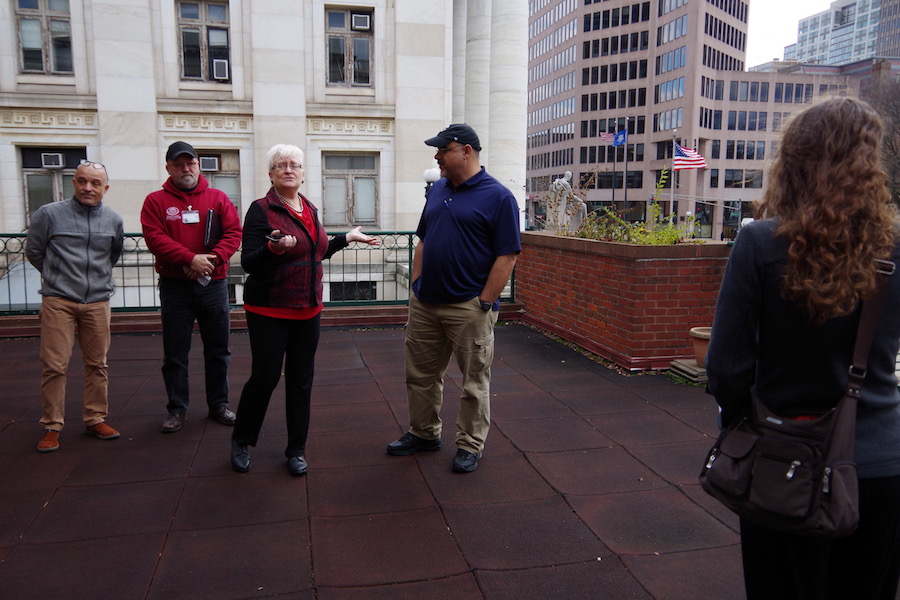 City Librarian Martha Brogan out on the library's Ives Branch patio, which faces out toward Elm Street and gives an elevated view of the city. Lucy Gellman Photos.

The New Haven Free Public Library (NHFPL) doesn’t like cups of coffee coming through the front door. But that might change in April, as patrons wander inside to borrow books—and leave fully caffeinated.

That’s the plan for a new cafe for which the library is currently seeking vendor proposals. Monday morning, City Librarian Martha Brogan, City Capital Projects Coordinator William MacMullen, Architect Brian Cleveland and a handful of vendors gathered for a walkthrough of the space, which is expected to open April 2 of next year.

A rendering that the NHFPL is including in its call for proposals. Image courtesy NHFPL.

After setting the deadline for proposals for Nov. 28, the library has pushed it back to Dec. 5 to allow more vendors to apply.

The project comes as part of Ives Squared, a digital innovation hub and coworking space that the library is preparing to build on its first floor, where shelves with paperback fiction and a few chairs currently look out onto Elm Street. When it is finished, Ives Squared will include an “Innovations Commons” with a person-to-person “switchboard,” tinker lab with high-tech equipment, and multiple coworking spaces. The cafe will fall at the center of that space, extending to the building’s outdoor patio during warm months.

Brogan pointed to similar examples in Tulsa, Austin, Madison, Cincinnati, and Philadelphia. She said the library expects construction for the project to cost between $800,000 and $850,000, most of which comes from the city's capital budget. An additional $150,000 comes from a CT Innovations grant that will cover some of the hub’s newest equipment. The library has already hired Buchanan Architecture for the project; Brogan said it is expecting to sign with a construction firm before the end of this month. 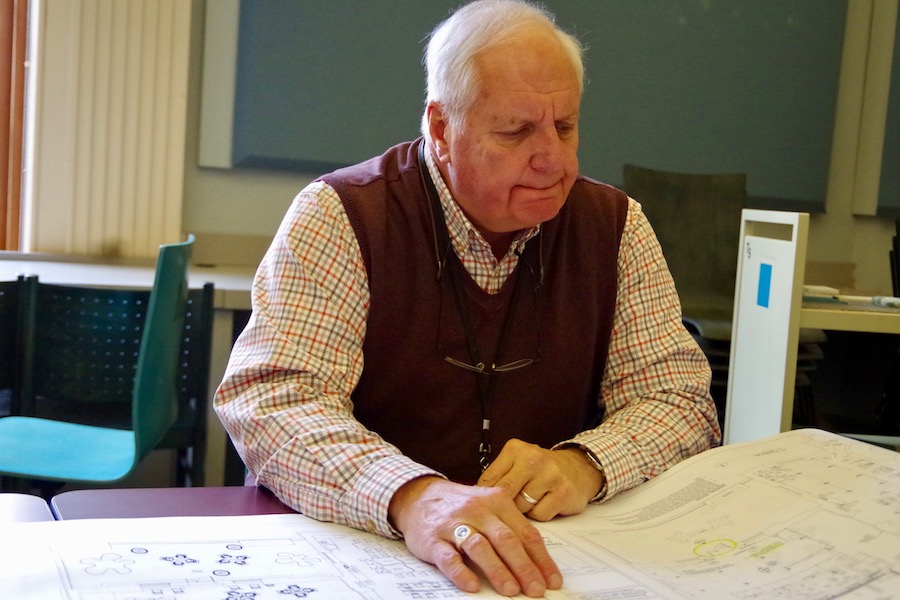 “The idea is to reactivate the space for entrepreneurs, for community, and for collaboration,” Brogan said on Monday. “We want to build on the idea of New Haven as a city of invention … to partner within a larger creative ecosystem of the city.”

Brogan said the library has reached out to between 15 and 20 vendors from the greater New Haven area. On Monday only a handful showed up, bringing questions with them as they refined proposals. Among them were newbies Dan Blomberg and Amber Bennett, Wallingford natives who said they have been interested in opening a cafe since graduating from culinary school several years ago. Trailing just behind them was Viswanath Parajuli, a representative from Dunkin' Donuts. From just down Elm Street, Bruce Ramirez of Cafe Java said that he is interested in opening a satellite with his cousin Dominick Splendorio, who runs Zafra Restaurant and Rum Bar on Orange Street.

“I’m interested in checking the space out,” he said before Brogan led the group on a walk through. He’d come with questions: were there naming constraints for vendors (no), or can they call the cafe anything they want? What is the workspace going to look like? And what are the constraints without a working kitchen? 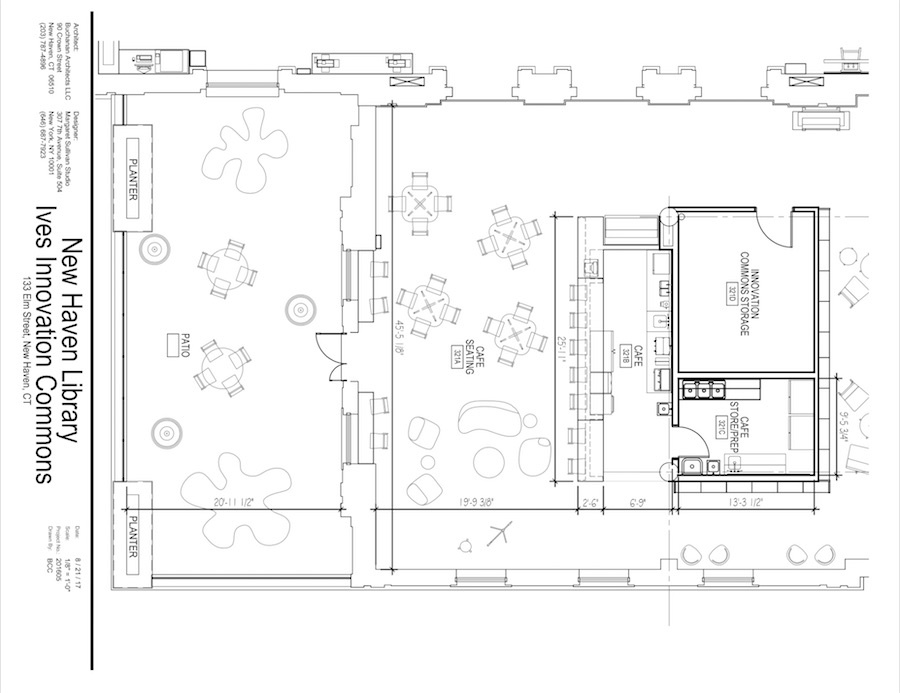 Brogan and MacMullen explained that vendors will be responsible for the inner workings of the cafe, including everything from staffing to equipment to fire and public health codes. They are likewise expected to shoulder the cost of equipment. Plans for the cafe already include a prep sink and prep area, but no oven. The two confirmed that vendors would have to check with the fire department when questions about a toaster popped up from the group.

There’s a perk, they added: 300,000 annual built-in customers, and the first right of refusal for all events for which the NHFPL needs catering. 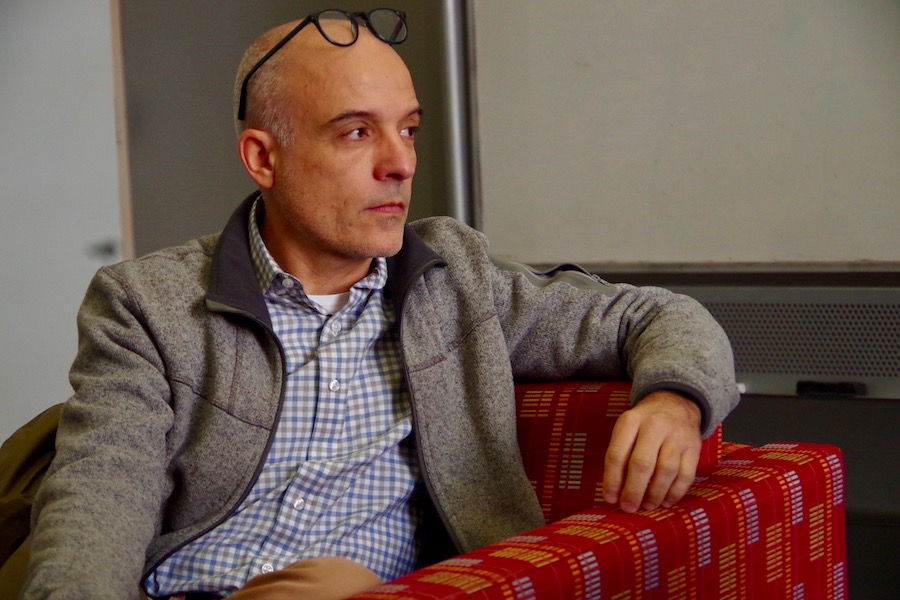 Corazzini: What could be more European?

Ramirez wasn’t the only coffee veteran in attendance: Andrea Corazzini of Whole G Bakery and Cafe also showed up, with interest in opening another outpost after a short-lived Ashmun Street location closed last year. After spending the majority of his time on the bakery end of things, he said he hopes to get back to day-to-day interactions at a cafe.

While he said he does not have a name for a potential Ives Squared coffeehouse, he imagines that it would be named G Cafe like a similar shop on Orange Street.

“I’m most excited about social impact of this cafe,” he said. “It’s more about being here—combining a library with coffee is such a charming European idea.”