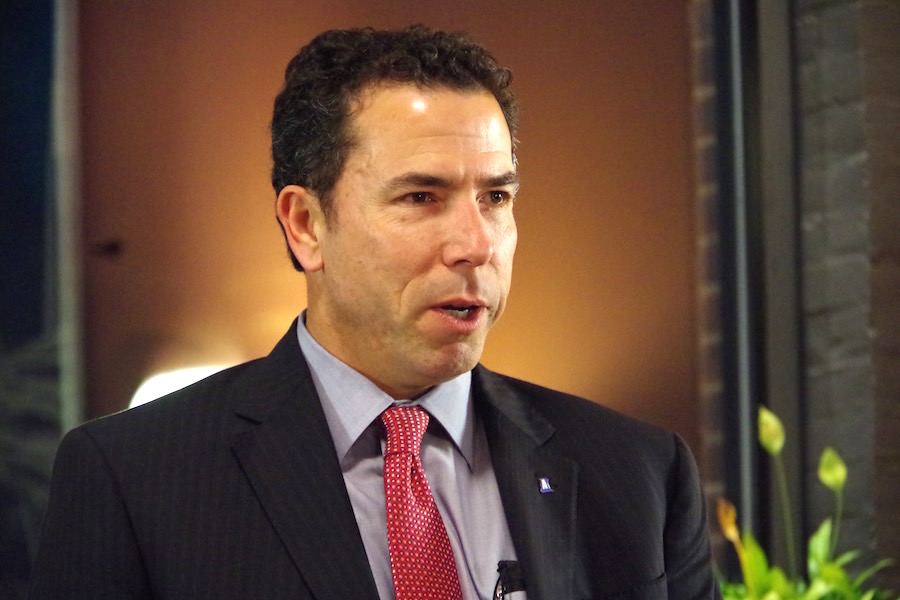 After vowing to to make Albertus Magnus more community-focused, university President Marc M. Camille is starting to make good on his word— by pitching a stronger city-school partnership to community management teams.

Camille made that case for Albertus Magnus College at the East Rock Community Management Team’s monthly meeting, held Monday evening at mActivity Fitness on Nicoll Street. Between 20 and 30 attended, including alders-elect Abby Roth, Charles Decker and Newhallville newcomer Steve Winter. It is likely the first time a college or university president has attended and presented at that meeting, said Chair David Budries in an email exchange on Tuesday.

Camille formally began his tenure at Albertus Magnus on Aug. 1 of this year, after a campus-wide welcome celebration in March. He replaces Julia McNamara, who served for 34 years before stepping down in 2016.

At that celebration, he made a promise to lure more first-generation undergraduates to the school, expand course offerings, and do better outreach in the New Haven community before the college’s centennial in 2025. Currently, the student body is approximately 1500 and includes both full and part-time students, as well as students who are doing their class and degree programs online.

Now, he said at Monday’s meeting, he can see how much work there is to do.

“It’s become apparent to me that there is great respect for the college … but I’ve also come to appreciate that it is kind of a quiet respect,” he said. “It’s up on the hill.”

“For any college that is part of the New Haven community to make meaningful contributions …  we have to be a meaningful partner,” he continued. “We are surrounded by Newhallville, East Rock, Edgehill/Ronan. All of these communities that touch the campus.”

It comes at a critical turning point for the college. Next year, Albertus Magnus is embarking on a planning process “that will start to point us toward a vision and ultimately strategic direction” for the college’s centennial.

While Camille did not have specifics on the process, he said that he is “meeting with anyone and everyone” he can to get community responses to the college, and information on how it can be more helpful. He said he has already met with the Newhallville Community Management Team and is planning to speak to the Ronan Edgehill Neighborhood Association in the next several weeks.

“If you have ideas, suggestions, I welcome them,” he said. “One of the things you’ll get to know about me over time is that I listen. It doesn’t mean that every idea that comes forward we can act on. But I will tell you that before I ever make any leadership decisions, I think about them. I reflect on them.”

His pitch ended with two invitations. The first, next week, is to a campus Christmas tree lighting that includes carols, hot cocoa, cookies, and pictures with Santa. The second is his inaugural weekend,which will be held on May 3 and 4 of next year. As part of those dates, the college will be holding a community service day on Saturday May 5 “to try to have impact in New Haven on that day.”