Before Me Too, There Was Stop Kiss 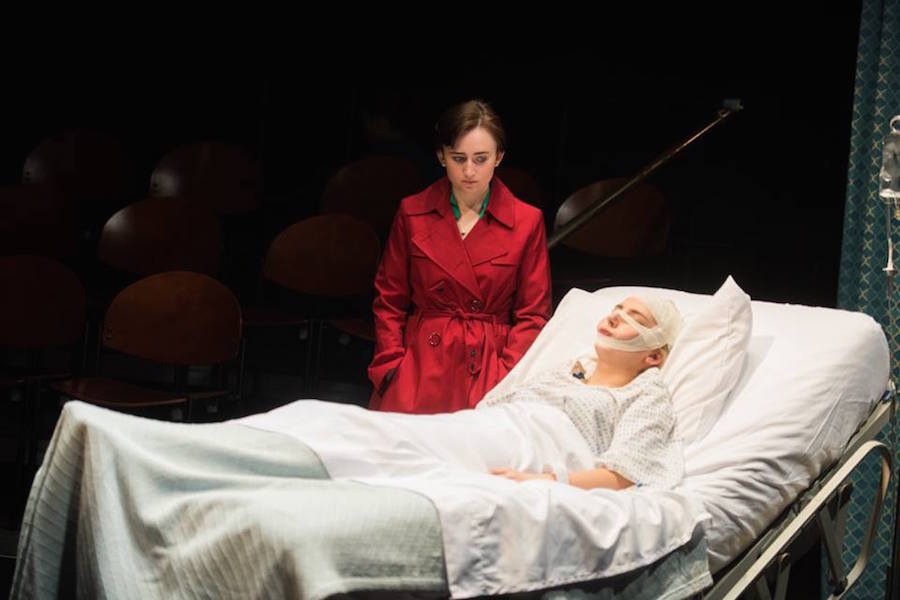 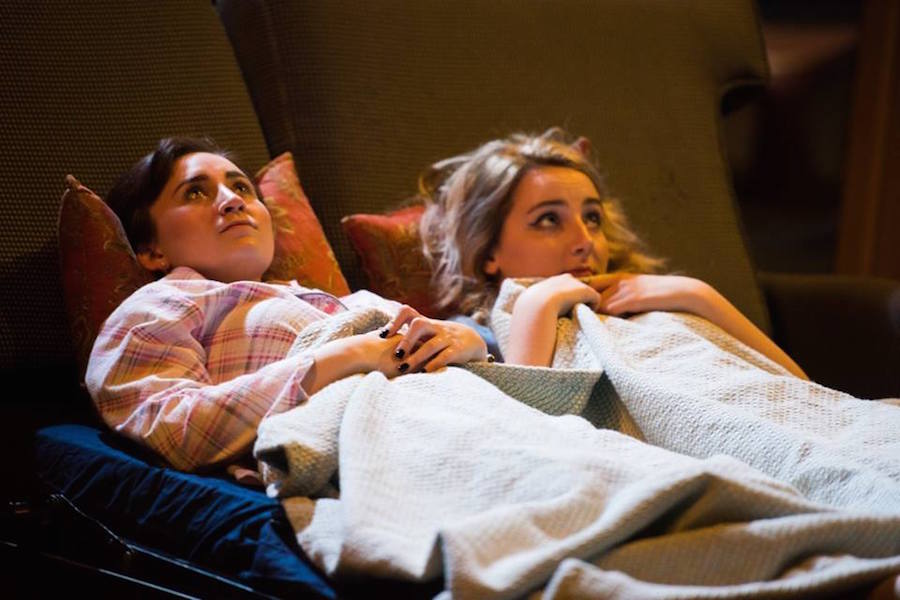 Cunningham as Callie and Byron as Sara. SCSU Photo.

Raphael Massie has this thing for music in plays. In Elm Shakespeare’s Romeo & Juliet, it was Beyoncé and Adele, played at show-stopping volume as characters sculpted their worlds around the lyrics. In Diana Son’s Stop Kiss, on at Southern Connecticut State University through Sunday, it is in a nostalgic nod to 1990s New York City. The idea, that is. Not the place.

It doesn’t work. But thanks to an intrepid cast, it doesn’t totally matter, either.

Written and workshopped at New York’s Public Theater in 1998, Stop Kiss tells the story of Callie and Sara, two women assaulted after their first kiss in New York’s West Village. The year is 1998, and the two are feeling their way through a new friendship that is possibly something more, filled with the exuberant trappings of being twenty and middle/upper class in New York. 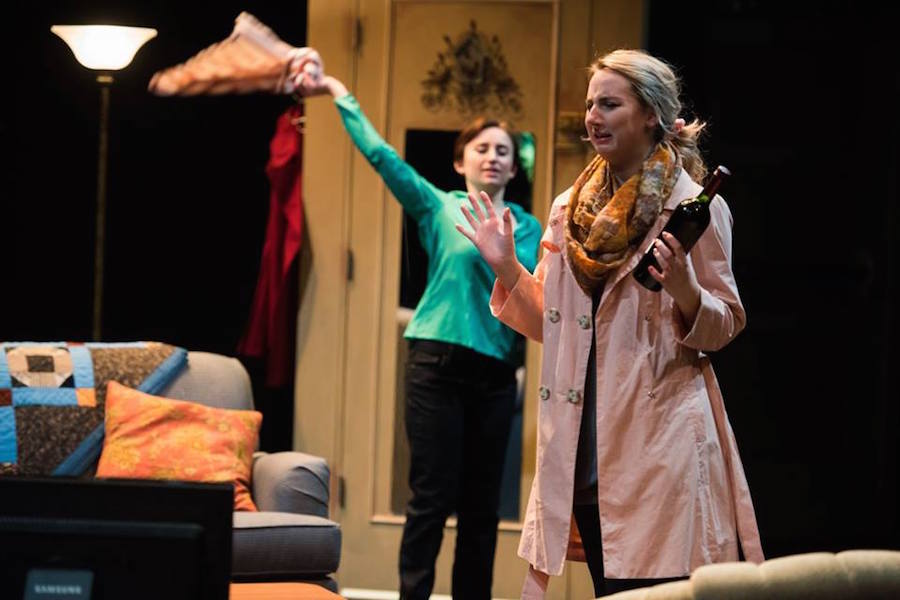 Instead of a linear narrative, the work is told in a series of 23 vignettes, hopping from Callie and Sara’s grief-wracked post-attack present to the months leading up to attack. We never see the attack, but learn about it through these flashbacks, discussions, and a series of news reports that are mentioned throughout the show.

In this form of telling, the women’s care for each other remains at the heart of the show, and is a reference point for the audience when the going gets really, really tough. In learning about the worlds they orbit, the two unwittingly expose bigotry lurking behind each door and corner, ready to attack with its sharp, glistening and vest-wearing fangs.

There are plenty of reasons it seems like the right time to do this play. Last year, the FBI tracked an increase in hate crimes against Muslims, Jews, and members of the LGBT+ community.  The same report revealed that LGBT+ people remained the most likely group to be the victim of hate crimes. Next year also marks the 20-year anniversary of Matthew Sheperd’s assault and death in Laramie, Wyoming, an anti-gay hate crime that spurred production of The Laramie Project.

It’s not just one type of hate crime the cast is trying to get at. In his forward to the show, Massie writes that “I do know these issues must be confronted and resolved. It is not okay to put people into categories and then hate them because of it. People are who they are, love who they love, and believe what they believe.”

It a statement that he speaks from his heart, that rings true as you wait for the work to start in an intimate black box theater, where chairs are arranged on all sides of the stage. You're bracing yourself for the bigots before they ever appear onstage, because you know they'll appear. 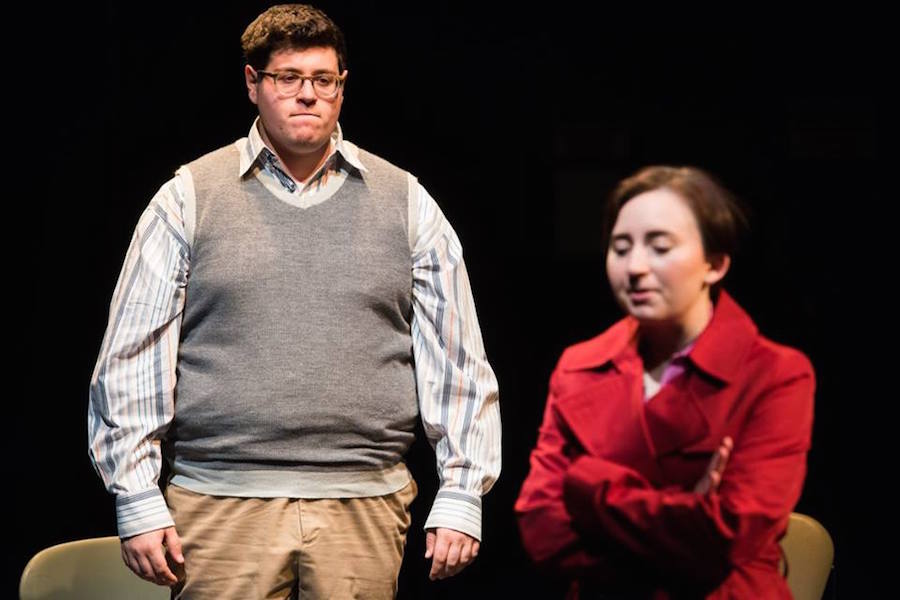 And yet, in every way, the play is a product of its time. It feels dated in everything but the crime itself. Between scenes where there could be silence, music is caught in a loop where the lyrics “New York” seem to be the only requirement, breaking up a narrative about two lesbians with music largely by straight white guys. New York is never quite defined as a place so much as an idealistic foil to St. Louis, whence Sara hails. And that St. Louis, a city so politically purple it pulses like one big bruise, is a punch line. The crime is fresh and stinging and still urgent, but the backdrop belongs to the sitcom Friends.

And yet, in the cast’s hands, there’s incredible grace and sweetness there. Maybe they need Stop Kiss as much as it needs them. Leads Maeve Cunningham (Callie) and Melanie Byron (Sara) bring it to life, perhaps at the ages where they too are starting to imagine being twentysomething and in the big city. Byron is particularly strong as the fiery and tenacious Sara, a pencil of a girl whose will and capacity to love both prove incredibly strong.

So is Cunningham, working through a job she doesn’t like and an unboyfriend she can’t shake as she figures out her sexuality. Their acting leads to some lovely, candid moments: a back-and-forth with covers when Sara’s feet get too warm, a ticklefest on the couch, their respective and even an argument that has been waiting to happen.

There’s also lot of heart in Mrs. Winsley (Angelica Palacios), who refuses to let Sara and Callie become a case study in the bystander effect. By the end of the show, she’s rooting for Callie and Sara, and we are too.

We should be. At its core, Stop Kiss is still the story of a relationship. Not of a hate crime and its aftermath, although that piece is fundamental to the play. With scenes of Sara in her hospital room, it is also a quiet call to power, asking activists, allies and everyday people to step up in a landscape wracked by violence and bigotry.

SCSU’s Crescent Players have designed it to keep the dialogue going after the lights have gone down, and actors have taken their final bows. Outside the theater, audience members come face-to-face with women and couples who have been assaulted and killed since the passage of the 1989 Hate Crimes Prevention Act. They are devastating in their volume and their timing: 19-year-old Mollie Oglin and 18-year old Kristine Chapa, shot in a Texas park in 2012. 24-year-old Britney Cosby and Crystal Jackson in 2014. 19-year old Elizabeth Marriott at University of New Haven in 2012. The list goes on.

They are enough to make you say aloud, there is still so much work to do. To say aloud, not one more, like a prayer.

Performances of Stop Kiss are Thuesday, Friday and Saturday at 8 p.m. and Sunday at 2 p.m. More information and tickets at the John Lyman Center for the Performing Arts website. Thursday night’s performance will include “a conversation with the audience on LGBTQI issues and other experiences with intolerance based on sexual orientation, skin color, gender, and disability.”