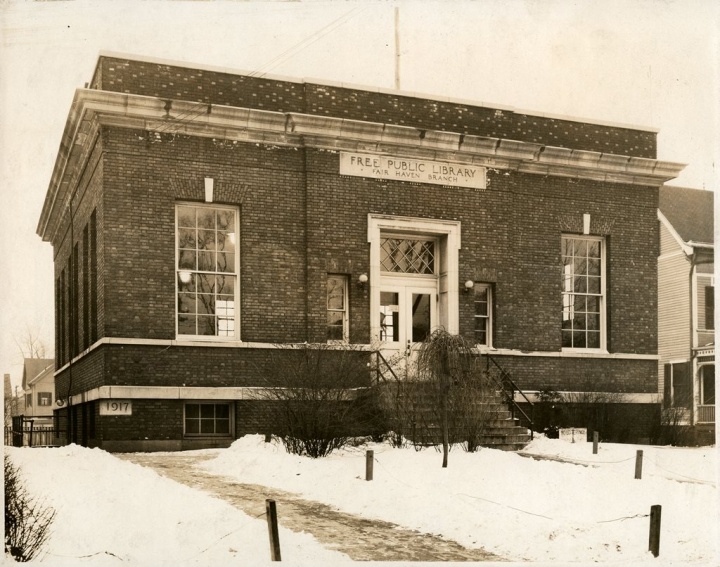 A stately building for all of Fair Haven’s youth. A safe haven, where one could learn what they didn’t teach in Catholic school. A temple to knowledge itself, with rows and rows of books that seemed to glow on the shelves.

These were the ways that the Fair Haven branch of the New Haven Free Public Library (NHFPL) was remembered and feted Saturday afternoon, as the library marked its centennial and looked forward to its next 100 years. Despite a rash of cancellations during the city’s first snowfall, the event went on as planned, drawing a small but enthusiastic crowd.

The branch, which has since expanded to a multi-room building with a New Haven Land Trust garden, had humble beginnings. Dedicated on Friday Dec. 7, 1917, it was one of 11 built through Andrew Carnegie's turn-of-the-century library initiative in Connecticut, and three in New Haven (the others were the Davenport and Dixwell Branches). Brogan said that construction was an initial $28,000, which translates to roughly $580,000 in 2017.

The NHFPL’s first quarterly bulletin, published in January 2018, gets into the nitty-gritty of those numbers. According to that publication, the entire cost of the building was $23,000, of which the Carnegie Corporation contributed $20,000. The remaining $3,000 was covered by the city, then under Mayor Samuel Campner. The site of the library, which remains the same, cost $5,000; residents of Fair Haven gave $1,000 of that and the city covered the rest. 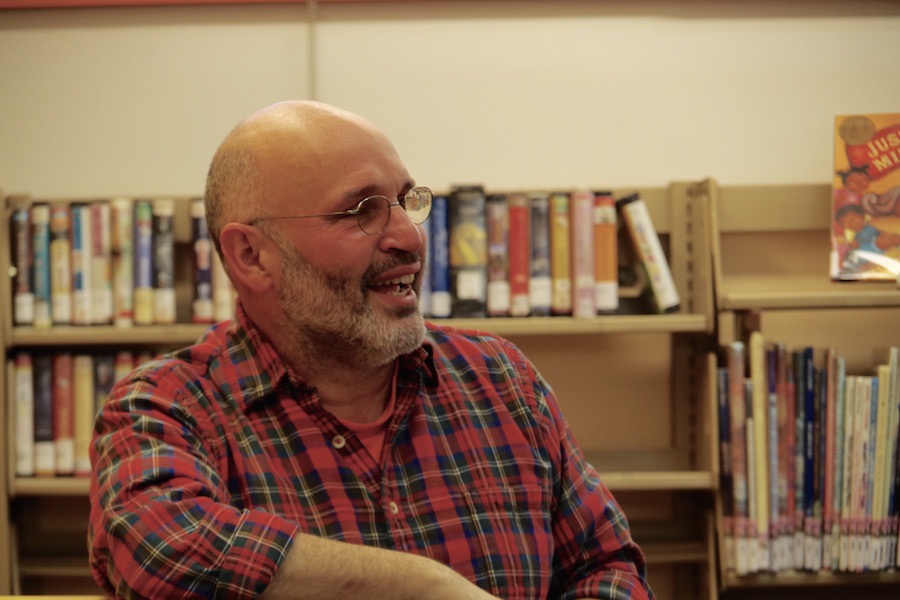 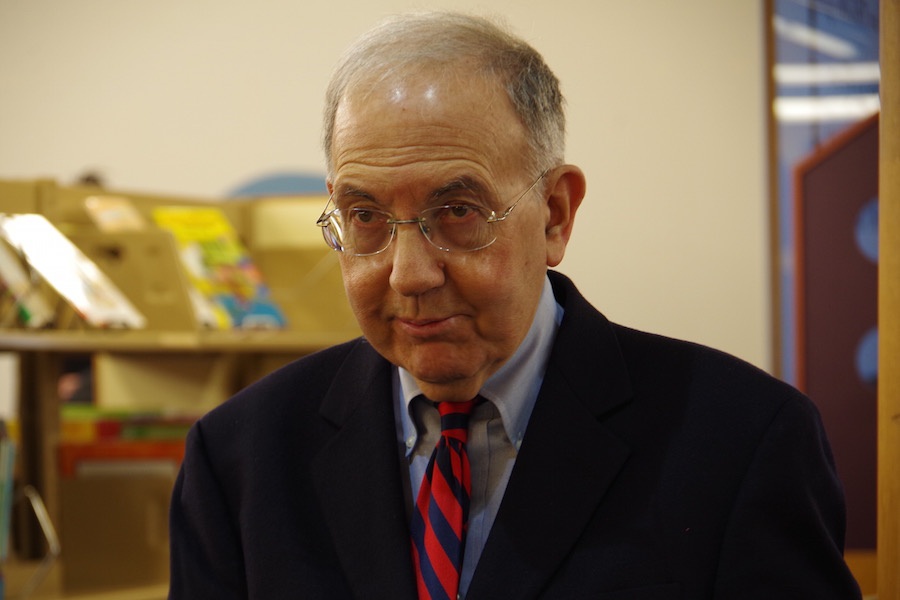 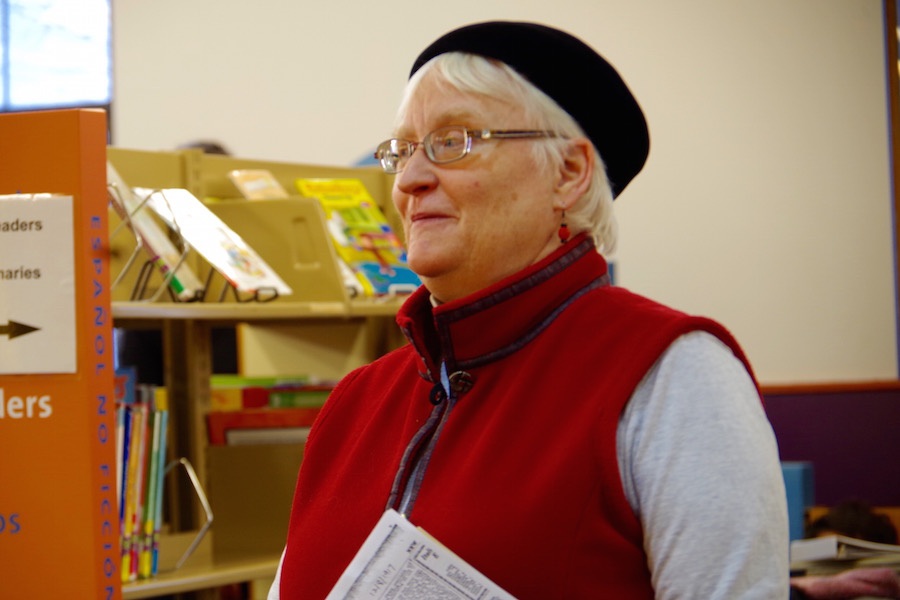 “We can think of this as a paradise reimagined,” said NHFPL Board President Michael Morand, noting that it was also poet John Milton’s birthday. Behind him, large flakes of snow fell softly onto Grand Avenue. “It’s a good day for free speech.” 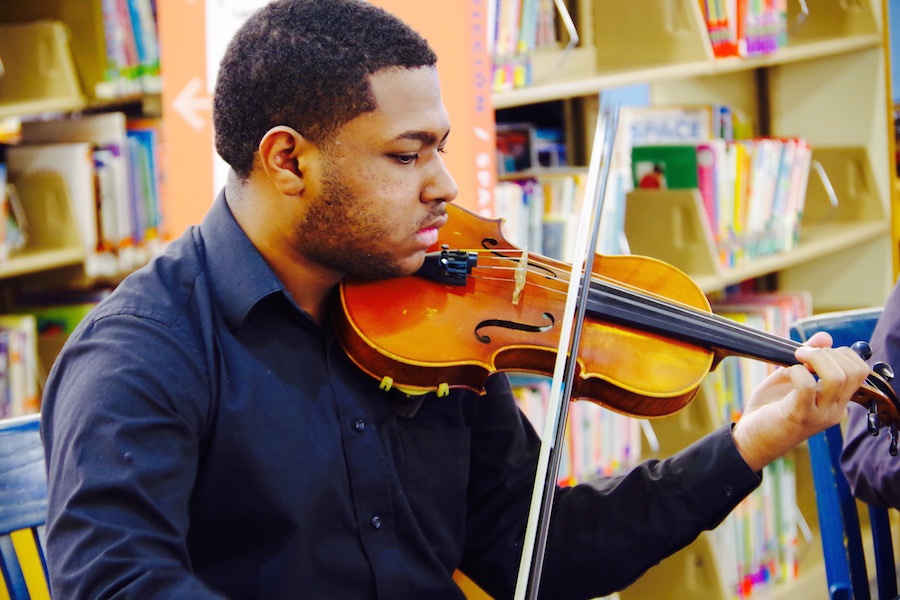 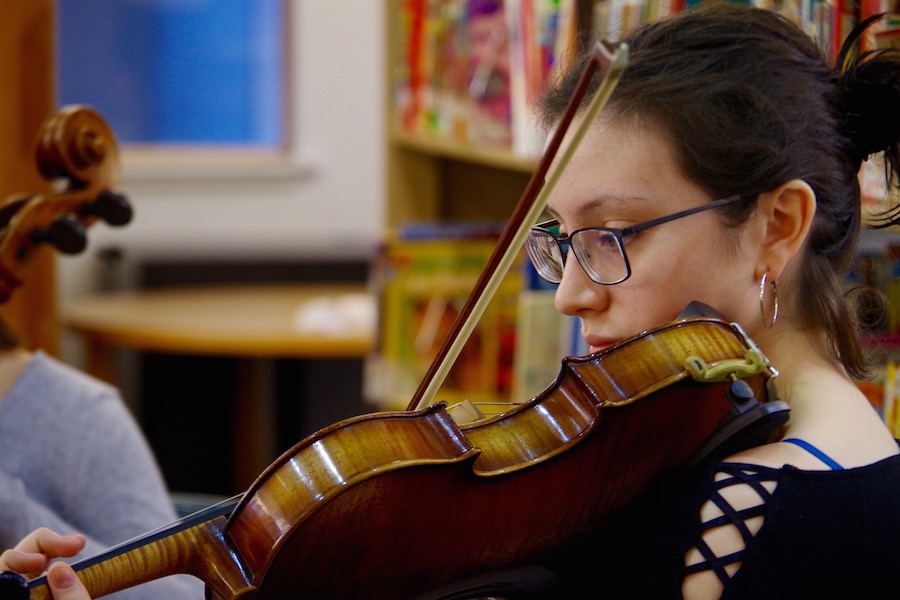 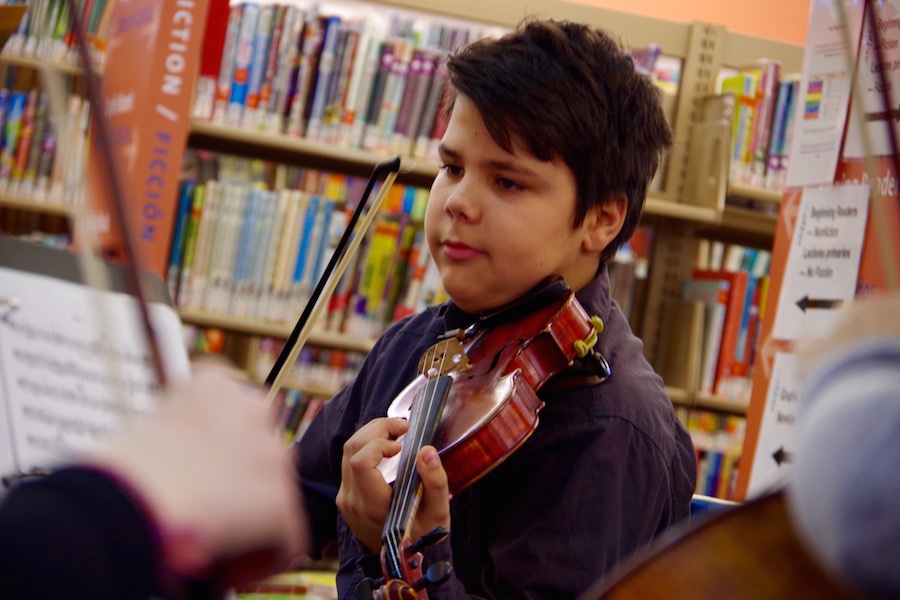 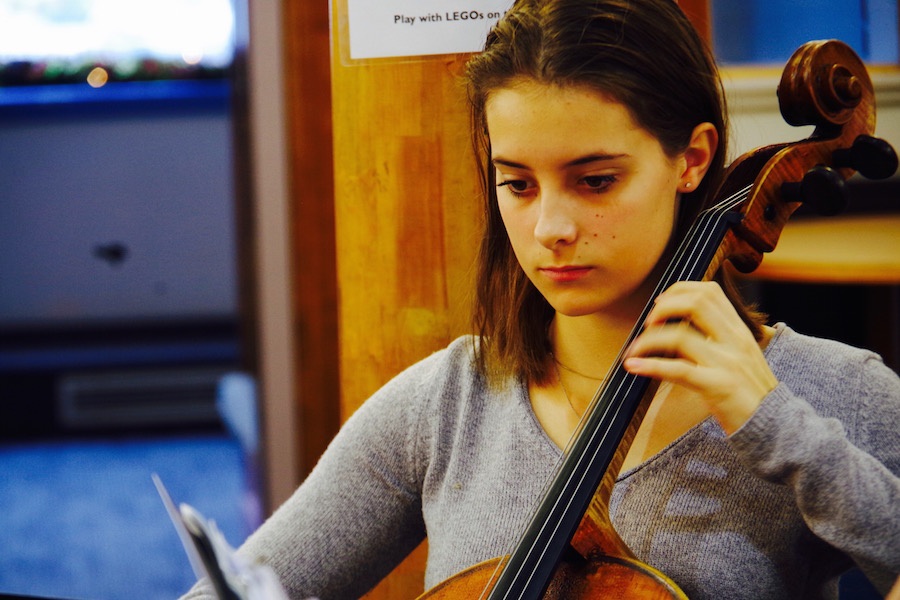 Free speech, and free music. After Morand lauded the library for its first hundred years, Music Haven students launched into a Christmas-themed medley, Coldplay’s “When I Ruled The World,” Béla Bartók’s “Romanian Folk Dances” and Bach’s “Brandenburg Concerto No. 3” all floating over the space. The centennial’s mini-concert marks a milestone for the students as well: It’s one of the last times they’ll play together as a group before member Noel Mitchell graduates next spring.

Others came forward with their memories of the library. Raised on Fair Haven’s Wolcott Street, State Sen. Martin Looney recalled coming to the library after school at St. Rose of Lima, so deeply engrossed in his books that he missed dinnertime more than once. Starting in the fourth grade, he would make the library part of his trek home, guided to biographies of George Washington, Andrew Jackson, Babe Ruth and Lou Gehrig by a librarian he recalled as a “Mrs. Johnson.”

“I remember the great world of books that was open to me here and the kindliness of the librarians who were always happy to see a child who was learning and interested in exploring things and having curiosity,” he said. “It was then, 60 years ago, and is now, a wonderful place. A wonderful resource in our community for people of all ages.”

“On this hundredth anniversary of Fair Haven library, let’s all look forward to the next 100 years,” he added. 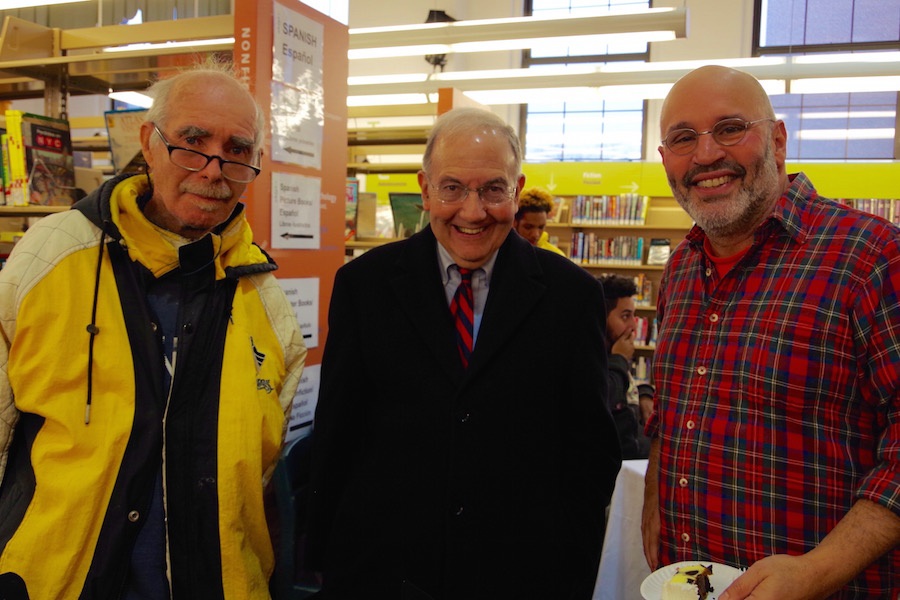 His memories resonated with lifetime Fair Havener David Caron, who grew up on Chatham Street and now lives in Fair Haven’s River Run apartments. He recalled walking to the library every day after school, picking up knowledge that his teachers at St. Francis Catholic School (now St. Francis & St. Rose, on Ferry Street) seemed to have left out of the day’s lessons.

For instance, a book report on Thirty Seconds Over Tokyo, a memoir on the Doolittle Raid on Tokyo. He wasn’t learning about that in school, he said. In the library, he could curl up with as much fiction and reference as his young mind could handle. He said he still comes Mondays without fail, to read the Sunday edition of the New York Times from cover to cover.

“It was—and is— always a refuge, to come here,” he said “The public library had more info than you could get from going to Catholic school.” 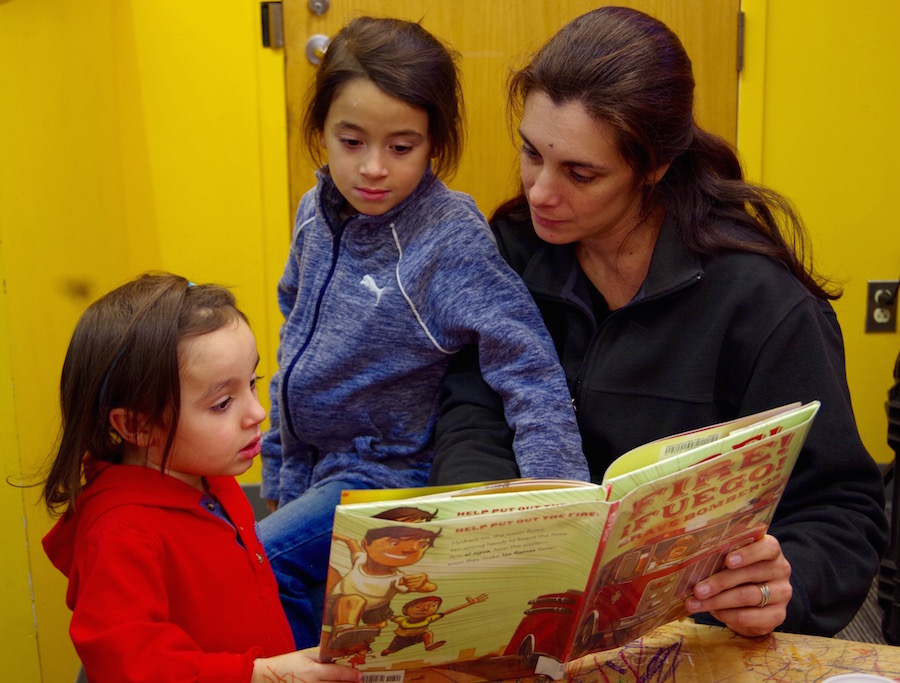 Other memories were more recent. Raised in Fair Haven, Lee Cruz recalled jogging up the library’s grand front steps when the entrance was still on Grand Avenue, and not on the side of the building. Now, he and his wife Sarah Miller come in at that side entrance, walk up a small set of steps, and find the shelves stacked with bilingual books that they can read to their two boys.

Growing Entrepreneurs Xavier Hernandez and Brianna Chance spoke to attendees about the library’s garden, passing out veggie-themed temporary tattoos, carrot slices and husk cherries as they showed off an old tortoise shell, and fielded questions about the garden. Attendees milled around, perusing titles like Turtles All The Way Down and waiting in a small line to greet Looney and share a few memories of their own with him. 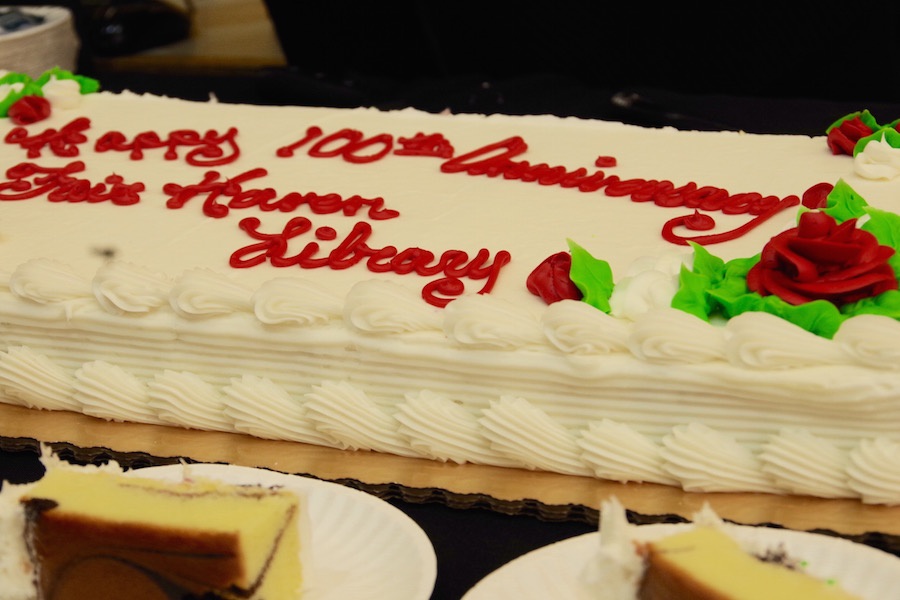 This next century—or next decade—may bring another round of renovations, said Brogan. As librarians Ashley Sklar and Lauren Bisio prepared to cut a cake, Brogan told attendees that the NHFPL has submitted a ten-year-capital facilities plan to the Board of Alders, and is hopeful that it will be able to restore some of that original architecture. In the FY2018 budget, more immediate needs included $225,000 for HVAC and elevator rehab at the Fair Haven Library.

“Both units are 20+ years and have maxed out service life,” her submitted proposal read.

“I would be thrilled if we could rebuild” the original entrance, she said. She added that she knows there are renovations the building badly needs, as both the Ives and Stetson branches get much-needed updates. But she’s not counting on it, she said. Not in the near future, at least.