'The Chosen' Choose To Play It Safe 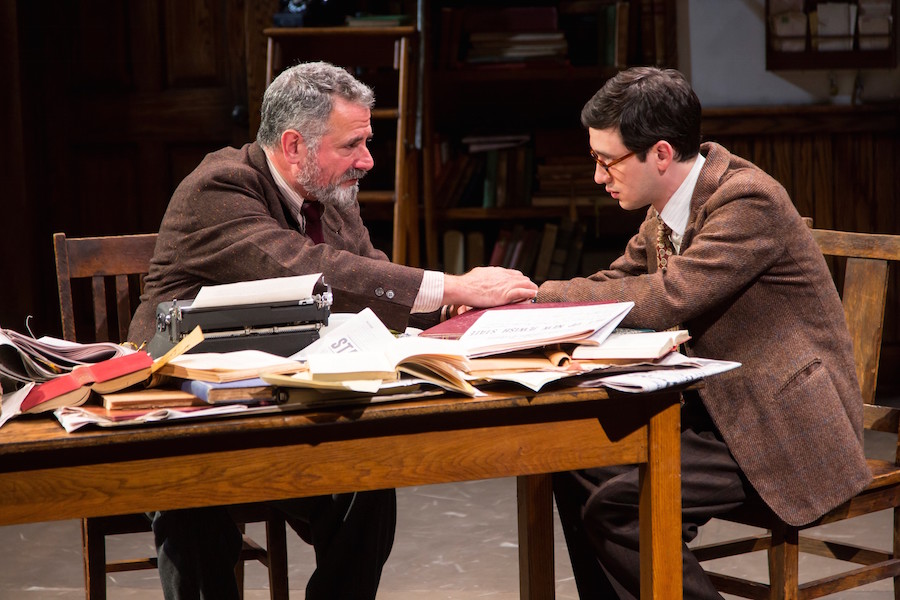 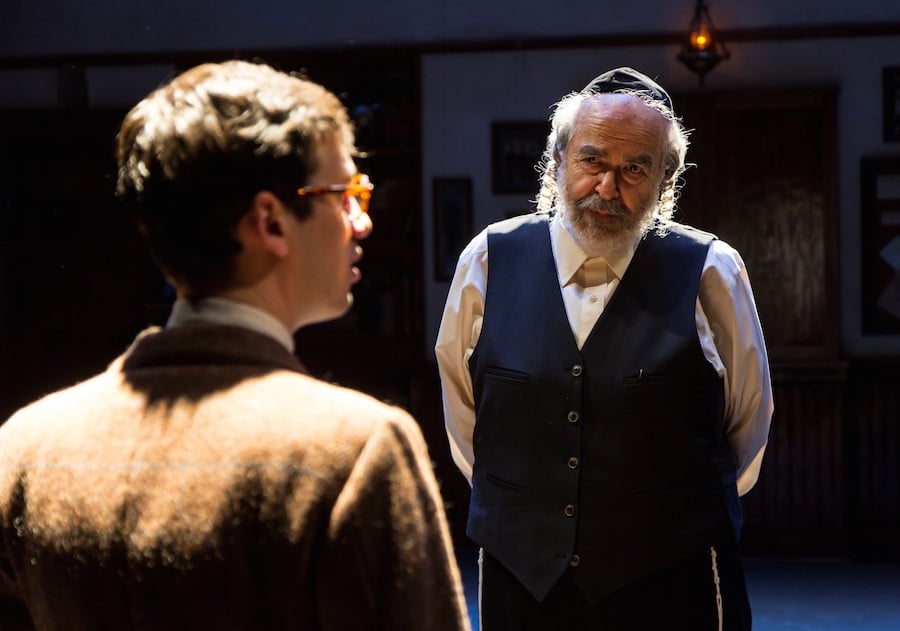 There’s this thing in Judaism. The text says one thing, but it also says another. The translation for a word is best in the old context, but the new one has its merits too.

Elu v'elu divrei elohim chayim. These and also those are the words of the living God. It’s not just that they can coexist. It’s that they must.

That’s the thick webbing in whichThe Chosen finds itself on Long Wharf Theatre’s main stage, where it is playing through Dec. 17. Adapted by Aaron Posner from the novel by Chaim Potok, it is a thoughtful meditation on midcentury American Jewry—and a story that is at once about fathers and sons, fathers and fathers, unlikely male friendships, and making the choice to find your faith, or let it go.  Or, to let it go after finding it. 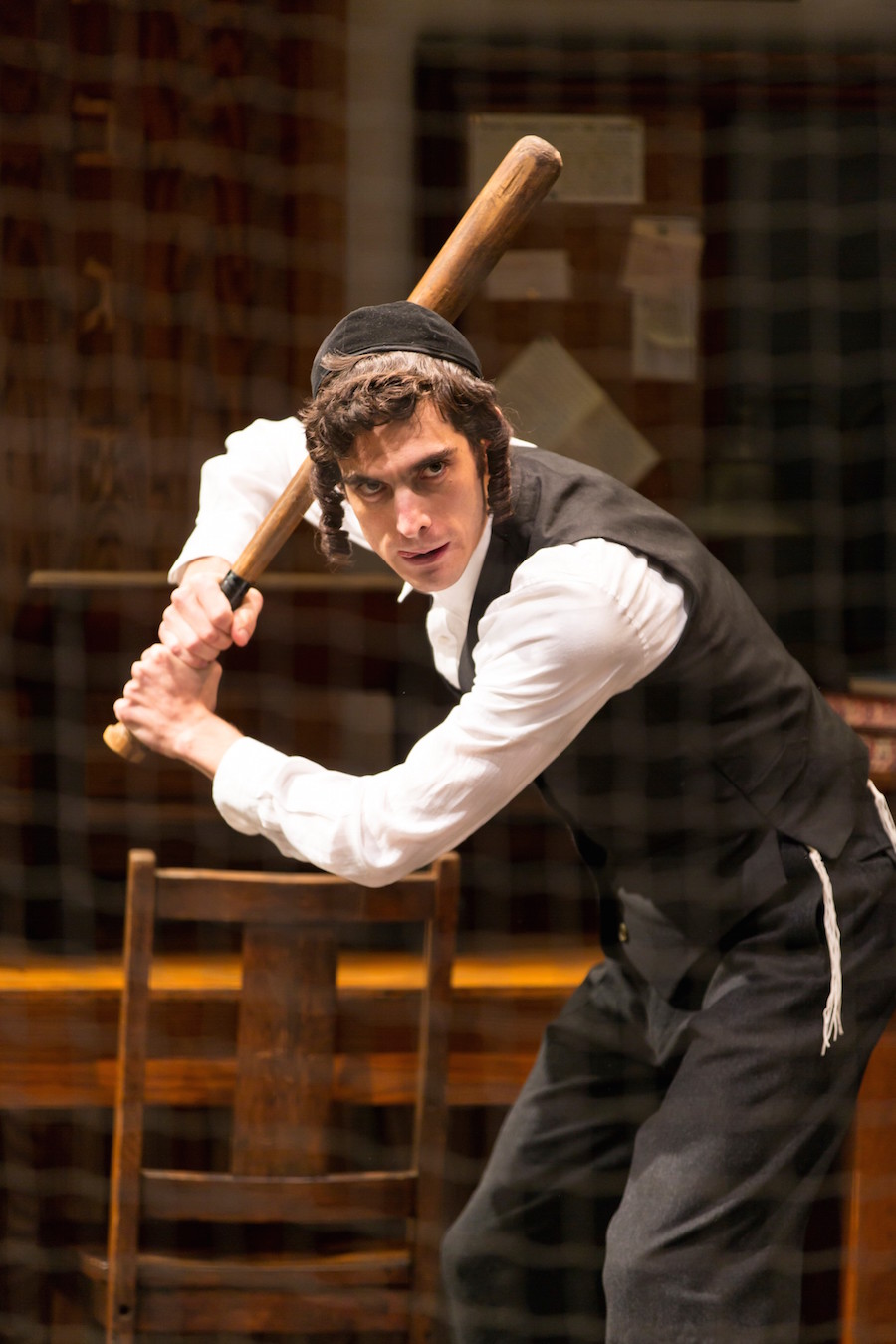 The play opens on the year 1944, in a Brooklyn that is at once very different and very much the same as it is today. On a baseball diamond—because really, what could be more American?—Reuven Malter comes face-to-face with Danny Saunders, a rival whose father is the Reb or Tzaddik at a nearby schul. Malter’s own father is writer and Talmudic scholar David Malter, whose brilliance is outshone only by his stance far to the left of center. Which is not, we learn, always the right side of history.

They are a pair of paradoxes: Orthodox versus Hasid, short-sporting versus fully covered and capped, bubbly versus mechanical, Zionist versus not. In Saunders’ eye, Reuven Malter is an apikoros—a skeptic. a less-than-true believer. So it is not a great surprise when Danny swings at a hard pitch, which goes right for Reuven’s eye. No surprise, either, that he doesn’t miss.

The injury marks the beginning of an unlikely friendship for the boys, a chance for them to learn about whole other worlds that live inside one faith. Together, they see each other through major life moments, from learning about the Holocaust’s magnitude to choosing their respective courses of study.

There’s so much that the play hits right on the nose. As Danny Saunders, Ben Edelman is outstanding, becoming the straight-edged, near idiot savant that his character demands. Edelman summons a quiet and unexpected strength—no task is too challenging, or too risky, for Danny. His face, and not his lines, carry this communication: It contorts, it washes with relief, it simmers with a red-hot contempt.

Face first, he dives into secular and scientific books, which are forbidden to him. In a way that is as cute as it is inspiring, he devours the knowledge within and isn’t sure where to put it. As we watch him wind ravenously around Crime and Punishment to works by Sigmund Freud, we find ourselves rooting for him to find a world outside of Hasidism, but also (and maybe surprisingly) rooting for the world that made him who he is.

So too with George Guidall, who plays Reb Saunders. Perhaps more interesting than Reuven’s jocular relationship with his father is the Reb’s with Danny, as the two orbit each other like speechless, cool planets. It’s a solitude filled with quiet pain and compassion, reaching even the recesses of Guidall’s deep voice when he explains its root cause. But it is also one that Posner has set up with great complexities. If Reb Saunders is teaching his son to listen to the silence, he’s teaching us too.

That’s not to say Reuven’s paternal relationship isn’t interesting—it’s just more expected, which we learn comes with its own problems. Steven Skybell gives a fiery performance as David Malter, both crippled and made pragmatic as the news of the Holocaust grows darker and darker, and he fixates on the idea of a true Jewish homeland.

He, like Edelman, is an actor for whom performance is a full-body sport: he throws himself into each sequence (sometimes it’s a little schmaltzy, but mostly it’s admirable) with great gusto, and has a certain way of tugging the heartstrings while being an insistent, self-righteous jerk. As Reuven, Max Wolkowitz shoulders this great passion, simultaneously lifted up on and condemned to loneliness by his father’s beliefs.

Even if this play is meant to be a time capsule, there’s a timeliness there. Not just in the messy, complicated nexus of father-son and father-father relationships, but in the search to find and save American Jewry from itself. Or its many selves. Set during and after WWII, certain markers aren’t interchangeable—the slaughter of six million Jews not least among them. But a conversation about Zionism and its discontents strikes hard, making the cases for and against a Jewish homeland just as President Donald Trump adds his Jerusalem decision to a complicated, delicate and volatile mix.

In many ways, end-of-play Reuven is the current millennial’s grandfather, who is watching as tradition ebbs and flows, as the Orthodox movement expands and the reform movement (which is a small but notable mention in the show) grows smaller. The year is 1944 (and then 1945, and then ultimately 1950), but scenes of Reuven and Danny feel like they could be from this year, on a baseball diamond in Ramapo or Brooklyn. Their struggles, as Jews and as humans, are not not our struggles. They make choices. They flip-flop on text and history, trying to find the spot where the two rise up to meet each other. These and also those are correct. 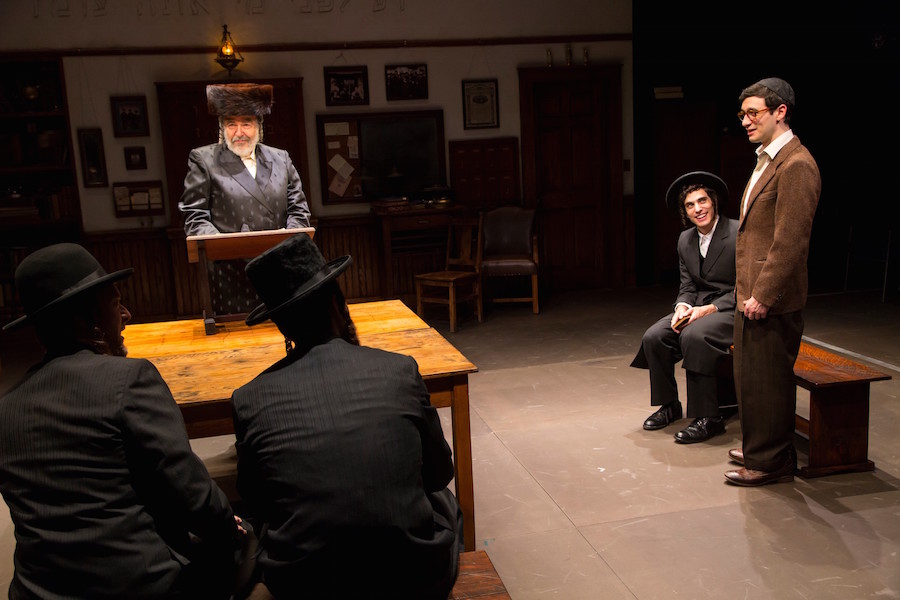 If there’s one big snag in this tallis of a show, it’s that director Gordon Edelstein has chosen not to trust his audience to make any of those connections for themselves. In this adaptation, Reuven unspools narration between scenes, a device that is initially distracting, then gratuitous, then suffocates the show. It doesn’t just assume viewers can’t grasp historical context—it insists they can’t. It’s your guests arriving to Shabbat with Mogen David instead of the fancy Kosher wine you asked for.

It’s a clammy sort of handholding that exposes the show’s fault lines, perfunctory attempts at gender commentary (Please! Just make a show about Jewish male homosociality a show about Jewish male homosociality!), and narrative inconsistencies. For reasons that remain unexplained, there is a woman who appears for no more than five seconds, as students are feting Reuven for his father’s strong Zionist stance. But she never comes back, and she doesn't belong there in the first place--because she wouldn’t have attended the fictitious Hirsch Seminary and College. In 1950, not even New York's Yeshiva had founded Stern College for Women (that came four years later). The Jewish Theological Seminary didn't admit women until October 1983.

There are little crumbs like this all over the stage, and once you see them you can’t unsee them.  At one point, Reuven suggests to Danny that maybe his life would fall into place if he found a girlfriend, an device used for Danny to drop knowledge about arranged marriages in Hasidic Judaism. It’s not clear what dudebro cred the script is trying to achieve—but we are pulled violently out of the play, left with the trope that maybe Danny will work out a major life decision if he could just get laid first.

Or another, as Reuven announces his path of study to his father, and his father wipes his eyes. “I just wish … I just wish your mother…” His voice cracks as he trails off.

The thing is, we haven’t heard about Reuven’s mother for the entire show, although her presence is palpable in the awkward pauses, the unkempt house and stress-related heart attacks that threaten to derail David. We know she has left the world too soon without it ever having to be said; like Danny, we’ve listened to the silence. So when the mention—acted with considerable schmaltz—does come up, it feels out of place.

And so The Chosen is a little like a very long prayer. The words are there. We learn them inside out; they become a part of our daily fabric, a thing to live by. But sometimes, in charging through them, we forget to come up for air. To choose trust, blindly, in the interpreter of the text.