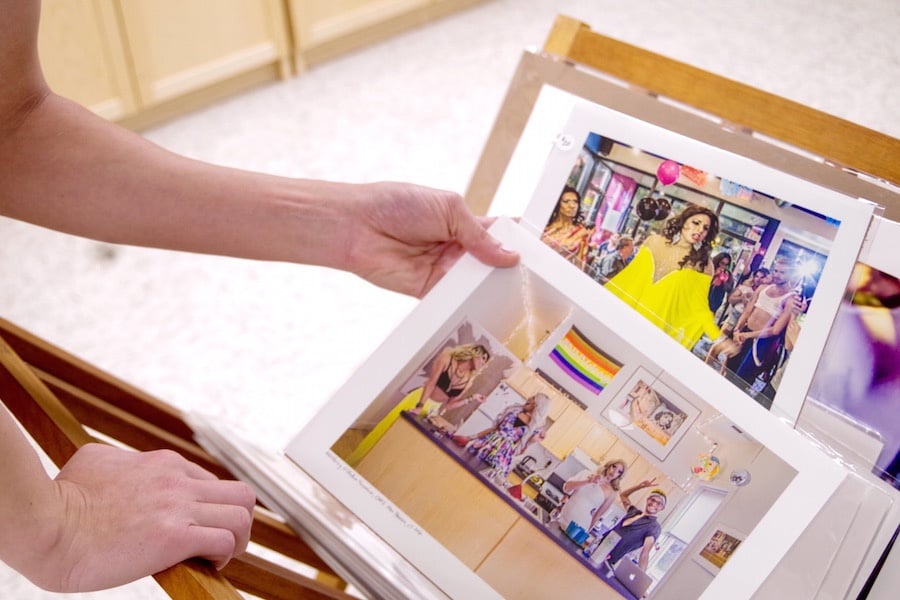 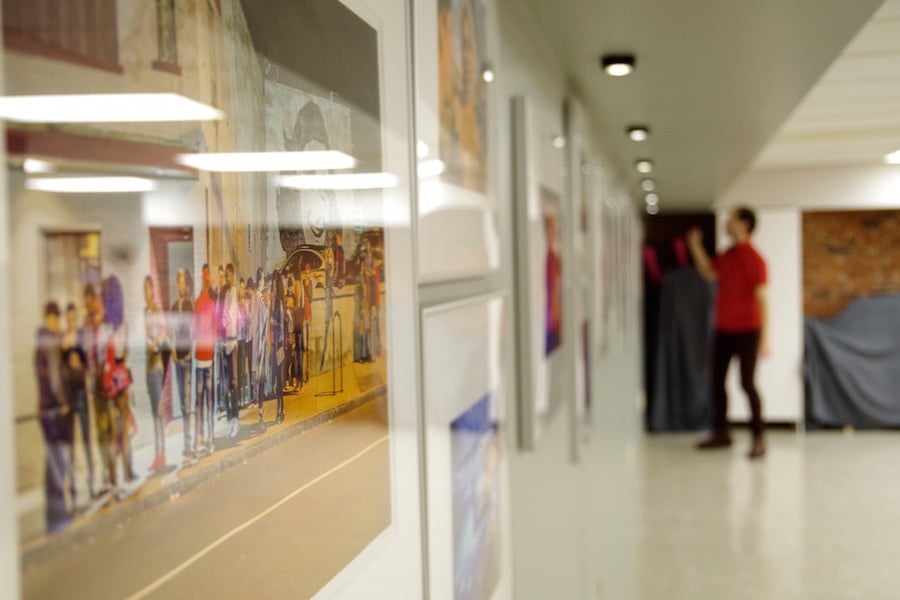 The gallery is now open! Friday, NHPC Director Patrick Dunn released an open call for proposals for six exhibitions in 2018, open to multimedia LGBTQ+ artists from across Connecticut. November, which is Trans Awareness Month, is open only to Transgender artists. The deadline for submissions is Jan. 15. Lucy Gellman Photos.

On the walls of the New Haven Pride Center (NHPC), something was starting to pulse and grow. From one end of the room, Kiki Lucia was mid-makeup before a mirror, tongue curling and frozen between her teeth. In another,  Madison Sapphire Duchannes was winding her way around a stripper pole, torso clinched in a rush of red silk. Across the wide room, Malaya Love Nations marched forward, hydrant-red tresses streaming behind her.

The Orange Street center hasn’t started hosting drag shows. Not yet, at least. Instead, it has just opened the city’s first LGBTQ+ gallery in its large basement office, which doubles as a rec room, space for support groups, meetings, and movie screenings. This month, the inaugural exhibition fetes Daniel Eugene’s #NHVDrag photo series and book, a nod to Eugene’s work with the center in the lead up to the book, and during New Haven Pride Weekend and City-Wide Open Studios. 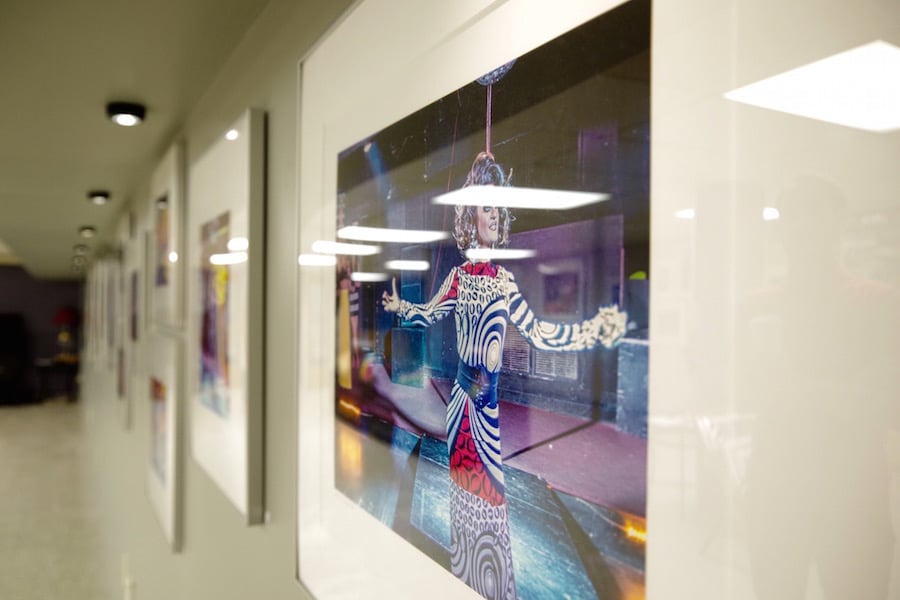 Starting next year, shows will be hand-picked by a jury of five community members, filling the space for six- to eight-week runs. On Friday, NHPC Director Patrick Dunn released an open call for proposals for six exhibitions in 2018, open to multimedia LGBTQ+ artists from across Connecticut. November, which is Trans Awareness Month, is open only to Transgender artists. The deadline for submissions is Jan. 15.

“There are some incredible queer people creating art in Connecticut,” he added. He referenced Bridgeport Pride, which the city’s LGBTQ+ community often uses as a chance to celebrate its 30 to 35 exhibiting queer artists. “It’s not that it’s not being recognized or being ignored, but there may not be enough space for all of it. So why not create new spaces for it?”

The space comes from a need that Dunn observed both while working for the International Festival of Arts & Ideas and as an out, queer man in the city. In New Haven, there aren’t any exhibition spaces that specifically cater to queer artists, nor are there many gallery shows dedicated to LGBTQ+ rights, or the needs of those community members. Dunn saw an in, and he took it.

“I think that the idea that there’s a space that does feature queer art is important for the landscape of New Haven,” he said. “New Haven is one of the most important queer cities in New England. We have incredible queer spaces, we have multiple queer venues that cater specifically to the queer community, we have a vibrant drag scene, we have politicians and city officials that embrace our queer community as a bonus. So why not also have essentially what is a queer gallery, it just happens to be a community center?”

Dunn said it’s also important to him that the artwork not operate in a silo. Free, community-based programming will accompany each exhibition, to “really use art to tell stories.” In the case of Eugene’s exhibition, which runs through the end of January, the center is holding drag makeup workshops, series of films starring drag queen Divine, showing of Paris is Burning and lecture on the history of drag. 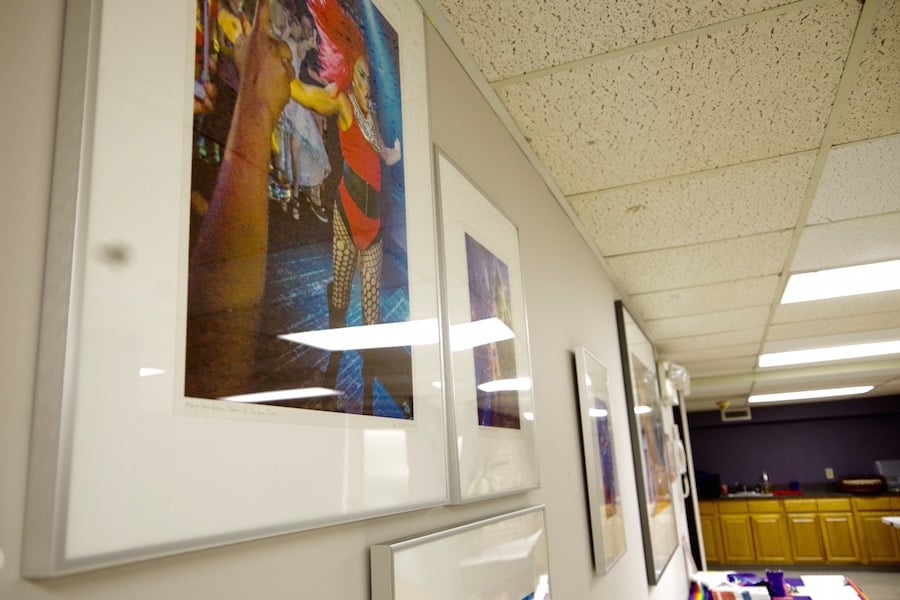 “I’m excited that the center is moving to a place where we’re able to participate in the arts and culture landscape of New Haven,” Dunn said. “As I look ahead two years, five years … I see the center being embedded in every aspect of New Haven life.”

“It’s really important for me that we have our safety, in our safe space that has no windows, where people can come anonymously. But it’s just as important for me to have the visibility of the center, for the community at large, and be a place that celebrates our community.”

Starting in January, the NHPC will have officially gallery hours, where attendees are able to check out books and look at and purchase artwork. To find out more, check out the center’s new website.