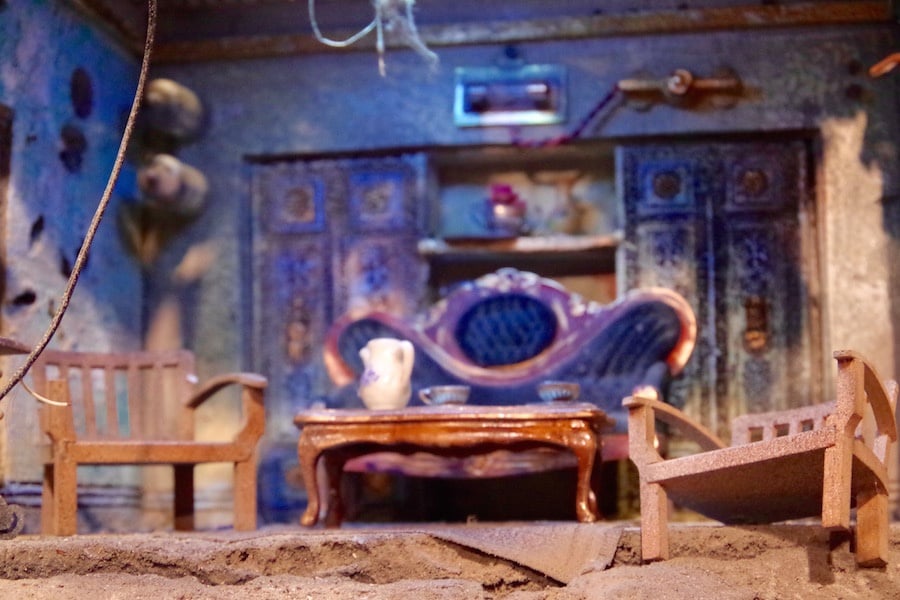 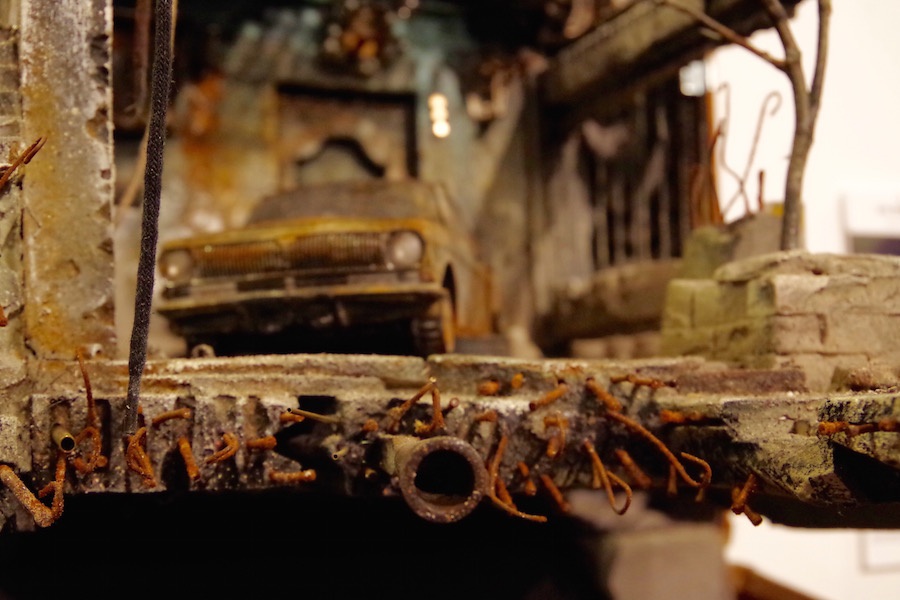 A detail of Um Shaham's miniature home, with exposed piping and wire filaments, and a singed car in the background. Lucy Gellman Photo.

Um Shaham (the mother of Shaham) was polishing a car in the driveway when the years of tragedy began. First, flames sprang from a second-story room where her infant daughter slept, just missing the girl but leaving her and her son with second and third degree burns. Then the fire devoured everything else in their path, taking the car in a burst of orange and red.

Then the war came to her front door. Just months after the fire, her husband was shot dead from a stray bullet, his taxi returned to her soaked in his blood. And she was on her way, gradually, to fleeing her home country to stay alive. 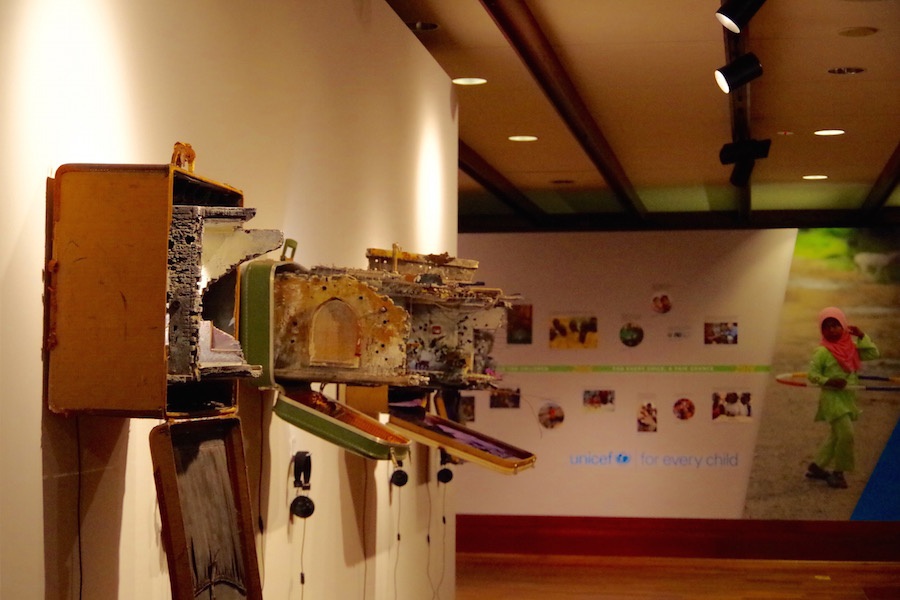 One side of Unpacked: Refugee Baggage , which lives inside a permanent exhibition at the UNICEF House. Hafez said that a wall was put up in the space especially for the show. Lucy Gellman Photo.

Um Shaham is a refugee from Mosul, Iraq, who arrived in New Haven in 2015. With nine others, her story is part of a retooled and revisited Unpacked: Refugee Baggage, now open to the public through Jan. 3 at UNICEF’s Danny Kaye Visitors Center in Manhattan.

UNICEF will hold an opening reception on Monday Dec. 18, to correspond with International Migrants Day at the United Nations. The show is nestled within a permanent exhibition on UNICEF’s mission and work around the world.

Unpacked: Refugee Baggage marks an expanding collaboration among artist and architect Mohamad Hafez, writer, speaker and student Ahmed Badr, UNICEF and the International Organization for Migration (IOM). It is Hafez and Badr’s first show in New York, a start to what both hope will become a nationally touring exhibition.

But Unpacked: Refugee Baggage has its roots in New Haven, where it received funding from the Connecticut Office of the Arts, Wesleyan University’s Center for the Arts, and the Andrew W. Mellon Foundation earlier this year. It was in that first iteration, which ended in a week-long exhibition at Artspace New Haven, that a representative of IOM saw the show, and asked that it come to New York City. 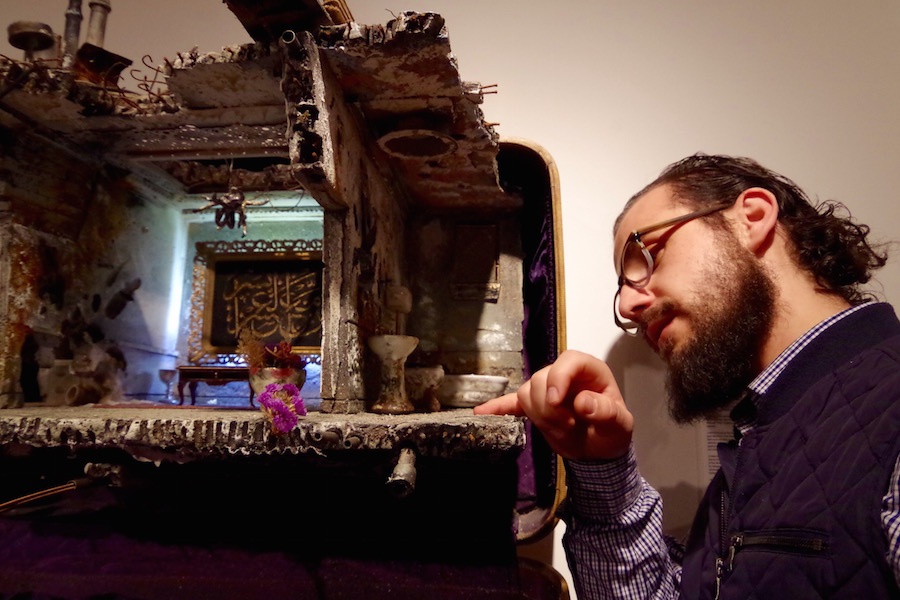 Before Monday's reception, Hafez took moments to examine each piece. Here, he pointd to where water should line the floor in Badr's miniature. Lucy Gellman Photo.

In those early stages, Hafez worked with Badr to record a series of interviews with refugees, asking them about their experience in their home countries, journey to the United States, and the struggles they have faced since arriving. When they met, Hafez said the two gelled immediately—Arabic speakers yanked out of their homelands, yearning for family. They are now brothers in craft and mission: 19 and 33, passing off light nugies (Hafez is the only person outside of Badr’s family allowed to touch his hair) and jokes in Arabic when they are not working.

Listening to each story, Hafez has sculpted small models of refugees' original homes, rendering in miniature the bombs that ripped through brick and plaster, destroyed plumbing systems, and forced families to evacuate for fear of their lives. There’s a personal angle: Models include his parents' home in Syria, from which they fled several years ago, and Badr’s childhood home in Iraq, nestled within the lush purple silk of an old suitcase.

“I want to invite people here—those that have spicy opinions about refugees, and are drawn in by the miniatures,” Hafez said. “I want them to come, and look at the miniatures, and listen [to the stories], and say, ‘Wait a sec, I just listened to a refugee. And their struggles are not too different from my struggles.’ It’s a way to humanize. I really hope people step up and really see the work.”

A detail from the story of Ayman and Ghena, two siblings from Homs, Syria. The text reads that "Ayman recalls his mother leaving a coffee cup on the living room table. He made a mental note to clean it up upon their expected return after four or five days. It has been six years since they left the house and that coffee cup." Lucy Gellman Photo.

“It’s a blessing to have skills to tell people’s stories through art,” he added. “You don’t just walk into one of these interviews and say, ‘Spill the beans.’ It takes a certain amount of trust and mutual respect. I’m so honored … Humanizing is a science in itself, that I’m continuing to learn. It is a blessing from God.”

He said the work feels more pressing now than it did in September, as deportations continue, the Supreme Court has allowed Donald Trump’s travel ban on migrants from Chad, Iran, Libya, North Korea, Somalia, Syria, Venezuela and Yemen to take effect, and Trump has pushed Jerusalem as the capital of Israel.

In return, Hafez has taken time to return to the pieces, a sort of homecoming from his full-time job as an architect. In each—“they become my babies!” he exclaimed mid-interview—he has touched up details, readjusted tiny light fixtures, checked on fabric that sags or shifts. They are striking in their detail and nuance: Barbie-sized wiring and delicate tea cups, overturned wooden furniture, doors etched with blue and gold paint. Everywhere, little plants and flowers spring up, little symbols of resilience, regrowth and return in hostile environments. 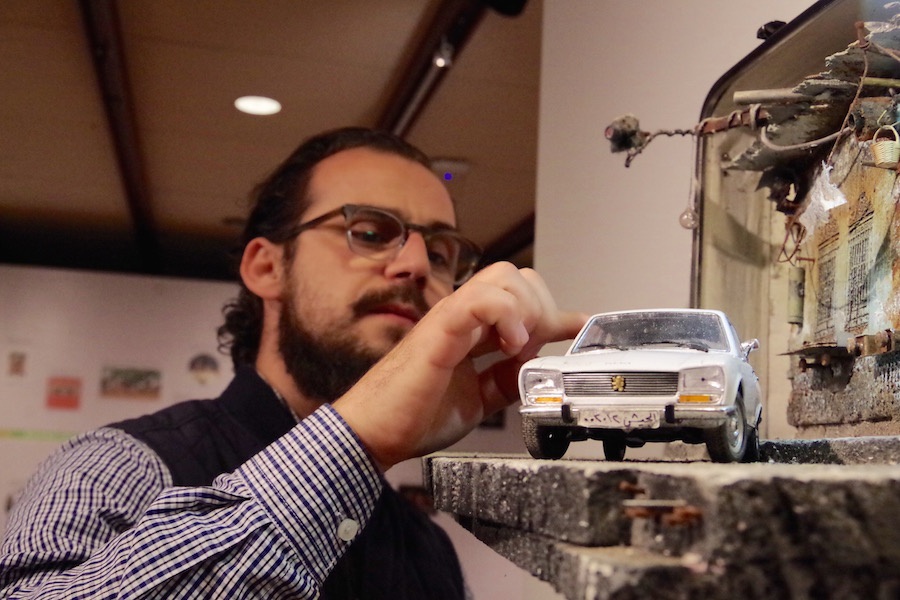 Hafez: "Any Syrian can tell you about this car. In the time of the Revolution, this car was the last thing you wanted parked in front of your house." Lucy Gellman Photo.

It’s that level of detail and nuance that keeps the eye coming back, and filling in pieces of wall and doorway that have been blown away. In one, a miniature white Peugeot 504 stands in front of now-refugee Amjad’s home, signifying that the Syrian secret police are near, and likely to strike. In another, a gilded cross still sits untouched on a wall, witness to both destruction and its owner’s unwavering Christian faith. In yet another, at the Badr home, a dainty porcelain tub is covered in brown dust, and speckles of water cover the floor.

“When the bomb ripped through the house, some water pipes must have burst,” said Hafez, taking in the pockmarked walls, lush rug and exposed piping. “I wanted to show that.”

Many of the suitcases are from second generation Jewish Americans, who have held onto the luggage with which their parents left Europe and came to the United States so many years ago. It feels timely, Hafez said, to have “yesterday’s immigrants helping to tell the stories of today’s immigrants.” 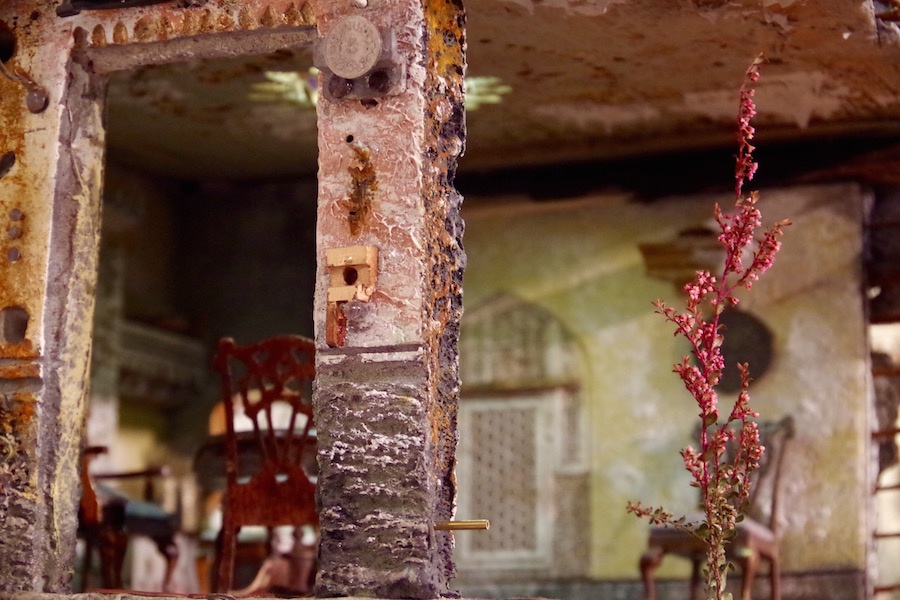 A detail from the home of Joseph, who fled the Democratic Republic of Congo. Lucy Gellman Photo.

“It’s all part of trying to engage the wider public in a conversation about migration and refugees, and what that means for our world and society,” said UNICEF Communications Director and Spokesperson Dan Thomas. “They [people] see the big numbers, they hear the sort of overwhelming numbers coming from one country or another, and they—well, everybody’s aware of the fear and the xenophobia that that potentially generates.”

“But at the end of the day, these are individual people who are leaving their homes for perfectly valid reasons, and this is a way of hearing their stories, and understanding they’re just like us. If we were in their situation, we’d be moving too. If we were just a more understanding and a bit more open-minded about where people are coming from … that can only be a good thing. To remove the fear of the other.” 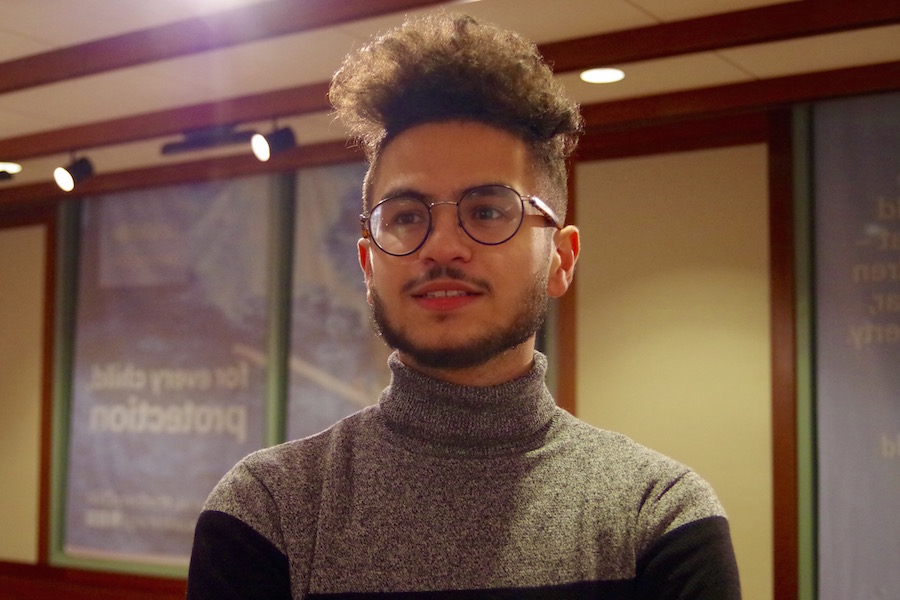 Thomas added that UNICEF’s engagement in the exhibition dovetails with its #ChildrenUprooted campaign, which seeks to bring attention to the 50 million uprooted refugee and migrant children around the world at any given time. Launched just over a year ago, it is part of the organization’s six-point agenda for action. That’s an agenda that both Badr and Hafez have gotten behind in the process of building Unpacked, in which they’ve talked to several families that have been torn apart by conflict.

“It’s a feeling of urgency, and it makes the work all the more necessary at this moment in time,” Badr said. “As more and more people try to dehumanize refugees and migrants by spreading the negative narrative, this exhibit comes in and says, ‘Hey, look. These are perspectives. These are possible narratives that you can consider.’”

They are not finished, Hafez was quick to add—he and Badr plan to spend the next two years collecting stories, and only “about 40 percent” of their material has made it into the current show. In that next two year period, they are also hoping that the message garners national interest and sponsorship.

Unpacked: Refugee Baggage is free and open to the public from Dec. 5 to Jan. 3 at the Danny Kaye Visitors Center of the UNICEF House, 3 United Nations Plaza, New York, New York. The center is open Monday through Friday, 9 a.m. to 5:30 p.m.