“You Gotta Know What You’re Doing” 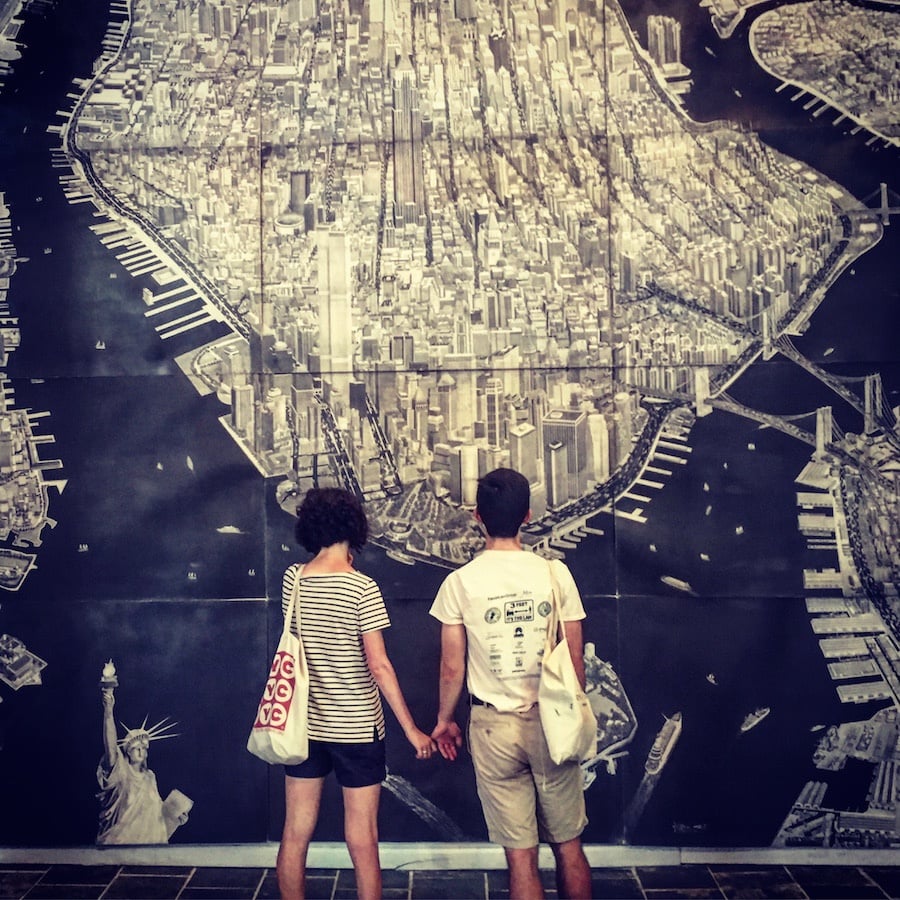 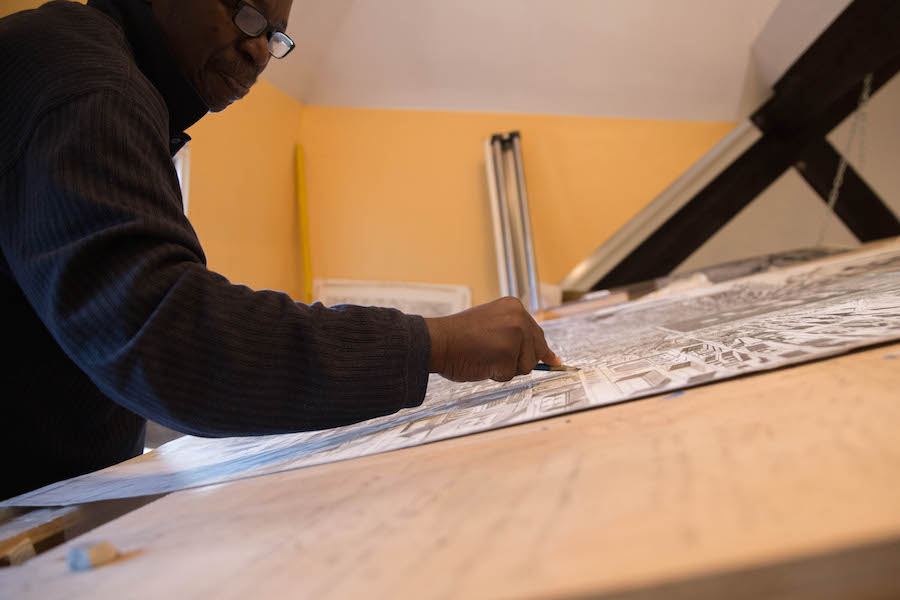 Straight down New Haven’s Congress Avenue, then down a tree-lined street, then down a fat asphalt driveway, that’s where you’ll find the Hill Museum of Arts.

It’s there that Gregory “Krikko" Obbott has decided to display his life’s work, a series of giant pencil cityscapes that line the walls. Rather than finding a museum to show the pieces, Obbott—who prefers to go by Krikko—decided to build his own. For that, he’s been able to feature not just his pencil drawings, but works from the artistic journey that led to them.

The tour starts in his lobby, on the other side of a large, creaky front door with pillars on both sides. Bright white columns rise to the third floor rafters and warm light streams in, illuminating the drawings. Guests find themselves face-to-face with The Super Big Apple, an aerial view of New York City that measures 20 x 15 feet. In it, New York City stands as it was in the 1990s, with Manhattan dipping out into the viewer’s field of vision.

Landmarks crowd the space: the Empire State building and heavy bridges, with Lady Liberty saluting her viewers from the drawing’s right. Krikko spent years (and 2,496 pencils, he said) working on the piece, which includes 10,000 buildings and 150,000 windows.

The Super Big Apple is just Krikko’s starting place. Across the room hangs a scene of New Haven, measuring 20 x 10 feet. It too is incredibly detailed, with tiny people walking down Crown, College and Elm Streets. Itty bitty students hoist up their backpacks and businesspeople their satchels and briefcases. There are scenes that still ring true, like a hot dog vendor parked in front of the courthouse on Elm Street.

In creating the museum, Krikko said he sought a space large enough to both hang his drawings and display his multimedia talents. He’s also a skilled saxophonist—he lists Coltrane as an influence and talks frequently about his love for abstract music. Some days as he works or leads tour groups through the museum, tracks from an original jazz album that he recorded with his friends play from a speaker up on the third floor.

Krikko drew his first cityscape as part of a school project in 1980. Originally from Surulere, Nigeria, he moved to America in 1974 to study architecture at University of Southwestern Louisiana (now known as the University of Louisiana at Lafayette).

There, he learned techniques that he still uses today. He makes schematics to plan out his drawings and only works on small sections of the drawing at a time. Since his first drawing, his work has only grown in size and popularity. His larger-than-life drawings are made famous by widely distributed prints, shrunk down to postcard size. 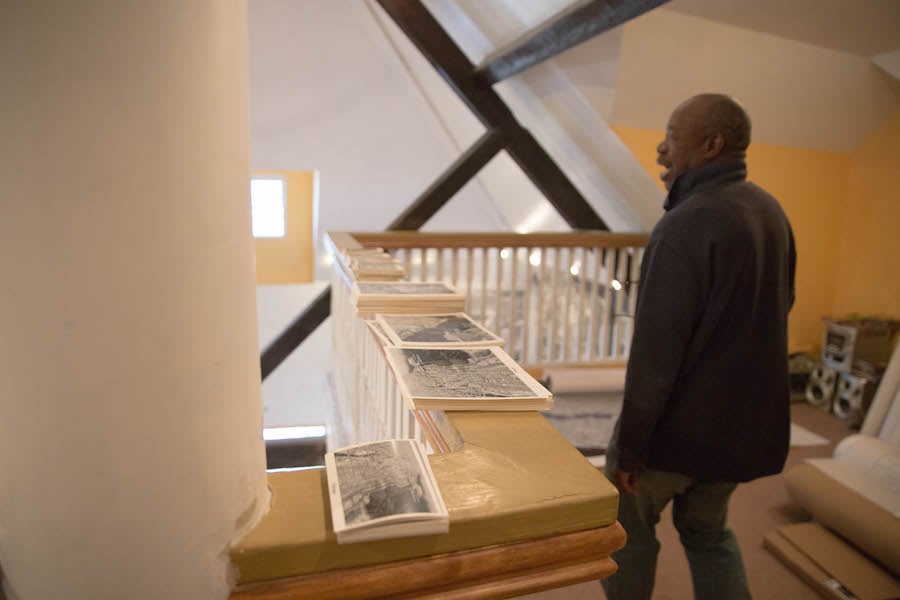 His background in architecture isn’t just useful for drawings, he said in a recent interview at his museum. He also designed and restored the museum in 2013. He said that the choice to do so was personal: he has lived in the Hill neighborhood for over 20 years, close to and in the museum’s digs on West Street. When he started looking for a place to hang his drawings, he didn’t have to look far to find the right location.

A then-vacant carriage house on West Street was protected by the city for it’s historical architecture. Residential developers looking to build apartments had been turned down, said Krikko—“So I came up with the concept” to do something else with it.

He reopened an expanded museum, with plans for a nearby garage, in stages between 2013 and 2015. The renovations were an undertaking: longtime friend and assistant Curtis Woods did the wiring and plumbing, and friends and neighbors helped with construction. In the next few years, he plans to open an animation studio in the empty garage out back for local kids to create and build art in.

He has a pre-rehearsed tour, ready for groups that enter the space. The first two stories of the three-story house are filled with Krikko’s art, mostly drawings of cities and buildings with a few portraits in the mix. The second floor houses a gift shop, a corner filled with postcards and prints of his drawings. 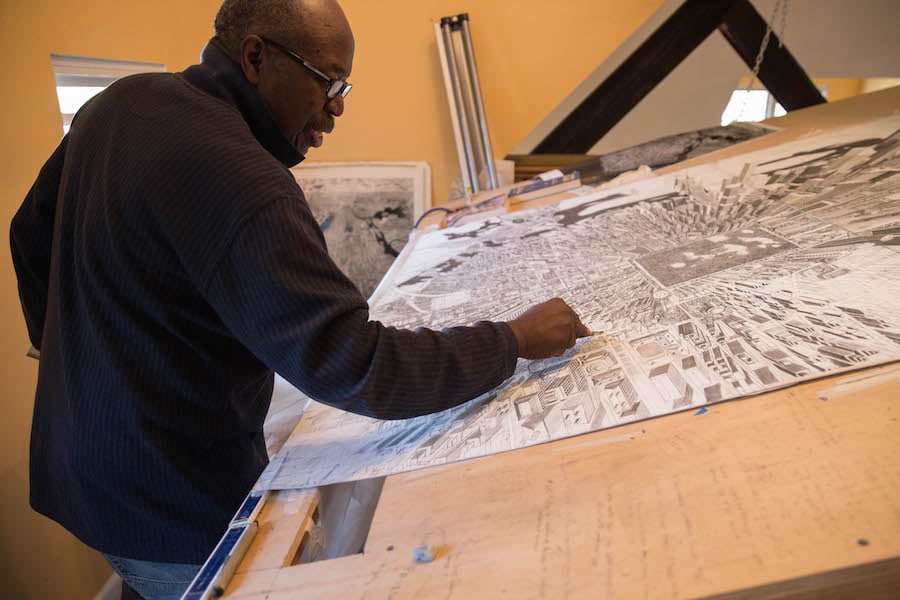 But it’s up on the third floor where Krikko spends most of his time; his studio and home are there. His decision to live in the space was motivated by his hunch, fed by decades of experience, that creativity may strike at any time.

“There’s no way you’re gonna live in the suburbs and come here and draw for a few hours,” he said in a recent interview. “You gotta draw at night. I was up at 2:30 last night drawing.”

From the across the open airspace on the third floor, he called to Woods, sitting in the stairwell below.

“Curtis! Ask him. Where do I sleep?,” Krikko said.

“Under his drawing!,” Wood shouted back.

That drawing, still nascent, is a new perspective of New York City. On the third floor, panels sit on a desk suspended by chains from the ceiling. Unlike his Super Big Apple, Krikko has shifted the perspective to sit above Central Park with the rest of the city shrinking in the distance.

At this workbench, the scale of Krikko’s work is broken down. The drawings are done in sections, on 60 x 40 inch pieces of four-ply paper. Next to the four sections on the table are tattered maps, frayed and retaped, and his collection of pencils.

On a recent tour of his desk, Krikko grew quiet, leaving the sounds of his shading and the recording of his jazz group to fill the silence. He was working on the Columbia University neighborhood, shading a section, rubbing the paper with a blending stump, a stick of tightly wrapped felt paper, and then glancing at the map before he repeated the process.

“It’s almost like you’re dancing, your hands have to move in rhythm,” he said. Only the tip of the Staedtler pencil touched the desk to avoid smudging. “Staedtler, Staedtler pencils. Staedtler is the best!”

The love is reciprocal: His work is featured on Staedtler’s advertisements and pencil packages. And that kind of expanded vision of his work, he said, dovetails with the expanded museum, and an equally expanded mission statement.

“I’m an artist, I couldn’t be that reserved, you know, otherwise you incubate creativity and energy,” he said. “You gotta come out of the box.”