A “World” Where Eco-Stewardship Meets Art 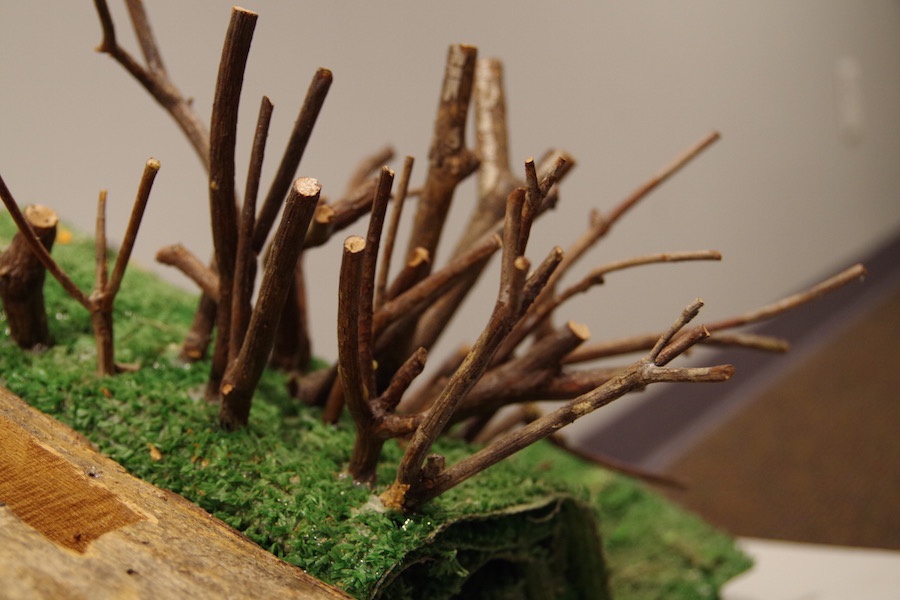 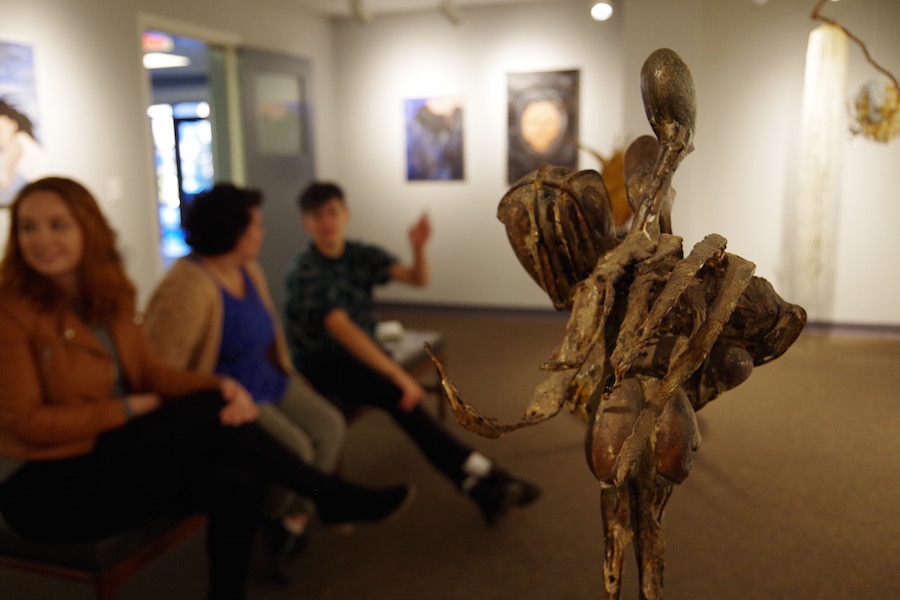 It’s not clear what, or who, she is the first time you catch her out of the corner of your eye. Maybe half-woman, half wilderness, with shoulders of emptied milkweed pods and a round, undulating behind. Maybe she is just on her way somewhere, cape billowing behind her, the wind whipping it as she walks. Maybe she is fertility personified, mid-stride and ready for takeoff.

Only one thing is certain. She—Joesph Saccio’s Great Striding Woman—is part of An Anthropogenic World, the newest collaboration between students, faculty and local artists at Albertus Magnus College. After opening quietly Monday evening, the show is on view at the college’s Margaret L. MacDonough Gallery through Friday. Admission is free and open to the public. 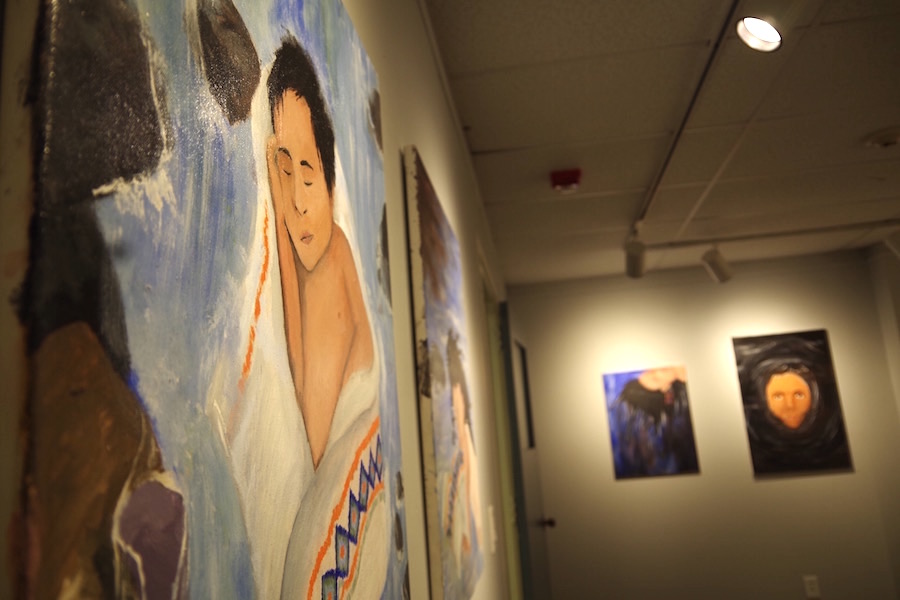 An Anthropogenic World begins in two places. The first is the college’s Art Space Management class, a new addition to the Arts Management program taught by artist and curator Debbie Hesse. As one of three large assignments for the semester, the show is entirely devised and curated by seven students who have worked with artists Emily Whalen, Rob Datum, Meg Bloom and Joseph Saccio. Those collaborations have come out of a series of studio visits, conversations during City-Wide Open Studios (CWOS), and perusing local galleries. 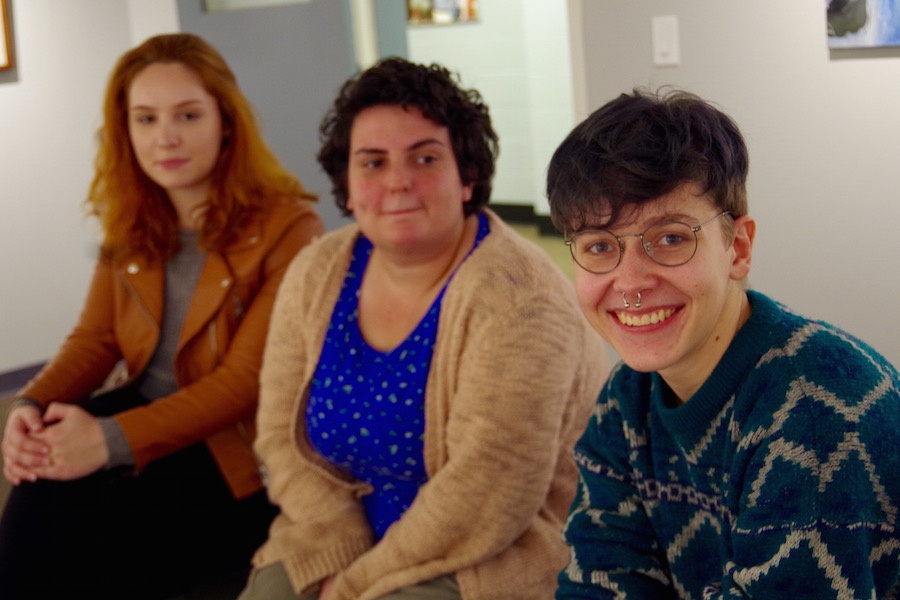 But the second, and perhaps more immediate, is a series by Albertus Magnus senior Whalen, inspired last year by protests against the Dakota Access Pipeline at Standing Rock Reservation. Whalen’s family is part Native American. Ensconced in school and unable to leave New Haven, she said the protests made her feel helpless.

“I couldn’t do anything where I was, so I made art,” she said Monday afternoon, finishing the install as she spoke. “The purpose was to humanize the situation so that you had some connection to it.”

She turned to four canvases and her paints and brushes. In the first (pictured above), a baby sleeps under a brightly beaded blanket, her head covered in thick, black hair, lips and eyebrows relaxed as she slips into her dreams. Around her, a river surges, clear water rushing over rocks and lapping at the sides of the bed in a sort of embrace. 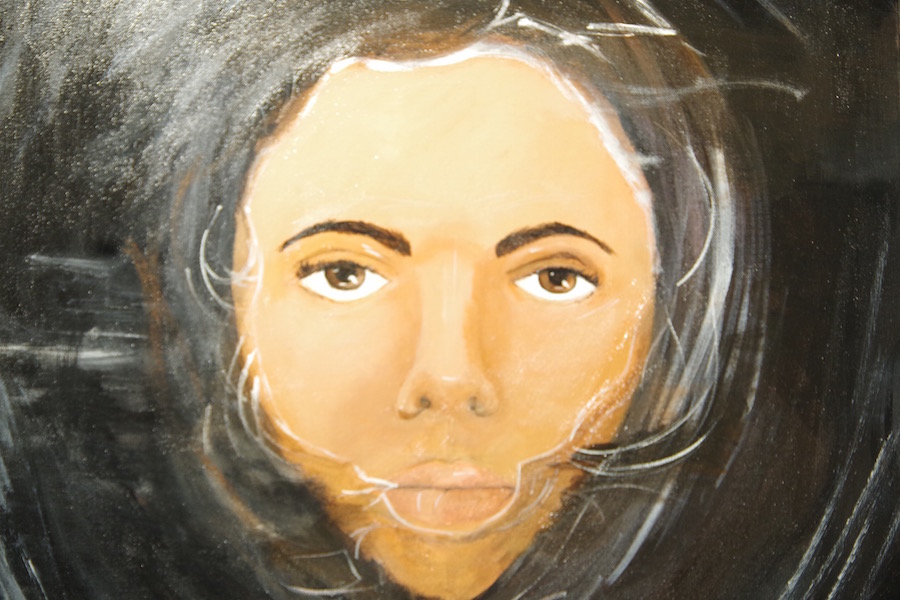 But the river is in danger: a deep, tarry stain begins to cloud the water in the next canvas. It spreads its oily fingers, inching in on her small, delicate body and the water that protects her. It crowds the frame, darkening it as the second canvas becomes a third. By the fourth, only her face (And how it is a young but weathered face!) looks out, surrounded by thick oil from all sides. Her eyes, now open wide, knock the wind clear out of you as they ask: Help me. Now. Please. I don't have much time left.

Whalen said she couldn’t have accounted for the timing of the show when she started to work on the series a year ago. Last month, the pipeline burst, leaking 210,000 gallons of oil in South Dakota and contaminating a field and surrounding area. Whalen said she fears that it’s only a matter of time until surrounding water sources are completely contaminated too.

“I feel like my art is what makes activism a thing for me,” she said. “My family is Native American, so everyone out there protesting is like a family member.” 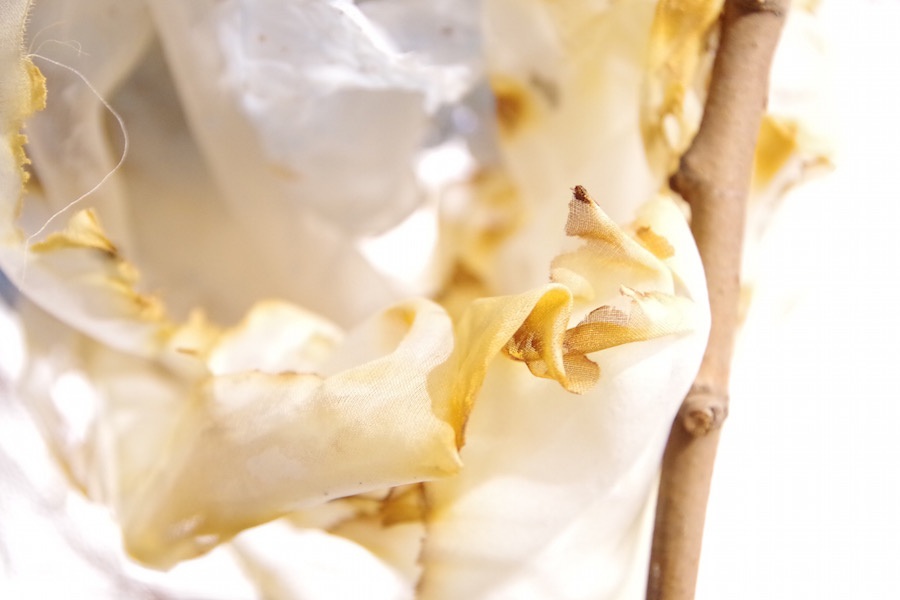 Around Whalen’s still-untitled series, the show blooms organically—although so much of it is about what may happen when things may not bloom so organically anymore. On opposite sides of the space, installations by sculptor Meg Bloom hang from the ceiling, swaying at their own speed. One, suspended in midair, looks like a an open chrysalis, with twigs where a tiny insect once was. Another, a dyed ball of recycled fabric, appears singed at the edges, spilling out like a flower that might actually be a weed. On the other side of the gallery, a length of fabric flows across a wall like water, in a sort of conversation with Whalen’s Untitled 1-4 nearby.

There’s a diversity of media, as Robert Datum’s sharp-edged, oil-heaped canvases make their way across one long wall, devolving into a sort of dark, unexpected chaos as they go. Hovering between Bloom’s Tender Ghosts (Yellow) and Intermezzo, his View From Old Colony Beach Road seems carefree and unhurried, the sky a smudge of pink against the beach and ocean. But his Uncas Lake series grows dark and aggressive, ending in a sort of statement that is not unlike Whalen’s oil-drenched Untitled 4 across the room. The darkness of pollution is going to end us all, if we let it. 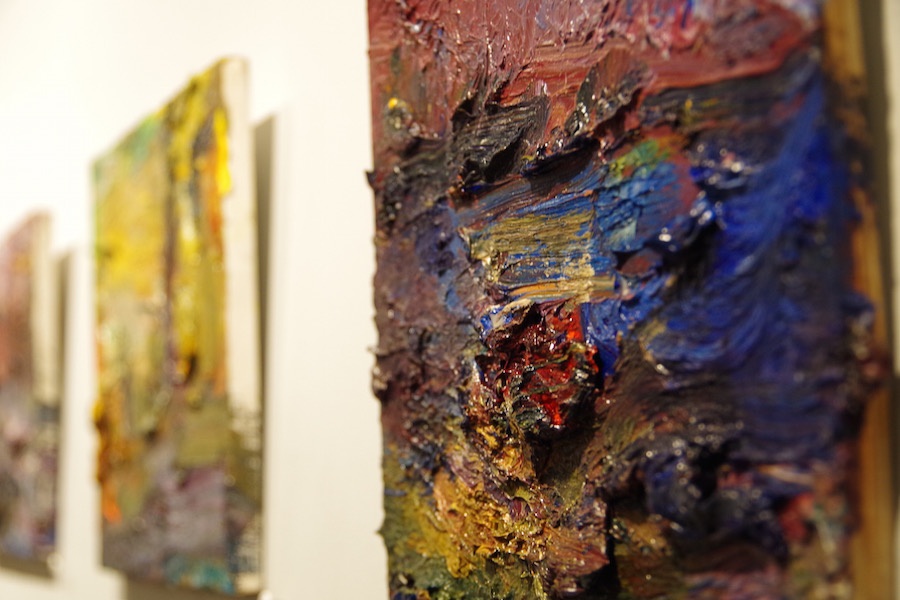 Beneath the works, said Hesse, there is the story of students becoming the next generation of museum and gallery curators, putting into words and visuals a social calling that they've identified. Working together on the theme, they’ve gotten into the nitty-gritty of what it means to mount and display objects. With only a month to put the show together, they entered heated debates about whether to have didactic labels or an exhibition checklist.

They divided and conquered, figuring out who was better at installing and who could write a press release. And what the space—a secular, progressive gallery at a religious institution—means for those who enter, regardless of affiliation.

“We’re linking spirituality to outward spaces,” said student Maxim Schmidt, one of the seven curators on the show. “Spiritually, we are connected to the earth in a way that commands us to care for it.”

“It’s very much like storytelling,” added Whalen. “You get to the end, and you’re like: I told the best story ever. I’m never going to top it. And then you do.”