Who Killed The King? 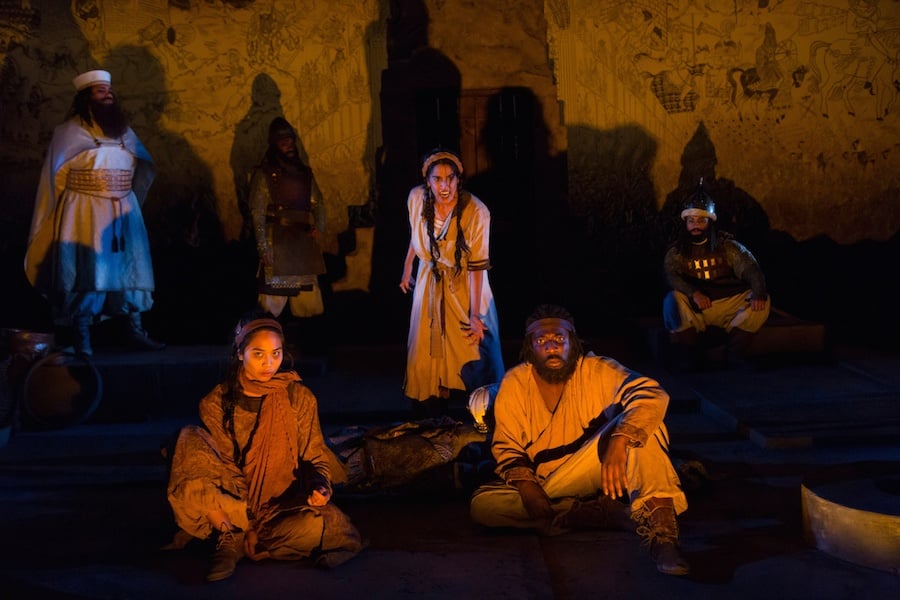 Francesca Fernandez McKenzie and James Udom in the foreground, Sohina Sidhu behind them. Setariki Wainiqolo, Curtis Williams and Sean Boyce Johnson are in the background. T. Charles Erickson Photo.

These truths, half-truths, and untruths frame Death of Yazdgerd, showing now through Saturday night at the Yale School of Drama’s Iseman Theater. Written by Bahram Beyzai and translated by Manucher Anvar, the play is directed by third-year MFA candidate Shadi Ghaheri, for whom it is also a thesis performance.

Written during Iran’s 1979 revolution and made into a film in 1982, Death of Yazdgerd situates audiences in the year 651, inside the small and dusty ruins of a flour mill in Marv, Iran. There are parallel universes set in motion: the playwright’s world, where the Pahlavi monarchy is coming to an end, and the play’s, where the Sasanian Empire races to a close as Tazi soldiers approach from all sides.

It’s the second world into which King Yazdgerd III has stumbled, fleeing the kingdom he has helped build and rule before it falls. That world in which his soldiers race to avenge him, burdened with the weight of an empire. And that world where he meets his end, at the hands of a poor miller in whose home he has taken refuge.

Or is that the story? The real story? Trapped in their own home, the miller and his family frantically spin tales of who, or what, killed the Shah, working to avoid death with their revisions. As they beg for their lives, they put into question history and her gatekeepers, and who exactly holds the key. 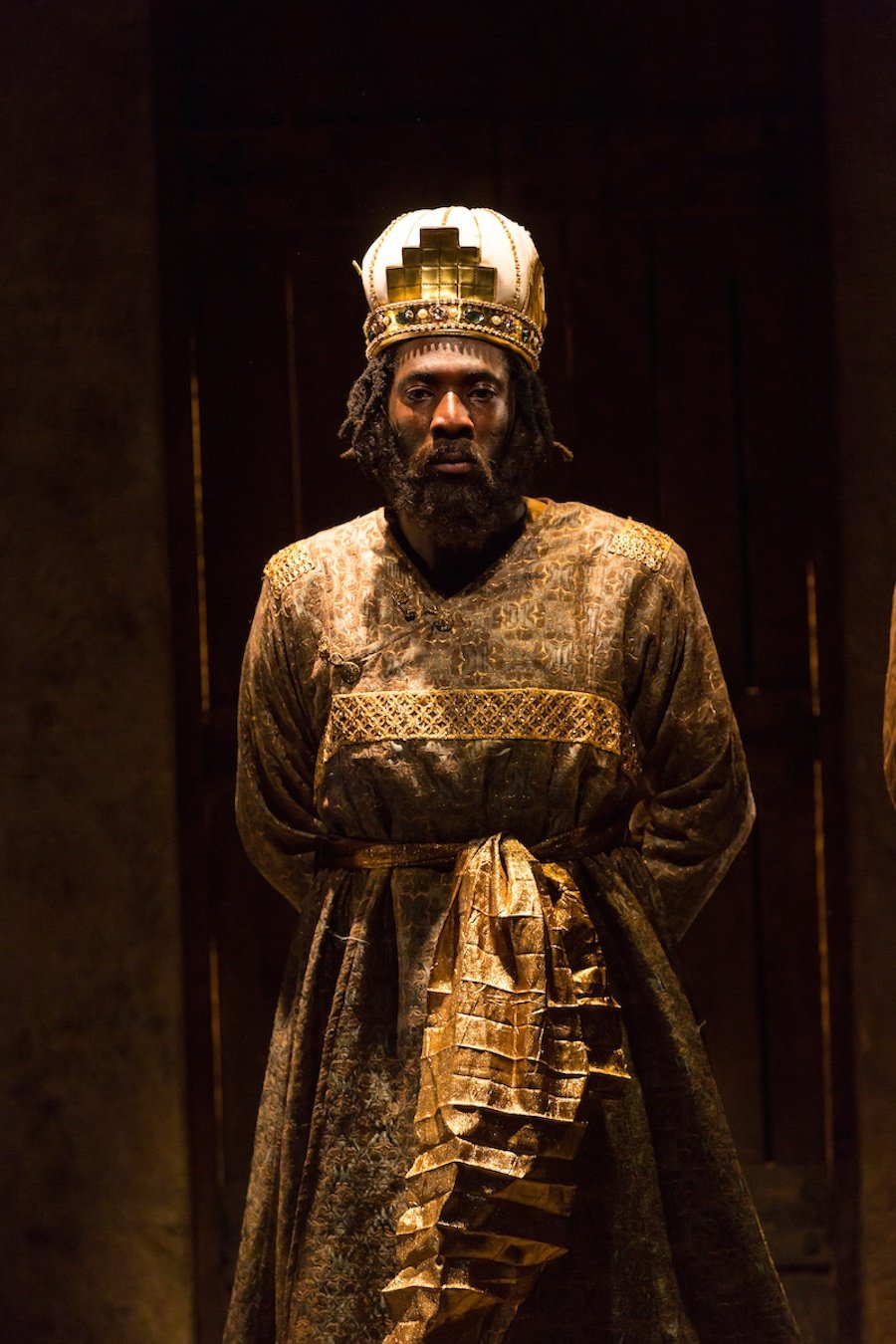 James Udom as the miller. Or is it the Shah? T. Charles Erickson Photo.

It’s something like a hybrid of Scheherazade and SITI Company’s Steel Hammer— a redemption story or stories wrapped in oral tradition. In one version, Yazdgerd has come to the miller dressed as a beggar, his riches concealed in a simple burlap sack. In another, he is dreaming his fears into being, awakened by the sound of someone rustling through his gold. In a third, the miller’s daughter is his earthly conquest, fighting him even as he rolls on top of her. In a fourth, the whole thing has been a misunderstanding. These go on and on, consuming the entire space by the end of the show.

Ghaheri has a track record of challenging plays with morally questionable characters; She trusts her audiences to rise to them. In the last two years, she has brought New Haven works on the bounds of human language (فریادا), human suffering (The Slow Sound of Snow, Trojan Women), human capacity for violence and cruelty (Titus Andronicus and LEAR). She has choreographed the refugee crisis and asked audiences to think about artists in exile.

This—a show so much about our moral ambiguities—is a synthesis of all of those, streamlining information in an old-new form of storytelling. Since the 1982 film, several theaters have taken on the play: Canada’s OneLight Theatre, San Francisco’s Darvag Theater Company, the Sanglaj and Bazigah theaters in Tehran (where the work was originally banned) just last year. But none quite like this, which marries ancient storytelling traditions of Naqqāli and Ta’zieh to the script.

Over original music by Iranian singer-songwriter (and musical celebrity) Mohsen Namjoo and Yahya Alkhasana, actors slip in and out of the role of Naqqāl, a dramatic storyteller who guides the audience through Yazdgerd’s flight and death from different perspectives. We get the miller, the miller’s wife, their daughter, Yazdgerd himself. It is spectacular in more ways than one: actors become shape-shifters, magicians, truth-seekers in a world where so much is obscured. In keeping with the form, they perform before a packed tapestry by Iranian artist Iman Raad, projections leading the audience through dream sequences, historic warnings, and lingering questions around the king’s end.

The company also employs Ta’zieh, a form of musical and dramatic narration performed in the round, with a literal rotating cast bringing the play to their public, and to each other. It’s the miller’s dust-choked, ruin of a house that gives way to the stage, a raised platform with a dead man near the front and a single, rickety set of doors in the back. The only way out is through them, into an orange, fluorescent landscape that looks like hell. 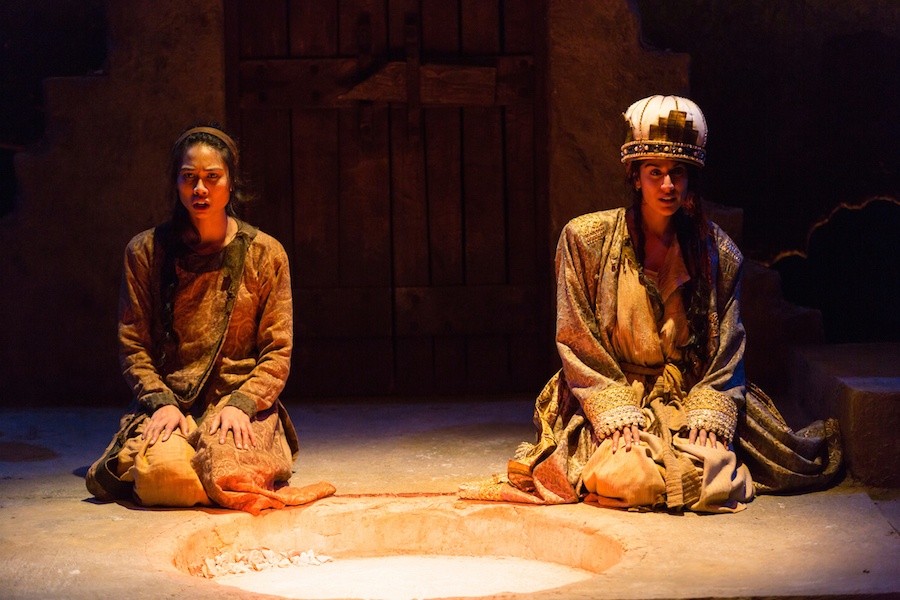 The actors are transfixing as they bring these forms to life, winding their narrations around music that includes heavy breath and sharp vocal whistles. Donning the Shah’s gold mask, Francesca Fernandez McKenzie (the miller’s wife) snaps from herself to not herself with a rapid fire, head-to-toe choreography. Her whole body becomes an instrument: she bends and jolts sharply, lifts her arms across her body, extends the hands as far as they will go and then wiggles her fingertips, wild and propulsive.

So too does her daughter (Sohina Sidhu), who is undone by the possibility of violence, and of hunger both literal and male as they descend upon her. As she becomes the Shah, donning his robe and crown on a body that is much too small for them, she is ferocious and unhinged. Her eyes blaze, go dead, blaze again. They are like a switch her body follows, turning on and off with the casual flick of someone else’s finger. She too summons voices from her very depths, losing herself in the process of saving her family.

But the play is also not without humor, conveyed largely through The Priest (Setareki Wainiqolo), who is neurotic and doubtful, a keeper of knowledge and piety who does not have that much of either. And the miler (James Udom) who realizes the situation’s absurdity and ultimately rolls with it. Their uncertainty makes clear the farcical qualities of not just revenge but rulership itself, and the importance of one being over another.

It is immensely timely. As the priest declares that “You cannot kill a king unless you kill a nation,” Death of Yazdgerd becomes a work not about this empire, but empire itself, the body politic personified. It is 651, yes, but also 1789 in France, and 1917 in Russia, and 1979 in Iran, and 2010 in Tunisia, and 2017 in the United States, and a million other places where people are not sure who has killed the king and who has killed the nation.

Or who is killing both, slowly, with the histories they forge. And who gets the last word.