There's A Map For That 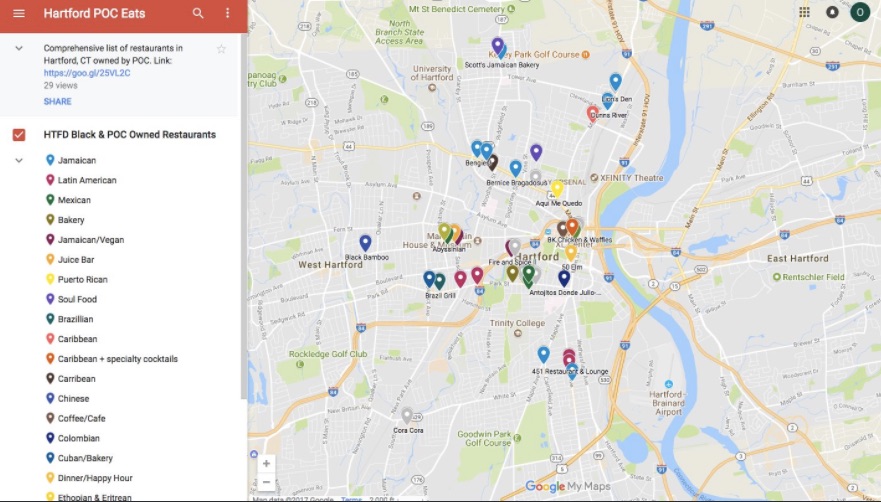 You're a party planner at Yale University, in search of a new caterer for your next event. You’d love for them to be a fresh face, reflective of the diverse city in which you live. So you go online to a google map, and search all of the city’s restaurants owned by people of color, until you’ve found just the right one.

That’s the idea behind NHV POC Eats, a new, community-powered project started by Ony Obiocha, director of innovation at Dwight Hall at Yale, and Elizabeth Nearing, director of community outreach at Long Wharf Theatre. After briefly discussing the project two weeks ago, the two put a call out for submissions via social media, and waited to see what responses they’d get. Now, the crowdsourced map is about to help New Haveners diversify their palates — as long as enough people from enough of the city’s different neighborhoods contribute.

The map is inspired by a project Obiocha saw, then began to work on, earlier this summer. Around a month ago, his friend Jason Fredlund mentioned that he was starting a simple, running list of restaurants owned and operated by people of color in Hartford. Fredlund is a program director at the Hartford-based Discovery Center. The project dovetailed with his professional work, dedicated to equity and access in education.

The idea, then just a simple spreadsheet, caught on. Soon, the list totaled over 450 restaurants, from Jamaican toBrazilian to Ethiopian to Japanese to Soul Food. Channeling hometown pride — Obiocha was raised by Nigerian parents just outside of Hartford, though he now lives in New Haven — he jumped on to help, grafting a Google map over the sheet’s data points. After ordering metadata (categories) to appear by type, he had a map with bright, culinary pins that Hartford residents could search. One click, and a culinary world exploded at their fingertips.

“When I saw it, I thought: This would be pretty helpful as a map,” said Obiocha in an interview at New Haven’s Whole G, one of the city’s many immigrant-owned businesses. “That’s really all there was to it.”

After Hartford was complete, Obiocha enlisted Nearing to work on New Haven. It started with a single tweet: Obiocha sent out the map, and Nearing responded immediately with the phrase “New Haven please?” The two put together a quick submission form, and sent it out over Facebook, Twitter and email.

Slowly, they started getting results. Some New Haveners left suggestions in Facebook comments, or submitted single entries in the online form. Others, like John Martin of the Bradley Street Bicycle Co-Op, populated fields for State Street, kicking off a trend that Nearing hopes will ultimately include hubs like Orange Street, Sargent Drive, and Grand Avenue.

When the map is populated, the two see doing something like a “POC Eats Taste of New Haven,” modeled after Colin Caplan’s eponymous excursions and Lee Cruz’ now-legendary Grand Avenue culinary tour. But first, they need community input to complete their missing culinary knowledge.

“If we zoom out, I think that one thing this is about is New Haven’s desire to participate in defining itself,” said Nearing. “For a population that’s so transient, there are all these hidden gems. Let’s make them less hidden. What’s great about it is that it’s all easy.”

“I’m thinking about the real-world implications of this,” Obiocha added. “It lowers the barrier to access."