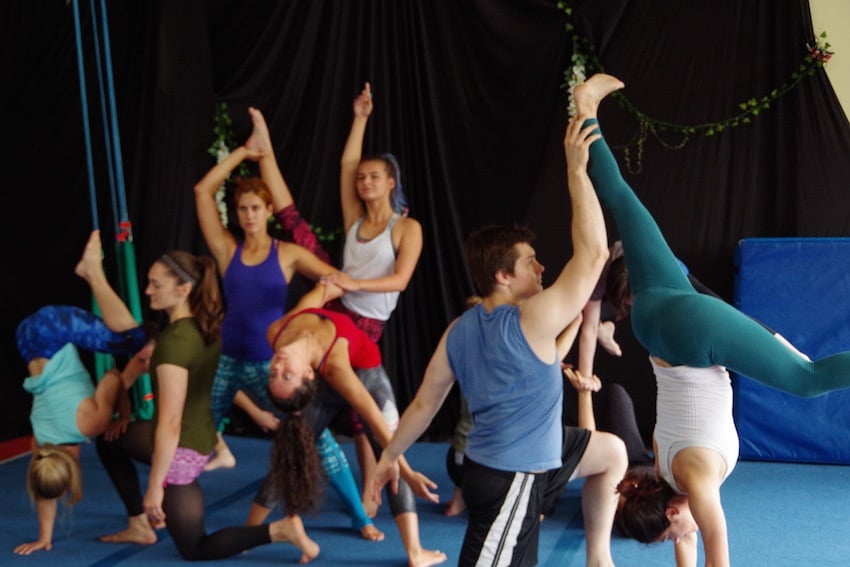 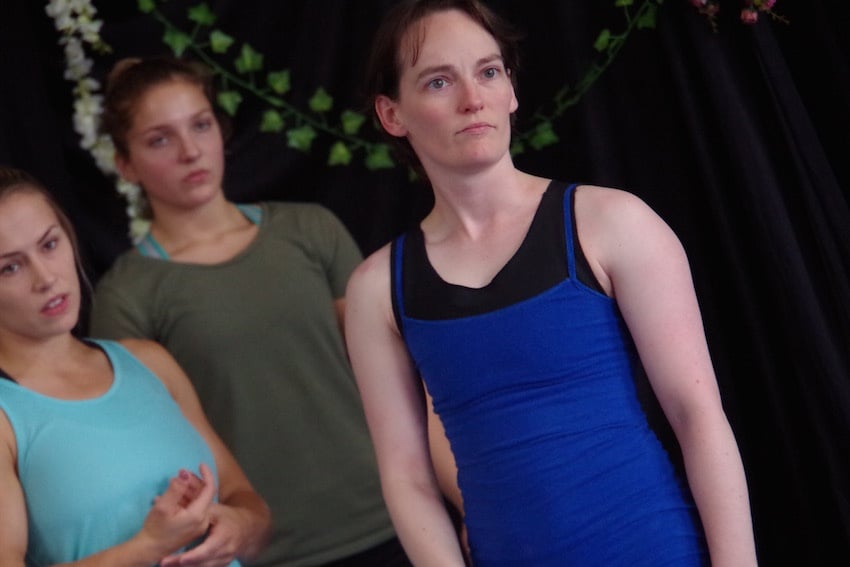 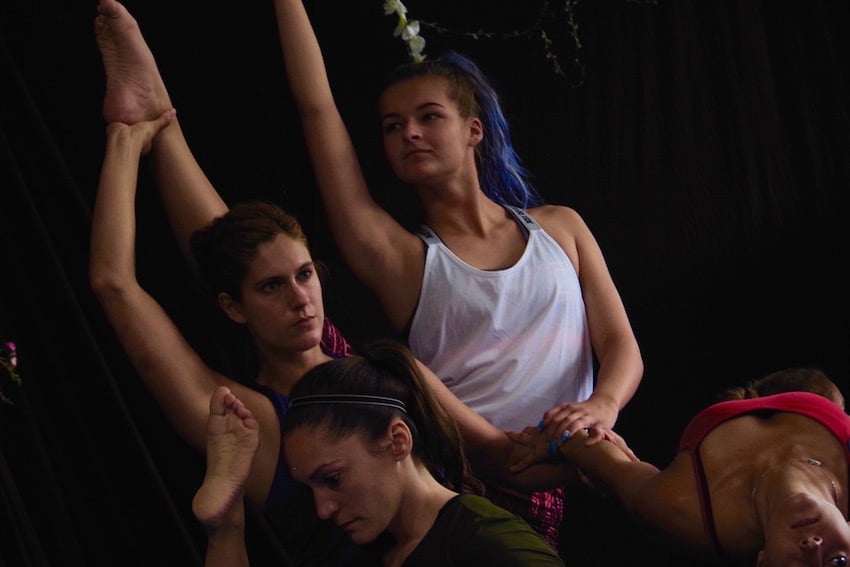 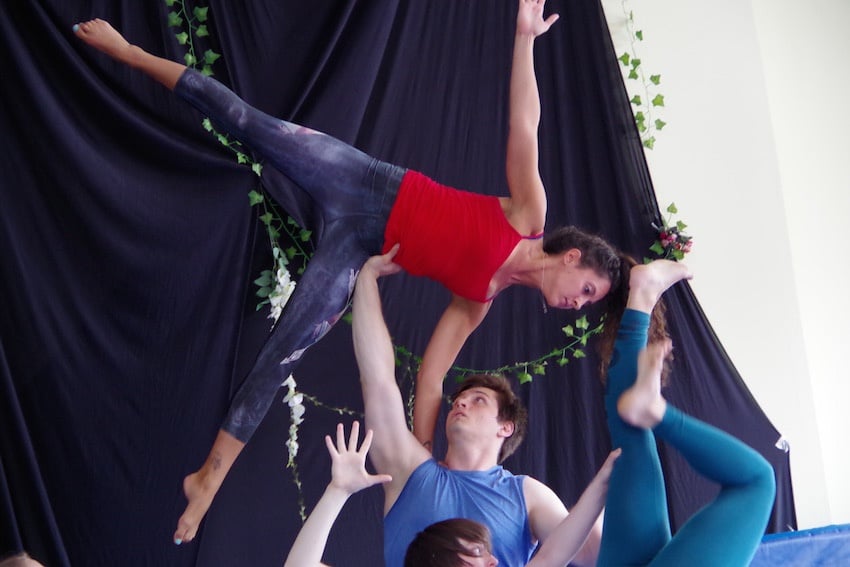 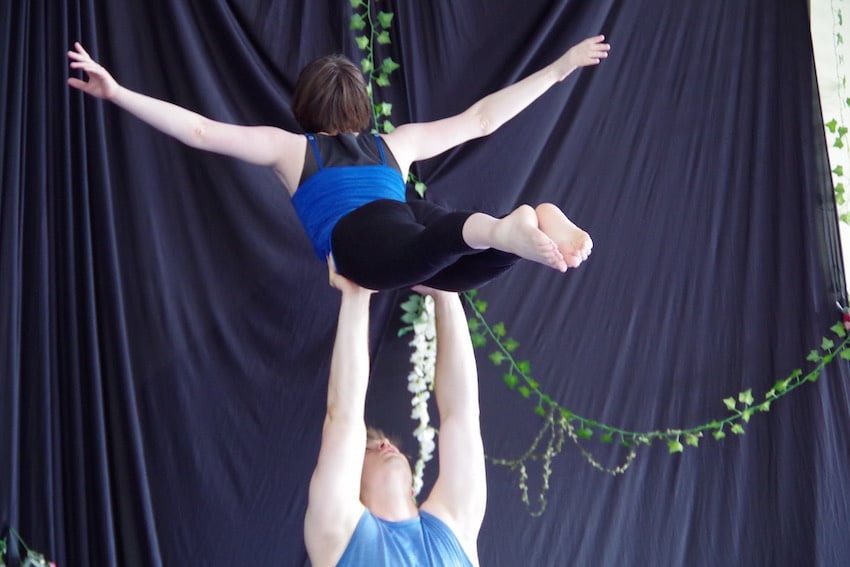 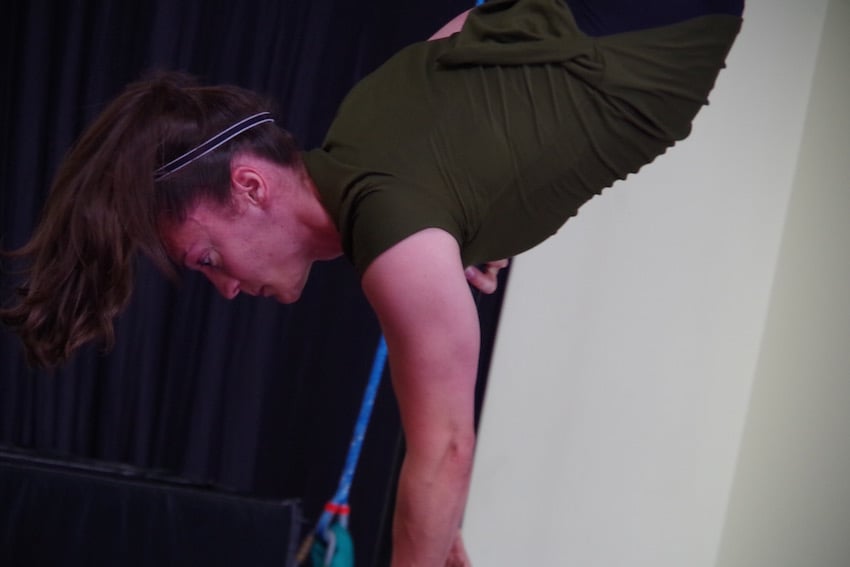 Inside Air Temple Arts, something sinister was afoot. A clump of acrobats heaved forward, the weight of something huge on their shoulders. A woman, eyes fiery and wide, emerged from the center of their human mass. She lumbered toward a high black pole, and began to climb.

Lorde blared from the loudspeakers, the lyrics everybody wants to rule the world coasting over the group. Things were bad, and getting worse.

But Air Temple hasn’t been overtaken by evil acrobats. These are scenes from Reverie in Spirit & Shadow, the latest performance at the aerial and circus-themed teaching center. Conceived, written and produced by Instructor Meghan Magner and Owner Stacey Kigner, the show runs this Friday and Saturday at Air Temple’s home base in Woodbridge. Tickets are $15 for adults and $10 for kids.

Breaking with tradition — performances are typically at Educational Center for the Arts (ECA) on Audubon Street — Kigner chose to hold Reverie in Woodbridge to lower economic barriers to entry, and show off what the troupe can do in its natural element.

But it’s been just as complex and time-intensive an undertaking as Air Temple’s last shows, Sherlock Holmes and The Sapphire Night and Reverie in Black and White. When Kigner and Magner began planning Reverie in Spirit & Shadow in March, it was the shortest time period they’d ever had to work with between shows. Magner knew she wanted to marry her love for circus and aerial with her passion for the environment, but the remainder of the show — plot, characters, numbers, length — was a blank slate.

Kigner said she also knew that she wanted this performance to be more collaborative, open to Air Temple students and participating partners from outside New Haven. The plan was for them to join Cirqularity, Air Temple’s performance company, for the show. Enlisting those groups, then ironing out rehearsal schedules took time. Then there was the task of transforming the Woodbridge practice space into a set, decorated with fabric flowers and a long black tarp on the floor.

At a rehearsal last week, both of them said it has been worth it. Reverie hits a sweet spot at the juncture of poetry and politics, a lyrical meditation on environmental responsibility. When the show begins, an enchanted town sits on the edge of corruption, its citizens at risk because they have not been good stewards of the environment.

As they fail to protect the forest, the ground, their natural water sources, a dark spirit invades the town, threatening everything and everyone within it. What they choose to do — band together and change their ways, or continue down this ruinous path — will determine their future, and ours.

“Hopefully that will hit home for a lot of people,” said Kigner in an interview last week. “Especially like, we all try to be conscious but there’s always more that we can be doing. Even in trying to be conscious, we take a lot of easy steps, but then there are harder steps that I know I could be taking to be a better steward of the environment.”

A plastic to-go cup with a plastic straw sat by her right hand as a sort of reminder.

It’s not the first time Air Temple has gotten political. Sherlock, in which Magner played the title character, boasted feminist overtones. Cardboard, hand-decorated signs from protests dot the practice space, as if they are ready to go at the notice of a new rally. And most members are despairing about the state of the environment under the current administration, which has made the show feel particularly timely.

“I wanted a platform to voice my concerns for the way things are right now,” said Magner as she geared up for run-through last weekend. “There’s not really a lot of awareness or care for it … so this was a really good way to just voice how I feel. It’s also [about] realizing that it is all connected, that there is a serious connection between your everyday actions and how it affects the world around you. How you need it, and how you can’t take it for granted.”

Reverie in Spirit & Shadow runs Aug. 18 and 19 at 8 p.m. at Air Temple Arts, 1 Research Dr., Unit 4, Woodbridge, CT. There will be pre-show activities for families outside the studio. Ticket information here.