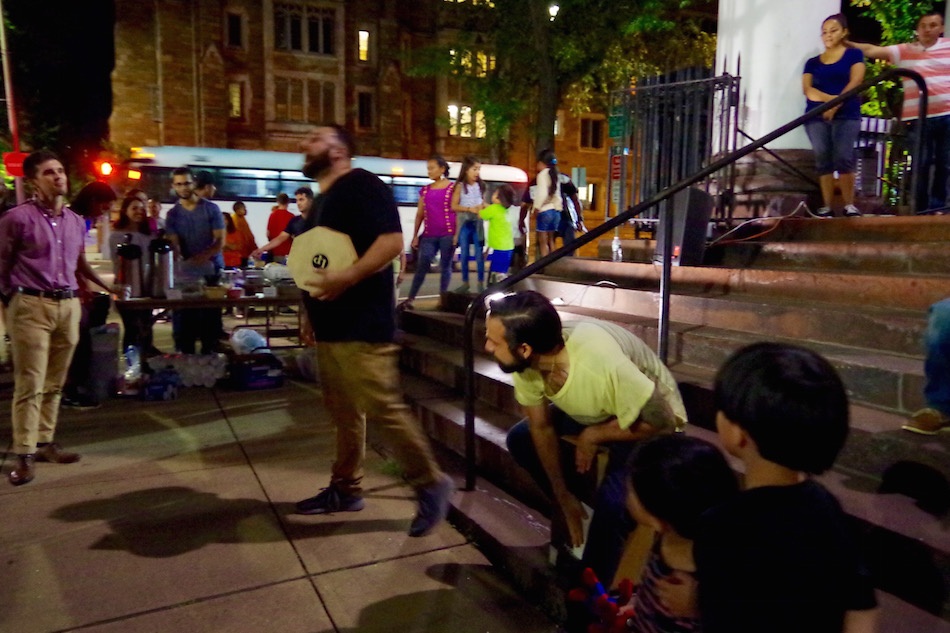 Outside First & Summerfield United Methodist Church, strains of Silvio Rodríguez’ “Ojalá” drifted over a growing crowd. Vibrating, throaty Spanish lyrics and guitar filled the air. A cajón joined in, then tens of hands clapping in unison. From the church’s steps, nearly 100 faces stared back, wet-eyed and singing along.

But Rodríguez himself was nowhere in sight. His words came through the artist Ceschi, who had chosen the song as a protest against Donald Trump, and against deportation in Connecticut. 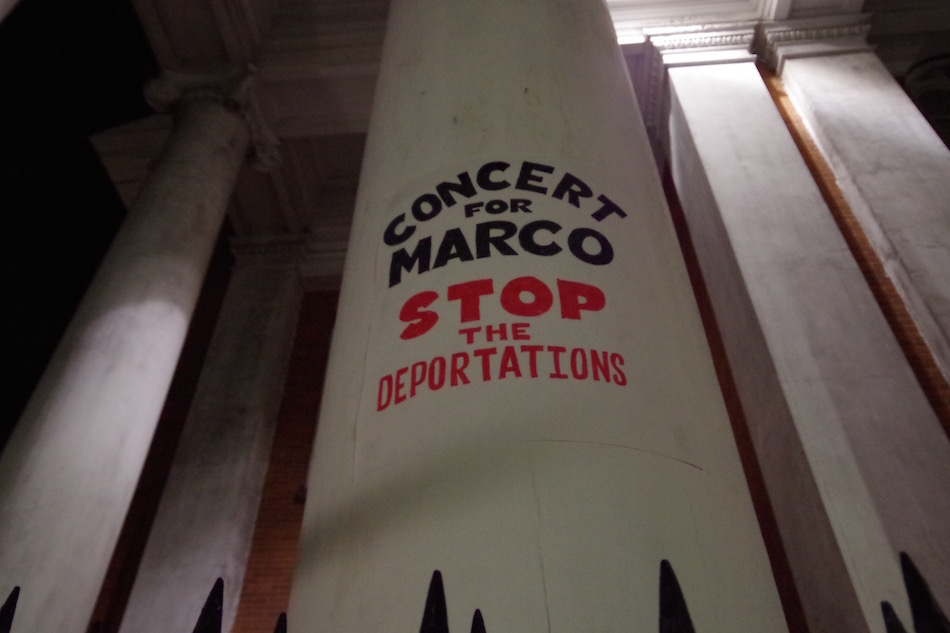 The scene outside the church. Lucy Gellman Photos.

Organized by Unidad Latina en Acción (ULA) member Monica Bunton, the event joins rallies, prayer vigils, and marches against deportations in Connecticut that have been held this summer. A dinner supporting Reyes will be held Saturday at 7 p.m., inside the church.

Reyes first took refuge at First & Summerfield on August 8, defying deportation orders to return to Ecuador after two decades in the United States. Two weeks into his stay, he has become a symbol of resilience and bravery — even as ICE levels new strikes against undocumented immigrants. 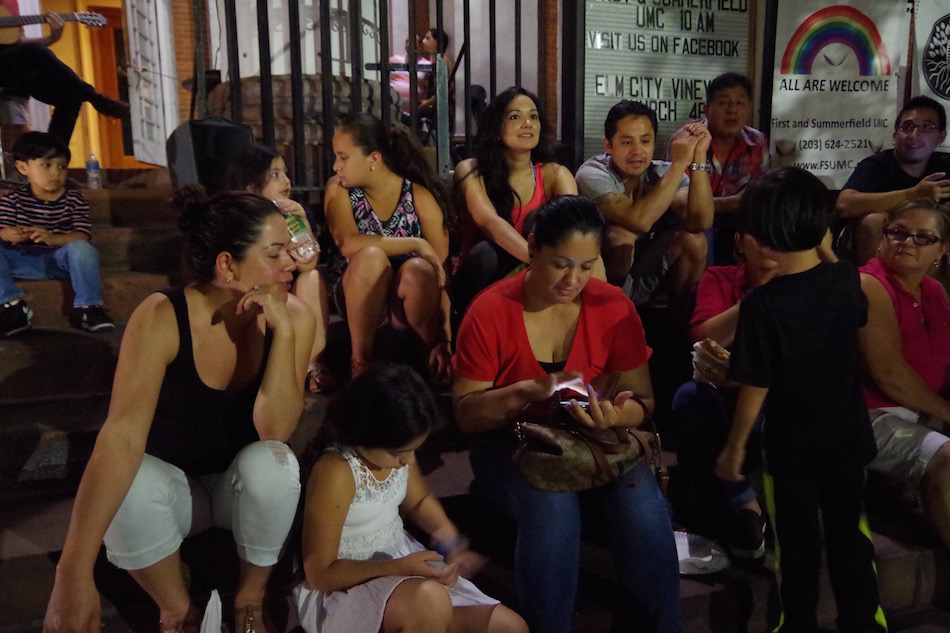 “It is very important for my family to have the community here for us,” he said, addressing the crowd for just a moment Thursday before retreating to the side of the building. “It has been two weeks since I entered the church, and it hasn’t been easy. I am grateful for all the support.”

From the steps and sidewalk, community members cheered, gathering in clumps to chat and play with each other’s children. On the corner of Elm and College Streets, members of Reyes’ family sold hot coffee and cheese empanadas, still warm and puffy from the oven and coated with a thin, grainy crust of sugar. Reyes’ wife Fanny had made them earlier in the day, assembling them so concert-goers would have something to eat.

“I’m grateful to know that there’s this community,” said Reyes’ daughter Evelyn from behind the empanada table. “We’re holding on. It [the concert] means a lot to me. It’s been hard because my dad hasn’t been able to come out. His friends and family visit him every day, but it’s hard.” 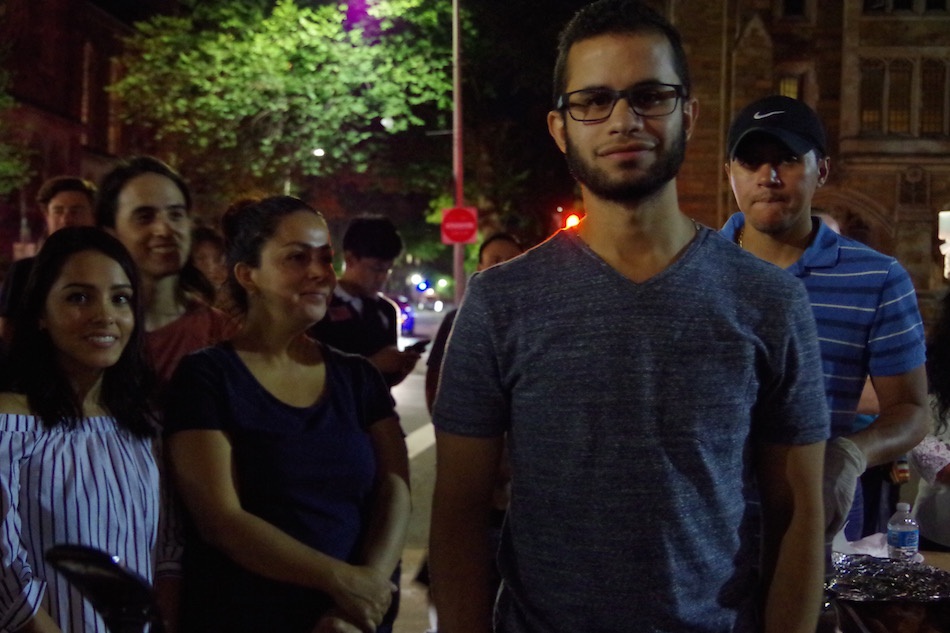 “This motivates the whole family,” added her husband, Bryan Martinez. “You get pumped up, no matter how tired you are.”

As if on cue, musician Conor Perreault appeared atop the steps, guitar in hand. Part of the city’s indy music scene, Perrault set a political tone for the evening, launching into a set that included an original song with facts about Ecuador, and several pieces preaching inclusion.

“I knew a little bit about the story, but I wasn’t following it very closely,” he said after preforming, as the first few notes of Alex Burnet’s “Hey How’s Heaven” floated over the crowd. “I read up on it a bit more, and I was particularly moved by it because it was a very specific family-based story, that was what moved me to it. Sometimes political things can be so abstract.”

His words set off a chain of songs, both original and covers, soaked in the history of protest. Playing solo, Patrick Dalton of The Proud Flesh returned to “Fanfare for the Pathetic Loser,” a protest piece he wrote last year about now-President Donald Trump.

He couldn’t tell the truth if he was held at gunpoint/But his lies are told with such aplomb/Says left is really right/Says black is really white/He says don’t you worry, learn to love the bomb, he crooned, looking up every so often at the crowd.

Ceschi kicks off his performance.

But Ceschi brought politics back to the forefront of his performance, greeting the crowd in Spanish before coming down the stairs, and dropping an a cappella version of “Forever 33” with his brother David wailing away on cajón. At the top of the stairs, Reyes looked on, holding his wife’s hand as Ceschi performed.

But the musician was just getting started. Heading toward Marco and Fanny Reyes, Ceschi urged the crowd to come in closer, bodies heading up the stairs. 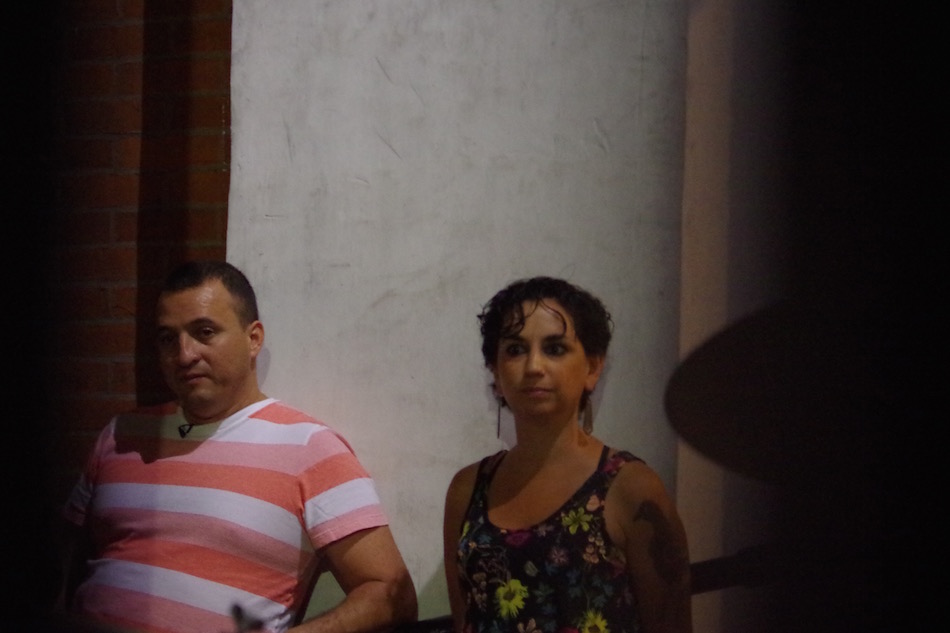 “Can everyone hear everything?” he asked before launching into “Ojalá.”

A cheer went up from attendees, many starting to sing along. A sort of folk ballad (Rodríguez was the founder of Cuba’s Nueva trova movement), Ceschi said he had chosen the piece because “it’s written to a tyrant … that’s really what that song is written about. It’s basically talking to somebody preserving an old government of yes men. It’s a really strong song.”

To cheers, he finished the song a cappella, then went into two pieces from his 2015 “Broken Bone Ballads.” No sooner had he left the stage than cries for “Otro! Otro!” went up from the group.

“I was fired up because of the situation more than anything,” said Ceschi after the concert. Fired up, and distraught enough for it to see into his performance. “I was shook over it … I was messing up songs because I was so upset over the situation.”

“I could call it anger, but also, in a way, it’s strength to see this out here, this version of New Haven. This is the New Haven that I love. It’s what I think of [when I think of] America. These are the parts of the United States that I love. The diversity, the culture. So, it’s strength, but it’s also … I was also kind of furious.”

That strength, love and fury reverberated through the crowd, from the entrance of the church onto Elm Street and the New Haven Green below. Addressing the crowd, Meriden City Councilor Miguel Castro announced that “we offer our resources and support for making sure we keep Marco and his family in the community … we are here in unity and solidarity.” 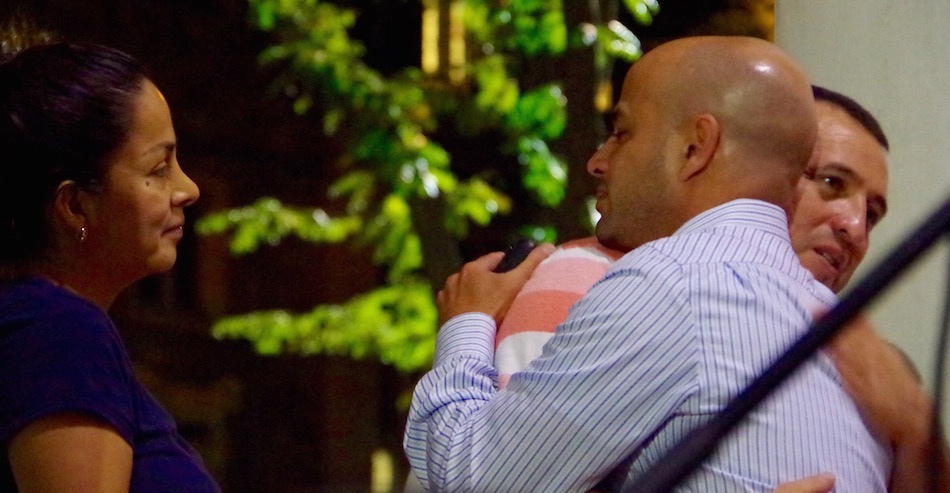 Miguel Castro with Reyes and his wife, Fanny.

On the crowd’s edge, Reyes’ friend Endelia Cruz Dominguez swayed along to the music, balancing her son Edward on her hip. She had spent much of the day making empanadas with Fanny Reyes, and stuck around to show her support for the family.

“I support Marco,” she said. “When the law is unjust, we must search for justice.”