Playing In The Park 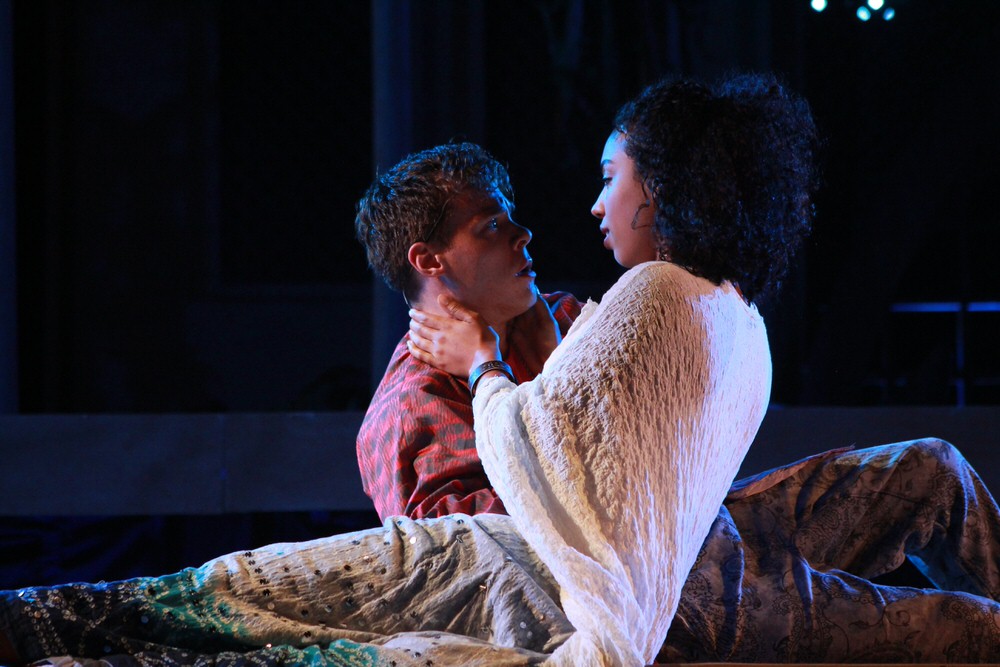 Jamison and Johnson as the titular characters in The Tragedy of Romeo & Juliet . Mike Franzman Photo.

“Is this a part of the play?” The young voice behind me asked, in an earnest attempt at subtlety.

Beyoncé’s “Crazy in Love” boomed in the foreground. As the song faded, Elm Shakespeare Company’s (ESC) production of The Tragedy of Romeo & Juliet soldiered on before us.

After opening Aug. 17, the play runs through Sept. 3 at Edgerton Park. All performances are free and open to the public.

A longtime Shakespeare fan, I had come to see the play in its second week, as actors settled into their roles and audience responses started to ripple throughout the community. Nestled on our blankets and lawn chairs, we came equipped with snacks and sweaters, surrounded by our neighbors.

The commentary of the young Shakespeare-goer was just part of the magic of seeing Shakespeare in a public space.  On stage were city favorites James Andreassi and Gracy Brown playing the fallible voices of reason, the friar and nurse. 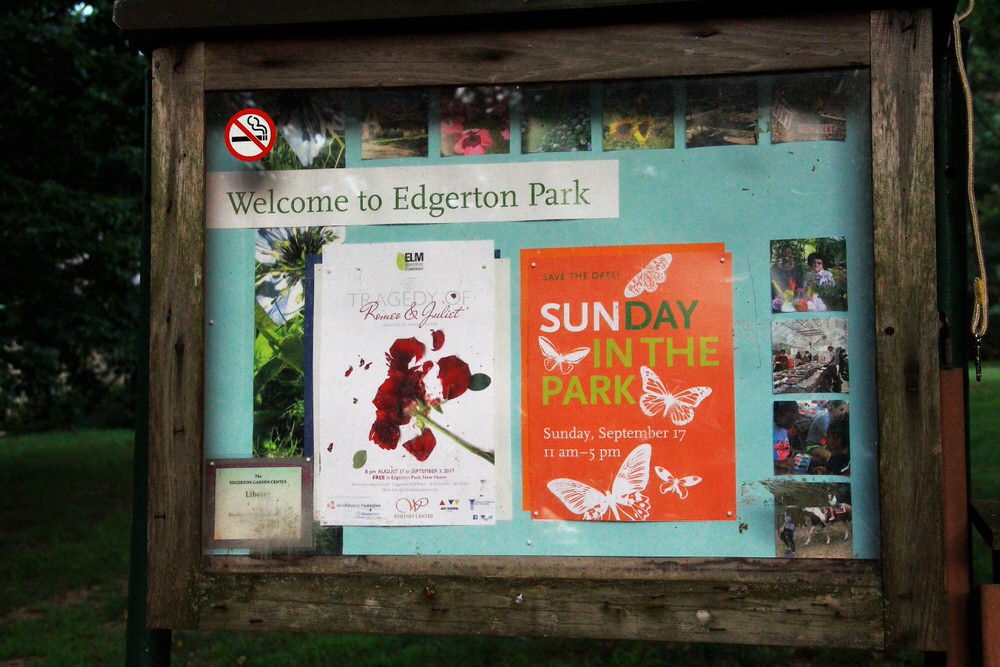 It’s this that makes Edgerton Park’s playground a diverse representation of artists working in our small city for three weeks each summer.  The audience it gathers, and demands, is impressive. It isn’t a summer in New Haven without Shakespeare in the Park.

And the text as challenging and enticing as the park is free and friendly. Romeo & Juliet is a tale that’s been played all over the world for the last four centuries. Their names are synonymous with love; their stories hold a central place in our cultural canon.

The words hold a kind of depth that gives artists and students a wealth of information to tell their story. Not for nothing, there has never been a United States without the influence of William Shakespeare.

In New Haven’s performance, Director Raphael Massie writes in his director’s note that “hate has been given permission.” Choosing love is not simple. It is a courageous act, taken sometimes with great risk—and often too recklessly, as is shown in every retelling of this tale.

Our young lovers are both stuck at a junction wherein they are supposed to find themselves. For Juliet, that means finding a husband. For Romeo, he can do what he wants. He is happy wooing and romancing. We watch as he pines for Rosalind and the world around him mocks his unrequited woes.

Until he meets Juliet and his world gets turned upside down. His world, and Verona’s. Following their iconic sonnet, Juliet gets down to business right away: get it on paper. Get married. Quickly she asks about next steps: she’s a practical lady who does not want to marry her parents’ husband of choice.

As the the two lovers navigate their passions, they become more and more isolated from the rest of Verona. The world around them erupts in violence as the tensions run high. 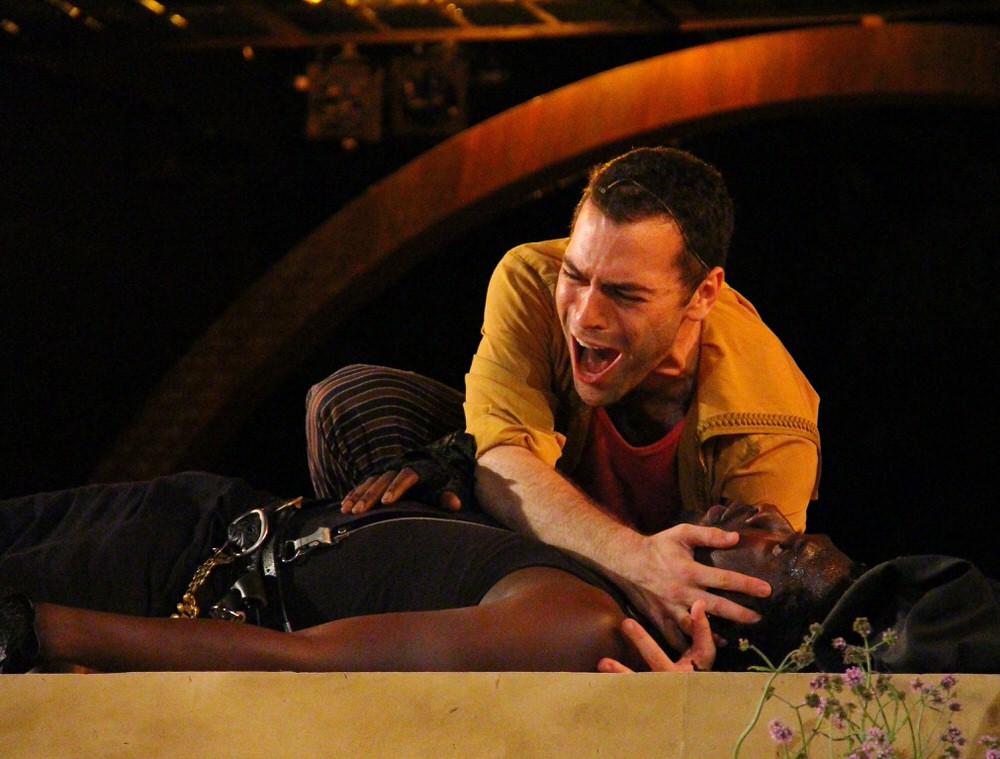 The pesky secret with Shakespeare is that the answers are almost always within the text itself, requiring the artists at hand to delve within rather than search without.

In ESC’s production the search for external stimulus is extraneous. Heated dialogue is often disrupted by interludes of pop music, halting the dramatic action of the play. It might be fun, but the playlist gets in the way of the actors and their words throughout the performance. Romeo’s romantic soliloquy searching for Juliet is overshadowed by Adele singing Bob Dylan’s “Make You Feel My Love.”

It’s a song that’s used more effectively later in the play, when the whole company emerges singing together as Juliet enters her tomb in the most moving moment of the production. There is an immense power to Verona singing as one, the only brief unison in a world of chaos.

The gravity of the moment is heightened by the bridging of real and perceived barriers in New Haven — coming together to sing and perform in a park in the summer. Town and gown disappear while this ensemble of so many parts of New Haven comes together in song.

It also raises questions. How can performance this public, open, and free go farther to bring us all together? As Courtney Jamison concluded after the bows, now is the time to “lead with love more than hate.” Her statement echoed the Friar’s closing words:

“A glooming peace this morning with it brings.

The sun for sorrow will not show his head.”

The peace this play provides is indeed a glooming one. Our young lovers haven’t survived their quest for personal happiness. The bold and brash Mercutio (James Udom) and Tybalt(Clare Warren) don’t live to tell the tale or fight for their side. The worlds in Verona fall in love and fall apart. We are told we must suffer to get to peace in both love and war.

It’s why these stories are retold. It’s also why the performance opens with Elm Shakespeare founder and performer Andreassi reminding us to listen carefully — that maybe next time we can get to that peace without the glooming.

“The which if you with patient ears attend,

What here shall miss, our toil shall strive to mend.”

That’s where Elm Shakespeare — though imperfect — gets it right. While I wish the access to this kind of storytelling expanded beyond the walls of Edgerton Park — to Trowbridge Square, Goffe Street's De Gale Field, Criscuolo or Edgewood Park — this summer’s The Tragedy of Romeo & Juliet is not just a play.

It’s also a picnic, a gathering, a ritual togetherness. It’s a reminder that perhaps if together we listen carefully to cautionary tales, we can control our fates. The role of an audience in Shakespeare is central. It is not the players alone, but you and yours that make it worth going.