A History Reclaimed, One Queen At A Time

Just to the right of a stripper pole, Madison Sapphire Duchannes is killing it. In one hand, she grips the microphone tightly, lifting it to her mouth as she flutters her blue-powdered eyes and long, mascaraed lashes. The mic casts its bulbous shadow on her outfit — red bra, red and black bustier, red panties, everything hugging minuscule, angular curves. She drags her right hand through her hair, pulling off a long blonde wig. Sweat rolls down her scalp, blush-kissed cheekbones, forehead.

The picture is part of #NHVDrag, a new, limited-run book of photography and poetry by artist Daniel Eugene and his imprint Studio Feruvius. Chronicling the drag scene at Partners Cafe on Park and Crown Streets, the book premieres this Saturday at New Haven’s annual PRIDE Block Party on Orange Street.

With 500 signed copies to start, it is the first volume in a three-part series. The next books, to be released over the next year, will explore drag queens and performances at 168 York Street Cafe and Gotham Nightclub.

For Eugene, the subject matter is both unexpected and fitting. While he has recently begun to self-identify as a “queer” artist, he hadn’t ever planned on making drag part of his work.

He’d seen drag performances in New Haven, beginning with Bubblicious at Gotham Citi in 2003. He enjoyed going to them, he said. But he didn’t think of it as his medium. He had another ministry: his line drawings, risk-embracing journals and massive screens, and a growing interest in photography with a trusty Pentax K-01.

But that changed this February, when he landed at Kiki Lucia’s “Let’s Have A Kiki” on the final Friday of the month. He was spellbound watching Kiki Lucia take the floor, and then found himself wanting to capture the action as she worked the room. Soon, his small Pentax was with him whenever he went out to a drag show. 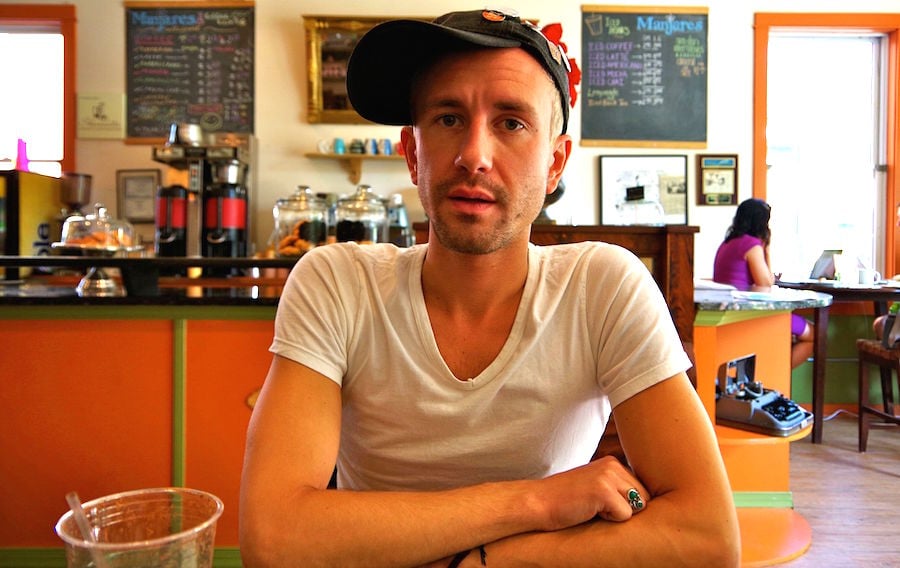 Eugene: "It's sensational and it's slaying." Lucy Gellman Photo.

“If you think of drag as an art form, it’s sensational and it’s slaying,” he said in a recent interview at Manjares Bistro on Whalley Avenue. “But it didn’t occur to me until I went to a performance and took some photographs. If you think of Partners as a space, there are mirrors facing each other, and this infinity effect. You add drag and the lid blows off. There’s a feeling of something cosmic. Your conception of ‘normal’ shifts, then you’re in awe.”

As Eugene attended more shows, he said he became enthralled with drag as a sort of living history. A history that started before drag balls in the 1980s, solidified and strengthened though the last decades of the twentieth century, and now belongs partly to him.

“My interest in photographing is certainly related to my interest in doing drag,” he said. “I’ve put on heels before — it totally changes your sense of center. I see it as something cosmic … we really need to release what we see as normal.”

But his impulse runs deeper than that. With that initial sense of belonging, Eugene said, came the compulsion to tell New Haven’s drag story firsthand. When he started photographing performances seven months ago, he said he saw it as a chance to stop letting outside authors, often academics, drive the narrative. Since beginning the project, he has tried to capture the joy and electricity of performances from within the crowd.

“I didn’t want to be a voyeur here,” he said. “When I’m shooting, I’m feeling the entire room. Its movement, its environment. I’m creating a documented history that highlights social contributions, a future history.”

Those words seep into every picture. In shots taken against the huge, blooming rainbow umbrellas at Partners Cafe, queens glide and strut across the floor with glamor and propulsion, an ever-changing light casting them in different shades.

Reaching beyond the frame, Summer Orlando offers someone a huge, glittering red apple as she takes the floor as Snow White. Casey Fitzpatrick is young and wistful and wide-eyed, singing right to the audience with her arms crossed over a white button-down and tie.

Kendra Fiercex Rose transforms into a mermaid queen, drenched in green as she sings her heart out from the corner of the stage. Lucia Virginity (pictured above, in blue light) stops right in front of the camera, wide eyes locked on the lens. In a collage on the same page, she’s dancing too fast for the camera, a blur of lipstick, eyeshadow and big red bangles as she points into the crowd. Behind her, a disco ball winks down at the audience.

In a rare moment of stillness, Kiki Lucia prepares for a show, tongue poised between her teeth as one hand cups the back of her head. Her wig has not yet been fastened; her hands are purple claws. A silk cowl hangs over her chest, making way for heavy, glimmering costume jewelry on her neck and ears. She is Kiki caught in the in-between, contemplative before she slays.

In grainy, saturated color and dreamlike hues, the photographs situate viewers in the space, inviting them in for a drag show or after-dinner drink (or five) and chance to mingle. A striking final collage drives home something deeply communal.

In it, Partners’ after-closing crowd lingers outside the bar on Crown Street, where the artist BiP (Believe in People) painted a massive black-and-white mural of Anne Frank in 2011. In front of her, people lean in for conversation, smoke cigarettes, burst into fits of laughter, lean against their cars in prolonged goodbyes. At one point, someone else has gotten a hold of Eugene’s camera, and he looks to his left, half-watching as a queen strokes his bare chest.

Anne has been our witness, reads the final sentences of the book. She is our reminder that we are beautifully human.

“There’s such a celebration of humanity that happens,” Eugene said. “There’s this essential and fantastic thing about being alive. It’s about New Haven, drag, humanity, photography, place, history.”

“This is heraldic,” he added. “If we had governments that celebrated diversity, I can’t even imagine. The world would evolve so quickly.”