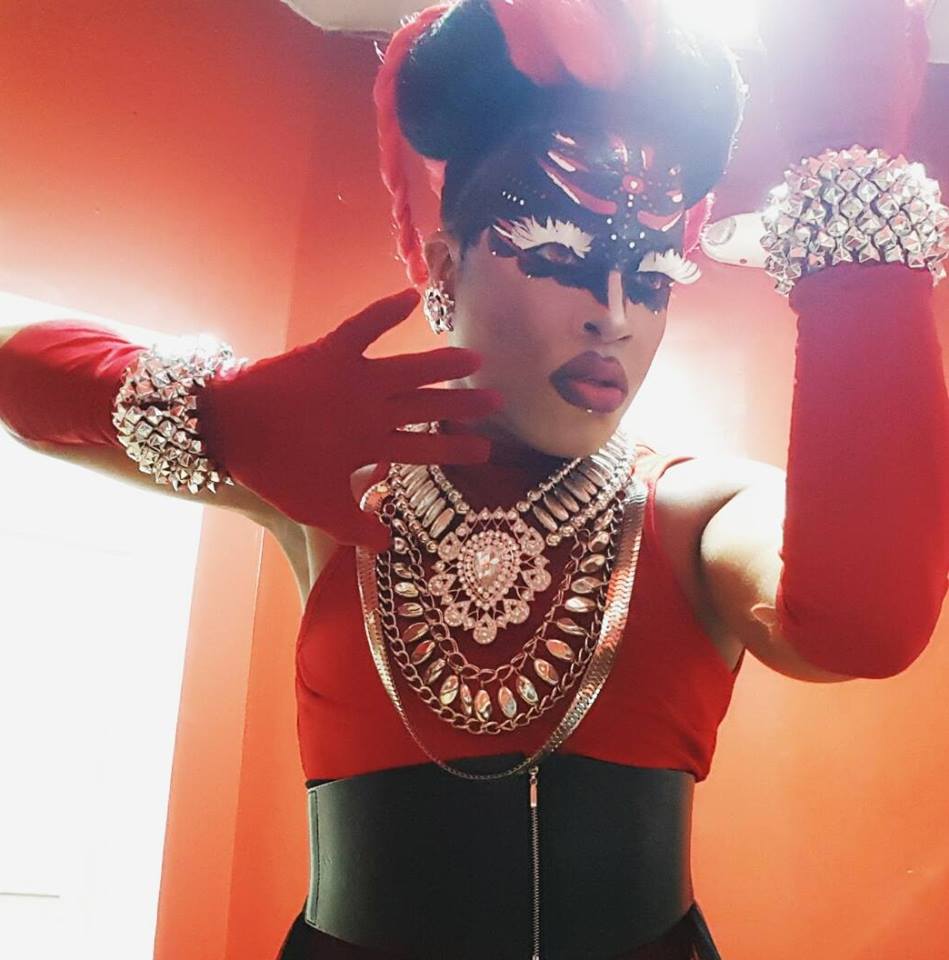 On a recent Saturday at Partners Cafe, Malaya Love Nations was two changes in, and absolutely slaying.

Where there had been long, straight hair for her first number, she’d thrown on a messy, huge red bun, nesting a gold, glittery crown in its deepest dip. Her face was a work of art: lips fattened with red and white lipstick, black pencil tracings around the outside. Around her eyes, electric turquoise tendrils rolled upward. Four heavy silver necklaces adorned her front, moving ever so slightly as she lifted her arms and vogued.

The crowd cheered as she opened her eyes wide. Bright blue and yellow contact lenses stared back, as if to say, keep watching I'm just warming up.

But Malaya Love Nations didn’t always plan on being a drag queen. Instead, she thought her fashion savvy would propel her towards the stage and runway under a different spotlight—to watch others perform before her. 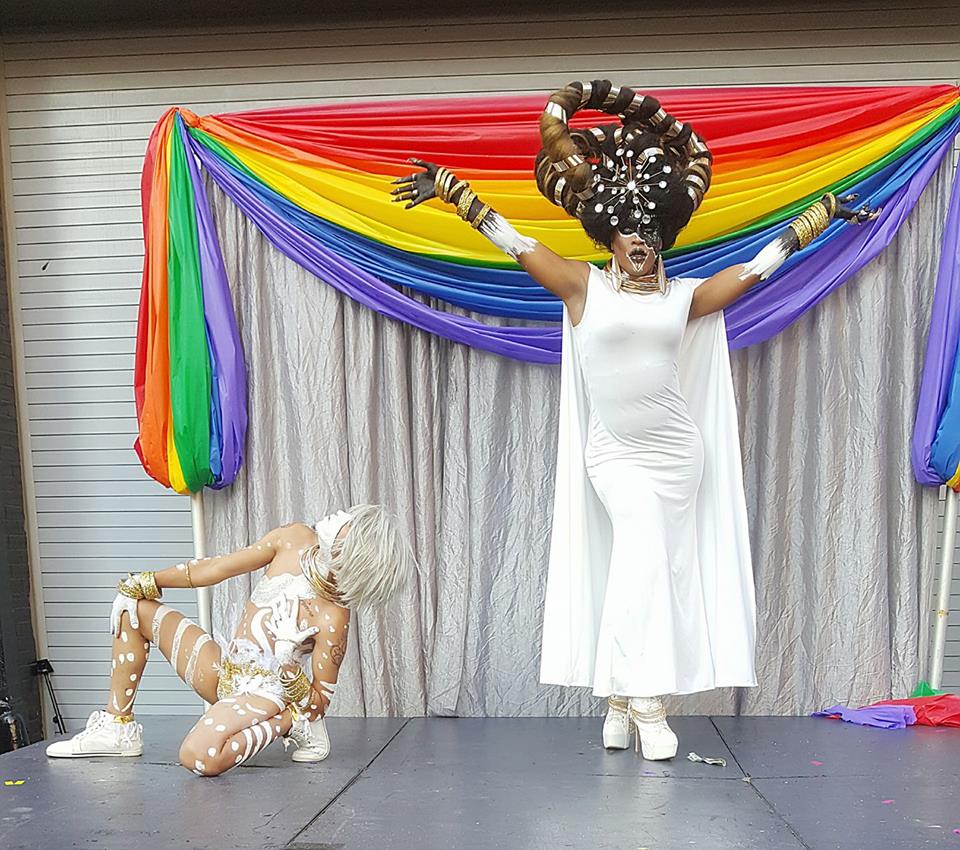 Malaya Love Nations arrived in New Haven from Puerto Rico in 1997, as a young boy named Joel Roman. Even as a kid, Roman wanted to be a fashion designer, with a captive audience watching his dresses flash and flit across the runway.

As a student at Wilbur Cross High School, he took visual arts electives, drawing in his free moments and ultimately enrolling at Educational Center for the Arts (ECA) on Audubon Street for two years of high school. With increasingly involved designs came the desire to strut too: being a model crossed his mind many a time.

“I used to model and stuff like that,” Malaya said in a recent interview. “When I was younger—8 or 9—I would put a shirt on my head and dance. By the time I was 18, I went out … I used to go to the club.”

But she, moving to pumping music as Roman, wasn’t into it. “I wanted to go partying, and they didn’t,” she recalled of her peers. “I thought: we just gonna go in circles at this club.”

And so she turned her eyes toward fashion, resolving to do some work in the industry if she could find the chance to.  She continued her drawing, scheming up outfits every time she had a moment alone with the page.

But a jobs crisis in Connecticut had other plans. In 2008, Roman and a then-boyfriend moved to Georgia looking for work. Living in the southern part of the state, they discovered a “stripper club and biker bar” called Paradise that had weekly gay nights on Saturdays. It didn’t quite live up to its name, but it was something in an otherwise quiet region, where gay nightlife was hard to come by.

Roman was still looking for work when he heard that the bar was holding casting calls for a weekly drag ensemble. His boyfriend volunteered him.

“Just look likea girl, just try it!” Malaya recalled him saying. Roman was skeptical; he didn't associate his background with drag, and didn't know how one entered that world. He hadn’t so much as thought of a drag name. His boyfriend suggested “Malaya Love,” a combination of a bubbly “Asian girl” he’d really liked in his teens, and Roman’s warmth and love for everyone around him.

Then just a drag neophyte, Malaya cobbled together an outfit for the audition, teetering in with heels and makeup. “I was so nervous,” she said. “My blood was rushing.”

But the audition went off without a hitch. Malaya Love—the Nations would come later, as she joined a sort of Nations drag dynasty—was born.

The bar’s owner asked if she could start that Saturday. Malaya hesitated: she had no costumes or makeup at home. She hadn’t done an entire performance ever. In her life. But a job was a job. She picked out a Rhianna routine and got to work choreographing the piece.

“I was like: let me like get creative with glue and stuff,” she said. “I don’t know how to sew or nothing, but I make stuff.”

Since, that’s been her approach to drag in New Haven, raising the bar for other performers with each costume change, new hairdo, and mid-show makeover. Returning to New Haven around 2011, she began attending drag performances on Center Street, where Gotham Citi was then located. She made a mark after one performance with another queen, in which she played Beyoncé to their Lady Gaga. The crowd went wild, and Malaya Love Nations found herself performing multiple times a month.

That was just the start of her place as a fixture in New Haven’s scene. She liked that other queens told her she was “different,” she said—it made her feel like she had a chance to forge a personality in a landscape that already included fishy queens, campy queens, understated queens, queens who were just figuring out who they were. So she made her mark with wild, careful explosions of makeup, neon contact lenses, and elaborate hairstyles.

“I’m like: I’m just going to do everything and use it on myself,” she said. “On my face. I don’t want to say that I’m the best one, but when it comes to being more creative, to paint on my body, I’m different.”

She didn’t forget her aspirations in fashion, which include having her own clothing line. A few years ago, she enrolled in community college courses, but struggled with her professors’ rapid-fire English and unwillingness to slow down as she worked on her language skills. After one altercation with the president (“She said speak better English, and my Puerto Rican side came out,” Malaya recalled), she dropped out, taking all the work she’d done with her.

Now, she said she’s concentrating on how her drag routines can fill that void, at least for the time being. Performing at both Partners Cafe and 168 York Street, she said she has also learned to navigate a certain racial clique mentality in the drag scene—and in its audiences.

But it has also meant changing up her routines. Audiences at Partners wouldn’t go for a hard-core hip-hop routine, she said. Sometimes the Rhianna or Nikki Menage she tried out felt like too much for the space. So she tempered them. That learning process is where she still is today, she said.

Each Friday during the month of September, The Arts Paper will be bringing readers a “Queen of the Week” in honor of the state’s month-long celebration of LGBTQ+ pride. While most states celebrate the month in June,  New Haven’s Pride Weekend falls Sept. 14-17. Our first queen was Robin Banks; the second was a celebration of multiple queens at Partners Cafe.  To learn more about LGBTQ+ life in New Haven, check out the New Haven Pride Center (NHPC)