Queen Of The Week: Robin Banks 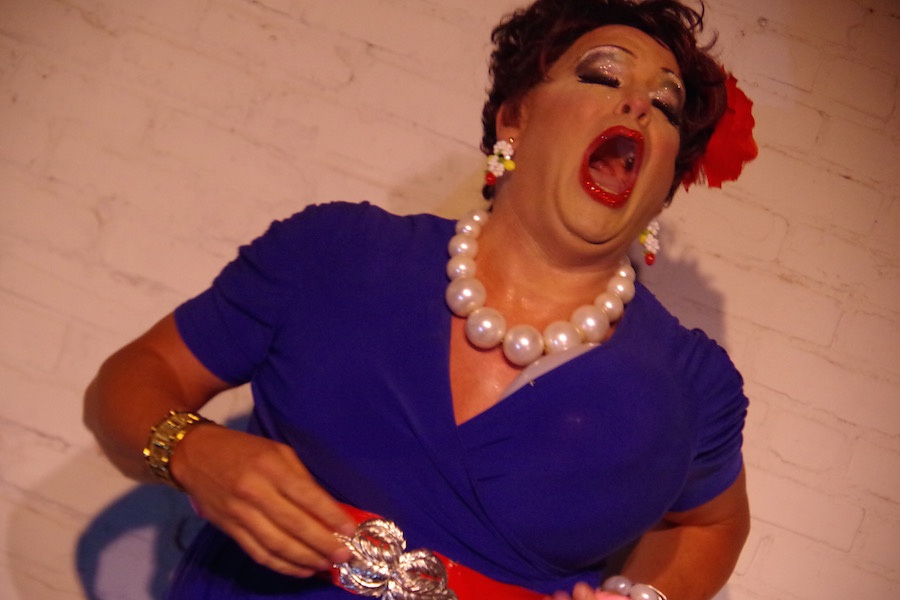 On a recent Saturday night at 168 York Street Cafe, Robin Banks was on top of her game.

She had introduced other queens, turning the glitter-caked O of her mouth into a wide, bright red smile. She had gotten the crowd to its feet, hollering loudly enough for friendly competition at Partners Cafe across the street to take note. Now, it was her turn to own the stage.

Neeeeaaaar, faaaaarrr, whereeEEEevver you are, I believe that my heart will go ooonnnnn, speakers blared from somewhere on the second story of the bar. The helium-flecked impression of Celine Dion covered the crowd.

On stage, Banks backed up against 168 York’s brick wall, and pulled a balloon out of her bra. The audience cheered and yanked half-crumpled dollar bills from their wallets and pockets. Banks was just getting started. 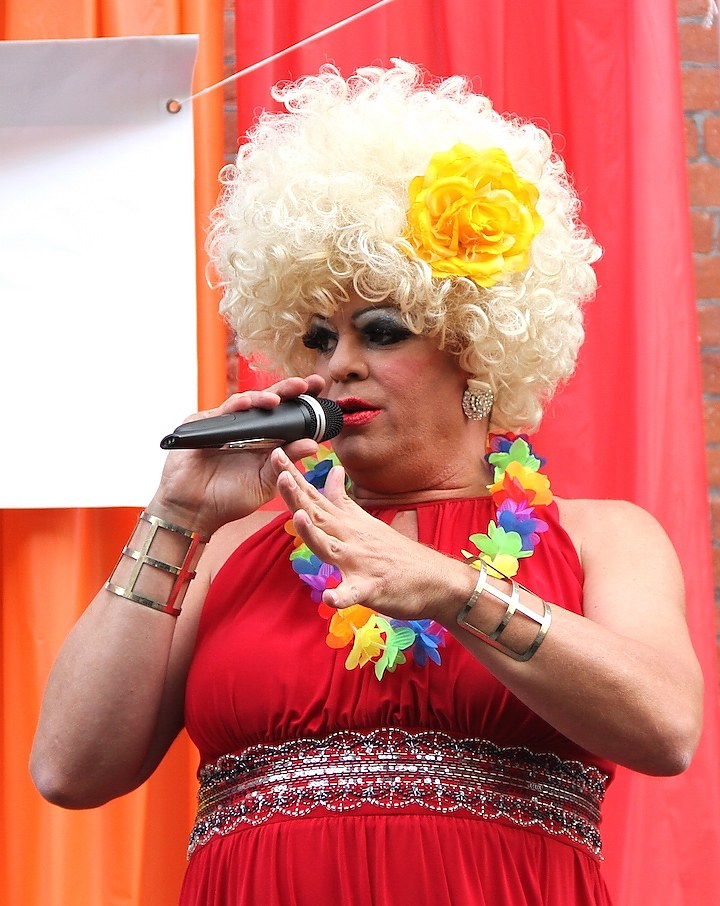 Banks at last year's New Haven Pride Parade, which she emcees each year. David Sepulveda for the New Haven Independent.

Host of the the largest drag show in Connecticut, Robin Banks is one of the city’s longtime drag queens, and now one of the most recognized for her outreach efforts and campy appearances around town. Next week, she’ll be walking in the city’s annual pride parade and celebrating September’s quirky place as Connecticut’s Pride Month.

“Robin Banks is an entertainer, an artist, and a comedian ... but what really makes her so successful is that she is a business woman,” said Patrick Dunn, executive director of the New Haven Pride Center. “She works on her craft to know exactly what works for her audience and she pushes all of us that perform with her to do the same. She has a clear brand, and her audience knows exactly what they are getting when they come to her show.”

"Beyond her artistry and being so business savvy, she genuinely cares about her community and making a difference," he added.

But Robin Banks hasn’t always been Robin Banks. Before arriving in Connecticut 10 years ago, she was Shawn Bodey—Robin Banks in boy clothes, if you prefer—an Arizona boy with a penchant for dressing up. As a scarecrow.

Born in Arizona, Bodey grew up with a mix of siblings and half-siblings. As a kid, he loved science fiction, and dreamed up imaginary friends with superpowers and an array or costumes. There was Angelica Blue, a dungeons and dragons spinoff gone rogue, and with better fashion. She had her sidekicks—Kirthan and Stella, who kept Bodey company when he needed it most.

“I spent a lot of time alone because I got in trouble a lot,” he said in an interview Wednesday evening, sipping a dark roast at Cafe Romeo. “I guess I had a vivid imagination.” 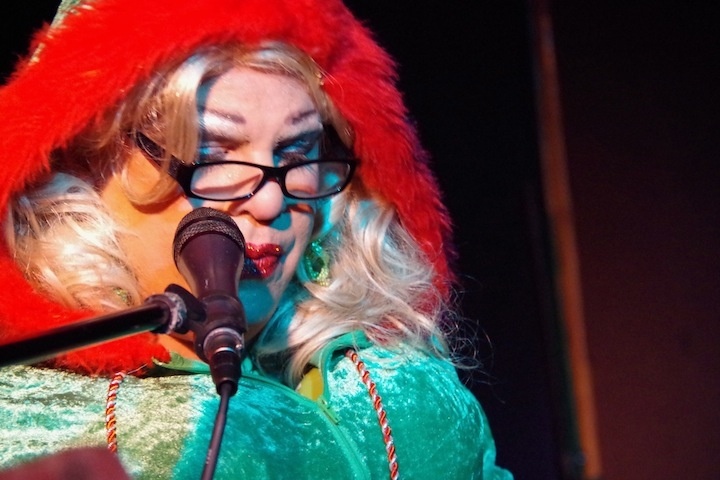 When Bodey was 13, those imaginary friends went on their own way, probably to protect someone else’s universe. He dove headfirst into a new love: costumes and costuming, and the freedom that came with slipping into another character’s skin.

In his early twenties, he started dressing as a “lady scarecrow,” adding new features to the costume each time he wore it out. “Not at all related to The Wizard Of Oz,” he noted. A few times a year, he performed in character, drawing laughs until the bit became old, and well-known around the community. Maybe it was time to retire the scarecrow, he thought. Or maybe it was time to try a new place.

In 2007, he came to Connecticut to pursue a career in comedy. New Haven was his first and only stop: he settled in a pink house on Pearl Street and befriended several of local queens, including Dandy Lions (boy name Shawn Mller), Cassandra Fiore, Morgana De Luxe (boy name Michael Morgan), and More Tissue Adams. Attending a Halloween party with Dandy, he resurrected the scarecrow, hanging miniature lanterns from his nipples and performing under the moniker “Scarecrow.” “It was cute,” he recalled.

But he was bored with the scarecrow. As he got further into the city’s drag scene, he performed in shows as Barbie Q, the barbecued barbie doll. Barbie Q was cute and quirky, and Bodey found that she could transform into a chargrilled scarecrow quickly, allowing for flexibility during shows. But Barbie Q still felt like something was missing. 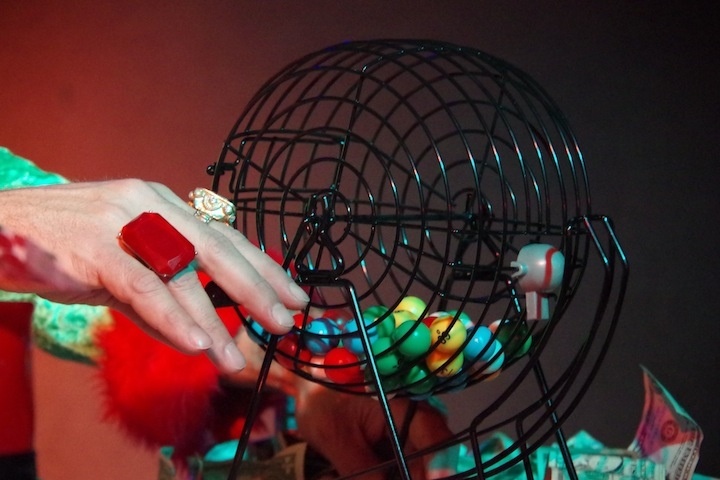 Then Bodey was celebrating Christmas with Dandy/Miller’s family. Miller’s grandmother gifted Bodey a zip-up sweatshirt for Christmas. He zipped it all the way up, scrunching the hood tight over his face. Miller joked that “you look like you’re robbing banks!” Barbie Q became history fast.

In the time since, Robin has transformed the city’s drag presence—all in the pursuit of deep, melodious laughter. In addition to her bimonthly show at 168 York Street, she leads drag bingo nights, hosts drag brunches in New Haven and across the region, and recently helped Dragapalooza bring in around $2,000 for state charities.

She also does fundraisers each year for the Downtown Evening Soup Kitchen (DESK), of which she said she is a fan.

It’s her small part in the drag community’s rich tradition of philanthropy, she added. Once a member of the Imperial Sovereign Court of All Connecticut, she donates a great deal of what she earns for others, to honor a legacy that she is now part of.

And, she said recently, she thinks of it as just getting started. In October, she’s bringing her drag show to a larger venue, and experimenting with a new television show on Citizens Television (CTV).

“I’m just trying to stay active and grow and change with the game,” Bodey said Wednesday. “If you can’t be the freshest … you’ve gotta stay on top of things. Stay current. I’m always trying to up my skill level … It takes a lot.”

Each Friday during the month of September, The Arts Paper will be bringing readers a “Queen of the Week” in honor of the state’s month-long celebration of LGBTQ+ pride. While most states celebrate the month in June,  New Haven’s Pride Weekend falls Sept. 14-17.