Every Voice Lifted, And Sung 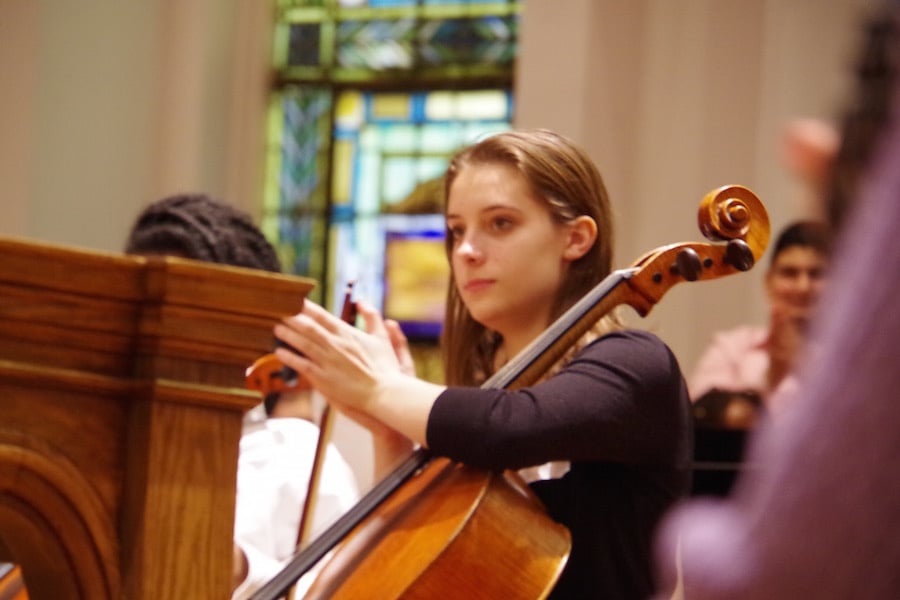 James Weldon Johnson was stirring in the heart of First and Summerfield United Methodist Church. Drums pushed out a trembling melody, rubber mallets vibrating against cool, mottled steel and bright red wrapping. Fingers inched up and down the slender, sleek necks of violins, drawing from them something both shrill and satin. From the back, a cello piped up, and then another, and then another.

Stony the road we trod,/Bitter the chastening rod,/ Felt in the days when hope unborn had died;
Yet with a steady beat,/Have not our weary feet /Come to the place for which our fathers sighed?

Monday afternoon, Music Haven and St. Luke’s Steel Band played their eighth annual Martin Luther King, Jr. Day concert, a tradition that started when the groups’ offices were still beside each other on Whalley Avenue. Held for the first time at First and Summerfield Church on Elm Street, this year’s concert centered on composers and community, and the exquisite, euphonious meeting of the two. Close to 300 people came out for the event, leaving latecomers standing in the back. 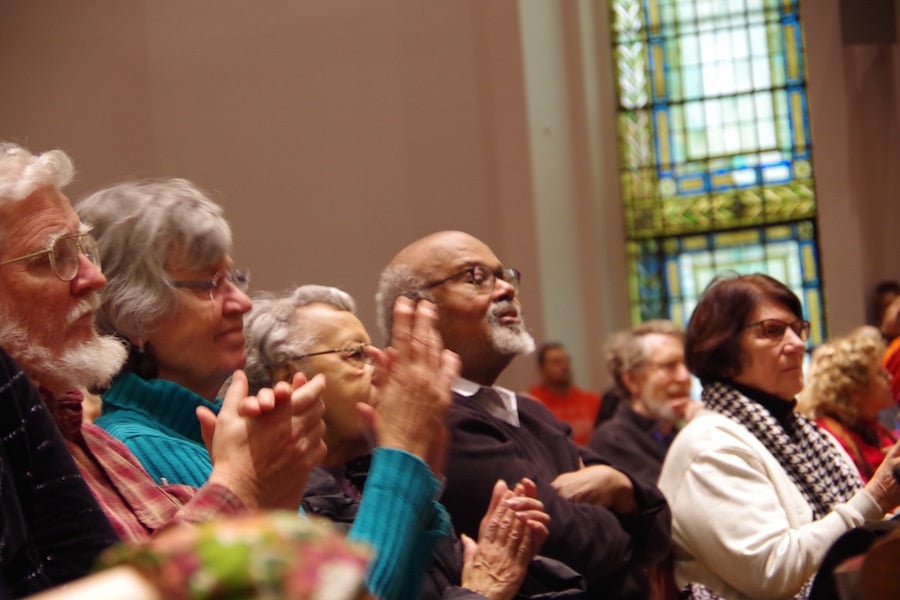 A packed house turned up for the event, which brought in close to 300. Lucy Gellman Photos.

In years past, the event has been about oration as much as the marriage of steel and strings. Invited speakers have included U.S. Sen. Chris Murphy and Enola Aird, or in-house tributes to Martin Luther King have come from students and teachers, often building on quotations with which King left the world when he was snatched from it.

But as attendance has multiplied by the hundreds, the concert has outgrown its original home of St. Luke’s Church on Whalley Avenue, and then Christ Church on Broadway, and tradition has come and gone with each new location. This year, both groups—led respectively by Mandi Jackson and conductor Kenneth Joseph—decided to cut the speechifying, and focus in on the music.

For the first time this year, 12 students from Bridgeport’s Music for Youth program and Music Haven’s “Music Bridge” class of young refugees also participated in the program. 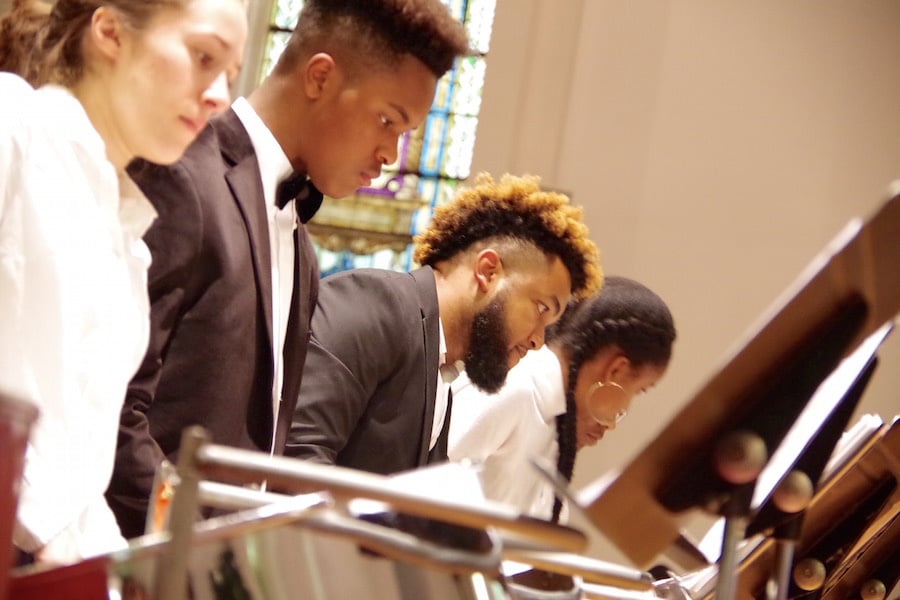 Joseph (second in from left) said he's inspired to perform the song "Ordinary People" because that's ultimately what they—and we—all are too.

Jackson and Joseph said they wanted to maintain an eye toward service, including a short awards ceremony during which Al Lucas, Kevin Walton Sr., and Dr. Marlene Baldizon were presented certificates of recognition from students in both St. Luke’s Steel Band and Music Haven.

Lucas is the director of legislative services for the city’s Board of Alders, but also serves widely in the community, with decades-long service to the Zeta chapter of Alpha Phi Alpha Fraternity, Dwight Hall at Yale, Yale’s Afro-American Cultural Center, and the city’s Young Voices Initiative and once-robust New Haven Midnight Basketball Association (click here for more).

Walton is not only an HR Specialist and Minority Teacher Recruiting Coordinator for ACES in North Haven, but also a champion of storytelling in New Haven, where he spearheads a monthly event at ConnCAT with his wife Karen DuBois-Walton. 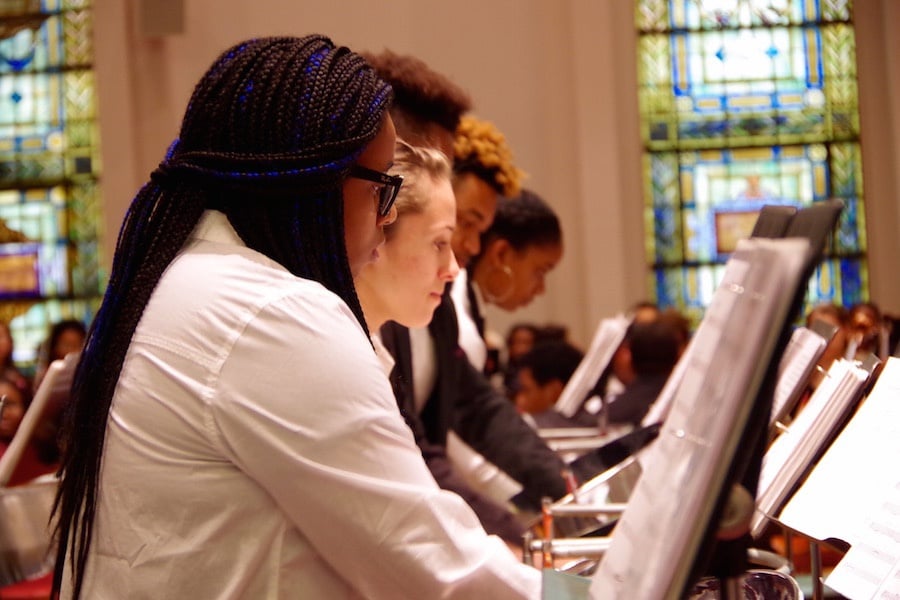 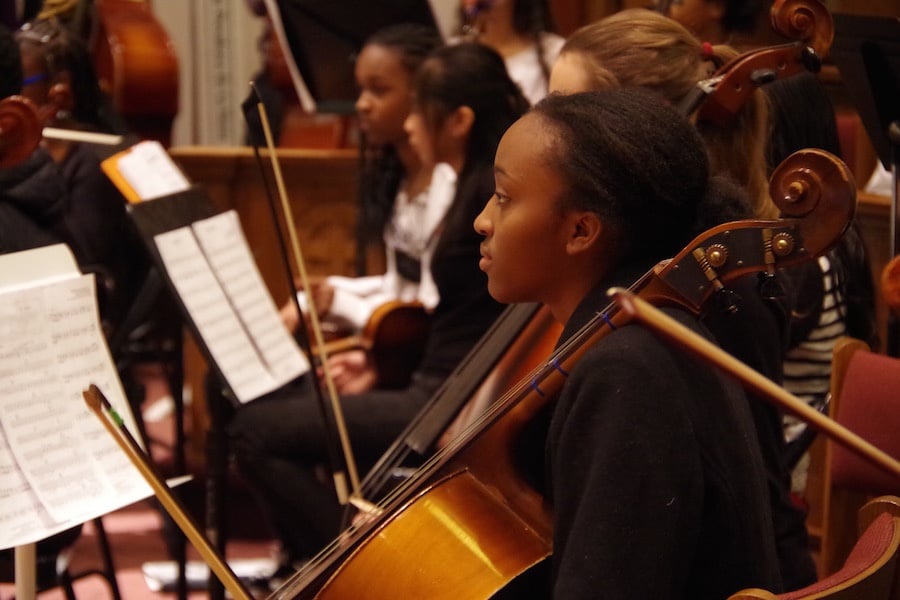 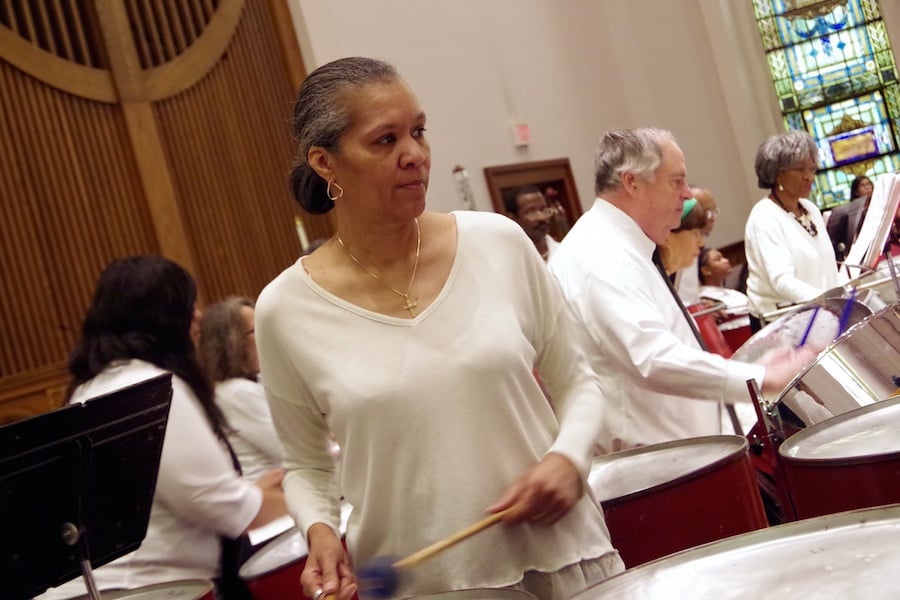 Handing awards out between numbers, members of both groups focused in on the music, a tight hour-long set that included work by contemporary composer Charles Washington, as well as steel band arrangements of John Legend, R. Kelly, James Weldon Johnson, Bill Withers and even John Newton.

Some pieces are in St. Luke’s wheelhouse, like Legend’s 2004 “Ordinary People.” Made buoyant with propulsive, sure percussion and raindrop-like steel, Legend’s words were transformed, sound waves bouncing jubilantly towards the audience. 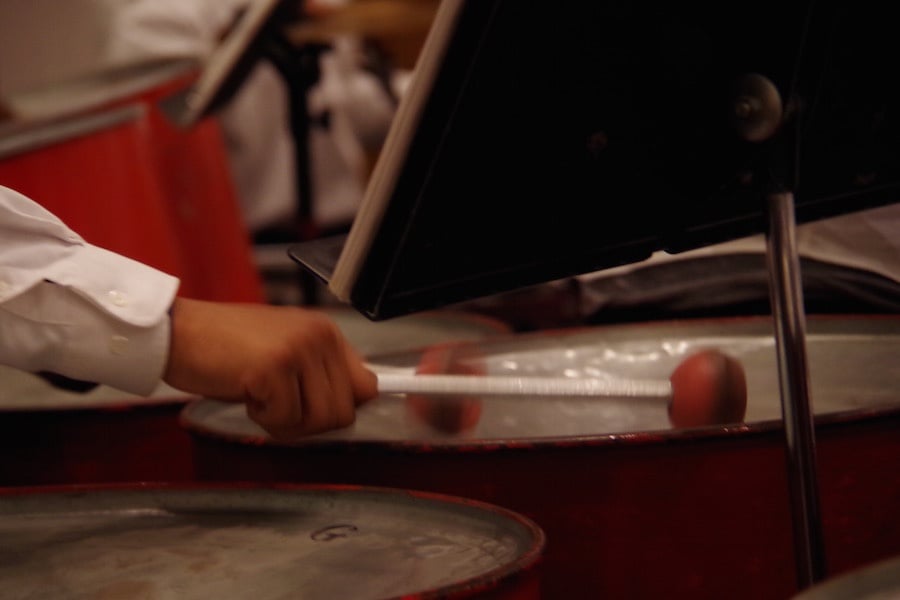 And yet, it took on new meaning as Music Haven student Robert Oakley, in one of the only direct King references of the afternoon, reminded attendees that “Everybody can be great. Because anybody can serve.” In other words, ordinary people can get the job done just fine.

Other pieces struck as unexpected, and just when the audience needed them most. Played to hush the house, an arrangement of Newton’s “Amazing Grace” began throaty and full, as if a choir was behind the musicians, waiting for a cue to peek out in their robes and deep voices. An echo clung to the words “I’m free,” hanging in the air as if someone had replaced it with “I’m free, Iiiiiimmmmm freeee!” The strings mellowed, warm and velvety, like melted chocolate.

Then they ceased for a moment. You could have heard a pin drop on the sloping, pink-red carpet and wood floor of the church. Until a steel drum came in, clear and decisive, almost calling out Ba buh da da duh/Ba buh da da duh to the group. The steel band sprang to life, carrying a strong beat as strings joined back in with a lot more pep in their step.

Or Washington’s masterful “Midnight Child,” performed by the Haven String Quartet. A take on the widely performed and adapted spiritual “Motherless Child,” it incorporates folk and jazz rhythms into a deep, time-hopping aural patchwork. It is a song that catches the ear off-guard, mournful and celebratory at once, urging you to rise and move until it dips back into depths of despair.

Ultimately, the two groups did keep one tradition: ending on Johnson’s powerful “Lift Every Voice and Sing.” From the front of the church, Joseph urged audience members to whip out their phones if they didn’t know the lyrics by heart. Jackets rustled around the room. Hands dipped into pockets and purses, a few phones sending out quick flashes of light as they came to life. Neighbors shared with neighbors, the band only beginning when audience members stared back, their faces set with expressions that seemed to say Okay. Let’s do this.

Joseph motioned for the audience to stand. Then he turned back to the musicians, strings ushering in steel.

Ba baaaah ba baaah ba baaah, the violins sang out. The drums answered right on cue. In 300 different voices and register, attendees launched into the poet’s words, mouths wide with the strike of each drum, the back and forth of each bow.

Lift every voice and sing,/Till earth and heaven ring,/Ring with the harmonies of Liberty;
Let our rejoicing rise/High as the list’ning skies,/Let it resound loud as the rolling sea.