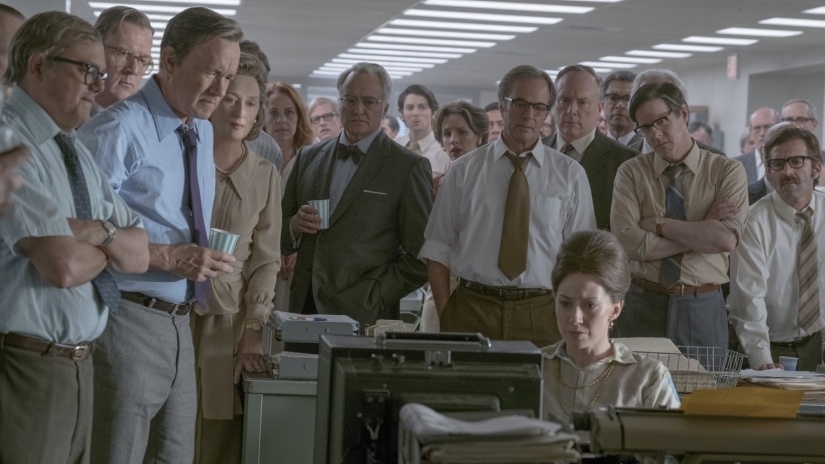 Does America need a big, dumb love letter to the First Amendment at a time when its big, dumb president is hell bent on destroying the free press?

I’d be into that.

But does Steven Spielberg’s The Post offer anything more than self-congratulatory, overly simplistic, and perhaps even incipiently anti-democratic pablum?

Well… yes and no.

The Post tells the story of the 1971 debate within the editorial and business ranks of The Washington Post about whether or not to publish stories based on the Pentagon Papers, a trove of top secret documents that outlined decades of bipartisan executive branch decisions to keep the U.S. engaged militarily and politically in Vietnam.

The documents revealed that the primary reason for the country’s sustained involvement in Southeast Asia was to stave off the national embarrassment of defeat at the hands of a small, Third World country located halfway around the globe. No larger strategic goal, no vision for a quick and easy victory necessitated such loss of blood and treasure. Just pure, cynical ego.

This is exactly the type of historical Manichaeism that Spielberg is drawn to. There are good guys and bad institutions; simple, courageous, hardworking men and women, and the tangled, deceitful, bureaucratic inertia that they must overcome. Perhaps the U.S.’s involvement in Vietnam is not as simple as a Spielberg movie would hope, but the revelations from the Pentagon Papers sure made it look that way.

The movie opens with Daniel Ellsberg (Matthew Rhys), a curly-haired military analyst deployed deep in the Vietnamese jungle who observes firsthand just how confused, violent, and static the war continues to be. He is one of the good guys.

Dutifully set to Creedence Clearwater Revival’s “Green River,” the sequence lacks the chaotic propulsion and individuating precision of some of Spielberg’s more breathtaking opening sequences, such as Saving Private Ryan’s Omaha Beach landing or Amistad’s slave ship revolt, but it at least establishes up front the stakes of the story: the U.S. is sending thousands upon thousands of young men each year to fight and die in Vietnam. Why? For what?

Disillusioned with the war and the cheerful lies of progress perpetuated by his boss, Secretary of Defense Robert McNamara (Bruce Greenwood), Ellsberg decides to leak a classified, Petagon-funded history of the war to the New York Times, and then, when the Nixon administration goes to court to stop the Times from publishing, to the Washington Post.

After those first five minutes in the jungle, Spielberg’s movie barely sees the outdoors again. The rest of The Post follows the backroom deals, political power plays, and direct and indirect persuasion undertaken by Post editor Ben Bradlee (Tom Hanks) to try to convince the paper’s publisher Kay Graham (Meryl Streep) to defy the Nixon administration’s injunction, to risk going to jail and scaring off the financial backers of the paper, by publishing stories based on the top secret documents. Bradlee sees an opportunity to bolster the Post’s reputation as a beacon of the freedom of the press, as a worthy competitor to the international juggernaut of the New York Times.

Like Lincoln and Bridge of Spies, The Post is very much a movie about process, not substance. In Bradlee, Spielberg finds a reliable, gruff hero who knows his job and does it well, particularly in the face of lawyers and bankers. Whatever interest the movie may have had in the endless war overseas, or even in the lies and cover-ups at home, is quickly forgotten in favor of celebrating crusading journalists who must make (and must convince their bosses to make) one simple, moral decision: to publish or not to publish.

But this is no All The President’s Men or Spotlight, interested in the nitty gritty work required by muckraking journalists who go out into the world to find the story, interview sources, empathize with their victimization and struggle to piece together the complicated abuses of power that emanate from the top of society.

Rather, this is a movie about high-profile, glamorous, important good people trying to duke it out with the spectre of high-profile important bad people. History is created by a select few, the Ben Bradlees and Richard Nixons and Kay Grahams of the world, the movie seems to imply. We the audience should just hope that those big good guys beat out the big bad guys more often than not.

I hate to be so cynical about this depiction, because I think that there is a lot of earnest good will in The Post. In particular, in the way that Spielberg demonstrates just how isolated Graham is in the hypermasculine professional environments of news, finance and politics. Whenever she walks into a room, invariably she is a lone dress in a mass of anonymous black suits. Men never fail to condescend to her, question her power, deride her intelligence both behind her back and in front of her face.

Some of the most powerful images in the movie come from this feminist-conscious storyline, however laughably beatific some of those images may be. I’m thinking in particular of the moment when Graham leaves the Supreme Court after the first hearing on the legality of The Post’s decision. She walks down a side stairwell, past the male New York Times publishers who are being peppered with questions from journalists, and into a silent, awe-struck group of young women who have come out to show their support and admiration for this crusading female publisher.

I’m not quite sure where those women came from or why they aren’t saying anything, but Spielberg certainly knows how to craft an evocative and emotionally resonant image, and that one of silent, communal support certainly did choke me up.

But in the end, this movie is too full of heroic, low-angle shots and blindingly-bright lighting to imply anything more nuanced than that these great people are destined to make great decisions, and we the public should be grateful. Ellsberg and his courageous decision to leak the papers in the first place are dropped, the interminable war and loss of life overseas are all but forgotten, and instead we are left with newsroom heroes who stick it to the man to the benefit of freedom and America and all of us in the public who get to watch, helpless and appreciative.

Click on the audio player below to hear a review of The Post on a recent episode of WNHH's Deep Focus.