One Year In, A Call For Action 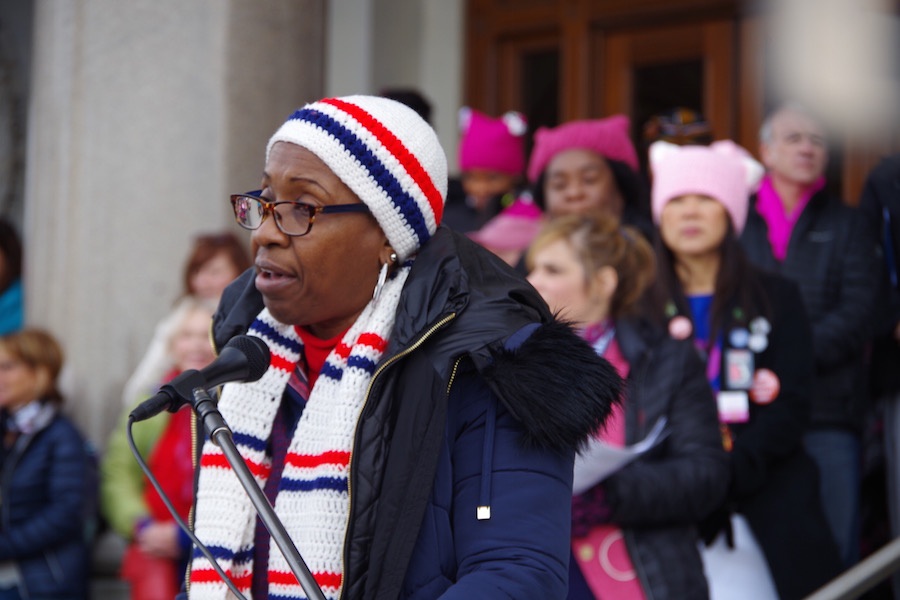 State Rep. Robyn Porter had to pray on whether or not to speak at the second annual Women’s March. The offer piqued her interested, but she’d also heard from many of her Black and Hispanic constituents about why she should turn it down.

Women of color had built resistance movements from the ground up, they said, only to be left out of their subsequent leadership. Why would this be any different?

Ultimately, she decided it had to be—and dedicated her words to that. Amidst a government shutdown Saturday, Porter was one of thousands to call for sustained and heightened political action—and for white women to support communities and candidates of color—at the first anniversary of the Women’s March. One year in, marchers, speakers and program organizers asked not only for a unified movement, but one with greater intersectionality, giving Black, Latina and trans women credit for the leadership they have given.

Ten thousand people from throughout Connecticut attended the event, which included a one-hour march and three-hour speaking program at the State Capitol and surrounding capitol park.

Carrying bright, glitter- and marker-covered handmade signs and chanting “Hey hey/ho ho/Donald Trump has got to go!,” “We Want a Leader, Not a Creepy Tweeter,” and “Ahora ora ora es!,” attendees wound up Capitol Avenue and Trinity and Asylum Streets, making their way to the steps of the capitol building. Among them were women like Jessica Poland, an immigration activist who works with CT Latinas in the Resistance.

In the past year, Poland said, she has watched as Immigrations and Customs Enforcement (ICE) cracks down on immigrants and families who have been in the United States for decades. She has seen recipients of the Deferred Action for Childhood Arrivals (DACA) program shrink back from their social lives, afraid that they will be deported. She said she hopes to see women and men continue to step up as allies in the next year, as that crackdown on immigration continues. 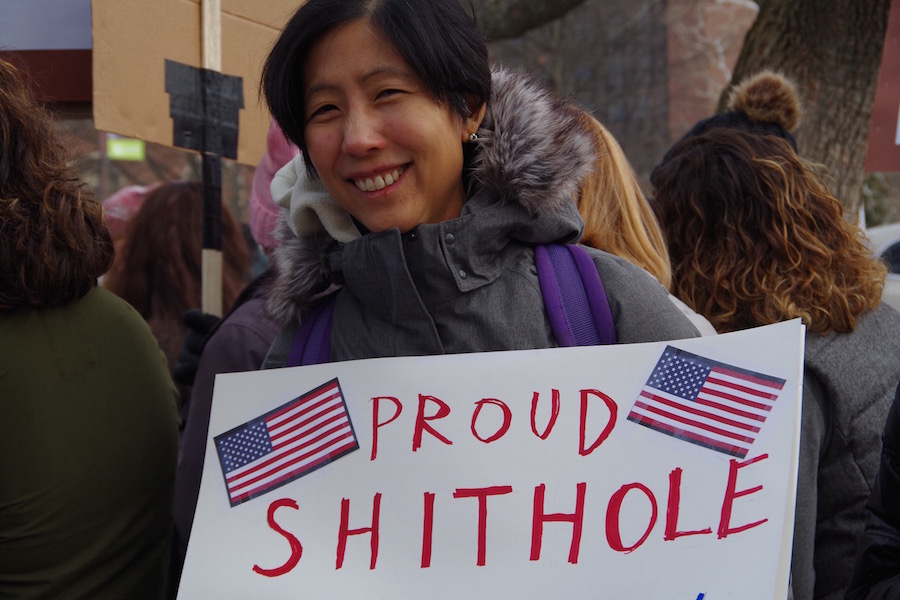 Or Tina Lu, a professor of Chinese Literature at Yale. Around her neck hung a placard that read “Proud Shithole American,” referencing Trump’s comments on Haiti, as well as several countries in Africa, earlier this month.

“I want to make sure that I claim patriotism for the left,” she said. “I’m a shithole American! I’m marching for my family. I’m marching for the future of this country. Democracy is always a work in action. The key word there is work. We all have to pull together to make sure we get through this.”

With her children and thousands of chanting women behind her, Lu made her way up Capitol Avenue, through Hartford’s large brick gateway, to the steps of the marble- and gold-adorned Capitol building. There, Porter was waiting in a jam-packed lineup of speakers from state legislature, grassroots organizing groups, labor unions, and nonprofits including Planned Parenthood of Southern New England, Connecticut Alliance to End Sexual Violence, Newtown Action Alliance, and the Connecticut Women's Education and Legal Fund.

Sharing the podium with State Sen. Beth Bye, Porter nodded avidly as Bye outlined the need for 42 more women in the Connecticut legislature (that’s the number it would take to get to 50 percent female representation) quoting Fannie Lou Hamer’s lament that she was “sick and tired of being sick and tired.” Then Porter took the mic. 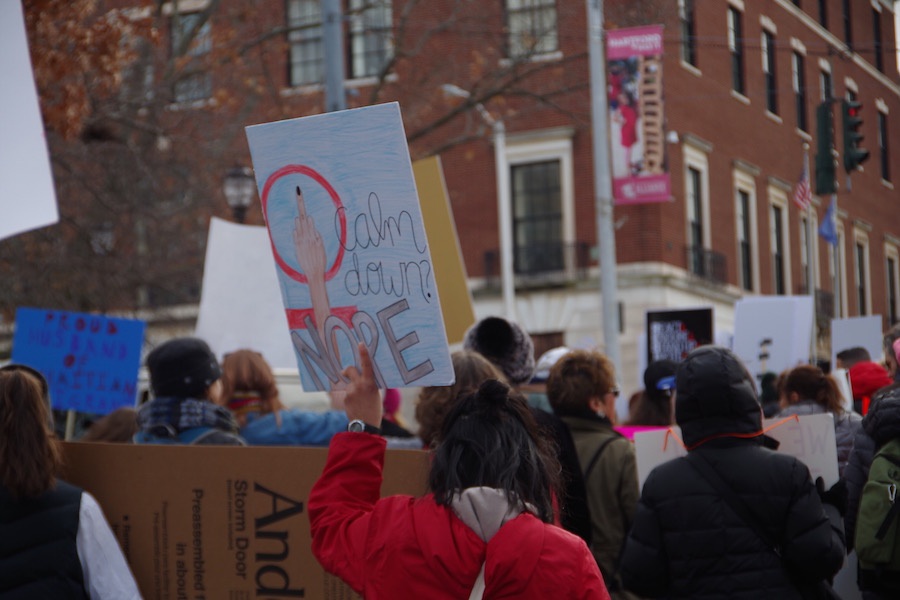 But as she echoed calls for women to run for political office, organize campaigns, and get out the vote, Porter steered the discussion “to speak to you today on behalf of the Black women who felt left out and left behind … whose voices have not been heard and whose voices have not gotten staunch support from white women.”

“This movement, and so many others, were birthed out of the bowels of Black women,” she said, drawing cheers of “Preach!” and “Say it!” from the audience. “We have been at the table, planning the menu. The table has been set by us, for us. And when we led, white women didn’t show up for us.”

She outlined a series of issues that uniquely affect Black, Latino and Native American communities, such as maternal and infant mortality, police brutality, mass incarceration, gang violence, unemployment, voting rights, education, HIV/AIDS, the war on drugs (“a.k.a. the war on Black people”) and the heroin epidemic. Speaking directly to women of color about her ultimate choice to attend and speak, she continued.

“It is crucial that people that look like you and have experiences like you not only have access to power, but they also have access to the mic,” she said to cheers. “For us, the denial of our people and our plight is deja vu. It’s nothing new. And it’s time for a reckoning and a change.”

Porter, whose speech ended with chants of “Black Lives Matter! Black Lives Matter!” from the crowd, set off a sort of chain reaction, several would-be mic drops bounding over the crowd even as it began to shrink. One after another, speakers reminded attendees that, in the words of    State Rep. Hilda Santiago, that “we are strong as long as we stand together,” and stand up for minority communities specifically.

That message resonated for activist and March co-organizer Cassandra Martineau, she said, as she told the audience that the future of women’s political resistance depended on the “principles of radical inclusion” on which the initial Women’s March on Washington was built a year ago. From the crowd, women leaned in, a “Trans Lives Matter” sign bobbing toward the middle of the crowd.

Last January, Martineau had gone to Washington, D.C., marching with a rainbow flag in a pussy hat. She’d cheered in the streets, and felt rejuvenated with friends as she headed back to Connecticut afterwards. But then she started hearing critiques of the very pussy hat she wore—and wanted to hear them out.

“I will never forget the sea of hats cheering on women of color, Muslim women, immigrant women, and trans women,” she said. But she knew that the pointy-eared, knitted pink design didn’t represent all shades of genitalia, or all women’s genitalia in general. The activists had a point, she said. A big one.

“Women of color and trans women have had, at best, a shitty relationship with white, cis feminism,” she said. “There’s a history of exclusion and agenda setting that serves some better than others. We still have problems with racism, transphobia and misogyny that must be addressed if we progress in a real, productive and generally unified way.”

That message echoed for labor activists, immigrant rights organizers, and advocates for reproductive justice and anti-police brutality. Several speakers called for #JusticeForJayson, spending their few minutes at the mic to denounce the death of Bridgeport teen Jason Negron at the hands of police. Shaking her fist as she gave a full-lunged speech about the world’s “first concentration camps”—Native American reservations, slave plantations, and centuries of sex trafficking—Hartford City Council member Wildaliz Bermúdez declared that “Enough is enough!” 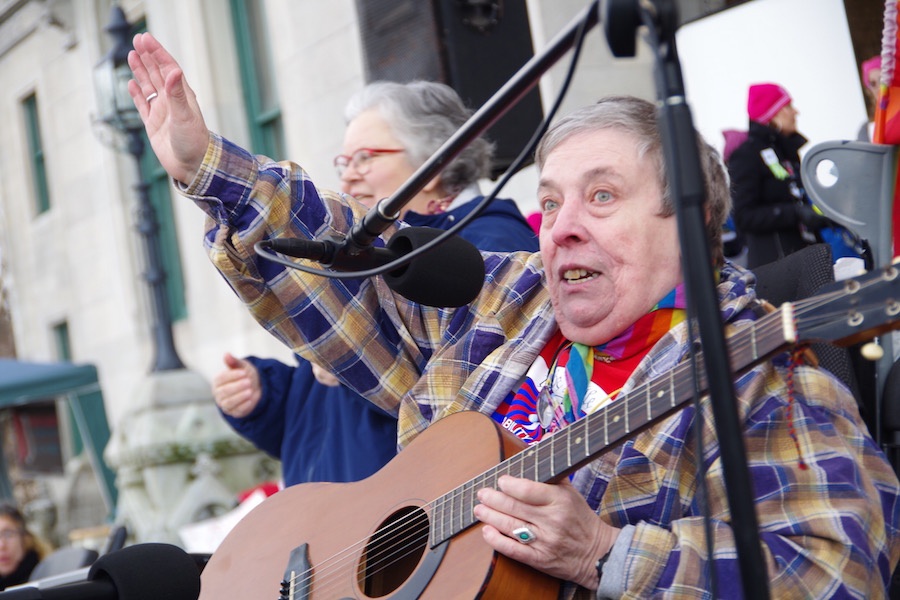 From her wheelchair, New Havener Elaine Kolb cautioned the crowd not to leave disabled Americans—“we are not the minority, we are the majority,” she said—out of the conversation.

“What’s going on in this country and this world is horrible, but for some of us it means our lives are immediately in danger,” she said. “This is not just a political exercise for some of us. It is literally life and death. And that’s how it is for a lot of people who don’t even know that it’s true yet.”

Speakers did agree that with that eye toward inclusion, many future Women’s Marches are well within reach. Taking the mic, Nasty Women New Haven co-founder Lucy McClure pulled the conversation back to social justice, calling for a unified front.

“In an ideal world we wouldn’t need Nasty Women. But we need them now more than ever,” she said. Earlier in the day, she'd explained that her own story reflects that—a mother of two from Brazil, fighting for immigrant and reproductive rights through her photography. “Thank you for allowing me to share my voice. May each one of you have the same opportunity to have your voice be heard.” 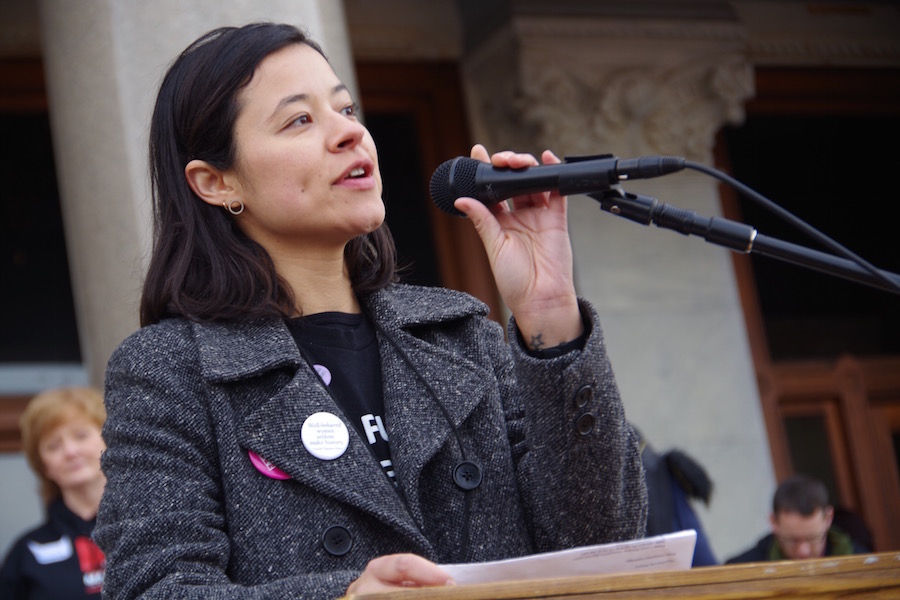