Stories From The March 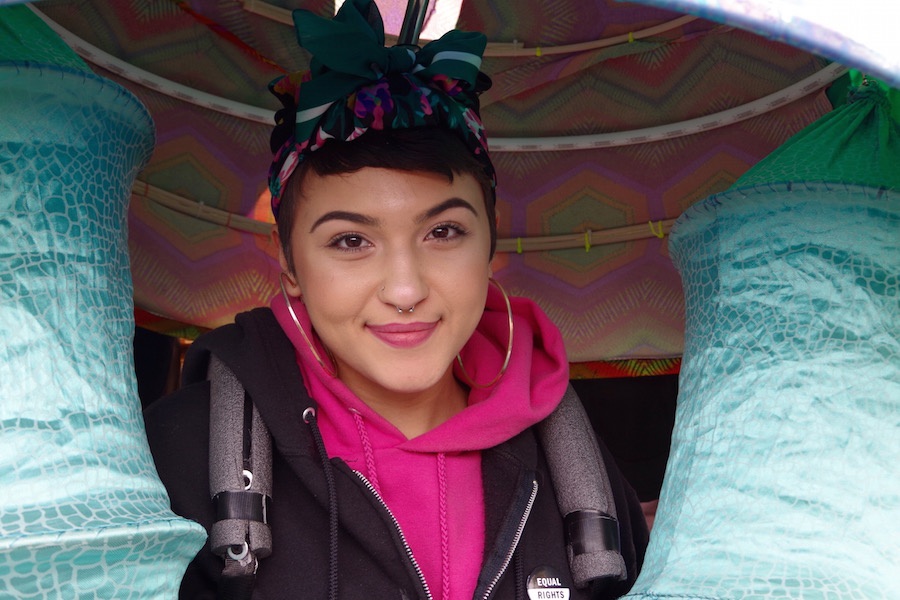 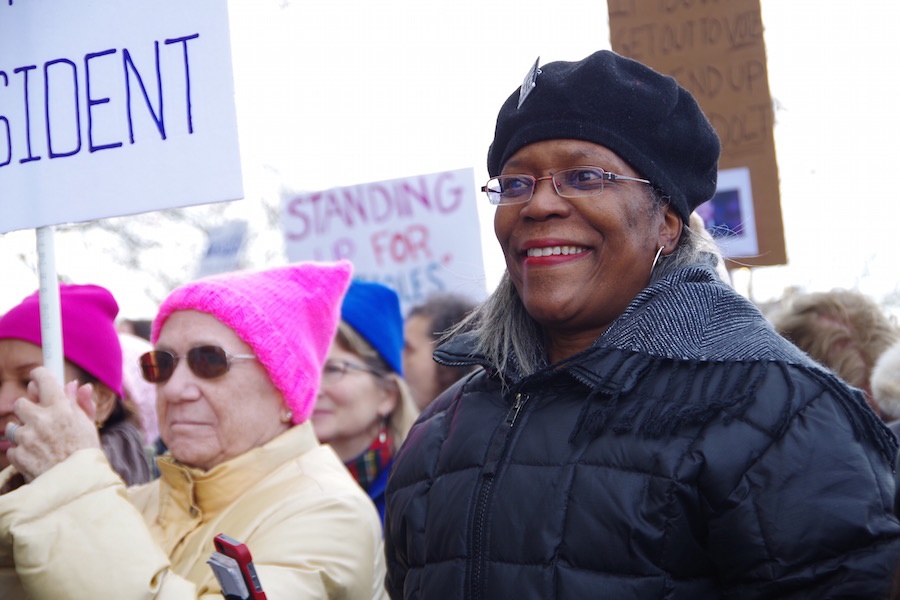 They walked, and they drove, and they bussed in, and they wheeled. They brought their kids in strollers and by foot. They spoke and they sang. They wore black pussy hats because pink ones didn’t reflect their genitalia, or they didn’t wear pussy hats at all. Whatever corner of the state they were coming from, they got there.

In an article Saturday night, The Arts Paper covered the overarching message of the march: a broad call for intersectionality that included advocates for social, racial, and reproductive justice, paid family and medical leave, women’s political leadership, and environmental conservation.

Here is a second, with the stories of some more of the women who spoke, came to march, and cheered from the crowd for an epic three-hour speaking program. 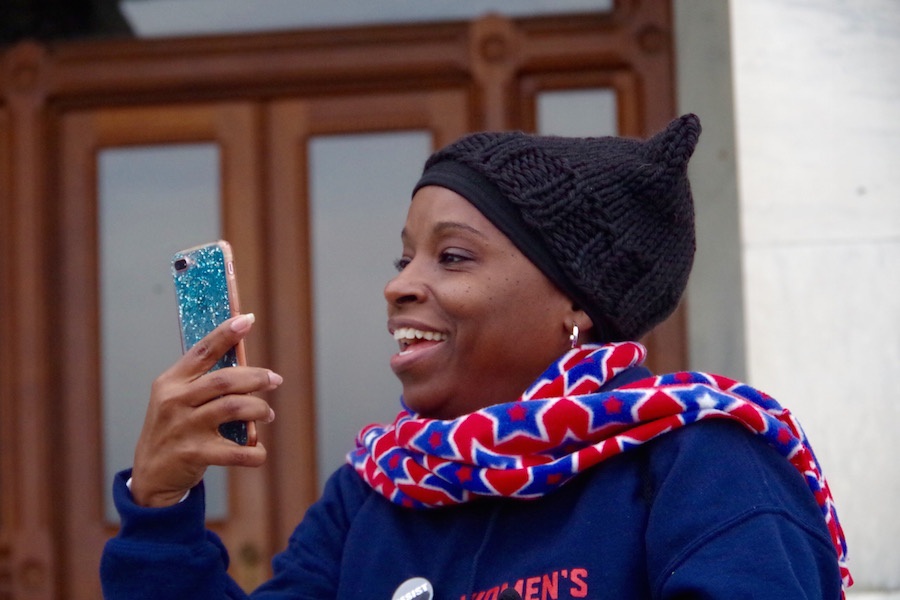 “I am marching in solidarity of all the men and women so that we can come together on a platform of equality and justice. Just to send a message to the White House that we stand in solidarity, we’re gonna resist, and we’re going to make change.”

“My number one issue is equality, and equality of people of color. It’s very important to me because I’m a woman of color, and I believe in justice for all. Regardless of the color of your skin or your gender.” 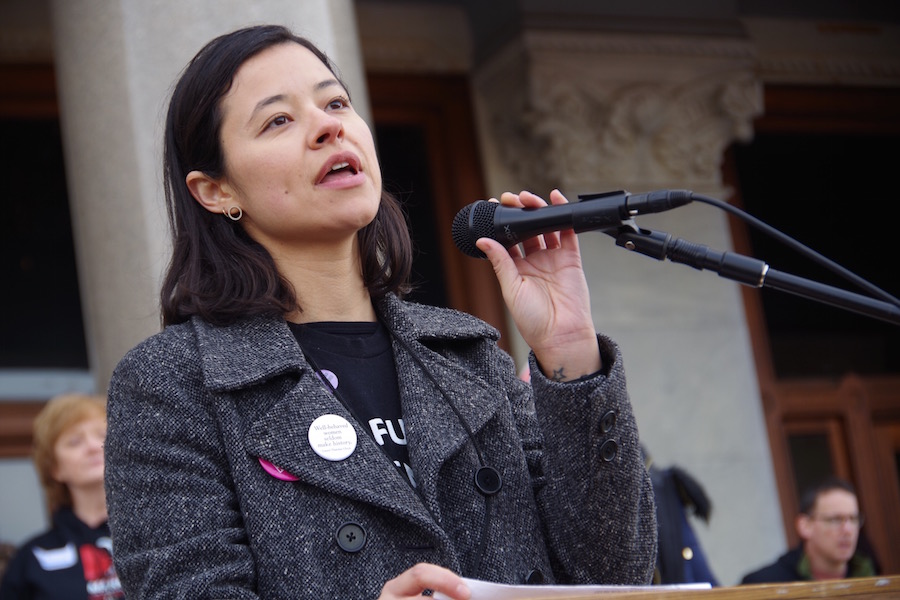 “We left Sao Paolo [in 1999] because it was getting very violent. I remember my mother coming into my bedroom and saying, ‘hide and don’t say a word when robbers came into the house.”

“I know how hard it is … Once I became a mother, I realized that everything in my life would affect these little things. That’s why I do everything I do. I’m a little idealistic. I’m a little humanitarian. I love a good cause."

“We sometimes forget that the arts have an unique voice.  It is a voice that has the power to connect with every single person.  It transcends language, religion, culture, and gender.  Art transcends our differences.  Art unifies us …We will continue to create a platform that allows for people everywhere to have a voice while using the arts as a vehicle of communication.”

“In an ideal world we wouldn’t need Nasty Women.  But we need them now more than ever. Thank you for allowing me to share my voice, may each one of you have the same opportunity to have your voice be heard.” 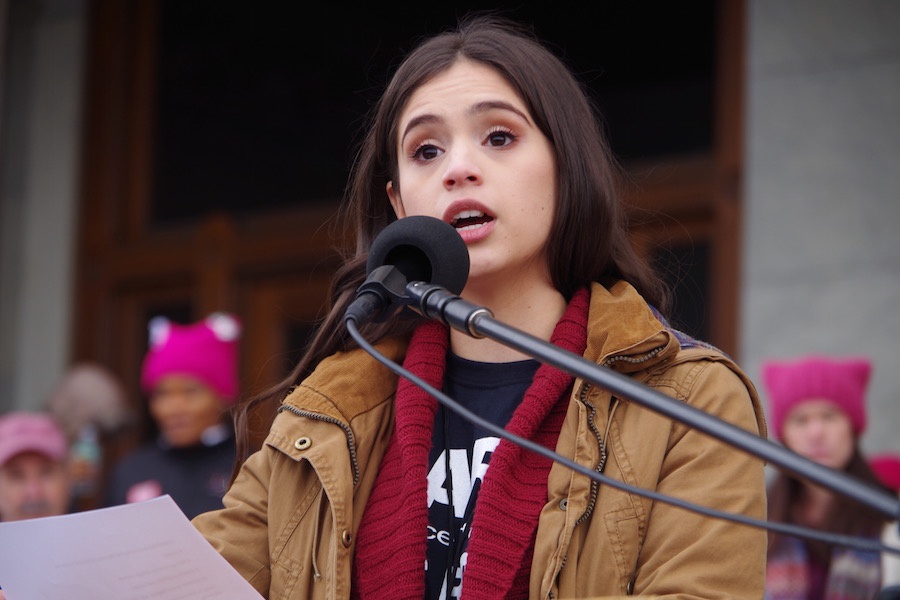 “We almost never see an officer charged in situations like this. But we can unite to call for an end to police brutality that is taking the lives of our loved ones. Let’s let Jayson’s life stand as a mark that Mike Brown, Sandra Bland, Philander Castile, and so many others should be with us today.”

“This situation stands with me because he’s my brother. But so many other brothers and sisters and mothers are facing the same issue. I call on all of you to really take action, and not just stand on the side and watch this become another story.”

“A couple people from Nightfall are here with me today. We thought Mother Earth [on her shoulders] was a great representation of everything happening with women. Mother Earth is super all-encompassing, it’s about the earth that we live on, but also the woman herself. Not only the woman, but the woman, that the place that we’re living is super all-encompassing. We just thought that it was a perfect time to bring her out.”

“This past year has been tough. To be trying to be a woman and be an artist at the same time is super challenging. I have a short haircut, and I’ve gotten asked numerous times what my pronouns are, or who I think I am for having short hair, or if I’m a boy. Just to be here [today] and feel the energy is charged. It’s super important for us to take charge of who we are. Because we are who we are.” 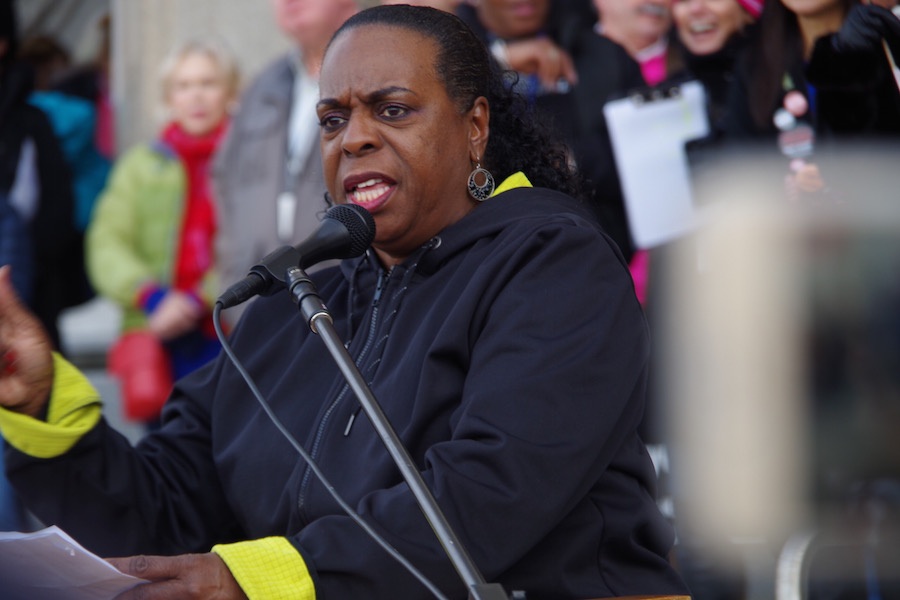 “I want to tell you. You’ve got to show up at City Halls, you have to show up at the legislature like you show up here … make no mistake. It is women that must move the political agenda and protect our planet. We must run for office. We must work in every political campaign. We must support women candidates and make sure that our sisters have our back.”

“Women can change pain sick leave. If we cannot convince those that are in office to do it, every two years there are job openings at this capitol and at city hall, and every town and city across the state. Run for office. If people don’t support our agenda and we gave birth to you, then what are you doing in office?” 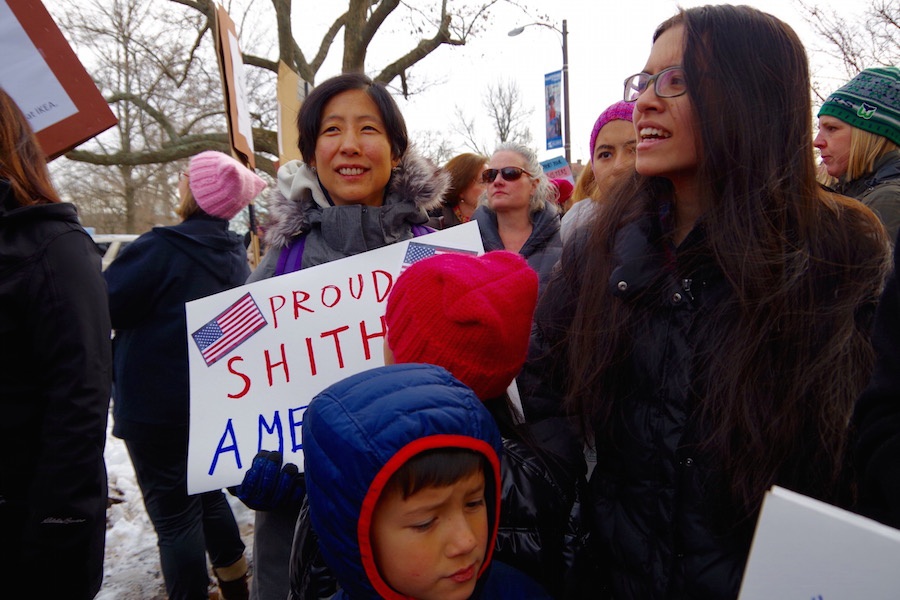 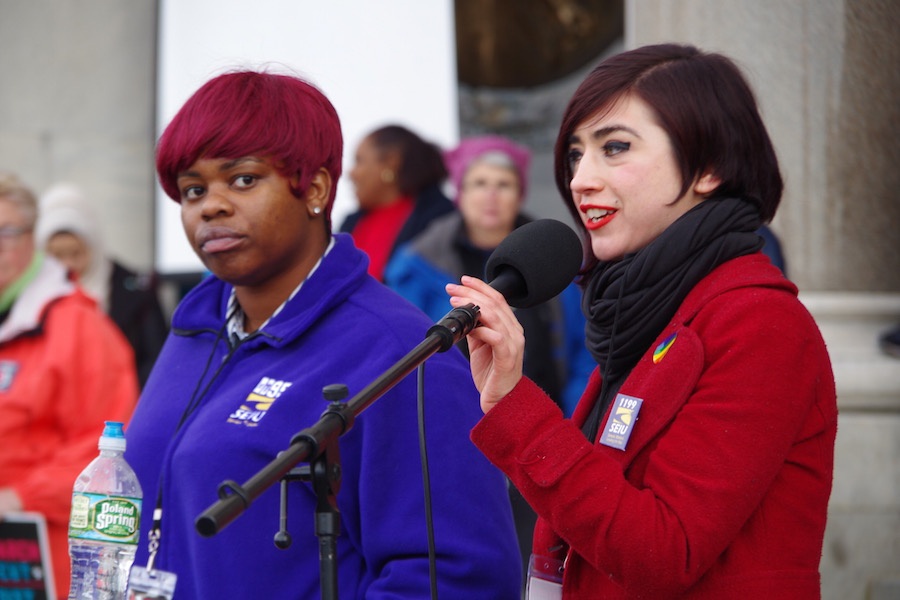 “I’m going to tell you a story, ok? One day my mom came home from work. And she said: I think I’m gonna get fired. And I asked why.”

“Turns out there was an infection of something called MRSA going around that nursing home, and the higher ups were doing nothing about it. And the other day, my mother’s friend had gone up to her, and shown her her forearm with the infection all across it. And my mother’s friend said to her, she said, Robin, they’re forcing me to keep working, what are we going to do?’”

“And my mom took her by the hand and took her into the head nurse’s office, and the head nurse told them to get back on the floor and keep working. But my mom didn’t give up. She got them to pay for not only the eradication of the infection in the nursing home, but also the treatment of the employees. The day after the company agreed to do so, my mother got a call from HR. That HR representative sat her down and said, ‘you’re on the chopping block for blowing the whistle.’” 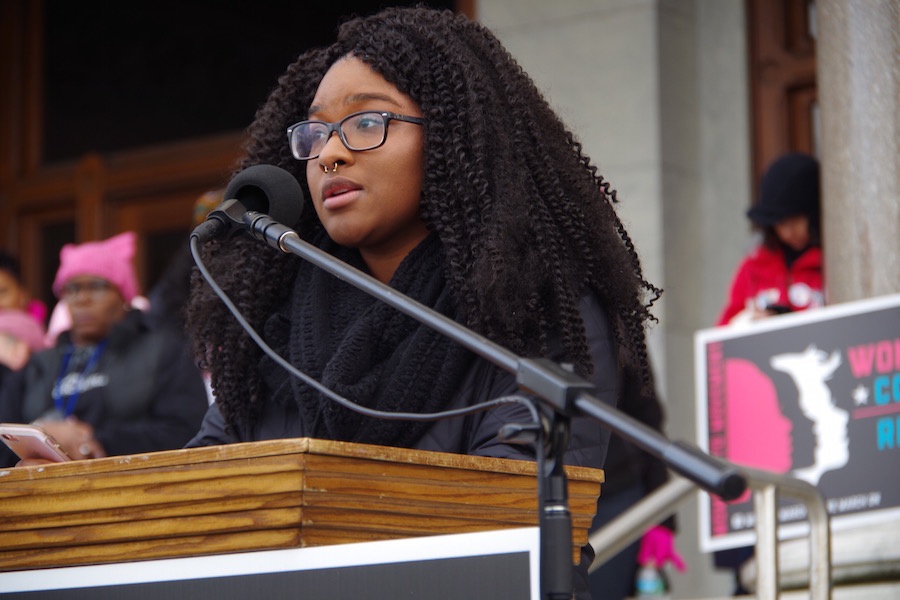 To watch more from the march, click on the embedded video above.