In Search Of Snow Yetis 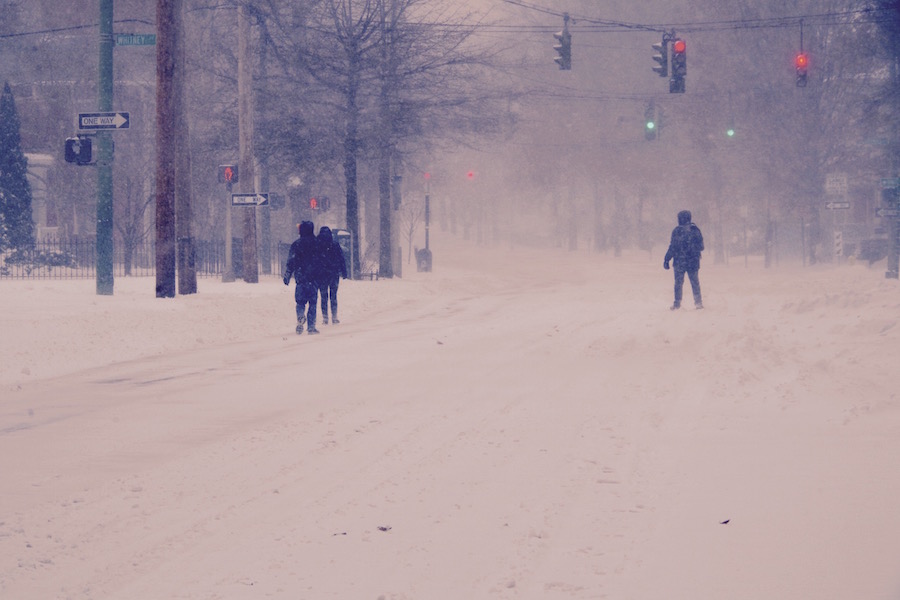 It started as an earnest search for this year’s intrepid and elusive Snow Yetis. It ended with a few new friends helping each other over mounds of snow, and through face-numbing gusts of wind.

That was the story between East Rock and downtown during the year’s first bomb cyclone, as CT Transit buses rolled cautiously through the streets and a few New Haveners ventured out for last-minute groceries, shoveling duties, and daily caffeine fixes at shops that were still open. 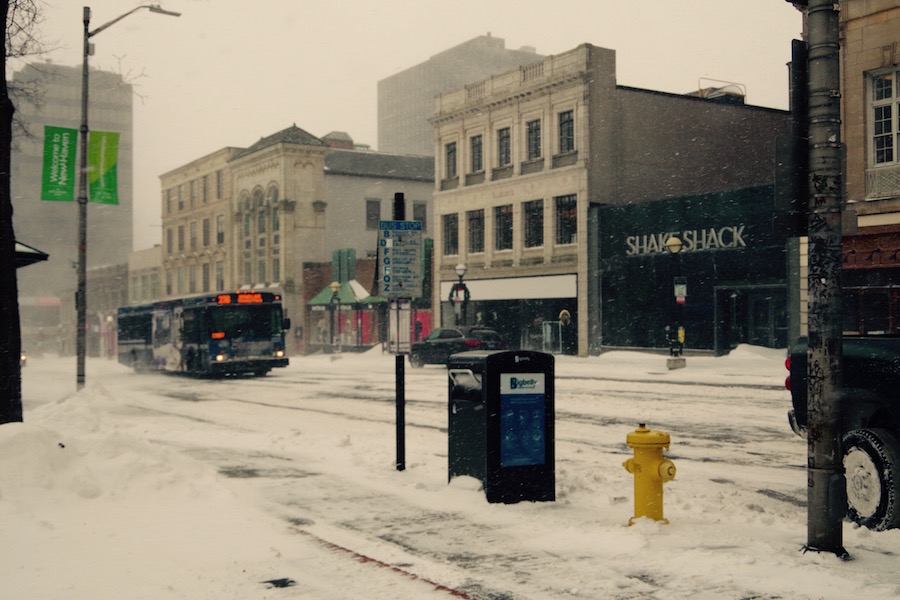 While the loudest sound on the New Haven Green remained a whipping, branch-snapping wind, Chapel Street sprang to life in the morning and early afternoon, buses like the Dixwell Ave. 238 heading up the street just a little behind schedule, wheels sending up clumps of snow in their wake. 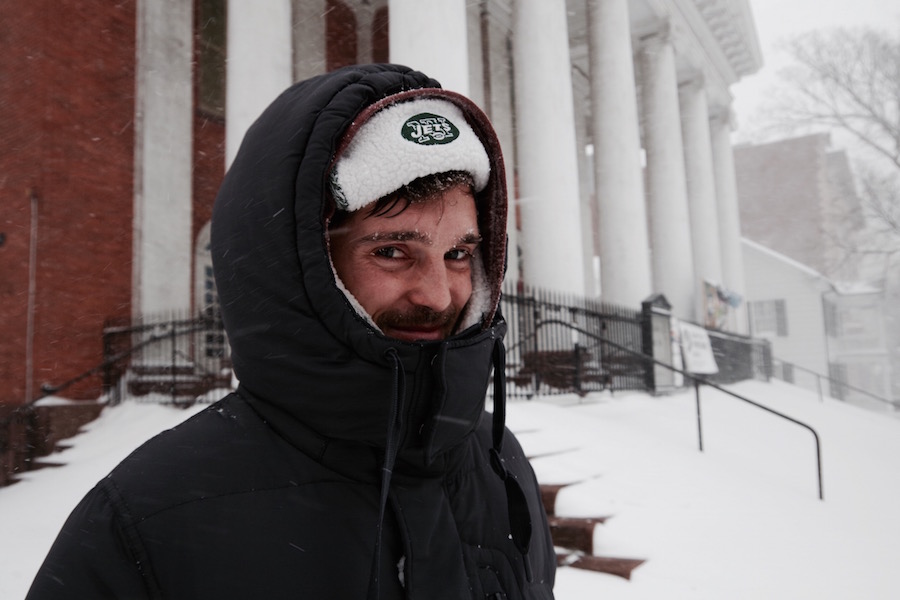 So too for the city's public servants--and journalists. Like New Haven Independent reporter Thomas Breen, whose trip to cover emergency calls at the Dixwell Fire Station took him through downtown on his way to Goffe and Webster Streets, where the station is located.  As his colleague Markeshia Ricks did some whiteout condition reporting of her own, he contemplated jogging over a small snow mountain at the intersection of College and Elm. 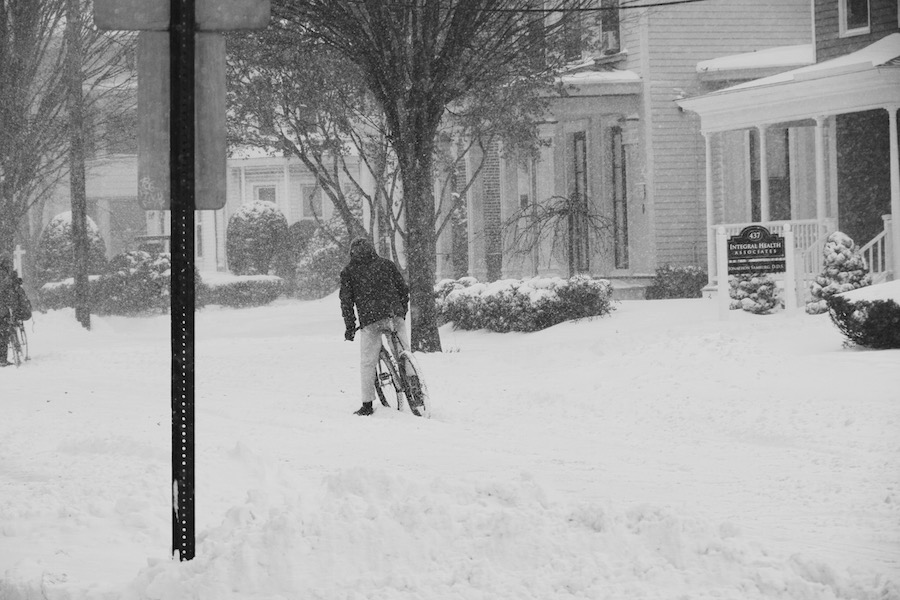 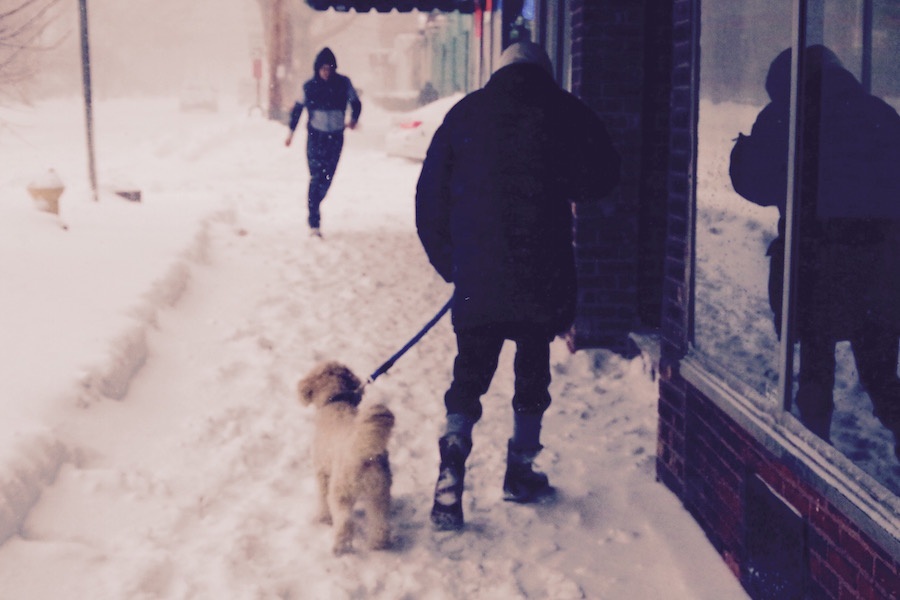 Back up Orange Street and onto State Street, a few brave commuters, cyclists, and dog walkers struggled to make it up and down the road. While no Yetis—citizen volunteers, armed only with their shovels and inspired by SeeClickFix and Snowcrew— appeared through the snow, the commuters still had help. Up and down major arteries chugged plows sent out all day by the Department of Public Works, and brave shovelers parked outside their homes. 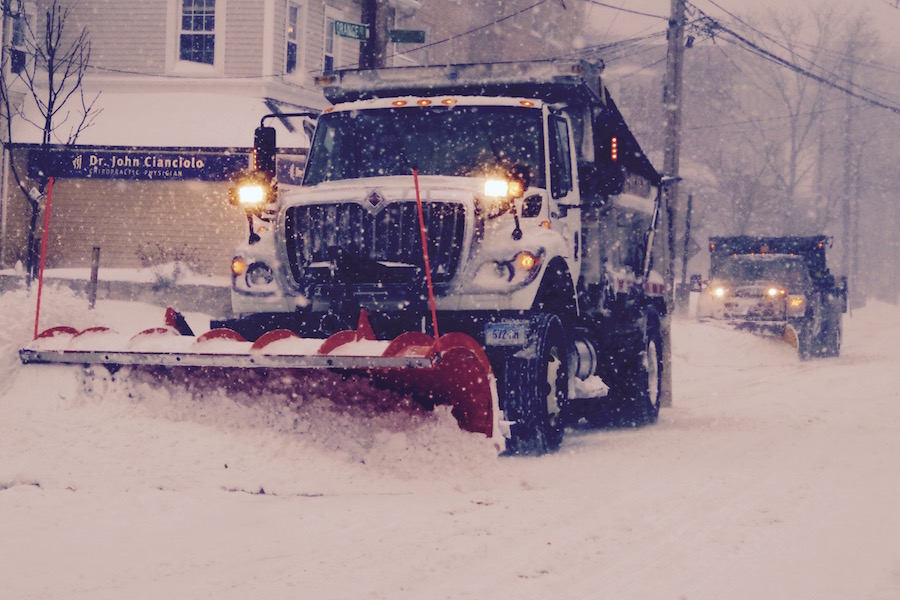 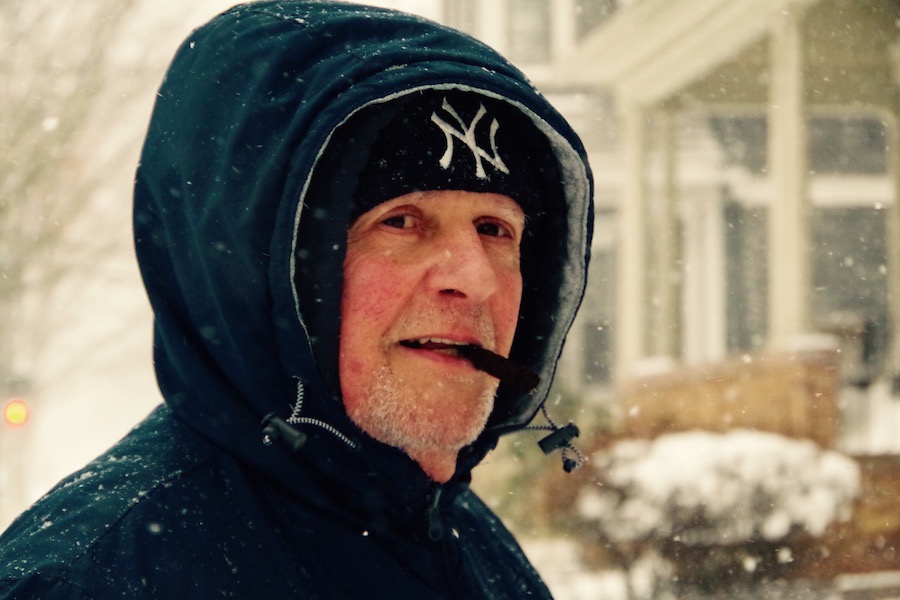 A half-Yeti and Orange Street resident who asked to be identified as "Fred." Lucy Gellman Photo

That was a relief to a few businesses that chose to keep their doors open, and noticed a steady trickle of customers throughout the morning and afternoon. As Koffee? staffer Coulter Davis took down the shop's front sign to prevent it from knocking into—and shattering—a front window, East Rock Coffee owner Dave Oricchio posed outside with a warm cup of joe, urging fellow East Rockers to make the frosty trek. 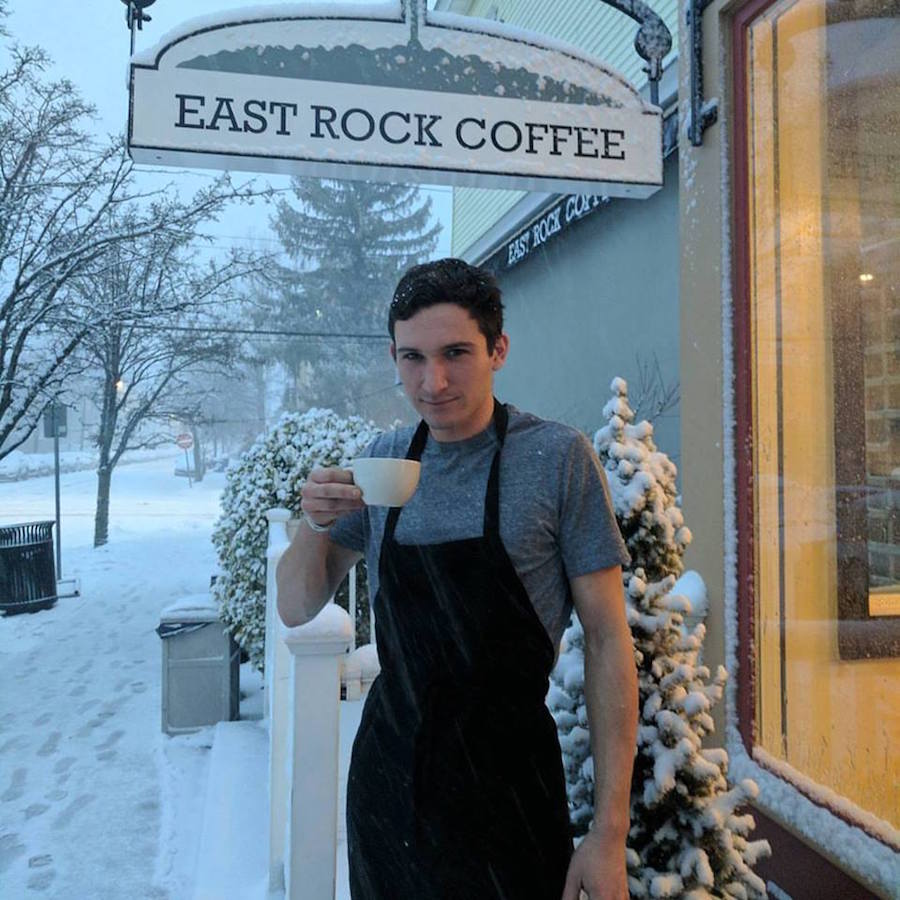 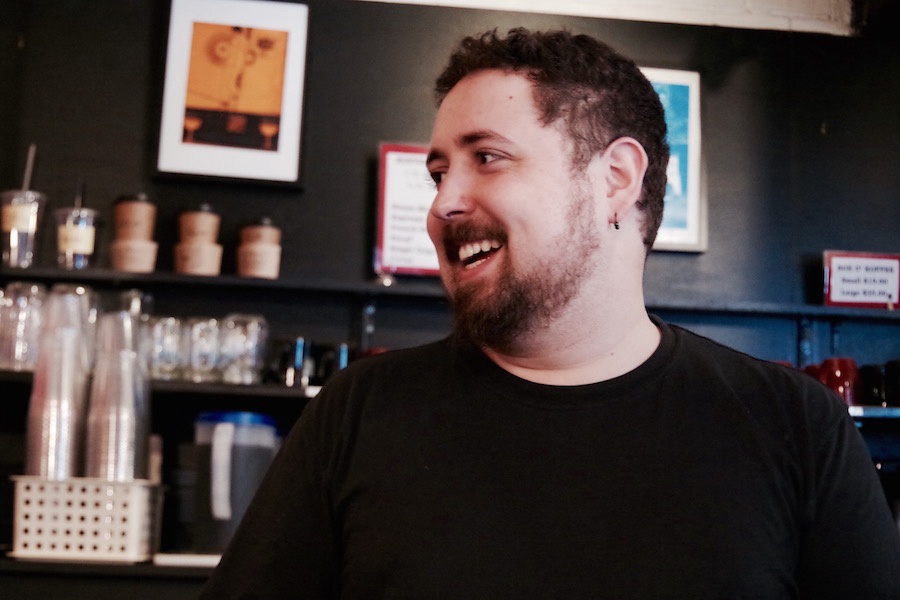 "It's kind of comforting, for the weather to be seasonal," said Koffee? barista (and self-described "blizzard first responder" for the shop) Nate Blair. "For it to be snowing in the beginning of January. And in particular the first snowstorm, I feel really good about. Because I'm like: It's winter. Actually." 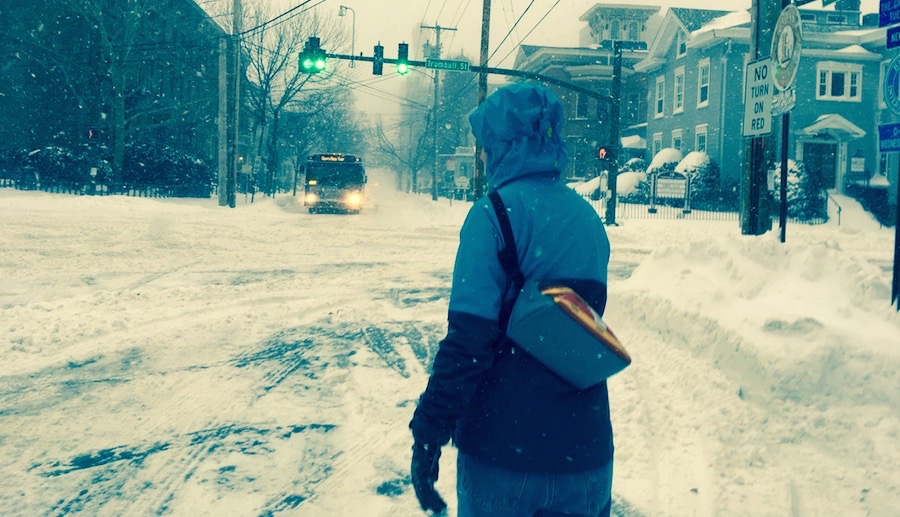 Some braved the snow well into the afternoon, as the sun was setting. After several games of Settlers of Catan, Playwright Margaret Douglas ventured out of her Bradley Street home toward downtown, intrigued by the promise of free yoga and wine at 200 College Street.

They were trekking there, said fellow Bradley Streeter Sarah Masotta, because a snowed-in resident from Yale's OB/GYN program was teaching a spur-of-the-blizzard yoga class to residency applicants who had come to interview at with the Yale School of Medicine. When the snow hit, applicants' Thursday interviews had been pushed to Friday, leaving them with unexpected free time in an unknown city.

As she and the group made their way back several hours later (with this reporter in tow), they came across their first Yeti of the day: a New Haven police officer who jumped out of a squad car, turned on his emergency lights, and helped push a car that had become stuck in the snow.

"Good night!" he yelled to the driver, waving an ungloved hand, as the car rolled out of a snowbank, and headed slowly down Trumbull Street.