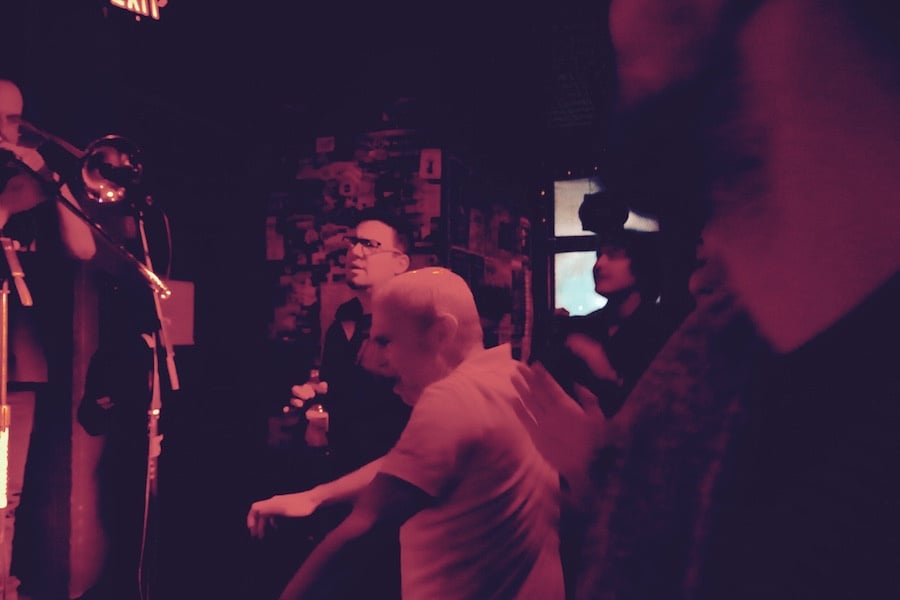 Cafe Nine was awash in a blissful, brass confetti. Somewhere in the back, strains of The Soul Rebels drifted up to the front of the stage, and wormed their way through the trumpet and trombone sections. Closer to the front, a bouncy riff on Inspector Gadget reared its head. Mostly, there was a saucy, pepper-spiked dose New Orleans parade, punctuated with oh! oh! oh! oh! right on the downbeat.

Monday night, the Funky Dawgs Brass Band graced Cafe Nine, bringing with them an epic and largely unexpected dance party. Over 100 New Haveners showed up for the event, the latest in a string of Manic Mondays at the venue. Braving the newly snow-slicked streets, they, the brass band, and opener Tracy Jo and the Toads transformed the one-room venue into a packed, grown-up sort of bouncey house, flecked with a soulful, propulsive brass beat. 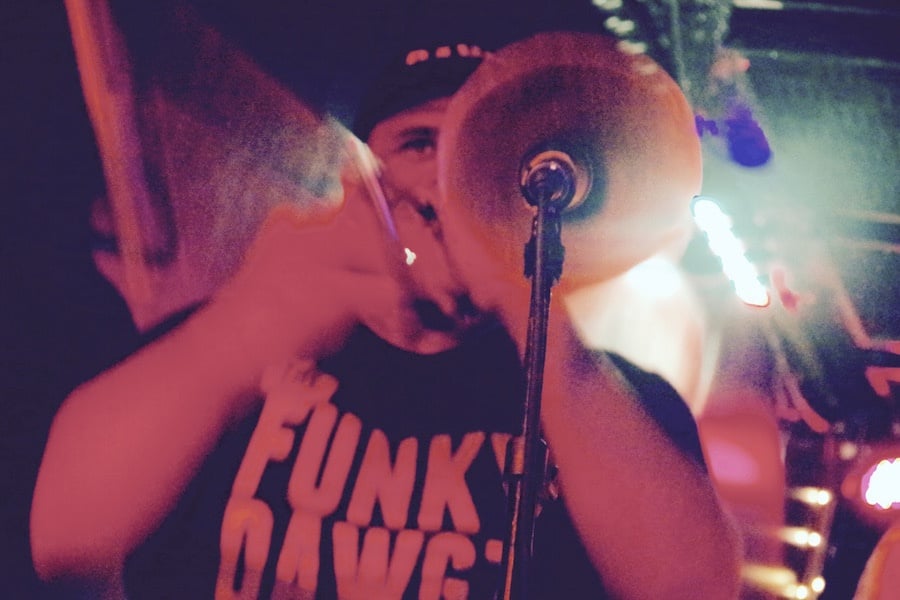 Founded a few years ago at the University of Connecticut, the Funky Dawgs bring a mix of hip-hop, New Orleans style swing and jazz, funk, and brassy, bossed up covers of contemporary pop songs to their concerts. Their music is very much a gumbo, carried by tight, buoyant sets and members who are musically in lock step with each other. And, when in New Haven, they always bring a party.

Taking the stage to the words “Funky Dawgz get down tonight/Funky Dawgz get down tonight,” the band drew the crowd toward the front of the house, attendees swaying their hips and stomping their feet. In the very front, self-professed Funky Dawgz devotee (he also has attended their shows at BAR New Haven) Rick Warner was already sweating, twisting to the ground in an all-white outfit that bounced against the band’s black and white t-shirts. 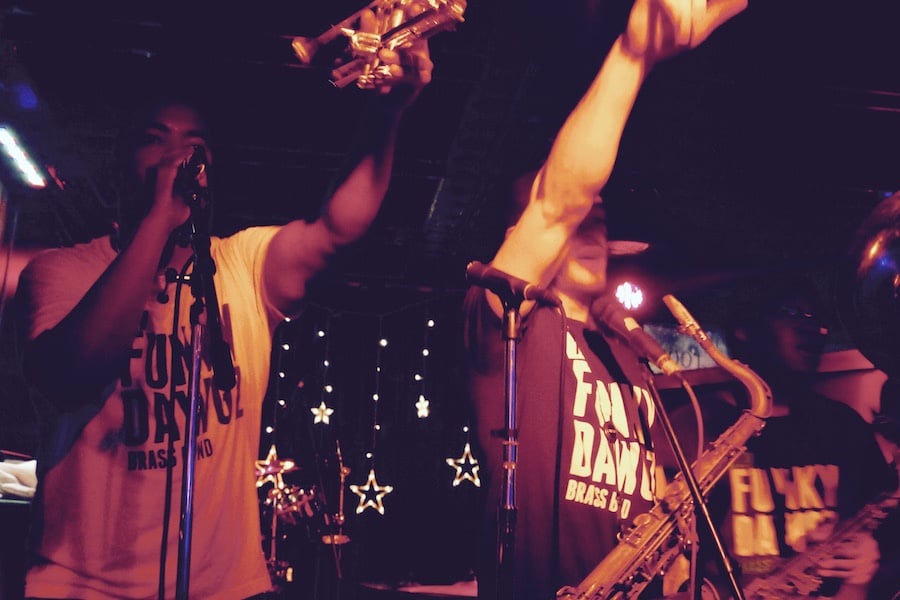 It was the beginning of a non-stop, 90-minute set that kept the bar dancing. From an introduction (“Ain’t no party like a Funky Dawgz party!”) that had the room jumping all the way to the back door, the group cycled through some of its original music to propulsive, just-shrill-enough arrangements by The Soul Rebels and Rebirth Brass Band.

With the first few strains of Eurythmics’ “Sweet Dreams (Are Made Of This),” members of the crowd went wild, some throwing their arms up in the air while others belted the lyrics, voices lost under the miced instruments.

On stage, trumpet player Aaron Eaddy became a sort of anchor for the group, saxes, trombone and sousaphone (Josh Murphy) exploding into sound around him. Obscured from view, Jon Singngam and Devon Farquharson held it down on percussion, their sure and steady strokes driving through the bar like heartbeats.

At the front, dancers peeled off extra layers, wool sweaters, button up shirts, sweatshirts and knit caps joining winter coats in unceremonious, damp piles on bar stools and corners of the floor. A few took out their phones to tape the event, while others cut loose from technology entirely, working their fingers through their hair, rocking their hips, shoulders and backs, and rolling forward on the balls of their feet.

The band danced along, members rocking as they delivered ream upon ream of brass-toned silk from the bellies of their instruments. Before launching into a soulful cover of LeVert’s “Casanova,” tenor saxophonist Tommy Weeks leaned into the mic, beads of sweat settling on his stubbly cheeks and chin. 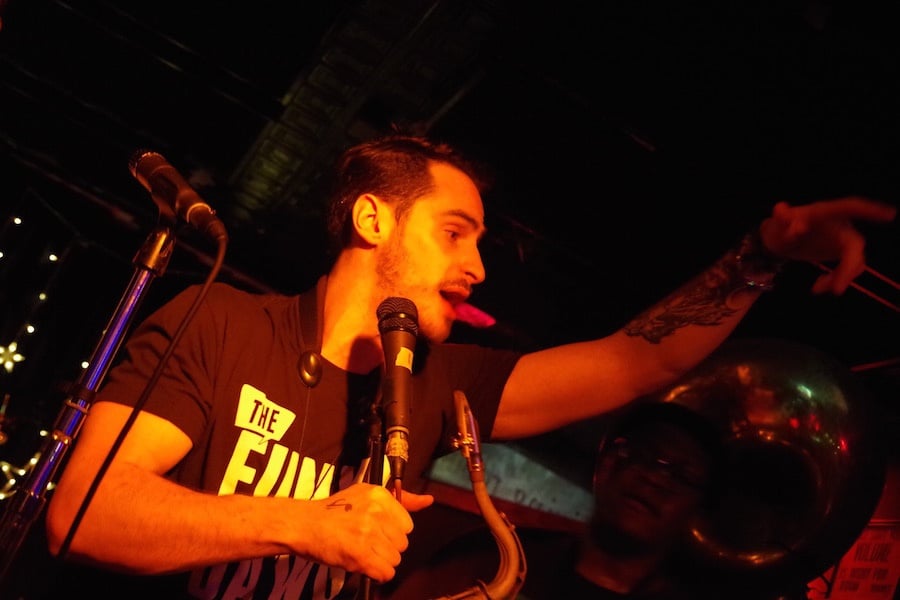 Already in the evening, he had welcomed the role of emcee and hype-bringer, lifting his arms above his head to clap or punctuate his vocals. He’d led the band as it sang a very brassy happy birthday to a friend of alto saxophonist Colin Walters.

“Usually we invite some of the ladies up…” he began.

The audience sent up a loud, throaty and not at all in unison cheer over music that didn’t seem to have any start to ending point. From one part of the room, there was a clear woo! From another, closer to the front, a Yass! As the first few strains of the song coasted over the crowd, musician Olive Tiger and a friend stepped up onto the stage, Weeks extending a hand as they made it up in their snow boots.

The band wasn’t done yet. In their planned final number of the night, members made their way off the stage as instruments headed into “When The Saints Go Marchin’ In.” Suddenly, Marvin McNeill wasn’t at the corner of the stage anymore; he was maneuvering his trombone slide through a sea of bobbing heads in the audience. As if by teleport, Weeks had made his way onto the  bar, his head near the Cafe’s tin ceiling as he closed his eyes, and leaned totally into his instrument. Bodies gravitated toward the center of the bar, forming a sort of wide pulsing knot around McNeill as the group landed the ending of the piece.