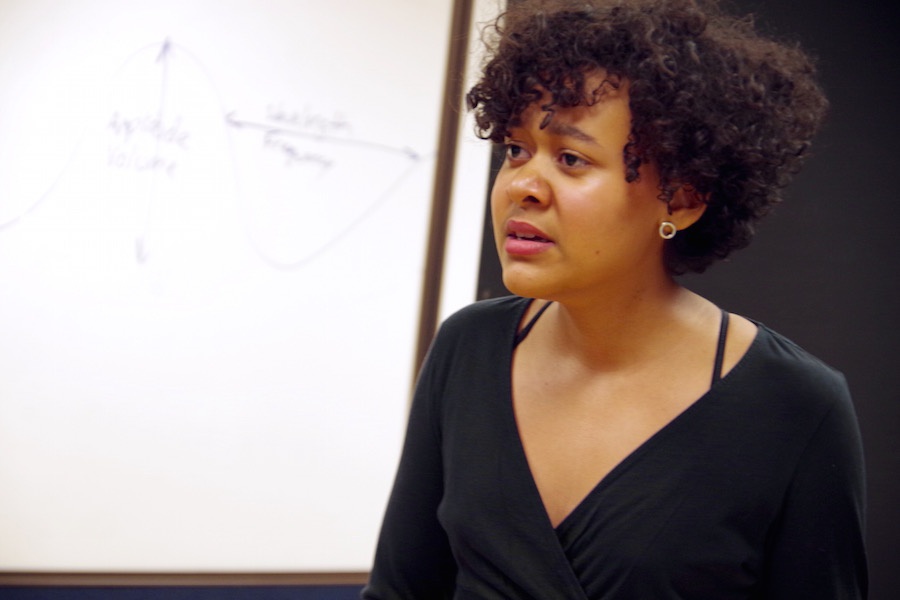 Remsen Welsh: “It’s a thing where I get transported. There’s a part of her I think I can breathe new life into.” Lucy Gellman Photos.

We first ran this piece last year, as students were getting ready for the New Haven's chapter of the the August Wilson Monologue Competition in February. As we prepare to cover that competition again, we wanted to re-share this piece as a snapshot of immense time and work that students put into the program. This year's competition unfolds Feb. 28 at the Yale Repertory Theatre at 7 p.m. More information is available here.

The scene is set. Pittsburgh, 1948, somewhere in the belly of the city’s Hill District. It is warm and dry, like anything could snap under just the right conditions. And Vera is filling the room with her anger, a heavy, smoldering thing that has travelled straight from her chest to the front of the room, and ripped the space clear in half.

I lay here every night in an empty bed. In an empty room. Her voice trembles. Where? Someplace special? Someplace where you had been?  The words take up every inch of her throat as they travel up and out.

Floyd. I wanted to know where you was bruised at. So I could be a woman for you. So I could touch you there. So I could spread myself all over you and know that I was a woman. She is going to bring Floyd to his knees if it’s the last thing she does.

And then, maybe, she is going to take him back. 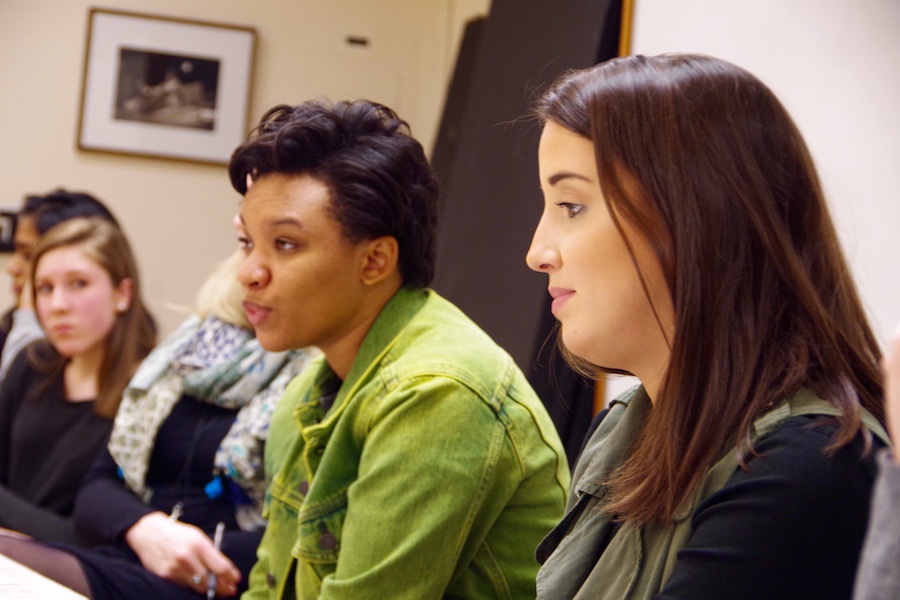 Treneé McGee (in the green) sculpts her feedback for the students.

Except we’re not in Pittsburgh. This is the Educational Center for the Arts (ECA) on Audubon Street, where high school students like Remsen Welsh are rehearsing for the August Wilson Monologue Competition, transforming into the Veras, Floyds, Renas, Bernices, King Hedley IIs and Rubys that populate August Wilson’s most celebrated plays.

This spring marks the third year that New Haven has participated. After piloting the program last year, Long Wharf Theatre paired up with the Yale Repertory Theatre and Wilbur Cross High School, the Regional Center for the Arts, Educational Center for the Arts, and Co-Op High School for the 2018 program. They expanded that further in the 2019 program.

In all, over 150 students are participating, preparing for the panel of judges that will meet them at New Haven’s Regional Final on Feb. 28 at the Yale Repertory Theatre downtown. From there, the highest-scoring two performers will continue to the national final in New York City later this spring.

On a cold, bright day in mid-January of last year, rehearsals were well underway at ECA, where 12 high school students are vying for one of the regional spots this March. Ensconced in Ingrid Schaeffer’s upstairs drama classroom, they made their way across the floor, some pacing fretfully as others took their time with long, careful strides across each floorboard. As they walked, breath audible, they were transitioning out of this realm, and into Wilson’s. 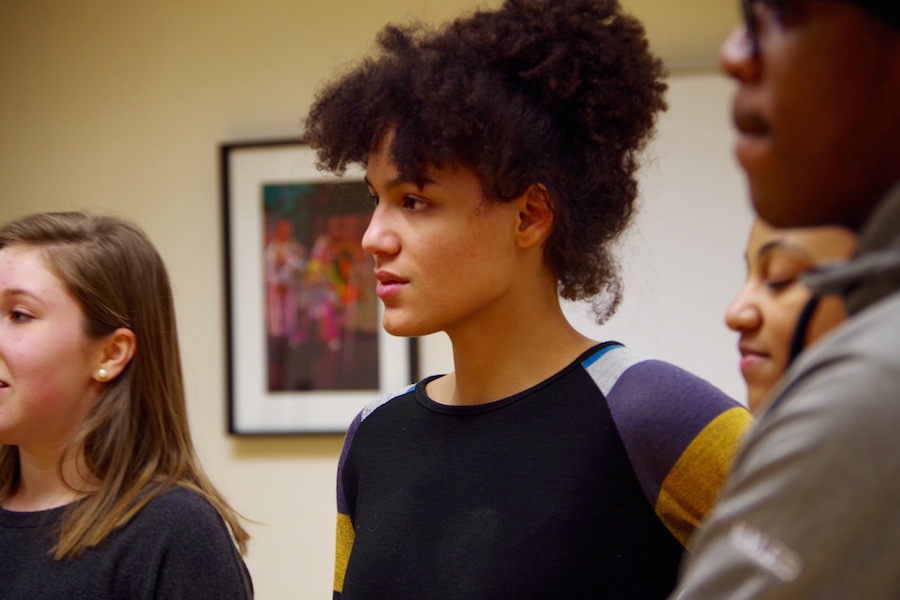 “How does your core move? Do you have a strong core?,” called out Madelyn Ardito Newman, director of education at Long Wharf. “Do you take care of yourself? Are you sick? Are you hungry?”

Students changed their steps with each question. On the periphery, Zoe Eklund’s Vera (Seven Guitars, 1995) paused for a moment, her hand gliding through the air. Across the room from her, Jhenzen Gonzalez became a totally different Vera, mouth twisting as she sped up and focused on a point ahead of her. Right at the center, Hannah Stein’s Bernice (The Piano Lesson, 1987) stopped and started. On Newman’s cue, she shouted out a line: “Mama Ola polished this piano with her tears for 17 years.”

During these sessions, students are critiqued by drama teachers, theater educators, and directors—but also by each other. Huddling into smaller groups of three and four after their warmups, students migrated to different corners of the room, running lines one at a time. In one group, Justyn Velez said he was channeling his dad, a proud Boricua who talks about getting pulled over because of his darker skin, before launching into a monologue from King Hedley II. 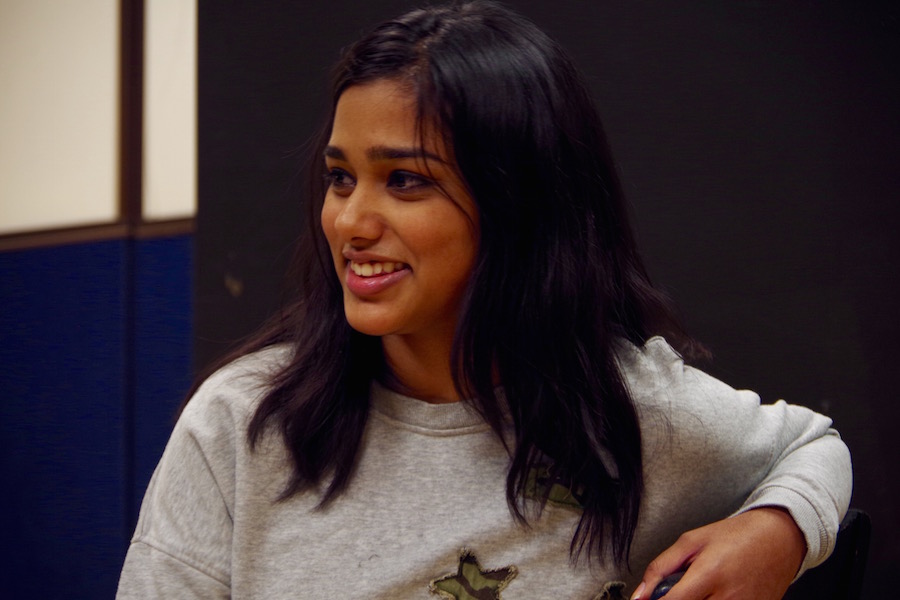 Chopra: Consider the weight of the lines.

“My fifth grade teacher told me I was gonna make a good janitor,” he began, tilting his face to the ceiling. Wilson’s words worked through him. “Had me believing it. I come home and told mama Louise I wanted to be a janitor.”

His face tightened as he continued. “Got one job the man told me he was gonna shoot me if he caught me stealing anything. I ain’t worked for him ten minutes. I quit right there. He calling me a thief before I start.”

The group cycled through. In an oversized sweatshirt, Sadie Turner transformed into Rena (Jitney, 1977), her head swaying to one side as she berated her partner Darnell for taking the grocery money, leaving their small child with nothing to eat. Chopra bowed her head and returned as Ruby, a strong women who couldn’t stand no jealous man. Then Welsh was up, channeling a woman who had been left by her man, only to have him come back.

“You never showed me all those places where you were a man. You went to Pearl Brown and showed her,” she proclaimed, tears starting to run. “I don’t know what she did or didn’t do, but I looked up and you was back here after I had given you up.” 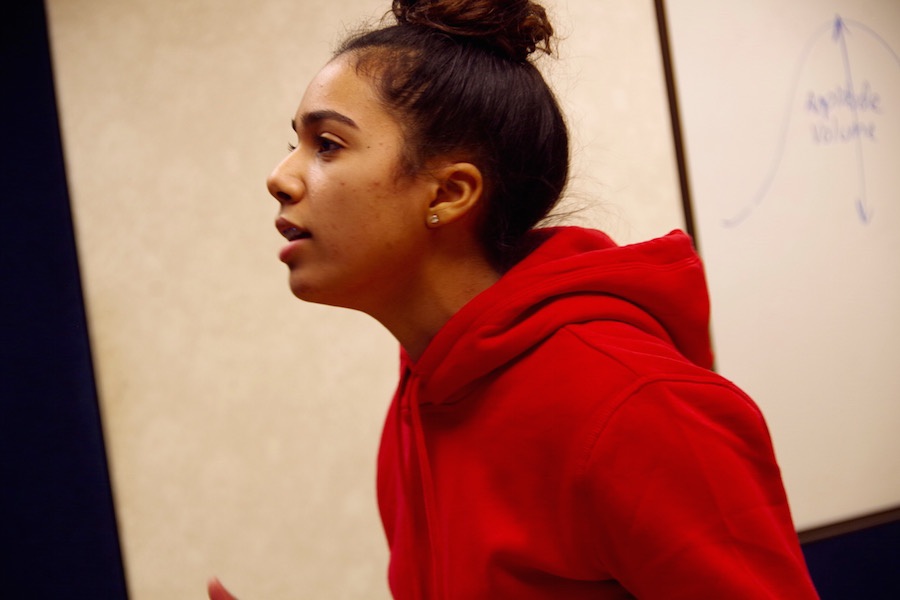 Earlier in the session, she had flashed a quick smile when asked why she chose to take on Vera. The competition odds are against Veras: Her monologue from Seven Guitars is one of the most frequently selected and performed in the competition. At ECA alone, there are three Veras in a group of 12, joined by several others in the region. There are sad Veras, angry Veras, strong Veras and smarting Veras cleaning their wounds as they speak.

For Welsh, that wasn’t a deterrent. It was a selling point that started when she saw the show at the Yale Rep last year.

“I was astounded by how the character did it,” she said. “It’s a thing where I get transported. There’s a part of her I think I can breathe new life into.”

But with Vera’s last line—It ain’t even here no more, what you looking for. What you remember. It ain’t even no more.—Welsh dissolved into tears. Watching the performance, Treneé McGee swooped in.

A graduate of Co-Op, competition alum and resident teaching artist at Long Wharf, McGee has been helping coach the students. Earlier in the session, she said it was her hope that students didn’t just learn more about Wilson through the competition, but could also place his lived experiences in dialogue with their own.

“One of the things that is universal about this work is love,” she said. “It’s family. It’s identity. He opened the door to humanity.”

Two weeks later, ECA students headed to Audubon Street’s Little Theater to face their toughest audience yet—judges from Long Wharf, Elm Shakespeare Company, and ECA, with a large group of their peers. As they took the stage, Schaeffer made notes, scribbling furiously on papers in front of her.

Kaleb Walton’s Floyd drew laughs and Mmmmms of assent as he stepped back into the world of Seven Guitars, hollering “I seen you and said, ‘There go a woman!’” at a fixed spot to his right. Turner’s Rena had hardened, landing each line as she let a sort of seething rage take over the performance. To become Martha Pentecost (Joe Turner’s Come and Gone, 1984) Tiana McGee channeled her own performance last year as Zonia, the daughter who Martha had left behind. 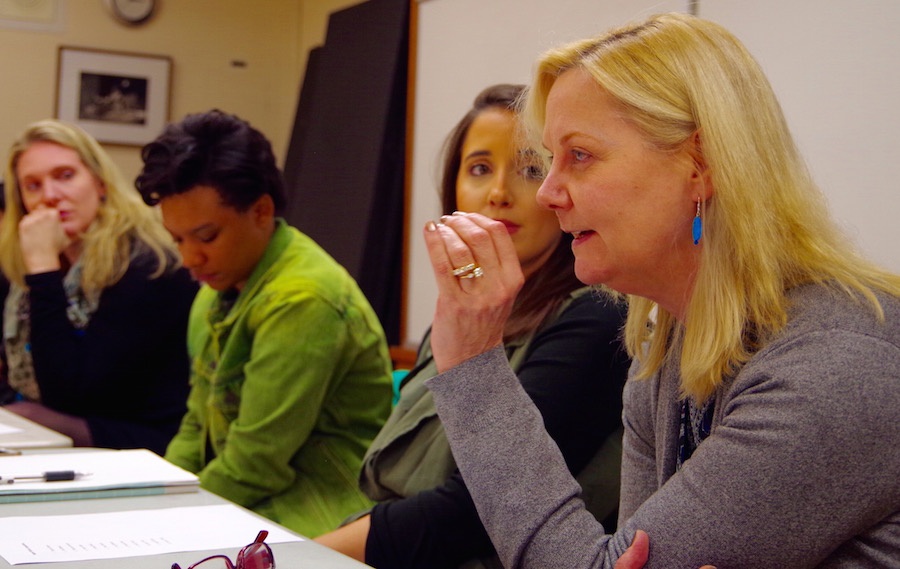 Ingrid Schaeffer, with Ardito Newman and McGee in the background.

Up fifth, Stein returned with a sharp Bernice, parsing out her words and hitting each T sharply. A room materialized around her: wood floors, clean walls, and that piano, polished by decades of tears.

A white actress, Stein said she looked to her own history of suffering as she took on Bernice, and grappled with the legacy of slavery. A practicing Jew, she had explored the impact that the Holocaust had on not just her family, but an entire population.

“August Wilson’s work is so relatable,” she said. “For me, this was about getting to learn new things. I keep learning about the character, and breaking it down.”

Schaeffer nodded along to McGee and Stein, listening to the students as they prepared for regionals.

“Often, we think we have to reach outside of ourselves and really it’s here,” she said, pointing to her chest. “That relation to the text could come from the text, but maybe it doesn’t. And it speaks to a lot of people.”