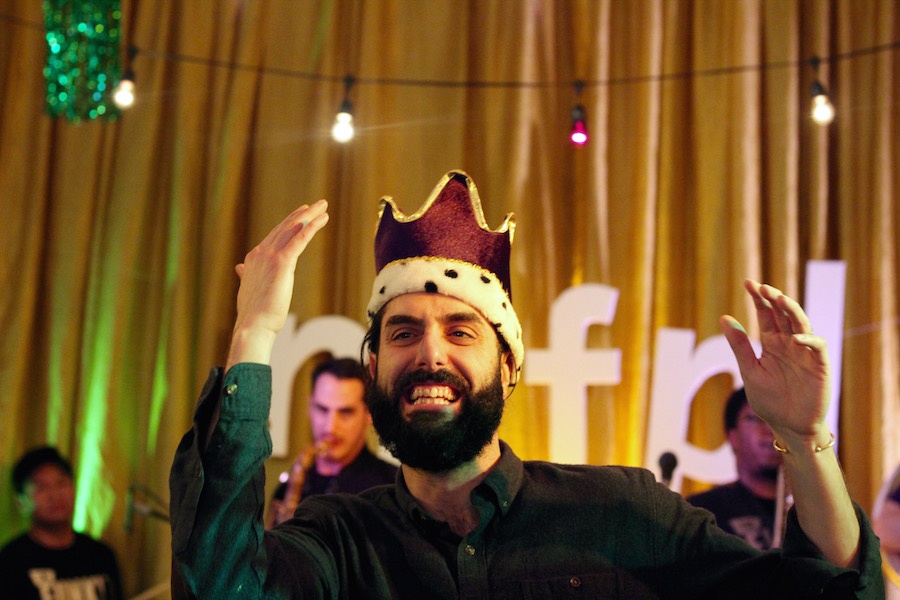 The beads flickered from neck to neck. The brass bands sidled up to shelves of books and played on. The gumbo was still piping hot, and conjured as much good gossip as a crawfish boil. But signs of the main Ives branch of the New Haven Free Public Library (NHFPL) were nowhere in sight. And for the first time in years, no one expected them to be. 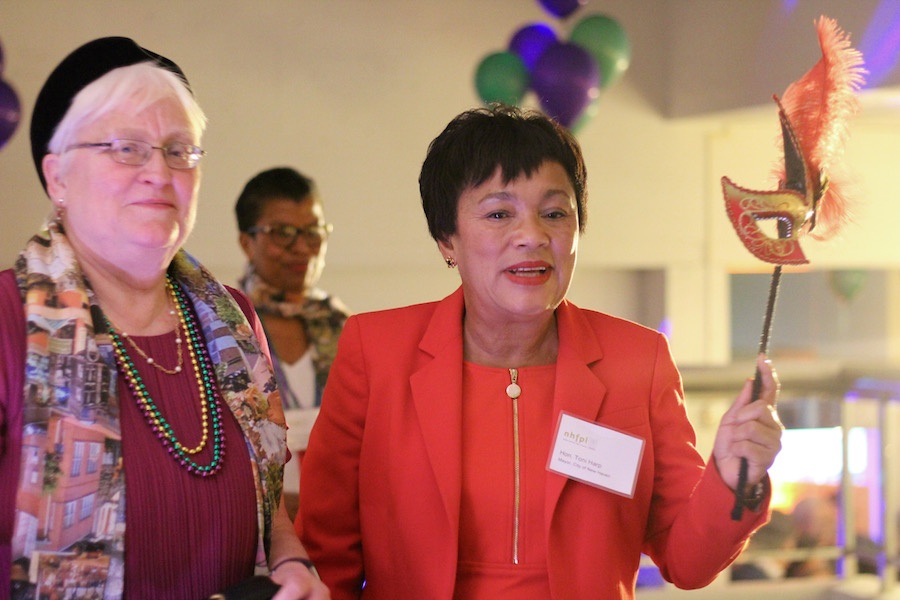 City Librarian Martha Brogan and Mayor Toni Harp follow a parade of drag queens and musicians to the party downstairs.

Tuesday night, the NHFPL held its annual Mardi Gras celebration and fundraiser at the Mitchell Branch of the library, moving the celebration from downtown for the first time in years. While the tradition was born over a decade ago at the New Haven Lawn Club, it has lived at the main library since 2011, when financial cutbacks pushed it to make the fete an in-house affair with community partners.

But this year, a new eye on the community led the celebration to Westville, where Mitchell Library sits back from the corner of Whalley Avenue and Harrison Street. As the library’s largest annual fundraiser, the event brought in over 200 people over the course of three hours. As of Wednesday morning, the library did not yet have the total amount raised.

Like last year, a certain political shadow hung over the first hour of the event. As City Librarian Martha Brogan welcomed attendees, she referenced James Walker’s recent editorial in the New Haven Register on the importance of a functioning public library in his own life and education. She thanked supporters “for understanding that free public libraries are needed the most during the darkest of times.”

Mayor Toni Harp echoed those words, warning attendees that “we see a state retreating from its ability to serve its libraries,” and that a rocky road laid ahead for patrons and fans of the library system. 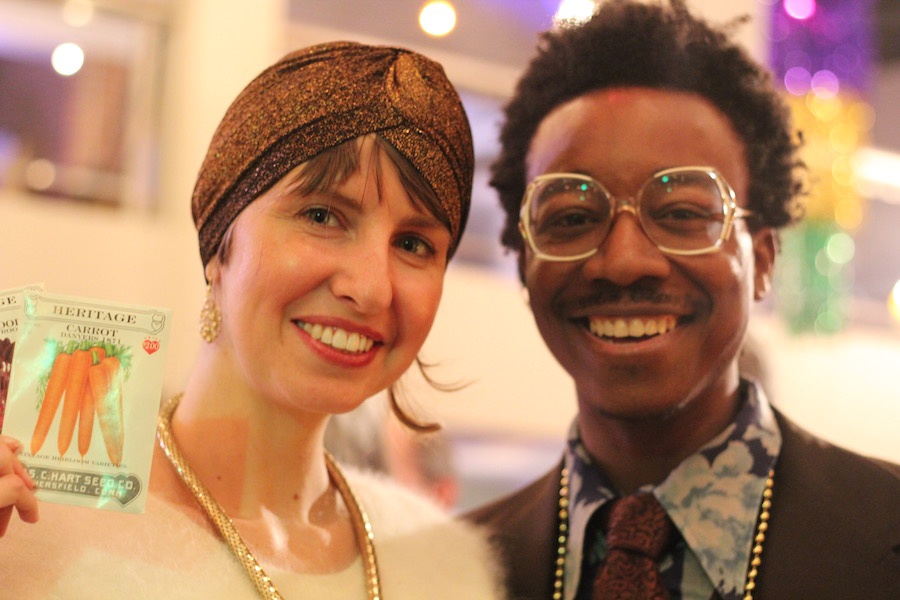 But the shadow was soon lifted—at least partially—as Brogan spoke about what the library system has in store for the years ahead. In April, the library expects to open Ives Squared, a new “innovative commons” and cafe downtown, that is poised to become the whirring, tech-savvy heart of the downtown branch and the community.

NHFPL Foundation President Elsie Chapman gave an update on the efforts for “Stetson: The Next Chapter,” a $2 million capital campaign for Stetson Library as it prepares to become part of the new Q House next year. She recalled how 10 years ago, the Newhallville community was rallying to save the library from closure. Now, it is getting ready to welcome its expansion.

At the end of almost a year of fundraising—the campaign was formally announced last May—she said that the organization has brought in $1.3 million for the new Stetson. And that “as many of you know, sometimes the last $700,000 is the toughest to get.” 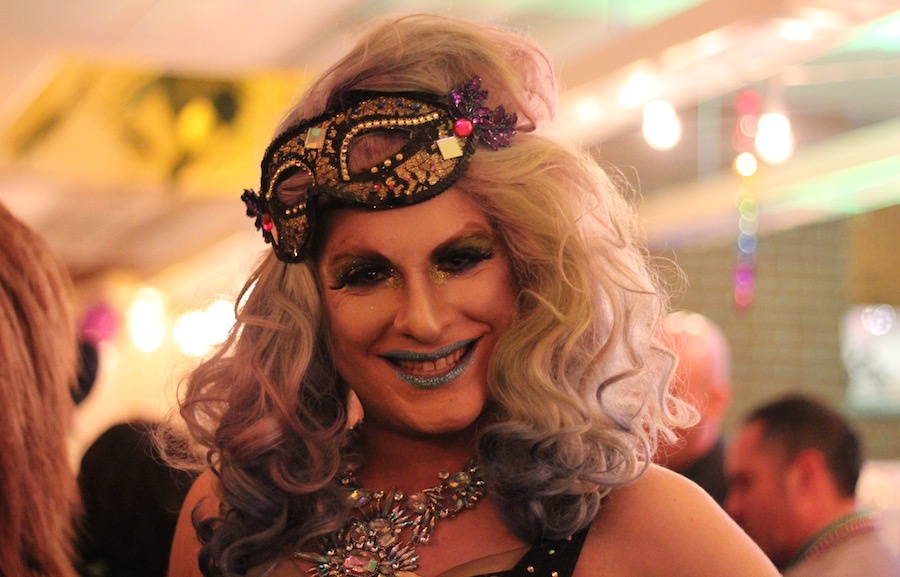 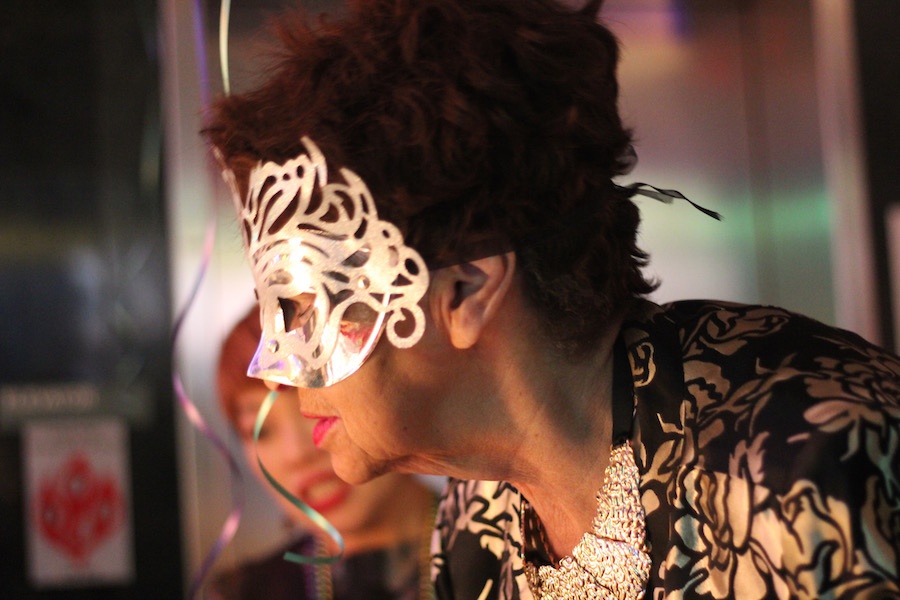 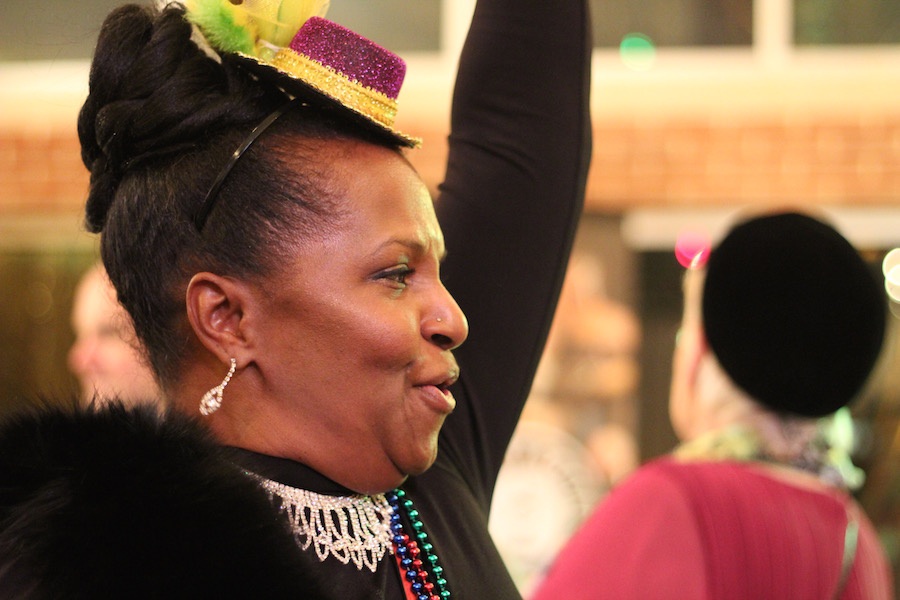 It was her pitch for attendees to chip in, signing up for prizes at a table that read “help fill Stetson’s stacks” in orange cardboard.

“It’s going to be everything a branch library in this city should be,” said Chapman. “Help us fill the Stetson stacks.”

As Brogan, Harp and Chapman finished their remarks, the New Orleans-style party was just beginning. Out from a small second-floor hallway danced Luis Antonio, Kiki Lucia, Summer Orlando and other queens, the brigade led by none other than Fire Chief John Alston (not in drag). As attendees cheered below, paraders tossed beads over the crowd, filing down the stairs to Hillhouse marching band’s “When The Saints Go Marching In.” 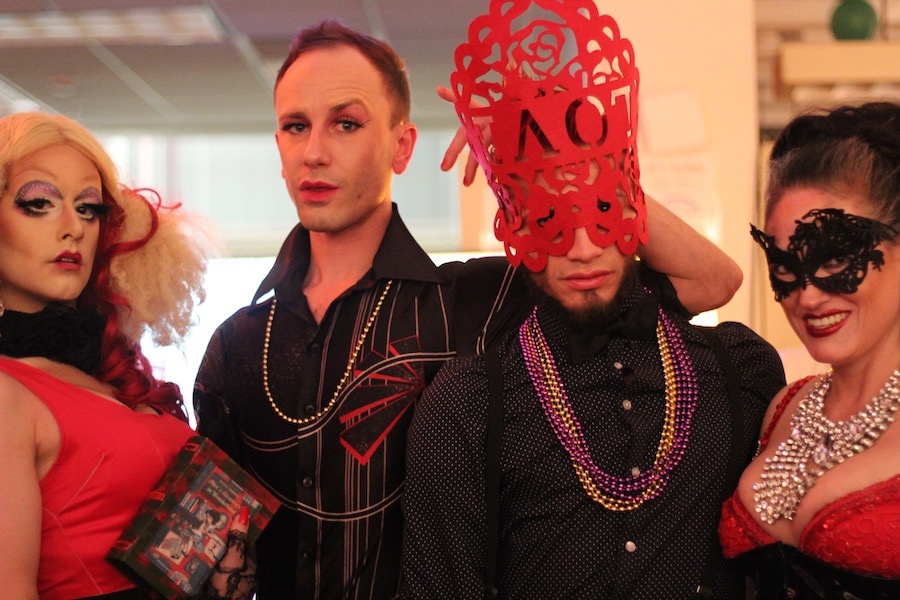 The library transformed into a treasure trove, its back room filled with chefs from around the city. At stations from Amoy’s Cajun and Creole, Olives & Oil, Olea and Rawa, attendees waited to fill their plates with scoops of gumbo, sliders, chilled pink ceviche and falafel, mixing old Mardi Gras traditions with new ones. Long lines snaked around the room, friends squinting at each other through their masks and pausing for the balloons on the ceiling, the spray of glitter or beads that had somehow made it onto the carpet. 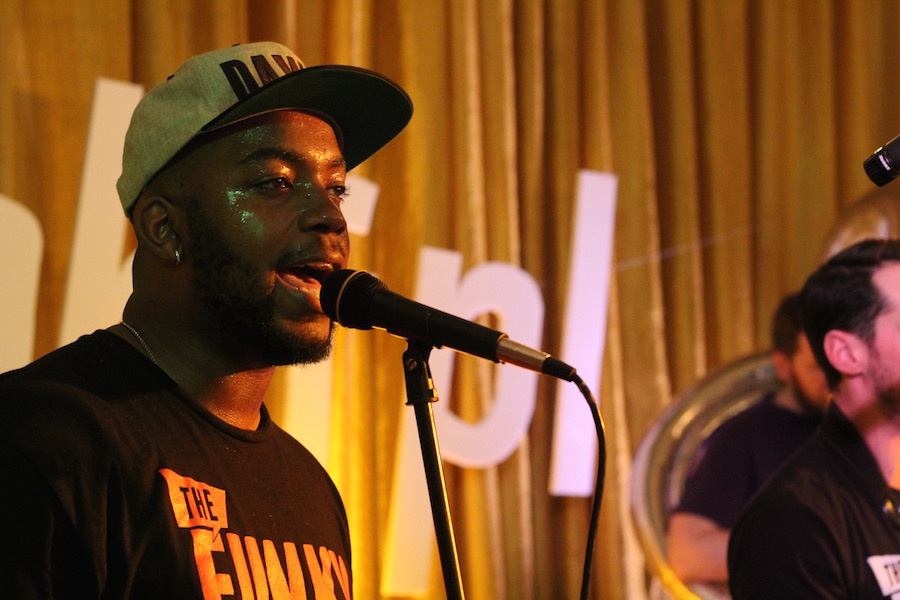 Back in the library’s main area, mixologists got to work, conjuring up New Orleans with each Vieux Carré (rye whiskey, bitters, cognac,  sweet vermouth, lemon twist) cocktail they turned out. Mixing fresh orange rind with a liquor that tasted of cherries, fruity tea and burnt, spun sugar, Ordinary’s Tim Cabral made small talk with faces he’d not seen in the bar, which is going on its sixth week of repairs since a pipe burst earlier this year.

They had addictive, classy brass to keep them going: the Funky Dawgz Brass Band, rocking as they played at one end of the room. Slowly, attendees tricked onto the dance floor, packing it by the end of the evening. Behind them, a photo booth from Lotta Studio shone silver with balloons and props, as attendees cycled in and out of it. 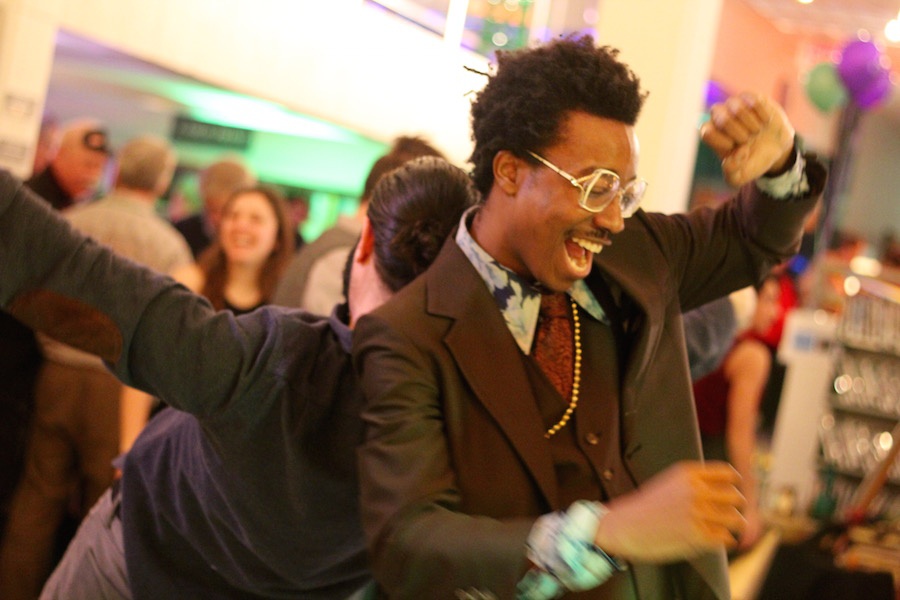 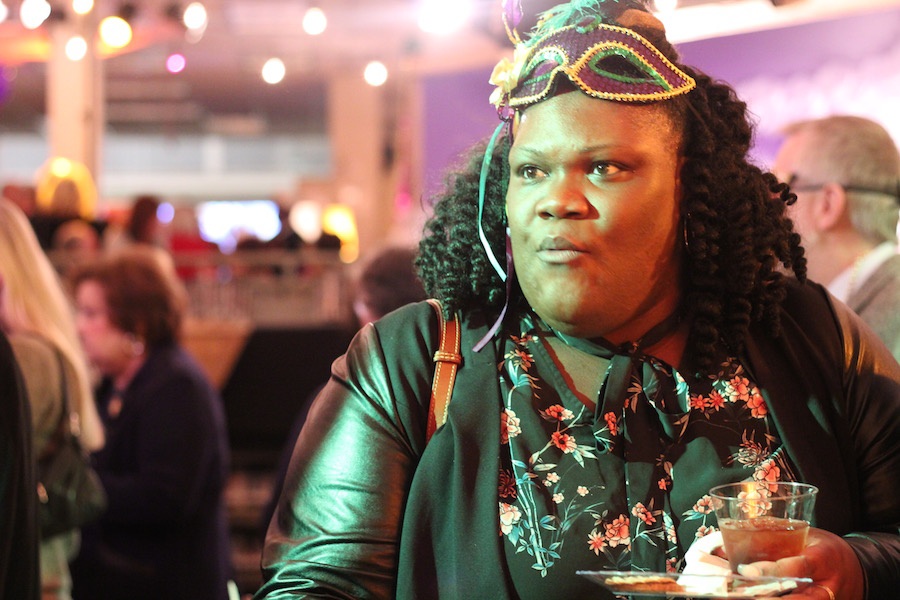 Fallon Thomas (pictured above, at right), who was raised in Westville, said the move to Mitchell had made the difference in her choice to attend. There with her friend Marinda Monfilston, she said it was her first time there, but wouldn’t be her last.

“I grew up going to this library,” she said. “I just love that it’s here.”