Sofrito From The Source 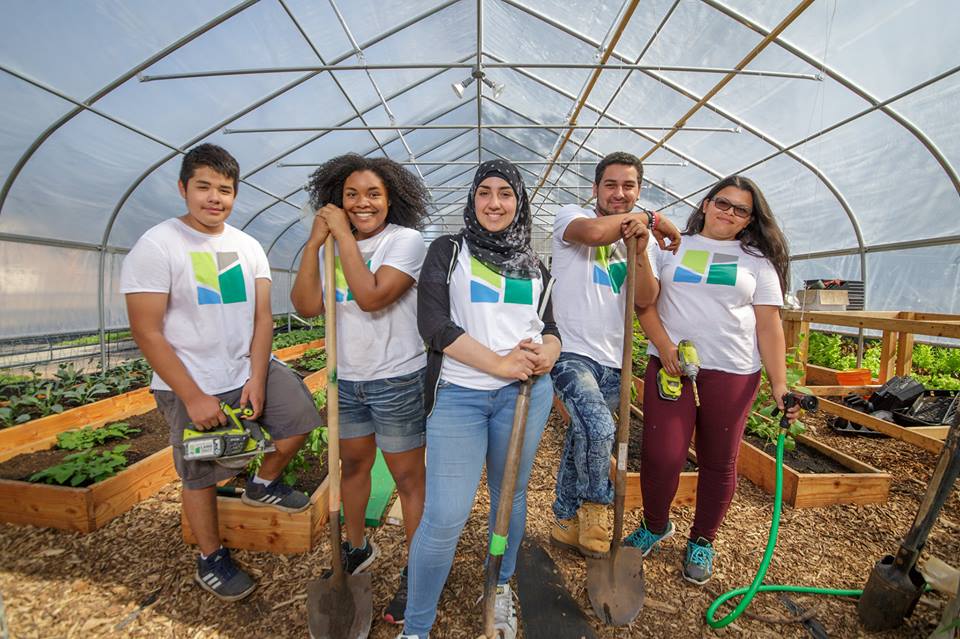 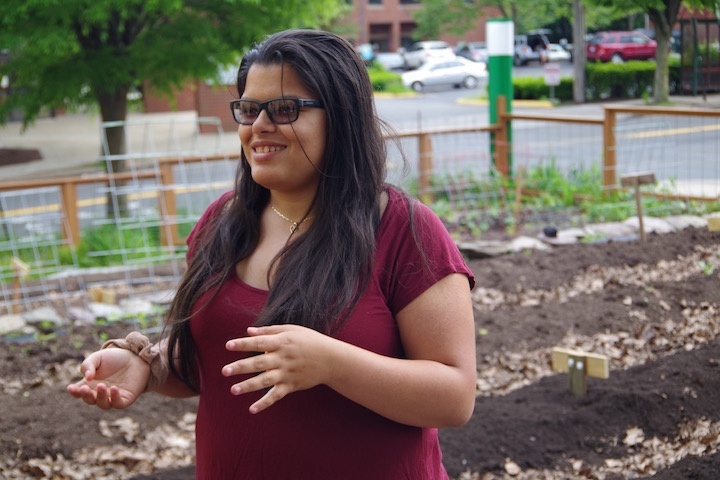 Sadilka Lopez has a to-do list before she graduates high school this year.

One: complete her ServSafe certification in food handling, and line up community college courses in Gateway’s food program. Two: learn more about growing her own produce, skills that she can bring with her wherever she goes. Three: teach New Haveners what real sofrito tastes like, so they’ll never be store-bought again.

It’s that third one that has risen to the top of her list. A senior at Wilbur Cross High School, Lopez is one of 11 ‘Growing Entrepreneurs’ with the New Haven Land Trust, a local nonprofit dedicated to land preservation, environmental education and community gardening. 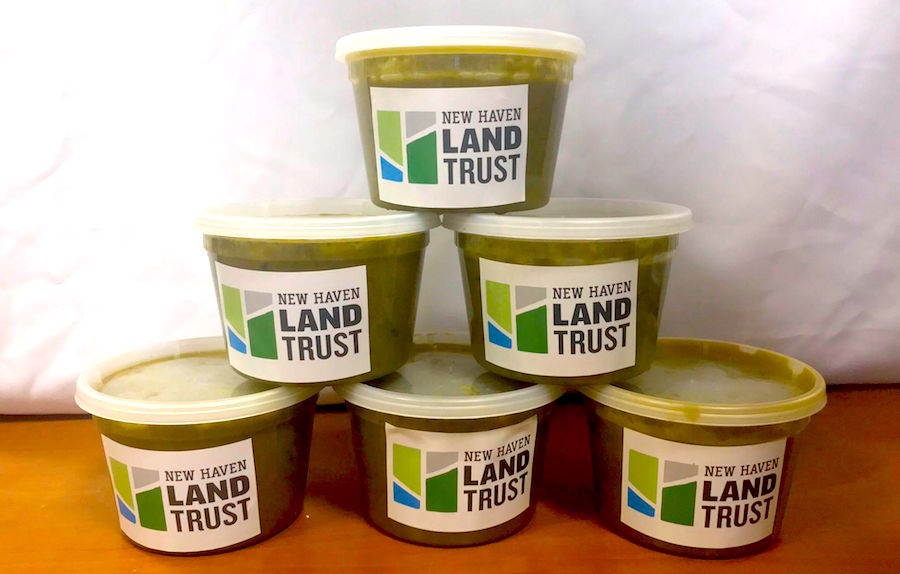 With the support of the Land Trust last year, she embarked on a business making small-batch, homemade sofrito—a puree of green, red, and hot peppers, garlic and cilantro, salt, pepper, tomato and onions. Now, she is using it to launch a culinary career.

The idea came as she was prowling the aisles of her local grocery store, where sofrito often sits in glass jars by the salsa and bean dips, or is hidden away in a questionably-titled “Ethnic Food” section.

One of nine siblings and half-siblings in a Puerto Rican family, she grew up eating it as a base for meals in her home. She knew that store-bought could probably expedite the cooking process. But what she saw didn’t resemble anything out of her youth.

“In my opinion, it’s not good quality,” she said on a recent episode of WNHH’s “Kitchen Sync” program. “It just looks and smells disgusting. You don’t know where everything’s coming from.”

But for Lopez, the journey to a small culinary business started years ago, during her childhood in New York City. At Christmastime, her elementary school had gone for a field trip to a cooking class, and she left with an oatmeal cookie mix. She said she can remember bounding homewards to her grandmother, with whom she was living, to make the cookies.

That simple concoction of oats, cinnamon, sugar and flour opened a culinary portal that hasn’t closed since. From a cookie mix, Lopez began watching her mother in the kitchen, as she conducted a culinary ballet with sofrito-kissed rice, pork chops, tacos, spaghetti, and a special birthday lasagne.

As the family moved from New York to Connecticut, she she studied her grandfather’s methods as he waltzed around the kitchen, turning simple weekday meals into works of art.

“That man could cook everything,” she recalled . “I swear, his fish is the only fish I would ever eat. He would get the fish frozen, and you would just see that man in the backyard skinning it, because he don’t wanna make a mess inside … all I knew was that it was delicious.”

Lopez (at far right) with fellow entrepenuers from her year one cohort. Ian Christmann Photo.

Years later, she would remember that fish when her grandfather passed away, and she swore off the underwater kingdom because it couldn’t measure up. But as a self-described “creepy little kid” with big culinary plans, Lopez started to experiment herself,  grabbing odds and ends from the pantry—eggs, Sazon seasoning, cilantro— to mix together in a pan and serve to her family.

Slowly, she grew into cooking whole dishes, ultimately taking over for her mom most of the time. By the time she was 12, she was cooking most of the meals at home. Often her mother would get home late, and she started leaving still-warm meals on the counter, “for her not to come home hungry.”

“It happens to me because I have two jobs now,” said Lopez. “I work a night shift and get home around 11 p.m. and I’m starving. It’s really nice to have food ready for you, so you don’t have to stay up longer to make your own food.”

From taking over cooking operations in her home at 12, Lopez went on to teach her older sister how to cook a few years ago, when she got married and confided in Lopez that “I gotta know how to cook this.” Her new husband—and Lopez’ new brother-in-law— talked a big game about his culinary Ecuadorian heritage, but “that man did not know how to cook for nothing.” 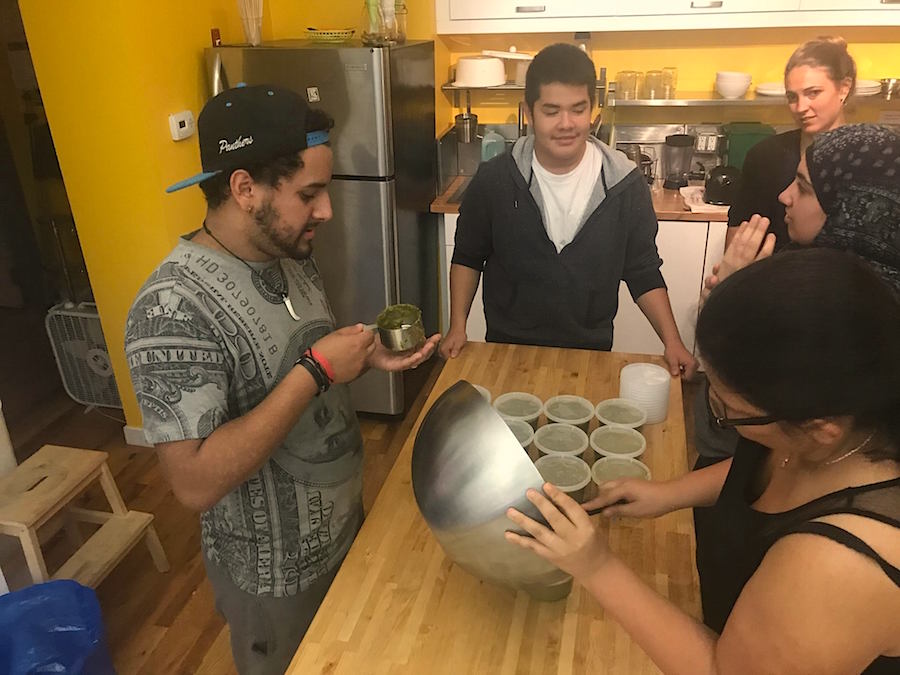 Lopez set aside time for sister-sister cooking lessons, rolling out recipes like a ground beef bacon roll that she said her sister has now almost mastered on her own. Then she turned toward her own interest in cooking, connecting with the New Haven Land Trust through New Haven’s Youth@Work program. She jumped onboard with the Growing Entrepreneurs program just as it was beginning in 2016.

Sofrito wasn’t on the menu at first. Her first summer, she and four other entrepreneurs built a fence for the Grand Acres farm on Perkins Street in Fair Haven, and then worked on composting and raised garden beds. Then last summer, Lopez realized that there was a surplus of green peppers in the garden.

It was around the same time that her cynicism around store-bought products was mounting. So she made a pitch to her cohort of entrepreneurs and supervisor Esther Rose-Wilen: developing a food business around an essential taste of her childhood and adolescence, that was sourced 100 percent locally.

“We got you,” she said. “We tell you the process from planting the seeds to transplanting, taking it out, how we made it, and all that. You literally know that it’s local, fresh and organic.” 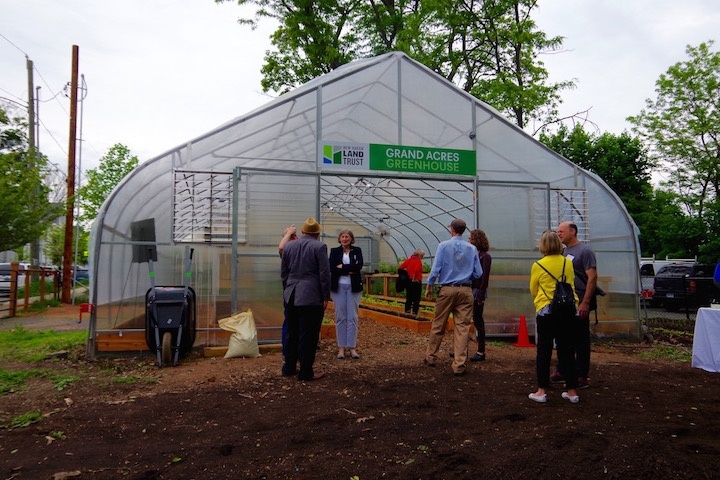 The cooking was only part of the venture. After she normalized the recipe—green bell and cubanelle peppers became her fast friends in those months—she also learned how to balance finances, make nutrition labels, and abide by health department regulations. She moved operations into the CitySeed kitchen, splitting washing and chopping duties with her peers.

Since beginning the business, she has sold batches of sofrito at local farmers’ markets, the regulation for which has been easier than local grocery stories. With her cohort of entrepreneurs, she’s expanded that product line to include kale pesto (lemon, lemon zest, walnuts, kale, olive oil) after an excess of the leafy green in the garden last year.

“It’s not just that you’re providing food for the community,” she said. “You’re getting something towards yourself.”

But she also has her eyes on the future. After she graduates and completes her ServSafe training this year, Lopez wants to pursue the culinary arts full time, ultimately attending the Culinary Institute of America (CIA) in New York and owning her own restaurant. In the fall, she is considering heading to the culinary program at Gateway Community College.

She knows what she wants for it, she said. A New Haven storefront, with red, black and white patterning, a garden out in the back and a jam-packed menu of all her favorite dishes. To plates already in her wheelhouse—rice, tacos, burritos, lasagna—she said she wants to add new recipes reflective of the city’s diverse population.

“That’s tacky,” she said. “It has to be something. Or people won’t remember it.”