Just Don’t Call It A Beat

Eric Rey was deep into the singsong of his djembe before the drum’s phrases had even finished ringing out across the room. His whole body leaned in, shoulders and back at a sharp angle as his palms spoke a language for which they weren’t yet words. Around him, three pairs of brown, soft but weathered hands joined in, hammering out the heartbeat of a homeland.

Thursday night, Rey and members of Healing Drum graced the Connecticut Center for Arts and Technology (ConnCAT) as part of “Black Music: The Fabric and Soundtrack Of Our Lives,” a four-part series for Black History Month. After opening with a session on the history of New Haven jazz last week, “Black Music” continued with a two-hour dive into African drumming. 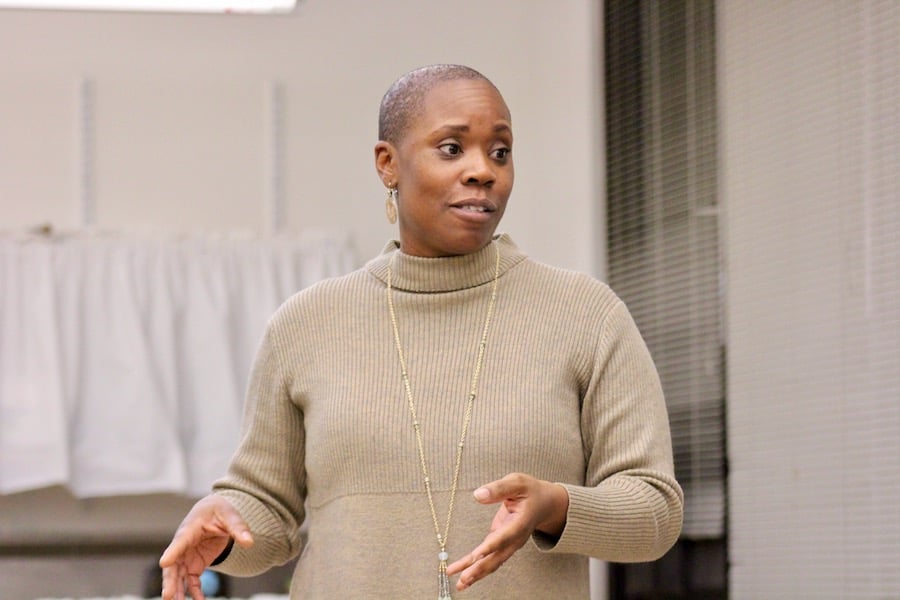 The series started as an idea in December, when ConnCAT Chief Operating Officer Genevieve Walker and Executive Director Erik Clemons found themselves talking about Marvin Gaye’s album What’s Going On. The two zeroed in on how topical the words seem almost five decades after they were written, how “that piece itself points to how bad things are.”

A series soon materialized. But Walker said she didn’t want to start and end it with What’s Going On. She wanted to give a bigger picture, vibrating with jazz and hip hop, rich history, and tributes to the African diaspora.

“I wanted to be encouraging and engaging,” she said at the event. “Before we dive into the bad stuff, let’s do something good. And historical—it’s still doing the work it needs to do.”

Performing for an intimate audience, drummers ushered in an evening that was part jam session, part time travel, and part history lesson. As Rey took his seat—a place he never seemed to stay still for very long—he gestured to the drums laying before him like offerings, their bright paint and taut, rawhide drum skin yellow and shiny in the light. Like Smith and Gray, he is a Djembeföla—a master drummer who is also a teacher. 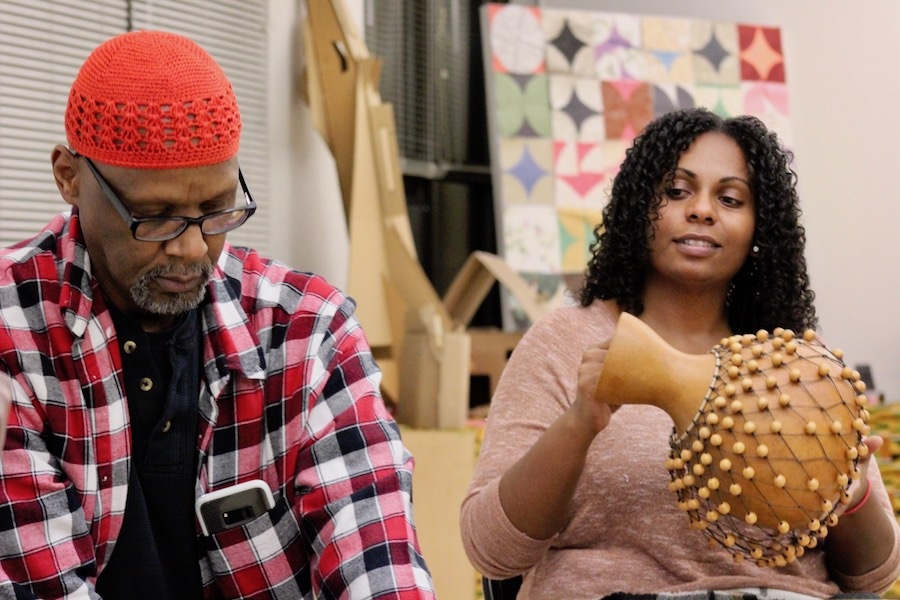 Smith and Marcano. The drum Marcano is holding is the shekere.

These are the tools of his trade, he said: the mortar-shaped djembe, wider, painted dunun, smaller sangban and dainty but powerful kenkeni, originally linked to the Mali Empire in West Africa. Later he would bring in the shekere, a hollowed-out gourd with delicate netting and wood beads. As he introduced the instruments’ names—“there will be a vocabulary quiz at the end of this,” he joked—fellow drummers joined him to demonstrate how each had its own language, a sometimes wordless thing that would always rise up to meet other voices.

Like a string of phrases meant to celebrate a woman’s first period, woven together to create a celebratory, propulsive call-and-response. As Smith described the ritual, reserved for “women coming into womanhood,” he began to drum, his fellow drummers joining in as attendees sat upright and rocked to the rhythm. In the front row, Walker clapped along, her young daughter joining in after catching the sound as it soaked the room.

In those pieces, and between the drummers’ hands, was a deep history. One comprising what Smith called a “pantheon of rhythms” that had been taken forcibly away. Of cultures across a continent that imperial forces tried to strip bare and beat bloody. Of a resilience that defied the limits of human strength. 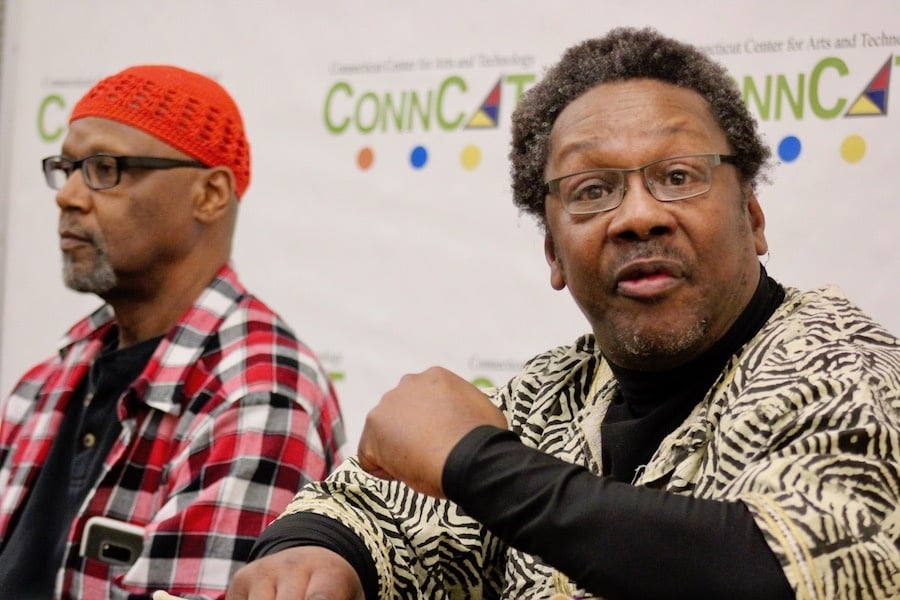 So it was natural, Gray said, that there sprang a new musical language in America, growing its roots in the then-nascent Black church and the many lands across which the diaspora scattered people.

“They took our drums away so we did this,” he said, clapping quickly as he beat his chest and stomped his feet in a hard, resonant staccato against the floor. “I don't know—that look like church to me. I continue to be excited by what we’re doing here in America.”

Something else happened too, he continued. The drums changed form, and morphed as the African diaspora spiraled out, then found thick cultural webbing in the United States. Instruments descended from the Mali Empire took new shapes and phrases as they came out of Cuba, Bolivia, the Dominican Republic. The phrases that had once marked rite and ritual laid the foundation for jazz, contemporary Afro-Cuban drumming.

“Africa, where we come from, that’s the cradle of civilization,” he said. “Everything came from this.” 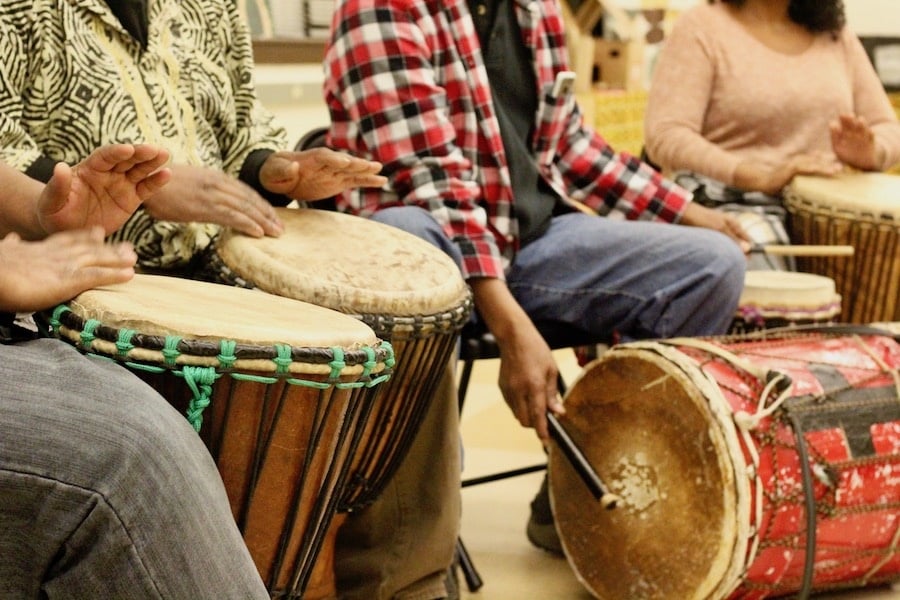 Gray said he has lived that fact for his 60-plus years in New Haven. As a kid, he didn’t have drums, but he did hear rhythm beckoning. So he and his friends improvised, drawing on a history of elders who had been doing that for hundreds of years.

“As long as I can remember, I was playing drums in the backyard,” he said. “We used cardboard boxes and coffee cans. Those are traditions as important as other traditions. We didn’t know the words so we created out own.”

As Gray grew older, he met a now-storied New Haven Djembeföla named Paul Huggins, a local drummer and teacher who died in 2014, at the age of 77. Huggins told Gray that he didn’t have what it took to become a great drummer, and that he should try dance. Then when Gray took up the Conga drum, Huggins suggested he try something else.

Gray said he’d lit a fire in him that pushed him to become great enough not only to drum, but to teach. That New Haven had also given rise to players like Bill “Billy” Fitch, a conguero whose skill rivaled Poncho Sánchez and who “kept it in the community.” 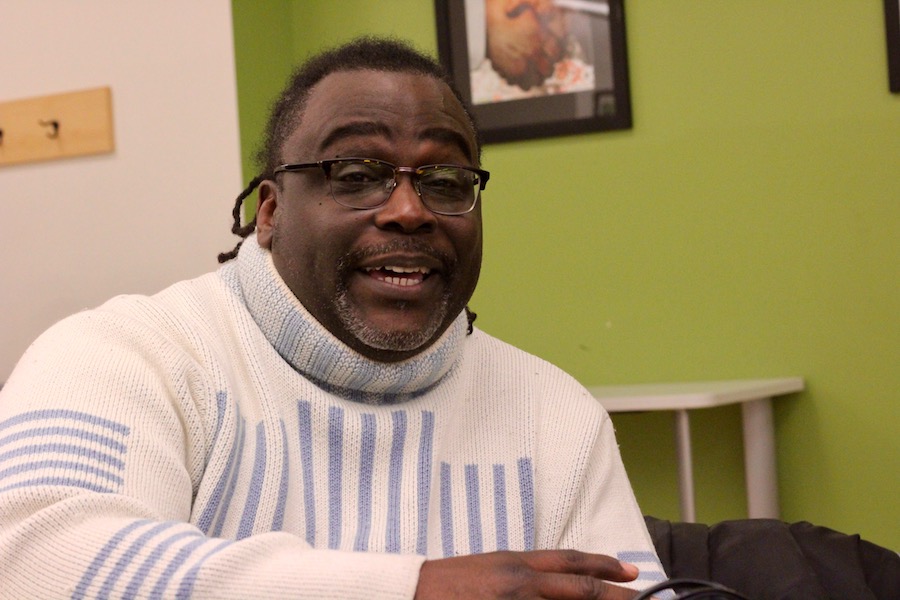 Steve Driffin: What about the youth?

But they also discussed something that worried them—a lack of interest among New Haven’s youth, who aren’t interested in drumming. Smith said he tries to explain that drums laid a musical foundation for jazz, Latin dance, and hip-hop. That their early uses carry over to contemporary music. But when he’s knee-deep in that history, students ask him to teach them “beats” that they can mix into hip-hop demos.

“I don’t teach beats,” he said, drawing laughs from ConnCAT’s Youth, and Community Programs Manager Steve Driffin. “I teach them a drum phrase. You can walk around doing this all day.”

He beat his chest and continued. “It was taken from us so abruptly that we’re teaching it back to ourselves right now. These instruments talk to each other like you’re talking to a person.”

With that, they entered the final  stretch of the evening. Trading their djembe for congas, Rey and Gray kicked off the piece, their hands at a gallop on the taut drum skins. Something tinny, no louder than a cowbell, joined in. Then Marcano, with a response from her djembe.

A new drummer takes the wheel. Or, in this case, the phrase.

They communicated largely in a language of gestures: a glance here, a head bob there, a long look at each other. Marcano’s daughters ran through the room, pulling a few members of the audience to their feet while others clapped. The drums slowed, then trickled to a slow tap, then stopped in unison.

“This is part of the fabric of our life, which is music,” Walker said as drummers began to pack up, teaching a few curious students before putting their equipment away. “I hope we bring who needs to be here.”

“Black Music: The Fabric and Soundtrack Of Our Lives” continues next Thursday with the history of hip-hop. The series is free and all sessions are at ConnnCAT. More information on the organization’s Facebook page.