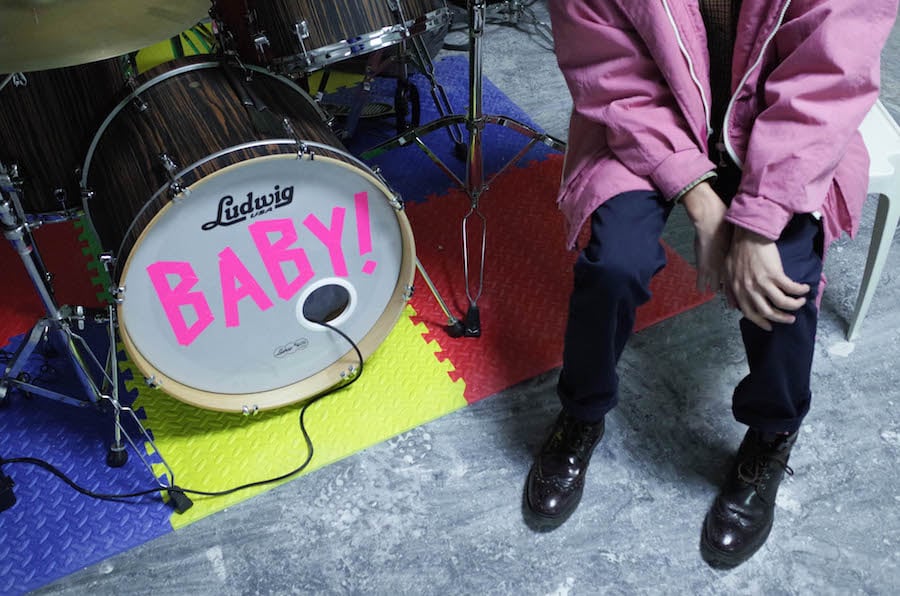 Chris Chew swiveled on his hot pink drum throne and reached to unplug his headphone cable. The cable had become tangled in a nest of wires running out of the recording box, a silver ingot studded with red and green LED lights and linked to Chew’s laptop via USB. A black microphone perched loosely on a stand above the Makassar wood drums, silent and squat atop a Persian rug. Beneath his herringbone button down, the collar of a pink t-shirt stuck out loudly.

He plugged the cable back in. He was ready to record.

A few rhythmic clicks and the song began. A buttery synthesizer played taut chords and a quiet, quavering voice mumbled the lyrics. One minute and seven seconds long—more of a sketch than a full track.

Chew had six hours to record the drums, finish the lyrics, add any additional instruments, and upload the song to his Bandcamp page. That, or he'd break a 25-day streak. On Feb. 1, he set out to write and record a new song every day of the month. Late last month, Chew, 25, a graphic designer at the Yale University Art Gallery and drummer for Boston-based band Baby!, was almost there with just three days to go.

“Chris [Chew] is a really, really productive person,” Kaley Honeycutt, Baby!’s front-woman, told me later that week. The month-long undertaking was an inspiration to her, she added. “It’s kind of all over the place, but that’s part of the project—to get all these ideas out there organically”

Back in his practice space, Chew launched into a thick rock beat, embroidering the song with snare and cymbal. Drums reverberated off the concrete walls of the spacious room. He changed the beat, playing the ride cymbal like a bell. No, that wasn't it. He stopped. The song continued to blare in his headphones. 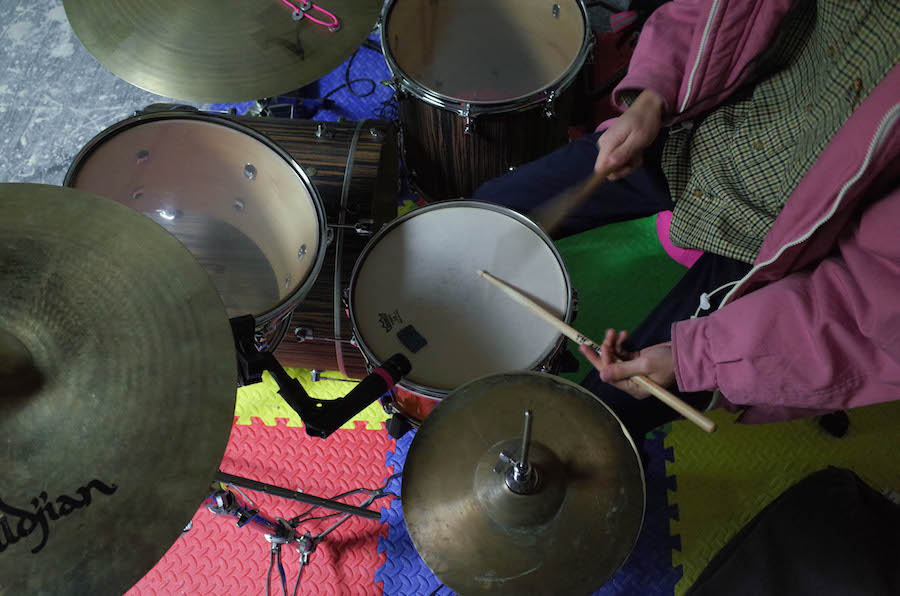 “I’m trying to figure out what the actual parts should sound like,” he said. “I have something in my head but it never comes out exactly the same.”

It should sound sort of shoe-gaze, he said, like the band Real Estate. On other days, he’d ranged across genre, from acoustic ballads to funky electronica to bedroom rock ‘n’ roll.

Another take, another style of beat: he was chugging along on the floor tom instead of the cymbal. The track became darker, fuller, more steak than sizzle. His headphones pushed a shock of thick black hair into an unruly headdress. It swayed in time to the beat. His black mustache hairs shook. He attempted a rapid drum fill—too rapid—and landing sloppily ahead of the beat, grimaced.

“Sorry if this is boring,” he said. “I’d probably be swearing more if you weren’t here.”

He started another take. And another. While he played, he kept his eyes trained on the floor between the drums. He recorded something he said he likes. But, he added, he wanted to try a few more times, just in case he could do better. 40 minutes have passed. After a final attempt at the drum track, he let his sticks fall loosely onto the snare membrane, which let out a sputtering sigh. He decided to go with the earlier take.

“Testing: one, two,” Chew deadpanned into the microphone. The drum kit had been disassembled and piled up in a corner of the room next to other mounds of gear.

During the week he shares the space with a few bands, mostly members of New Haven’s punk scene. Gaps in the ceiling tile reveal ventilation pipes and industrial wiring. Motes of chalky dust from the white sheetrock gather in the corners of the room. The room was not built with musicians in mind.

Chew adjusted the stand for his five feet four inches and draped a scarf over the microphone. Time for vocals.

He spent a few minutes tweaking the lyrics on his laptop. He drafted them that morning, and added lines over the course of the workday. The words are about being so reserved you become a cipher to the people around you:

Chew on his lyrics: “I’m not really good at making up stories."

“I’m not really good at making up stories,” Chew said. His lyrics are autobiographical, sometimes to the point of banality. One song from earlier in the month is a theme song for a friend’s cat. Another is about staying late at work. But like much bedroom music, the banality is tinctured with intense, even uncomfortable intimacy.

“I’m a dog who learned to fetch all by myself/no one here to take pride in me, I take walks by myself,” Chew crooned on the song from Feb. 17. It’s was like overhearing someone’s self-aware diary entries.

“I feel too young, I feel too old/Most cliché story ever told,” sang a chorus of Chews on his song from Feb. 6. He doesn’t agonize over the lyrics, he said. He said he wonders whether he should.

“Should I be trying really hard to make this really beautiful?” he asked aloud. “Break out the thesaurus?” When he talks about his process, his voice grows quieter than usual. You have to ask him to repeat himself.

He started the recording and spent a few bars humming along to the melody, finding it in his throat. Then he started to sing in a soft, warbling voice: “I get mad that they believe me/It’s my Fuck!.” The first time he’d sworn all evening.

A year ago, Chew said he never would have sung with me in the room. He picked up the drums in middle school, after his father purchased second-hand kit from a friend. Over the years, he picked up guitar, bass, and keys. But he wouldn’t sing, even at home—even if the house were empty—in case someone would walk in on him.

“I couldn’t physically bring myself to do it,” he said. Once he started recording his own music, he’d have to pack up his recording gear and drive until he found a deserted parking lot. Behind the steering wheel, he’d sing without fear of being heard. When I met Chew, recently, he’d just sung for a crowded room.

Back in the basement, he finished another take and listened to the playback. He laughed. “That’s probably fine.”

Later, at his apartment, Chew made some final adjustments to the mix, adjusting the volume, panning, and frequency of the instruments so they lay together evenly. He added a bass part to give the song a driving pulse, and a few vocal harmonies to strengthen the chorus.

He hadn't eaten since lunch. In February, he said that happened more than he would like.

“I’ll be so obsessed with finishing the thing I just wait to eat until 11 p.m.,” he said. But now, at 8:34 p.m., the track was finished, well before the deadline. He listened to the song a final time. He said it's hard for him to hear the final product, especially when he finds mistakes he can’t fix. But it’s not as hard as it was on Feb. 1. He’d rank this track among the better ones he’s made this month. The conversation drifted to next steps, to his aspirations.

“I don’t know what it means to be a professional musician," he said. "Can I just do this and put out albums every once in a while? I don’t know where it stops being a hobby and starts being the thing you do.”