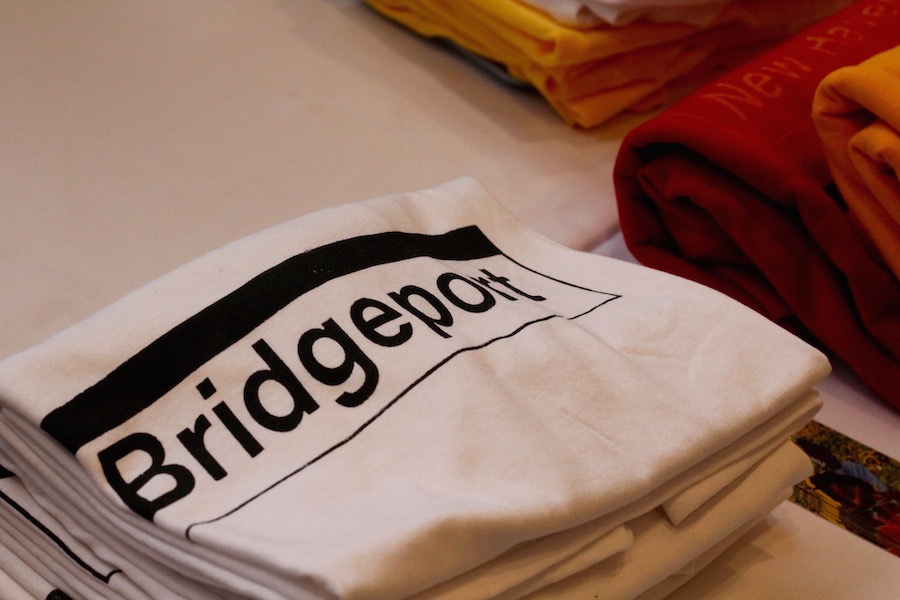 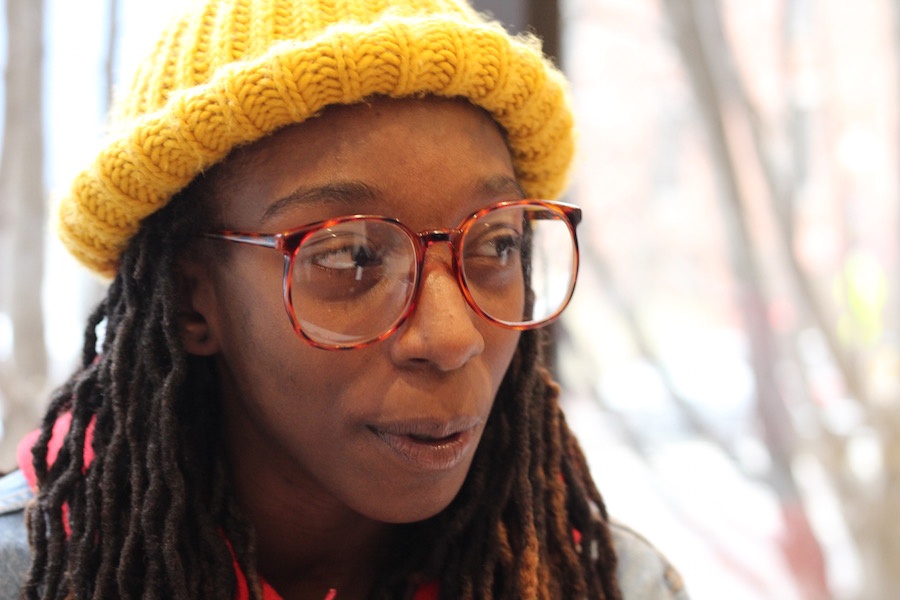 Netta: “So what I notice, especially in the music scene, sometimes everybody leaves Connecticut. And it shouldn’t be like that. I want to bring pride back to being from here. We did this here. This is just for you and I. This is for us.” Lucy Gellman Photos.

Sheneta Walker grew up hearing stories of multiple Bridgeports. There was the Bridgeport she knew each Sunday on Norman Street, flooded with sunlight and old-school gospel. The Bridgeport she saw as a public school student, when options like music and band weren’t available to her. The rough and tumble Bridgeport people warned her about as they rushed to the train from work, or sped by on their way to or from New York City.

She didn’t like hearing about the last one. And she had conflicted feelings about the others. So she decided to take the narrative into her own hands—and into a screenprinting studio.

Walker, who goes by “Netta,” is the founder of the “My City Initiative,” a small-batch clothing line that seeks to celebrate Bridgeport, Hartford, New Haven and most recently Stamford with t-shirts, sweatshirts, and dad hats (they are exactly what they sound like) bearing each city’s train logo in bright colors or punchy red, white, and blue stitching. Her kid sister Angelica Sistrunk has joined her as a collaborator on the brand.

After securing a $1,000 incubator grant from entrepreneurial startup Collab New Haven earlier this year, she has been able to expand the initiative, appearing at pop-ups and launching a website with goods for sale. That’s where she was earlier this week, chatting with Bridgeport educators at a hallway pop-up at the Holiday Inn Bridgeport as snow fell lightly outside. 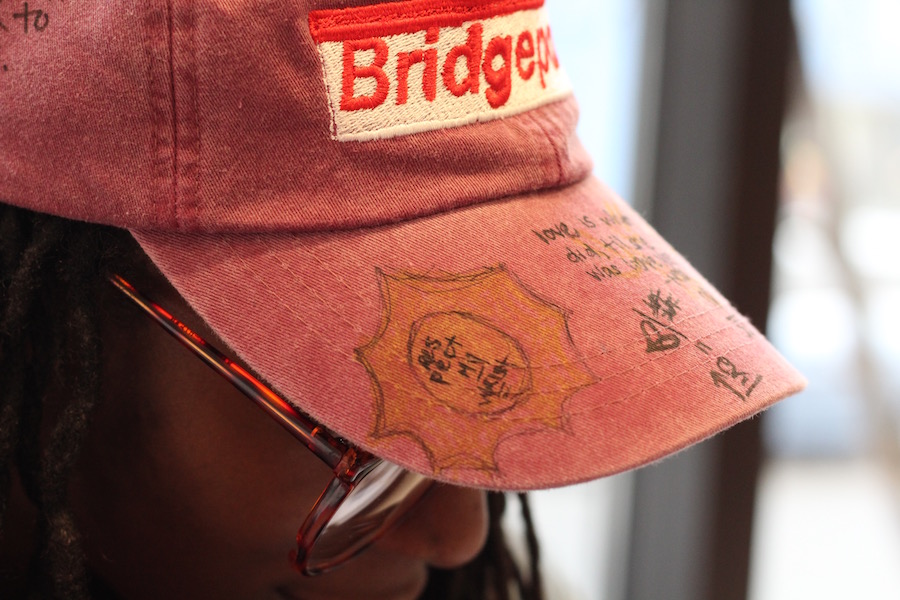 “I would say that I’m a full-time creative,” she said. “So what I notice, especially in the music scene, sometimes everybody leaves Connecticut. And it shouldn’t be like that. I want to bring pride back to being from here. We did this here. This is just for you and I. This is for us.”

“My City Initiative” started small two years ago, with a dad hat and a revelation. Working part-time in food service for the better part of 11 years, Netta was reaching a breaking point, where “I just got tired of wearing other people’s uniform.” At the time, she was on the Metro-North Railroad almost daily, commuting from her job at Brewport brewery to home in Westport to classes at Housatonic Community College. She would watch as the sign announcing Bridgeport—her city—whizzed by, or shifted back into focus at the end of a long day.

It was 2016, and the state had announced and begun renovations for the Bridgeport train station, to add upgrades like lighting, new electronic signage and extended canopies under which passengers could wait. Catching the last train home one night, Netta’s eye caught a station sign that was going to be discarded. It was a template she’s grown up seeing: a sturdy white background, with the word Bridgeport bolded in red across the front. She didn’t know exactly what she wanted with it. But she knew she wanted it. 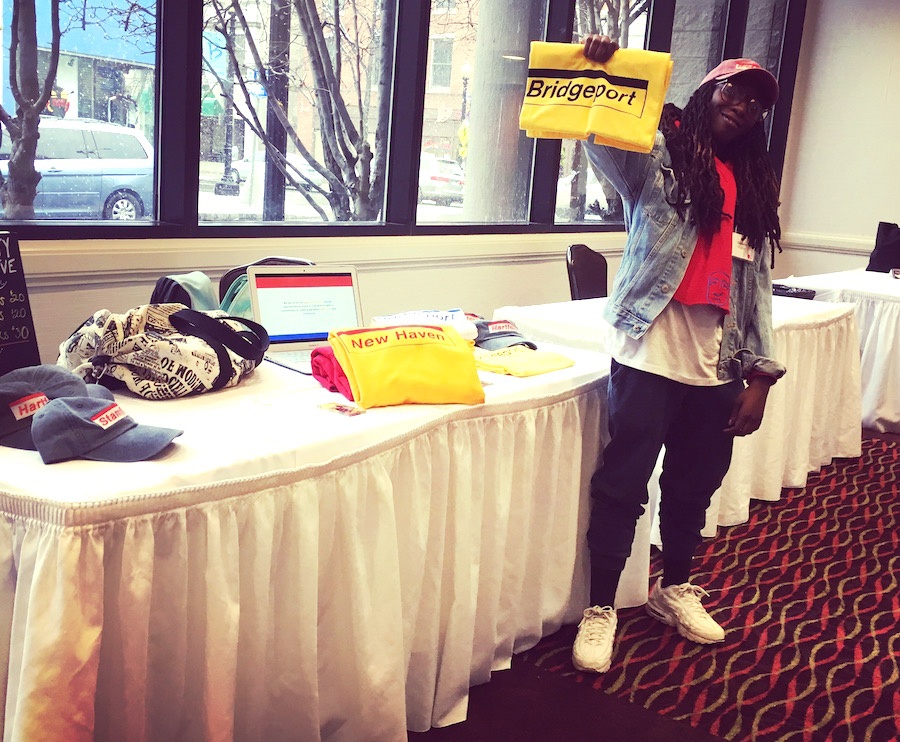 Netta at her table at the Bridgeport Holiday Inn earlier this week.

The clock was ticking. Missing the 12:30 train would mean that she didn’t have a way home. It had been a long day. So she scrambled to find a worker. A man named Eugene—she said she can’t remember his last name—emerged as she rushed around the station, seeing who might help her in those small hours of the morning.

She begged him for the sign. He told her he’d see what he could do.

Then she went home, and snapped back into her routine. She didn’t forget about the sign, but she didn’t get her hopes up, either. She hadn’t heard anything from Eugene since their quick exchange at the station. But when she walked into work for a shift the following month, her boss pulled her aside. The sign was sitting at the table like a totem. No note accompanied it.

Once Netta had the sign, she began thinking about what to do with it. During her years as a student at Housatonic Community College, she had become known for her hats: she was never without one, and fellow students started taking note. There were dad hats. Knit caps. Red hats and black hats and yellow hats, which she referred to in shades of crown-like gold. Winter hats and summer hats. It was an extension of her personal style: light or dark gray sweats or jeans, tucked into socks, a layered sweatshirt, round tortoise-shell frames and hat to top it all off. 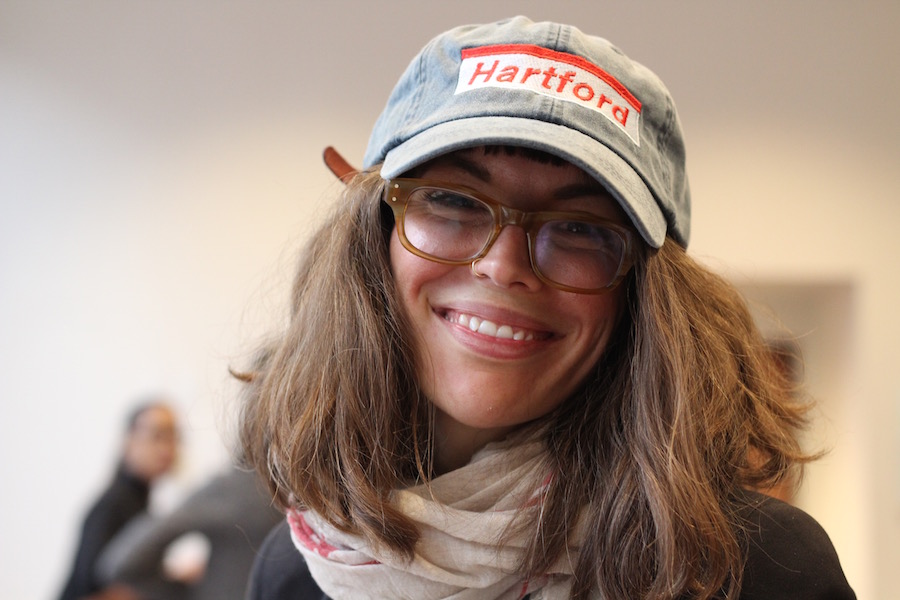 At some point, a friend suggested she design her own hat. Now she had the template to do it.

“I do all the reading on the monks and self-actualization, so I guess I’ve always been on a journey of trying to figure out how to be a full-time creative,” she said. “I had to find my happiness.”

Since taking the leap into the first dad hat—which became the first t-shirt, and then the first sweatshirt, much of the project has been do-it-yourself. When she realized she didn’t know how to screenprint, she asked an older mentor, the artist Jahmane, if he would pass on his skill to her. She enlisted her younger sister to help with the brand. She appeared at every pop-up she could around the state. Last fall, she applied for Collab New Haven’s first Incubator Program, an intensive designed for entrepreneurs, with a $2,000 grant attached. A recipient of the program, she said that she’s hoping to expand cities to Stamford, Westport, Waterbury, and Fairfield.

“I will say, I was trained right,” she said. “That’s from everything. Everything is crazy integrated into each other. Just seeing what you build … I’m going to keep doing this and smile.”

Now six months in, she said the brand encapsulates her experience—the good, the bad, the bittersweet—of growing up in Bridgeport, where she was raised by her mom. As a kid, gospel music set her soundtrack to the city, first with weekly services at Claytor's Ministry, and then a new church. As she became interested in making music, she grew into her own style, learning that even if she “first had to trick myself into being okay with my uniform,” it would ultimately fit like a glove.

All of that, she said, has gone into “My City.” In the brand are 26 years of personal history. A dad hat is never just a dad hat, but a triumphant vestige of over two decades in Bridgeport’s education system. Or a sign that an eviction and move when she was 17 years old didn’t grind her down, but made her more resilient. Or a symbol that a rejection of the church that never entailed a rejection of her spirituality.

“I don’t want to say that I’m a product of my environment, because I think that’s overused,” she said. “I want to say I am more so a result of broken systems. That’s what I am. And people like the results. So that’s why I’m going to bring pride back here.”

It’s an approach she also brings to her music. In a video for her recent song “After Twice, It’s Begging,” her gray Bridgeport dad hat fits tightly on her head as she moves with the lyrics, jogging up the steps to Bridgeport’s now-renovated station, and passing through the double doors.

“She asked do you pray/Every day especially like today/ I don’t go to the club on Tuesdays/I don’t ask for the why, on whose name?,” she croons. Around her, Bridgeport blooms into spring, wrapping itself around her bright clothes for a big city bear hug.

“Friends laugh when I ask that’s who playing?/Lupe?  And this song is how old?/I’ve been living in the basement a long time.

Her locks bounce ebulliently against the air. Hands hug knees, swing at her sides. She is in her city. And she is, in every sense of the word, home.