“That Was My Peace” 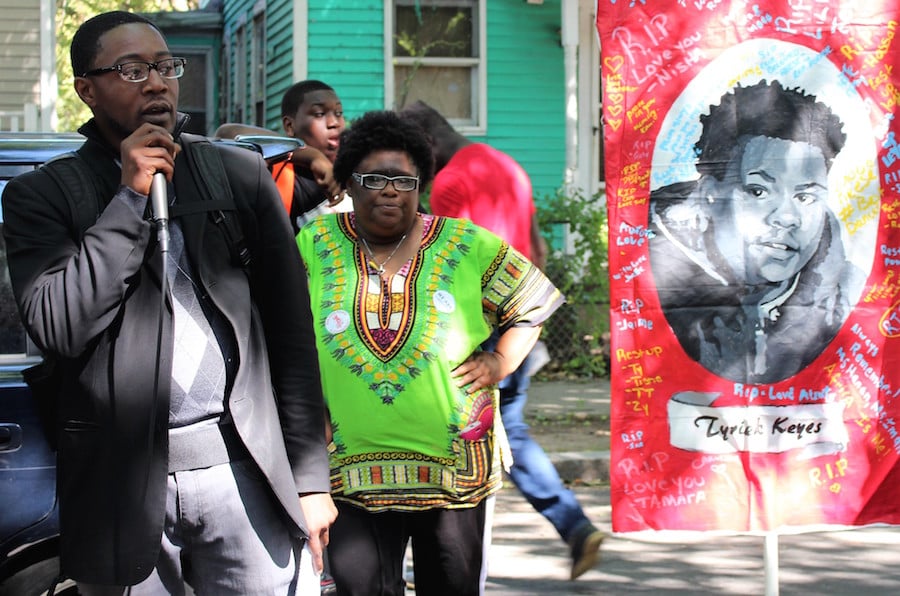 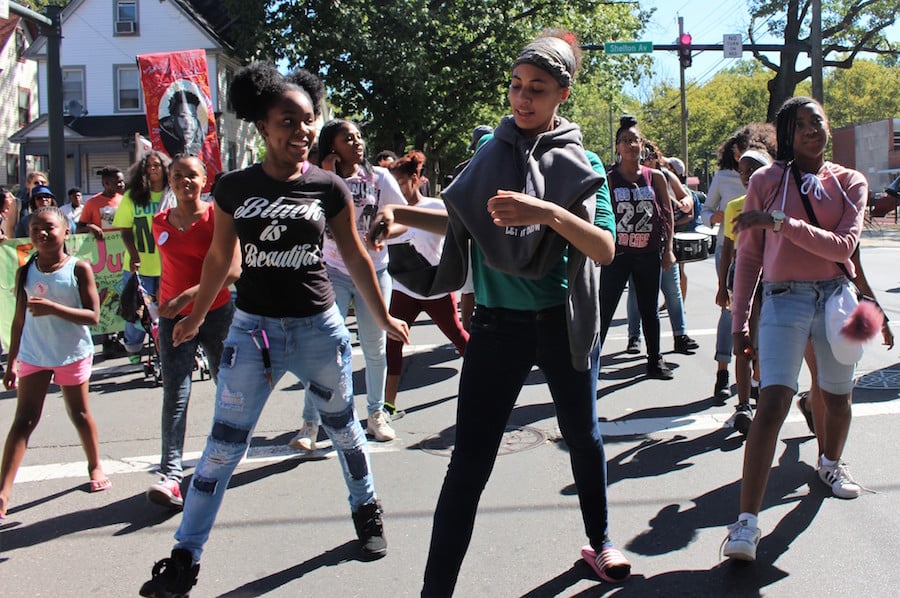 Young dancers from Ice The Beef Youth at a march for jobs last year. Thomas Breen File Photo for the New Haven Independent.

There’s a distinct sound to Sherman Parkway on Tuesday nights. It starts at a hum, an inkling of a two-step, where the parkway spills out onto Goffe Street near James Hillhouse High School. It gets louder as you come up against De Gale Field, where a humble brick building sits unassuming. Inside, you’ll find a crew of artists, orators, and peacemakers that comprise the anti-violence group Ice The Beef.

On a recent Tuesday, the building buzzed with activity. Dozens of high schoolers lined the bare walls, diving into scripts, sheet music, and dance routines. In one corner, four boys ached with laughter as they struggled to synchronize their choreography, a routine that had no music to fall back on. From another, Ice The Beef’s girls singing group The Harmonies cast unimpressed glances at their classmates, dissolving into laughter as they started practice on a few of their devised pieces.

Other parts of the building sprang to life. Shawn Sufra and Javione Hines practiced soul-clutching Negro spirituals, followed by Mmmms so sincere you thought you were in church. Down the main hall a young man transformed into Martin Luther King Jr. delivering his “I have a dream” speech. Somewhere in the bowels of the building, a team of New Haven Public School students prepared for a debate at Yale.

Ice The Beef was founded in 2011 by Darrell “D-Russ” Allick, a former drug dealer and gang member who turned to nonviolence after the fatal shooting of his younger brother, Donell. At the time, the city’s murder rate was climbing, and Allick saw a powerful opportunity: Pull young men and women out of gang violence with discussions on circumstance, loss, and bereavement.

Get them, in other words, to “ice the beef”—cool the conflict—with each other and focus on the vibrant, lived lives around them. As the initiative took off, it gained the support of the city’s public schools and then-mayor John DeSetefano. By mid-2014, the group had secured a location in the building on De Gale Field, owned by the parks department.

That was its origin story. When Chaz Carmon was asked to become president of the organization almost four years ago, he had one request: “Save ‘em first!”

At the time, the program focused on bereavement and healing. Carmon had a different idea: prevention through creative expression. A professional actor, he saw a strong connection between the arts and preventative anti-violence initiatives—young people were less likely to engage in violence if they were engaged in the arts, and collaborating with each other.  Instead of mourning together, youth began to make music, write speeches, and devise choreography.

It was the beginning of Education and Staged Arts, now one of Ice The Beef’s flagship programs. Four years in, Carmon said the program has confirmed his belief that “You don’t have to come in with a talent, you can come in and just hang out.”

As he spoke, a wall of sound rose up to meet the words, dozens of students hanging on and hanging out to the words of Sam Cooke.

At these weekly meetings, Carmon manages to shape-shift, often in multiple places at once. On a recent Tuesday night, he found himself working with young orator Geronte Hooks. Hooks stared into Carmon’s eyes as if they held the Constitution within them. Carmon started back, tracking Hooks’ every gesture and breath. The words of Martin Luther King Jr. thundered through the room.

Hooks was rehearsing the I Have a Dream Speech with all the resonance that Brother Martin dreamed of. Until suddenly, he was lost.

Carmon nudged him on. “Now try again,” he urged.

Geronte began again. This time, when he began to falter, Carmon joined in from memory.

“Somewhere I read that the greatness of America is the right to protest for rights!”

Hooks brightened. “I got it, I got it,” he assured Carmon. Twenty minutes later he returned with the confidence of Martin, Malcolm, and every revolutionary who made it possible for him to stand with the words, and recite them.

Carmon said he is drawn to speech; oratorical competitions are a staple in the program’s success. “I really want them [students] to be able to use their words,” he said. “You have to find those words.”

The group’s program ‘Youth and Government’ is meant to guide students through that process, with rehearsed speeches and debate competitions around New Haven and the state. Last year, students presented in 64 competitions, bringing home awards from several of them.

One student, Ariana “Ari” Rivera, even caught Mayor Toni Harp’s ear. It was as she told the story of her own life— which came to a halt when the life of her friend Tyrick “Reese” Keyes was cut short by gun violence last summer. Reese was a dancer with Ice The Beef Youth, beloved by members as he took on choreography about gun violence, and devised a piece memorializing Mike Brown and Trayvon Martin.

“I probably took it harder than everyone else.” Carmon said, recalling how the murder of the 14-year-old forced the students of Ice The Beef to come face-to-face with the discussions they often had in their “circle time,” where they talked about personal struggles and accomplishments.

Carmon submitted a request for therapy to City Hall, a process that some of his students still go through today. He said he watched as Tyrick’s death brought some students together, and even inspired his friends to join Ice The Beef. But Ari it was a different story.

With Keyes’ sudden and untimely death, a great weight settled on her. She struggled to get out of bed, each day. She stopped coming to rehearsals. She was, in her own words, “letting life throw me off,” until she couldn’t imagine doing anything at all.

But when she returned in January of this year, she said it was as if she’d never left—and never wanted to leave again. “This is my safe place…I need it,” she said.  “This is performing, something that I’m passionate about but really have to get back into.”

With the support of Ice The Beef, she’s taking classes at Southern Connecticut State University (SCSU), with her eye on a full-time degree and doctorate of social work. She’s in another program called GEAR UP, focused on early access to undergraduate programs.

She credits Ice The Beef with pushing her to do that. Recalling her best performance yet, Ari time-traveled back to a competition at which she had been struggling, and refused to perform. Carmon had urged her to go on.

Ari left her cellphone with her self-produced track onstage. Carmon wasn’t having it: He introduced Ari and played her track.

Ari took the stage. Sitting front row was a childhood friend she could never sing in front of, even when he pleaded. She channeled Carmon; she found the words. By the end of the song the only pleas were for an encore, and the celebration of what would become her best performance yet.

“We need Ari for everything, everything,” said Montrel “Monty” Rogers, youth vice president of Ice The Beef. “I’m a DJ, actor, model, somewhat of a singer,” he added—and Ari makes him better at all of those things.

Monty’s swagger softened and gave way to the story of his genesis with Ice The Beef. Although he knew  members of the organization, his membership began when he sought solace after Tyrick’s passing. It’s just one of the things that made him fast friends with Ari, and several people in the group.

“I can do it for him now. I perform for him,” he said somberly. Recalling that the young artist was “everyone’s little brother,” he said that  Reese’s passing brought a new mission to his art.

“It basically made me whole again,” he said. “Coming here was my safe haven, it’s mostly everyone’s safe haven. This was my peace.”