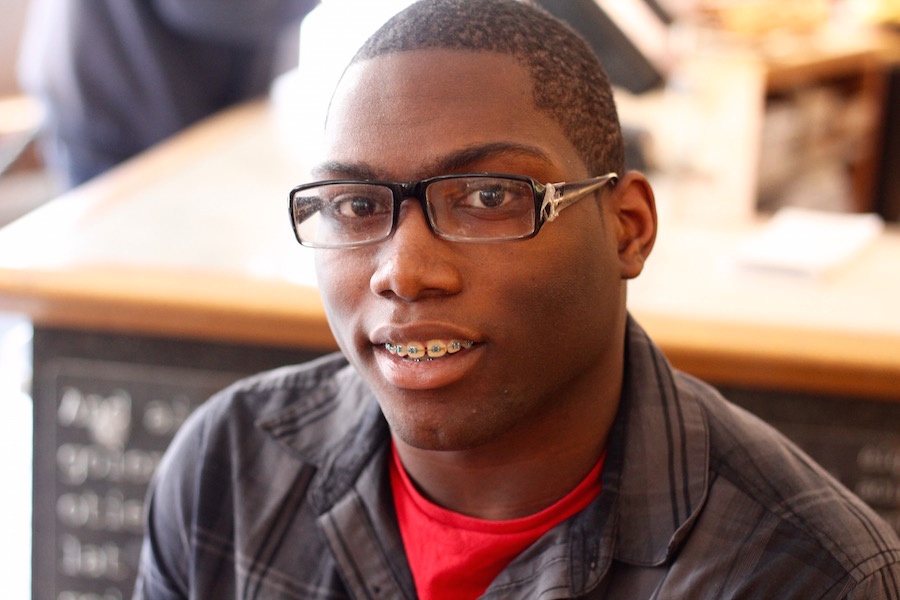 First it was J.K. Rowling. Then it was Philip Pullman. Now MarQuel Woods is hoping to see his own name on a book jacket—as soon as the chapters get the jumpstart they need.

He may not have to wait that long. This May, the junior at Cooperative Arts and Humanities High School (Co-Op) is headed to the New England Young Writers’ Conference (NEYWC) at the Bread Loaf School of English in Middlebury, Vermont. While he’s there, he’ll be working on a novel that he’s had in his back pocket for over three years. He received his acceptance earlier this week.

According to his teachers, he’s one of the first New Haven Public School (NHPS) students to attend the conference, which took 160 out of over 400 applicants this year. On Tuesday morning, a representative from NEYWC confirmed that while it regularly gets applications from New Haven’s Hopkins School, Woods is the first NHPS student to attend in the past two years. They did not have records for the conference’s 35-year history.

Woods started writing when he was a kid, first at home and then as a student at Celentano Biotech, Health, and Medical Magnet School. He was drawn to books built around fantasy worlds: J.K. Rowling’s Harry Potter series and Philip Pullman’s His Dark Materials trilogy, then Cassandra Clare’s The Mortal Instruments. When his teachers gave out a quiz on future professions, he gravitated toward writing.

“I just really thought about it and thought about what I loved to do,” he recalled in an interview at Atticus downtown earlier this week. “And I just made the connection that I should maybe explore writing.”

That bug goes way back, snaking through Woods’ 17 years to his youth in New Haven with his mom, Shaneka. Woods was a quiet kid—he recalled having a soft voice, so much so that teachers and family members often said they couldn’t hear or understand him unless he repeated himself. As a kid, he started writing out letters to his mom when they fought, a suggestion she came up with for him “to put my feelings down on the page.”

“I would be frustrated because I couldn’t really speak up,” he said. “I would just write that frustration … she just wanted me to convey what I was feeling, and what I thought, and to kind of take it in on her own.”

As those letters opened new lines of communication at home, so too did stanzas and free verse at school. When he was in seventh grade, he began writing poetry, first with a homework assignment titled “You Ask Me Why I Read” (“So you ask me why I read/I think it’s quite clear/You still ask me why I read/Then maybe you should read,” it ends), and then as a way to unlock emotions.

By the end of middle school, he said he knew he wanted to make fiction into a career. But poetry let him explore his emotions in a way that dense, action-packed paragraphs of text and fantastical worlds never did. Beside almost each poem that he wrote, he would add a date, and a few notes about the way he’d been feeling as he wrote it.

“I just dig deep inside of myself and I think about how I’m feeling at the moment,” he said. “I just focus on that … with my poetry, that can be my trademark. Being brutally honest and emotional.”

But “I’m a fiction writer,” he added, his face tightening just for a moment. “That’s my passion. Poetry is more for my emotional state and especially my emotions and my opinions. Fiction is more for creativity and for me.”

It’s an art that he’s trying to live out in the little free time he has outside of school. Three or four years ago, he began mapping out his own novel, inspired by the books he was reading. As he storyboarded, drawing on worlds of wizardry that so moved him, a plot emerged: A nature-loving people, hidden away in their own world, with the power to control life and death.

As he ironed out the plot, two protagonists jumped out from his mental woodwork—quiet, merely mortal twins, thrust into a magical landscape to discover the secrets of their birthright.

Woods continued his novel through middle and high school. As he wrote in bits and pieces—the novel is not finished, but coming together, he said—action-packed scenes turned into chapters. Moments that he’d dreamed up became inciting incidents. Even as the book was still largely confined to his imagination, it grew legs.

Then in September of 2017, that world and this one came to a screeching halt.

Late in the month, his mom was struck and killed by two cars at Ella T. Grasso Boulevard, where state routes 1 and 10 intersect without a pedestrian signal. Woods spiraled into what he called “old habits”—he withdrew from his peers and his family, procrastinated on assignments, and remained quiet until the silence threatened to bubble over, and he lashed out in frustration. When he didn’t write the feelings down, he found himself at loss for words.

“I was kind of lost for a while,” Woods said. “I had to take it out on my family a little bit, and I just kind of distanced myself. I just kind of backtracked to a lot of progress that I made during the years.”

But he continued writing, crafting two poems around his mom’s death that he said helped him explore the grief he was feeling. At a recent PenJunction—meetings of Co-Op students who are interested in writing—he stood up to share one.

“He didn’t really talk about it, and then he was like: ‘I have something,’” recalled creative writing teacher Mindi Englart, who taught Woods in a journalism class earlier this year. “He comes out with this poem. It was like, this done poem. It was his way of being ready to say: This happened.”

“There are different parts of him,” she added. “He’s a mix of so confident and clear and so reserved and modest and shy. He knows what he’s saying, and ends up doing it really well. But it’s never why he’s doing it.”

Those parts have come together to keep writing, and a village of mentors has rallied around him. Late last year, a family friend named Paul Sabin recommended the conference for Woods. A professor of History and American Studies at Yale, Sabin had done the workshop when he was Woods’ age. It had been, he told Woods, a formative experience in his young life.

Woods applied, working through the application materials largely on his own as he pulled together references from his creative writing teachers and New Haven mentors. Having been accepted, he is now in the process of submitting the fourth chapter of his novel, currently titled “Energin,” that he will work on during his time there.

“He did that all on his own,” said Englart. “He makes things happen, quietly. It’s such a modest confidence.”

It’s one of Woods’ first times out of New Haven and Hamden, where he’s now living with his older brother. But he has his sights set on getting out of the city once again in a year, to either New York or California for college. The former, he explained, is "the literary capital of the U.S." The latter is where industry is, if he chooses to go into scriptwriting.

In the meantime, said he wants to use the workshop as a springboard—and bring the lessons back to his Co-Op creative writing classes with Englart, Aaron Brenner and Department Chair Judi Katz.

“I’m hoping to build myself as a writer and expand to new things, because I’ve never done a workshop like this before,” he said. “It’ll be away from home, and it’ll be kind of like a college experience.”

For Kelly Wuzzardo, who works closely with Co-Op through her role as director of education and outreach initiatives at the Shubert Theatre, he’ll add to those places what he is already adding to New Have—not only his words, but also a desire to quietly, warmly make things that much better for those around him.

For audio from a reading that Woods and other Co-Op students presented at earlier this year, click on or download the player above.